It wasn’t hard to fall in love with Konami’s Teenage Mutant Ninja Turtles: Turtles in Time when you were eight years old. The brawler allowed you to pick your bipedal turtle of choice and smash through a few memorable locales plucked from the television series. But eight-year-olds can also fall in love with Twinkies and Power Rangers. Most twenty-somethings leave those silly feelings behind.

Ubisoft Singapore recently repurposed the arcade title for Xbox LIVE Arcade. It features new visuals, a new engine, and various other special goodies in the vein of most downloadable special editions. I played it.

That is all I will say here. Hit the break for the review. 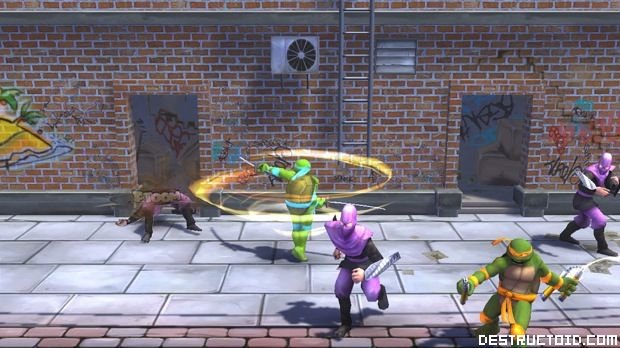 Konami unleashed the original game in arcades in 1991. It was a quarter-sucker, a basic brawler with cheap enemies possessing nonsensical and unbreakable looping attacks. Hot in arcades and on the television, the property was ported to the Super Nintendo Entertainment System in 1992. Serious changes were made — new enemies were created and the nasty sewer level was tacked on as a bonus — but it more or less resembled the memorable arcade title.

Flash forward to now, the year 2009. The title has made another platform hop, this time reborn as a downloadable title for Xbox LIVE Arcade (and PSN in November). It’s not a port by our definition, but you could argue that it is. Ubisoft Singapore repurposed the arcade version, creating a new 3D engine and adding visual touches, as well as fresh sound and attack animations. The original release is still alive in this version, which causes a bit of hesitancy on my part to call this a true “remake.” It’s more like a “Special Edition” — a playable homage to the original.

The re-shelling is a sore spot. This is a side-scrolling brawler, pointlessly re-tooled with a 3D engine. Its nature demands that it adheres to 2D, and it does despite the ability to attack in eight directions. Enemies still plod toward you in straight lines, but now it’s across invisible planes. There’s a measure of frustration associated with this. It’s occasionally hard to ascertain which plane enemies are attacking from. It becomes even more confusing when four turtles clot the screen along multiple planes. 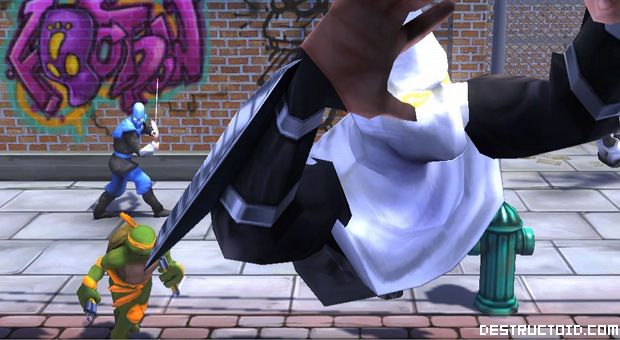 The combat is mundane and without nuance. There are four attacks: a basic melee, a special (basic) melee, an aerial melee, and a sliding melee. With the exception of the special attack, everything is activated with the press of a single button. Unlike Fable II, the basic button smashing does nothing for the game. There aren’t any combinations or special depression activations. There are, however, flourishes. You can grab an enemy by his ankles and smash him into the ground or throw him into the television screen, but these are random occurrences. This, coupled with the lack of even a basic combo, makes for a stale experience of the mindless variety.

Bosses don’t break the monotony, as they require almost no thought to bring down. The most advanced strategy you can use in the game is the jump attack, and let’s face it, the fact that a boss is flying is a big fucking clue to use an aerial attack.

One bright spot is the presentation. The two cut-scenes are wretched, but the actual game looks great. The turtles have a stylized appearance, almost akin to the new Ninja Turtles cartoon, while the environments are detailed and emit a warm, light-hearted vibe that fits the tone of the game. The enhanced music and sound effects are nice touches, although, it would have been great if there were more dialogue lines than, “Ouch my toe (or nose)!” 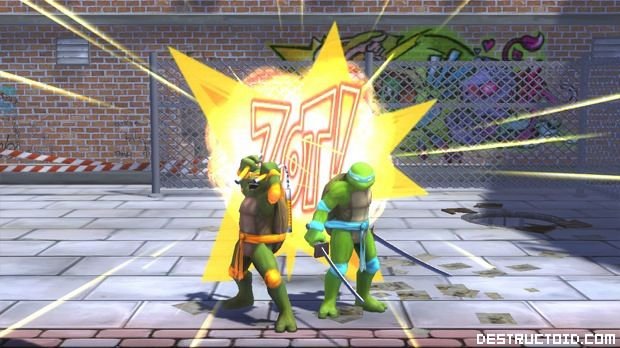 A special lashing is required for the Sewer Surfin’ level. There’s a reason it was tacked on in the SNES version of the game. It’s very arcadey, seemingly designed to snatch quarters. While you surf atop icky green ooze, a gamut of environmental obstacles — soldiers, red sewer urchins (or whatever), and swinging gates — present themselves in unavoidable instances. Response to the obstacles is difficult because the turtles move like they’re underwater, pushing against an invisible current. But the kicker is that whenever an obstacle knocks a turtle down, he can get whacked by another (and then another) while stuck in the recovery animation. This happens with bosses as well, and it’s endlessly frustrating.

Like most brawlers, this game is at its best when played with three other people over Xbox LIVE or locally. Enemies receive a bit of a health boost and bosses receive a fascinatingly larger one as a party gets larger. The looping attacks of bosses spoil the fun. More health means more time spent on getting caught up in a whirlwind of terrible. Not good.

There are no continues. A set number of lives is dictated by the difficulty level. This can be a bit of a bummer when playing with pals. Watching is not playing, but the good (and bad news) is that the game is short. I was able to beat it in less than 30 minutes on the easiest difficulty and within 45 with friends on the average setting. 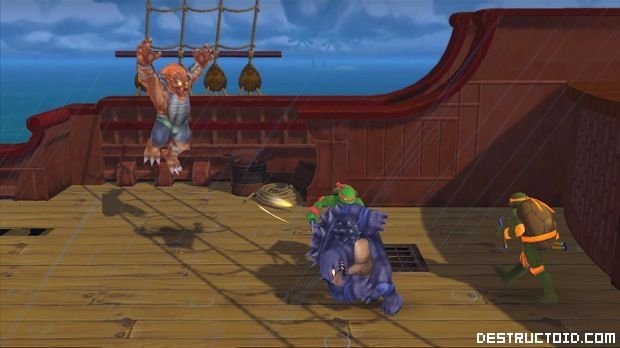 I don’t have an intimate connection with the source material, but memories did flood back to me in waves as I jumped from level to level. Unfortunately, nostalgia doesn’t operate in this game’s favor: it’s too faithful to the original. The broken levels, mundane combat, meager play options, and short play time are factors that dwarf the delicious presentation and whatever fond memories you may have. If you’re a Turtles fan, just remember the good times. There’s no reason to try to rekindle them with this.