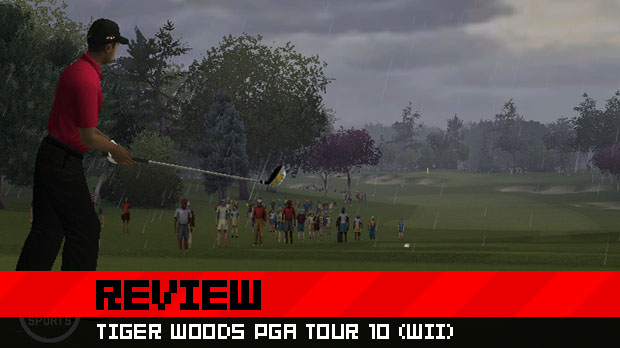 You wouldn’t think that a golf videogame would be a good platform to show off new gaming technology, but it turns out that Tiger Woods PGA Tour 10 is a perfect showcase for Nintendo’s Wii MotionPlus — so much so that the device comes packed in the box.

Nintendo’s Wii MotionPlus tech was announced and explained at E3 2008, but it wasn’t until the release of Tiger Woods PGA Tour 10 for the Wii this year that I fully appreciated the upgrade to the Wii Remote’s motion-sensing ability. Up until this point, I had no idea what the add-on did. And now I’m totally sold on what it does.

Hit the jump to read our review of Tiger Woods PGA Tour 10 for the Wii.

Up until the release of the Wii, golf videogames have featured timed button presses to determine club swing power and accuracy. When released, the Wii Remote provided some emulation of an actual club swing in some golf games, but this control method only served to make the limitations of the technology more apparent. For some games, you could swing the club over your head or behind your back and still make contact with the ball. This, combined with the need to use buttons and other controls to determine how the club strikes the ball, made for a control scheme that left me longing for the older, pre-Wii control scheme. Ultimately, older Wii golf games felt like the long way around.

I’m pleased to say that the addition of the Wii MotionPlus remedies all of issues that the older games presented. It all works so well in Tiger Woods PGA Tour 10 for the Wii that you find yourself thinking that this add-on was developed specifically for the golf game genre. Your club swing is represented on-screen, with a one-to-one representation displayed in real time on your television. Draw your club back and watch as Tiger and friends do the same. Pull it back halfway, and your character will follow. Even swing speed is accurately represented, in a way that you can both see and feel. Best of all, the Wii MotionPlus tech allows you to determine draw or fade. Twist your wrist inward or outward during your swing and see and feel results that you’d expect in the real world. Or something like them. These combined make for the most realistic-feeling golfing experience in a golf videogame ever. 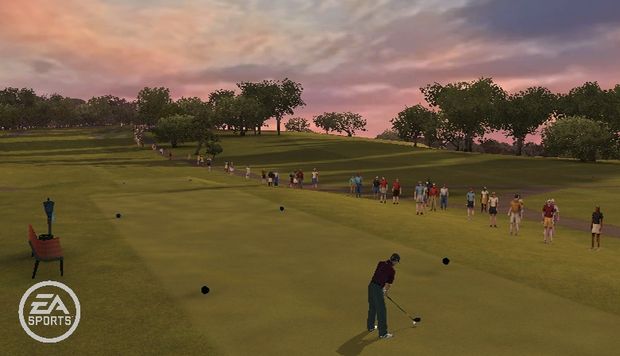 The best control would be nothing without a good golf game. Thankfully, Tiger Woods PGA Tour 10 has this covered, adding one of the most in-depth golf world simulations available to this already great control scheme. You’ll start out as a golf pro-in-training, working your way up the ranks of the PGA. Play as Tiger or any other number of pros, or create your own character, and then work to learn the deep control, much as you would as someone who is learning to golf. You’ll start off with a scheme that helps you out with visual ball guides and some aim assistance. Eventually you’ll move to a control that looks at your swing speed, strength, accuracy and follow-through, making for an engrossing and challenging experience. And now, for the first time, you’ll only have your sucky swing to blame if you don’t make the cut.

PGA Tour 10 also includes several online features. You can play online with four other players in the game and course of your choosing, or jump in for some full-blown tournament action hosted by EA. You can play against the pros, as EA tracks their stats in near-real-time. And how’s this for realistic: the weather tracked by the Forecast Channel is a selectable option, meaning your course can have real-world weather.

When you need to take a break from the sweat and tears of the tournament, PGA Tour 10 provides plenty of fun modes to enjoy, including more relaxed free play and party-ish golf-inspired minigames. The best non-tournament mode is a new addition, a frisbee golf mode. Working to incorporate this up-and-coming sport to the title, Frisbee Golf lets you toss the disc on all of the game’s courses. You hold down the B trigger to grasp the disc, making a flinging motion to toss it toward goal baskets on the courses. The control is spot-on, and the gameplay is simple yet insanely addicting. I’d go as far as to say that this “bonus” mode is fun enough to warrant its own game release. 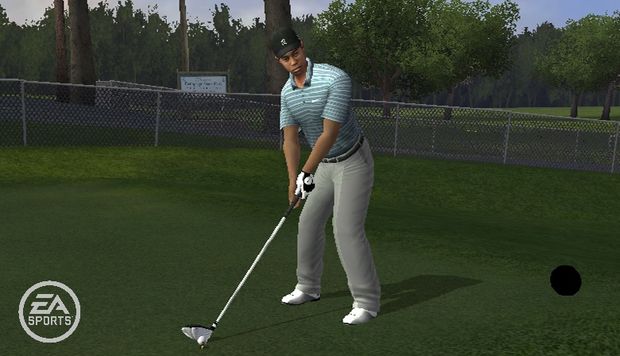 If there’s one thing to nitpick on as far as this title is concerned, it’s the in-game graphics. While the presentation and menu controls are slick and polished, character models leave a lot to be desired. Tiger is not looking so hot these days, especially in the face. The courses do the job, but also seem to be a little rough around the edges in some places. Overall, the courses are accurate representations of the real-world locations, but they’re definitely easier to appreciate from a distance. Up close, trees are blocky and ugly, and things like flag posts and borders lack detail. While putting in one instance, I noticed that the flag post was so jaggy that it looked like something out of an 8-bit game. I’ve definitely seen better looking Wii games, golf titles included. Don’t write off this fantastic game for its lackluster visuals, though. With as much fun as it is, you can live with an ugly Tiger and some blocky posts.

The Wii MotionPlus definitely makes the game. Tiger Woods PGA Tour 10 might not have been as good of a game without the added control sensitivity and accuracy, but now it has evloved to the point that I can’t imagine another golf game without it. The developers have taken this new technology and have polished it to the point that I have a hard time putting the club down. Simply put, you truly feel like you’re playing golf. I find myself doing post-victory fist pumps with Tiger. The end result of all of this is a ridiculously addicting game that also just happens to be a technological achievement, forever changing the genre. If you like golf, you have to get this game.