Thexder began life life in 1985 on the NEC PC-8801. Although regarded as a classic, the SHMUP never became a massive franchise. It gained international success when converted for the MSX system, and had a sequel called Fire Hawk: Thexder The Second Contract, but that was about it, and the series was forgotten.

Fast forward to 2009, and Square Enix has decided to revive Thexder as Thexder Neo on the PSP. Sticking to the original game’s roots, Neo sees players control a lazer-blasting robot that can transform into a jet and take on all sorts of mechanical foes. Is Thexder Neo a worthwhile revival, or was this one robot better left rusting on the scrapheap? Read on as we review the latest retro comeback. 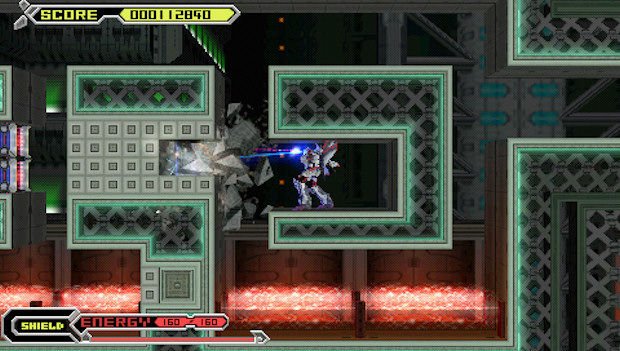 As with all retro games, the plot of Thexder Neo might as well not exist. For all intents and purposes, the story goes as far as you being a robot who fights things, and that’s really all there is to it. When you’re a transforming combat robot, I don’t suppose you really need a reason to kill stuff.

The retro feel of Thexder Neo doesn’t just end with the lack of plot. This game is an arcade shooter in all its unapologetic glory, and thoroughly old school in its design. There are no continues. There are no saves. There aren’t even any lives. When you play Texder Neo, you are expected to play it from beginning to end, and if you die, you’re starting again from scratch.

Like most SHMUPS, the game is challenging, but unlike other SHMUPS, Thexder Neo is less about skill and more about punishing you with bad design. Your robot can fire very thin and weedy lasers that automatically home in on enemies provided they’re near enough and your robot is facing them. Unfortunately, however, enemies move incredibly fast and bounce around the screen, making them hard to hit as they get behind Thexder and force the player to try and move a bulky, sluggish robot around the map in order to aim its weapons. Opponents also tend to absorb quite a bit of damage, leading for an incredibly frustrating combat experience on all counts. 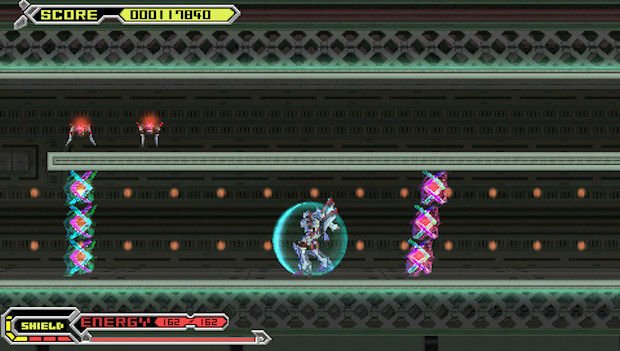 Worse is the fact that every time Thexder fires his weapons, his health depletes. Losing health from enemy attacks while expending that very same resource in order to fight is simply not fun. There are various objects around each stage that replenish or increase overall health, but guess what you have to do to get them — that’s right, shoot them. The whole game feels counter-intuitive, and this is before we get into the lava pits, electrified walls and opponents that hit you and then move in the same direction that you’re moving, draining your health for as long as they’re touching you.

The dedication to restoring the feel of the original game is commendable, but sometimes an old dog needs to learn new tricks, and Thexder Neo‘s outdated approach to hardcore gaming simply isn’t enjoyable. I’m all for a challenge, but I like a challenge that actually feels fair and balanced. Thexder Neo‘s draconian idea of difficulty may have been acceptable in the eighties, but better shooters have come along that don’t feel the need to punish the player and don’t pit a weak, slow and disadvantaged robot against speedy, tough enemies that require one to expend their own life energy in order to fight.

Thexder‘s big gimmick, that of transforming between a robot and a jet form, also falls flat, thanks to the fact that the jet’s controls are horrible. It’s unwieldy and impossible to fight with, and even with the ability to employ a temporary force-field, its use still leaves the player vulnerable and more than likely to steer right into a cluster of enemies. The only time the jet should ever be used is to squeeze through small gaps in the terrain, and the game would have been better served with just leaving said gaps out and never forcing the player to use such an awful, awful vehicle. 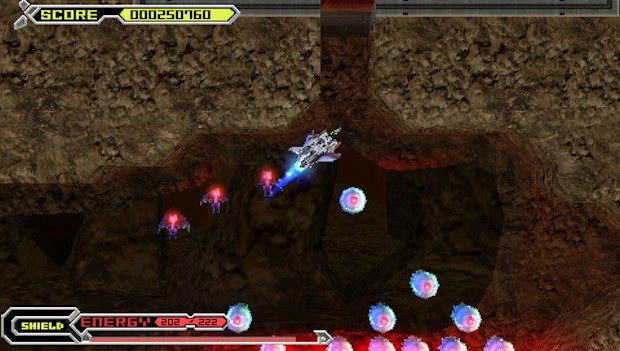 Outside of these issues, Thexder Neo is just a boring, bland, and unfulfilling shooter in a genre full of much better examples. If the gameplay was more compelling — if it had significant upgrades, interesting enemies or was at least more exciting — then maybe the high difficulty could be justified. As it stands, there’s just no reason to practice and get good enough at the game to navigate its levels. What’s the point when you could just go play Ikagura or many of the other better shooters that deserve the time and dedication they demand?

Thexder Neo also has an online mode, but don’t ask me what that’s like. I’ve tried to get into it and it seems that not a single person in the world is playing it. Wise people.

Ultimately, Thexder Neo has no point. It’s a below mediocre shooter that shouldn’t have been brought back if the developers had no intention of improving it. The premise of a transforming robot in a SHMUP environment has great potential, but not if you’re just going to re-skin a game from the eighties and leave it at that. It feels uninspired, the battles are repetitive, boring and unfair, and players will be better off playing almost any other shoot ’em up in the world.