The Warriors is the sort of film which should lend itself almost perfectly to a gaming experience. Its simplistic plot centered around eight gang members trying to cross New York City with every gang in the city looking for them practically begs to be made into a 2D brawler once you take out all of the running they do. It’s practically a no-brainer.

Not that this has stopped anyone from screwing up a licensed game in the past. Still, the prospects when you’re working with a license that already has a following, a distinctive visual style and a tale which is hard to do injustice to are decent. All that’s needed is a strong follow-through.

Can The Warriors: Street Brawl make it all the way home? Read on. 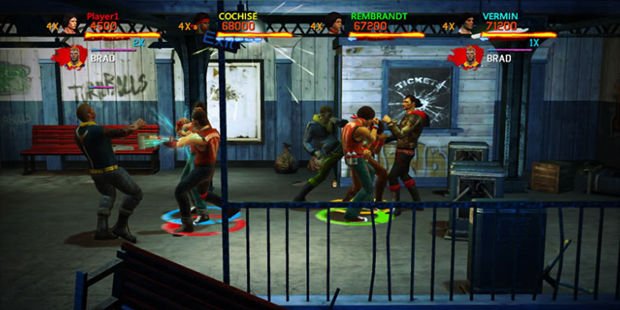 If there’s one thing that The Warriors: Street Brawl nails, it’s in the presentation. While it may not be the most visually appealing game, even amongst downloadable titles, it looks and feels like its source material. Character designs ring true with the gangs featured in the film and while environments are occasionally a bit sparse in the details department, they still manage to be decent representations of familiar locations.

Of particular note where the visuals are concerned is the manner in which the game’s story is told. Taking yet another page directly from the movie, the plot is progressed through a series of comic-style panels which capture the film’s art style impressively. While the movie would only use this art for transitions, however, the bulk of the story is given in dialogue here as well.

The interesting thing about the story is that, while it is not intrusive and can be skipped without any real consequence (especially if you’ve watched the movie), it’s really boring and throws the pacing of the game off. Dialogue moves slowly and there’s a surprising quantity of it for a tale which should be spending the bulk of its time either running from things or fighting them. The pace of the text can be sped up with a button press, but even that seems to take far longer than necessary much of the time, as there’s just so much text.

One nice little story-related touch I feel compelled to point out is in the game’s opening level. It takes place in the aftermath of the Conclave which sets off the city’s gangs. With police raiding the meet-up, gang members are fleeing left and right. These gang members actually appear in the level, running away, both in the foreground and background. They can optionally be attacked if they cross your path, and will retaliate in combat instead of running away. It’s a little thing, but rather cool in that it helps convey the chaotic circumstances in which we find our heroes. 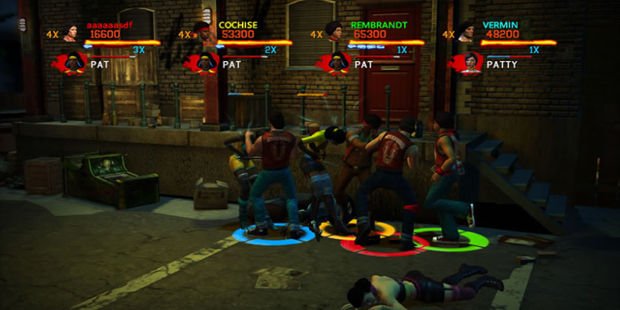 In your quest to reach Coney Island, you can choose between six of the Warriors. Swan, Rembrandt, Vermin and Cochise are all available from the start, with Ajax and Mercy available for unlocking. Apart from physical appearance, they supposedly vary in their health, attack power and speed but I’ve not really been able to tell a significant difference in anything except for health.

Combat is organized simply enough. The controller’s four face buttons perform punches, kicks, jumps and grabs, while shoulder buttons serve functions such as blocking and running. You can combo up attacks in chains (though there does not seem to be a whole lot of variety to them) and successfully running up a chain will build your character’s “Rage” meter. Rage can be used to activate crowd-clearing special attacks or give you a temporary boost to the damage you inflict.

It takes a good bit of getting used to just in finding the rhythm of play. Combos, once started, can not be interrupted, leaving you open to attack from enemies other than the one you’re pummeling if you don’t pace yourself properly. In addition, prone enemies can perform the same sort of crowd-clearing special attack as you, and they will. A lot. If you’re standing anywhere near a downed enemy, you have to be prepared for the inevitable hit to come and, if unblocked, you’re going right to the ground.

Another issue comes from the ability to swing your fists a full 360 degrees. The game offers no sort of targeting assistance, even when your attack would only miss by a couple of pixels. It’s particularly frustrating with prone opponents when you can’t manage to land a blow on a stationary target. After becoming more skilled, it’s less of a problem but it does persist and can be quite frustrating at times. 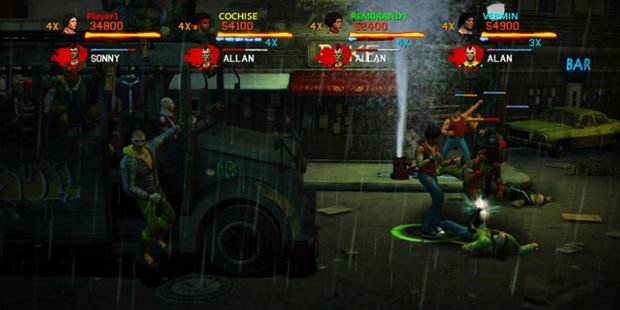 Blocking attacks is of paramount importance. The Warriors, regardless of what their stats may say, do not have a lot of health and it will get drained down pretty quickly if you aren’t careful. Unfortunately, there seems to be no way to break an enemy combo, as all of their attacks seem to come one after another and your character reels back a bit after each blow, rendering them completely impotent. So, the only way to survive is to anticipate when you’re about to take a hit, not be attacking when that happens and hope you can get your block up quickly enough. It feels unfair at times but so do a lot of 2D brawlers and this doesn’t stand out as being worse than most from the perspective of cheap attacks.

The campaign can be played with up to four players, either locally or online, and you’re probably going to want to bring a friend along for the ride. Even at the medium difficulty setting, Street Brawl is a challenging game and having a partner or more to team up with makes things a whole lot easier… up to a point. Playing a full game of four players tends to be a bit on the confusing side and there usually aren’t enough enemies to keep everyone busy and having fun. Alternately, if you have no friends, you can include up to three AI-controlled teammates who are astonishingly competent fighters, if a little slow in the “walking towards the objective” department.

A few other features of the campaign are interesting touches. Tons of objects in the environment can be destroyed and will often have score items or health restoration, but it’s left to the player in most cases to figure out what can be destroyed and what can’t (hint: most things can) as they often are not very obvious. It gives a little sense of discovery which is appealing. In addition, there are multiple optional paths that act as diversions which may shorten or lengthen a level and provide power-ups or weapons. 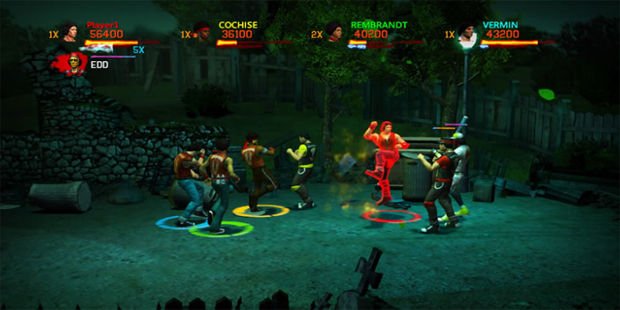 In addition to the story mode, there is an “Arcade” mode featuring more difficult enemies, no continues and no checkpoints to load from. It is strictly for hardcore fans of brawlers, as it is very challenging to play and you’ll probably get raped. Additional modes include “Boss Rush” and “Versus”. Boss Rush gives you one life to clear as many of the game’s bosses as you can, while Versus is a local-only brawl between players. Neither the Boss Rush or Versus are particularly fun, though the former is more due to how difficult it is to beat any of the game’s bosses on your own with only one life.

All told, if you really enjoy either The Warriors or 2D brawlers, this would not be the worst possible way to spend your money but it’s still difficult to recommend due to the problems it has. There are some great elements but they can’t make up for its problems. Outside of a love for one or both of those things, there’s very little reason to pick this game up. It can be fun, but the pacing is annoying and the difficulty will frustrate all but the devoted.