A European shooter that tries to bring the AAA retail experience of Gears of War to a digital-only medium? Surely such a thing has to be shoddily made, incomprehensible, and thoroughly awful. There is no Earthly way that such a game could prove itself as a hidden gem, a diamond in the rough, a surprisingly brilliant title that manages to make the best of what it has. It simply couldn’t shock us out of our cynical ways and teach us a lesson about judging books by their cover.

Isn’t it horrible when a game lives up to your low expectations and doesn’t provide the pleasant curveball you were secretly hoping for? As far as The Scourge Project is concerned, you best leave your hopes at the door. This game has no intention of confounding expectations, and most definitely wishes to be judged by its stained, torn cover. 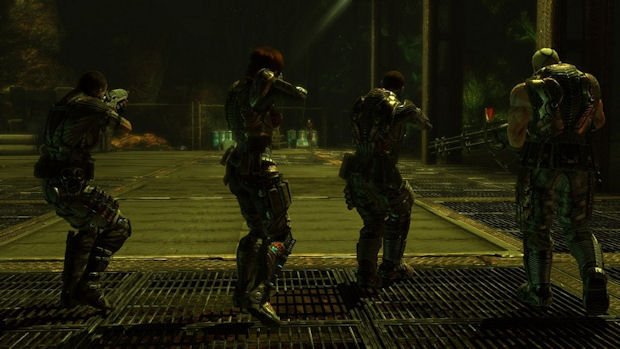 Although billed as The Scourge Project: Episodes 1 & 2, there is no way to buy this game in separate installments. With no future episodes currently planned, it seems strangely pretentious to package this as two chapters when it is, for all intents and purposes, a single game. If you want The Scourge Project, prepare to drop twenty dollars on the full package. Take it from me, though — you don’t want this.

The story, what there is of it, involves an evil corporation doing terrible experiments, because that’s what happens in 90% of all videogames ever made. You take on the role of Echo Squad, a band of four mercenaries hired by the Tarn Initiative to put a stop to the bad guys. It’s never really explained who the bad guys are, who the good guys are, or why you should care about anything. All you ever get to know is that things happen and people say stuff. It’ll be hard to concentrate anyway, since the FMV cutscenes are so badly compressed that you’ll be busy shielding your eyes.

The Scourge Project is basically Gears of War, but not as good. It’s a cover-based third-person-shooter and it never deviates from the beaten path. From start to finish, the entire game is about running, hiding, and shooting. In a game with tight controls, interesting weapons, a semblance of plot or even great graphics, this might not be such a bad thing. However, Scourge Project lacks all of those things, leading to an entire experience that could be categorized as mediocre if we’re feeling generous. Inhumanly generous. 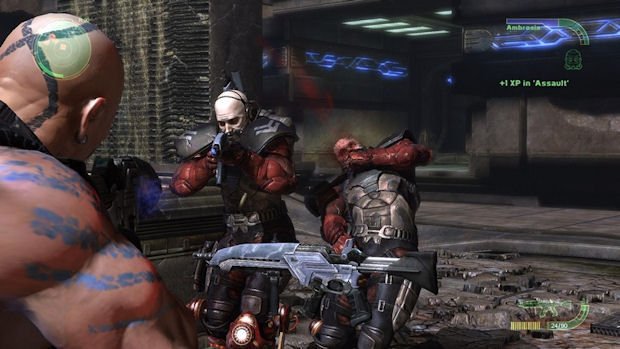 Up to four players can co-operate through the game’s mercifully short campaign, and you’ll need them because Scourge Project‘s AI is, quite literally, the worst I have ever seen in a game. Enemies and allies alike possess the reasoning ability of a goldfish being swung around on the end of some string. Most of the time, both sides of the fight are content to run around the map without any reasoning behind their actions. AI partners won’t revive each other when they fall, and they only revive the player if they feel like it. Sometimes I’ll be downed — which happens often because characters have the HP of a fly — and an ally will simply stand and watch.

Most of the time, a single AI ally will break off from the other three and run headlong into a hail of enemy fire. The ones who are slightly less suicidal will frequently run in front of the player, soaking up friendly fire and generally obscuring the view of targets. One character threw a grenade into a wall so it bounced back and exploded the team. Another stopped fighting and chose instead to smash his crotch into a metal box. It would almost be funny if the checkpoints weren’t few and far between, the enemy strength so imbalanced, and the player characters so prone to collapsing after absorbing three seconds of gunfire. Ostensibly, you spend the whole game backed up by the cast of Police Academy, and it’s inexcusably terrible.

Most of the game is spent babysitting these fools as they fight an army of slightly more intelligent, but no less exasperating, morons. If you happen to get gunned down, it’s not uncommon to see a “Fail Conga” where one ally will run in to revive you, suffer the same fate you did, then wait for the next ally to run in and get mowed down too, followed by the fourth and final idiot. They don’t think to clear the area of enemies first. They simply run into the same danger spot without a care in the world. You can’t issue orders, and characters lack the ability to see what you’re doing and act the same way. You have the ability to generate a shield, for example, but your allies will, without fail, run straight through it so they can fill themselves full of enemy and ally bullets. It’s simply unbelievable. AI was better than this two generations ago. I don’t know how characters like this exist in 2010, unless they were programmed by a kindergarten special ed class. 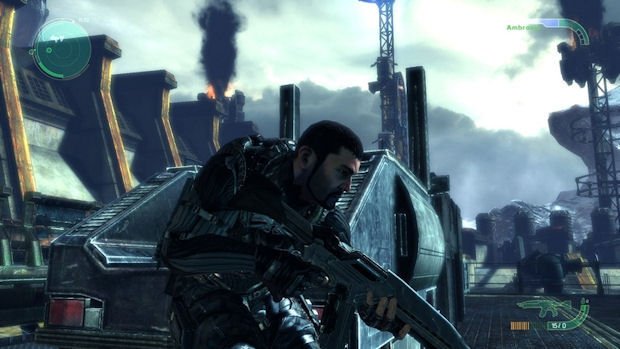 Co-op can alleviate some of the stress, but in the two hours it took me to get to the final chapter, I could only connect to one human player at a time. There just aren’t enough people playing the same chapters at the same time to get a full team of four. Even if you did, some of the fights at the end are so imbalanced and overwhelming that it stops being challenging and simply becomes pathetically cheap. I’m fairly convinced that the final battle is next to impossible without four player characters, and since you won’t find four players, it is impossible. There’s no way you can fight so many enemies and deal with the game’s atrocious, inconceivably dimwitted team members. It cannot be done.

The AI situation is helped along by (obviously) piss-poor controls. Characters feel unresponsive, the cover system doesn’t work properly, and the in-game camera is a mess. There are also plenty of glitches, such as key items spawning in inaccessible places, or animations screwing up halfway through in order to completely disorient the player. In short, this is a clunky, buggy, broken joke of a game. When it works, the very highest compliment you can give is that it’s functional in a totally uninspired way. When it doesn’t work, which is frequently, the very best you can say is that at least playing it doesn’t give you cancer.

Scourge Project also boasts a 16-player versus multiplayer mode, but if you think that’s where the game truly shines, you can forget it. It’s laggy, it’s slow, it’s boring, and there’s no balancing whatsoever. Once a player finds the minigun, they’re pretty much unstoppable. If you don’t find the minigun, combat generally consists of slow paced stalemates where players trade shots behind cover, regenerate their health, and do it again until someone gets bored and risks running in for a melee kill. All in all, it’s a total waste of time. Gears of War may currently only boast eight players per side, but it’s still infinitely more fun than this garbage. 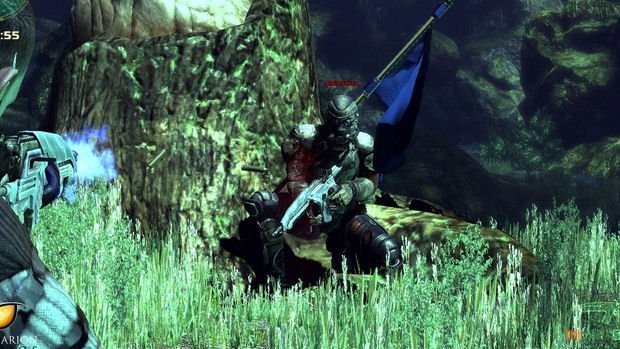 This game is a sloppy, unforgivable mess. Budget and format are no excuse for a game this badly put together, and the fact that the studio has the gall to charge twenty bucks for such trash is an absolute joke. As cruel as I may sound in this review, it would be an even greater unkindness to try and find the good in a game so universally terrible, thus making developers think that something like The Scourge Project is acceptable. All I can say is that it looks as if they at least tried to make an effort, but their attempt to create a digital, small-scale version of Gears has been an absolute failure.

Just because you look like you might be a crap game, that doesn’t mean you have to be a crap game. I’m sorry I ever hoped to have my expectations confounded.

Score: 2.5 — Bad (2s are a disaster. Any good they might have had are quickly swallowed up by glitches, poor design choices or a plethora of other issues. The desperate or the gullible may find a glimmer of fun hidden somewhere in the pit.)