Proof that Obama’s socialist agenda is progressing unchecked, a port of 2007’s under-exposed hardcore PS2 title The Red Star made its debut in the App Store this past month. Sourced from the graphic novel of the same name, the game is set in a futuristic Soviet Russia where technology and magic both exist. Part side-scrolling beat-em-up, part top-down bullet hell, the original was praised for forcing varied play and for maintaining a steep challenge.

This port looks absolutely stunning; games like this and Chaos Rings are showing that developers are finally beginning to learn how to successfully leverage the iPhone hardware for graphics. Featuring melee, ranged, defense, and magic functions, the iPhone version requires the same amount of strategic consideration as its progenitor, and the difficulty is still through the roof.

Regretfully, as good as this game looks on the iPhone, it plays badly in equal measure. 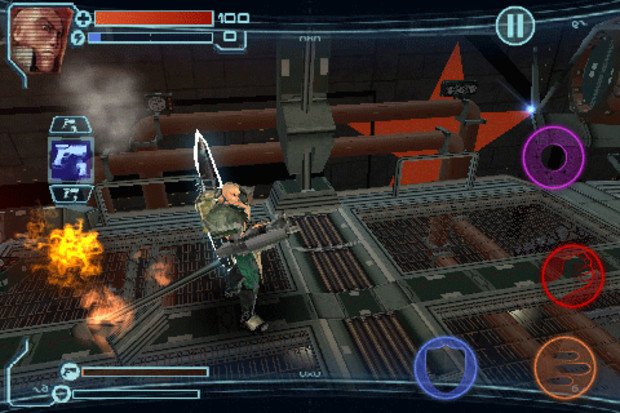 The Red Star offers the ability to control movement from wherever you make contact with the screen, which is a design decision I’ve been delighted to see slowly becoming the standard in recent iPhone development. Espgaluda II is a great example of how this control scheme can improve bullet hell gameplay on the iPhone, and it could have greatly enhanced The Red Star if it weren’t for other poor decisions.

The largest issue the game faces is that there’s simply no room on the screen to execute attacks properly. Between health/magic meters, cooldown meters, 4 action buttons, and more, the user interface is more crowded than Felicia Day at a LAN party. This basically gimps ranged attacks right out of the picture when the game is in side-scrolling mode, as by the time you can even see and lock onto an enemy they’re nearly in melee range.

The choice to include UI elements on the bottom-left of the screen was mind-boggling to me, since this is where one’s thumb naturally goes to control movement. Combine this with the general lack of free on-screen real estate and you have an extremely awkward decision to make.

You can leave your thumb where it rests comfortably, but then you will be obscuring the cooldown meter for your gun. When you are in the middle of a hectic boss battle in The Red Star you will be relying mainly on ranged combat, so not knowing when your gun is overheating is a serious issue. The alternative is to use the left or center of the screen for movement, which will force you to periodically obscure your character or enemies on the screen with your thumb. Either way, it is a ridiculous impediment to playing the game.

The ranged combat takes another hit with the game’s lock-on mechanic. In order to lock on to an enemy, you must first be facing them. When bullets and enemies are filling your screen it can be very difficult to tell which way you’re oriented – you’ll frequently end up targeting the wrong thing as a result. You’ll also find yourself locking onto a target when you didn’t mean to because you were adjusting where your thumb was for movement. 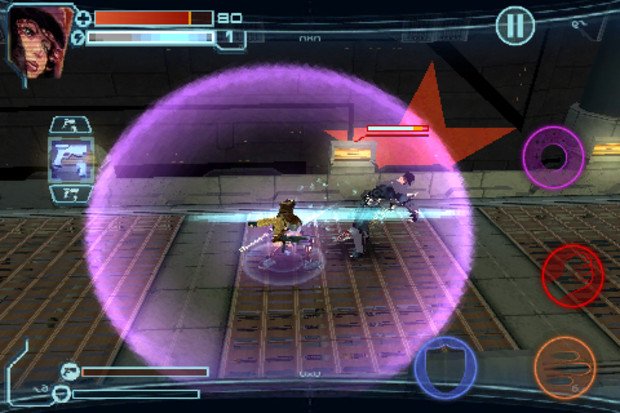 In addition, the lock-on is activated by inputting a double-tap-and-hold. If you want to change targets, you’ll have to release the screen, make contact again to reorient yourself to the new target, then release and double-tap-and-hold again to acquire the new lock-on. That is, of course, if you haven’t been thoroughly riddled with bullets or melee spammed in the interim.

The screen layout issues make it hard to enjoy the excellent visuals, and the already steep skill requirement is made nearly intolerable by the unwieldy UI and control scheme. Movement is a bit sluggish in general, and while the quality of the graphics is high, the frame rate takes frequent hits both before and during boss battles.

The lack of checkpoints in the game makes all these issues even worse; this version simply does not take into account how the iPhone control scheme impacts the challenge, which was perfectly balanced for hardcore players in the original. Even setting the difficulty concerns aside, having to replay an entire 20-30 minute level due to getting a phone call is a massive porting oversight.

With no story to speak of, a shoehorned console experience, and a sizable price tag for the App Store, I am forced to assume that the end-goal of this communist propaganda is simply redistribution of wealth. As much as I wanted to rave about this one, I must begrudgingly admit that those who love freedom would probably be better served hunting down a copy of the PS2 version or downloading it for PSP.