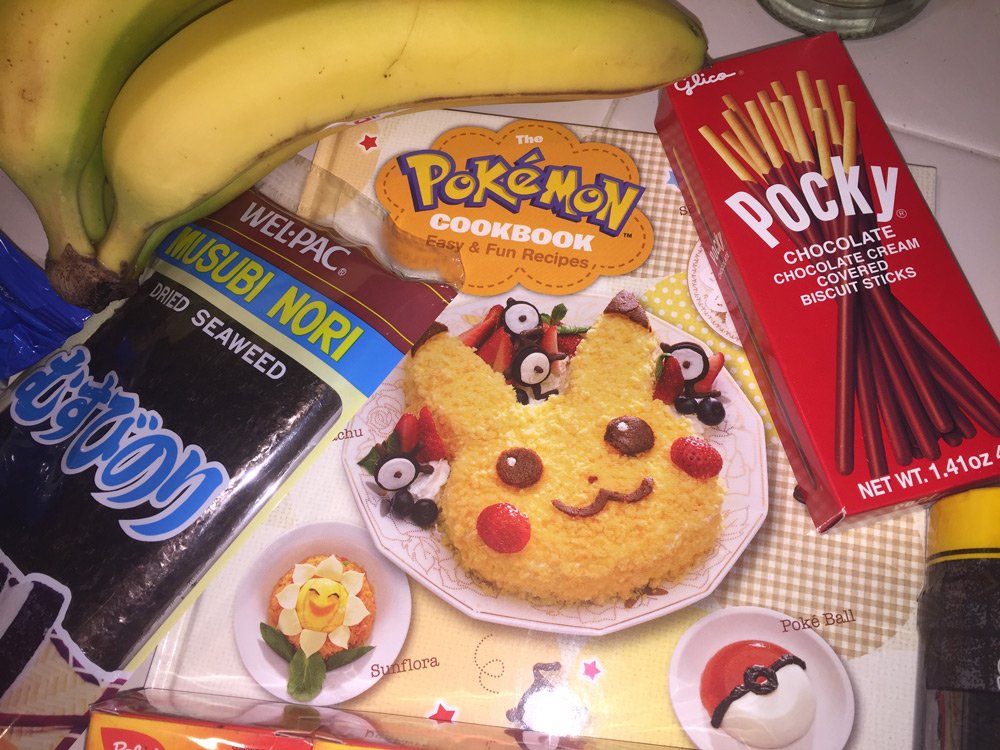 If 2013 was the Year of Luigi, 2016 has to be the Year of Pokémon. From that kick-ass Super Bowl commercial last February to the release of Pokkén Tournament and through the record-breaking launches of Pokémon Go and Pokémon Sun & Moon, it feels as though everyone has been talking about Pokémon non-stop for the past 11 months. It’s Pikachu’s world and we’re just living in it.

For the past few weeks, I’ve been eating in it too with The Pokémon Cookbook. Designed with kids in mind, it’s supposed to be filled with “easy & fun” recipes for you and your children to enjoy together. As you’ll see below, getting your creations to match what’s pictured in the book may not be so easy, and its fun factor is questionable. 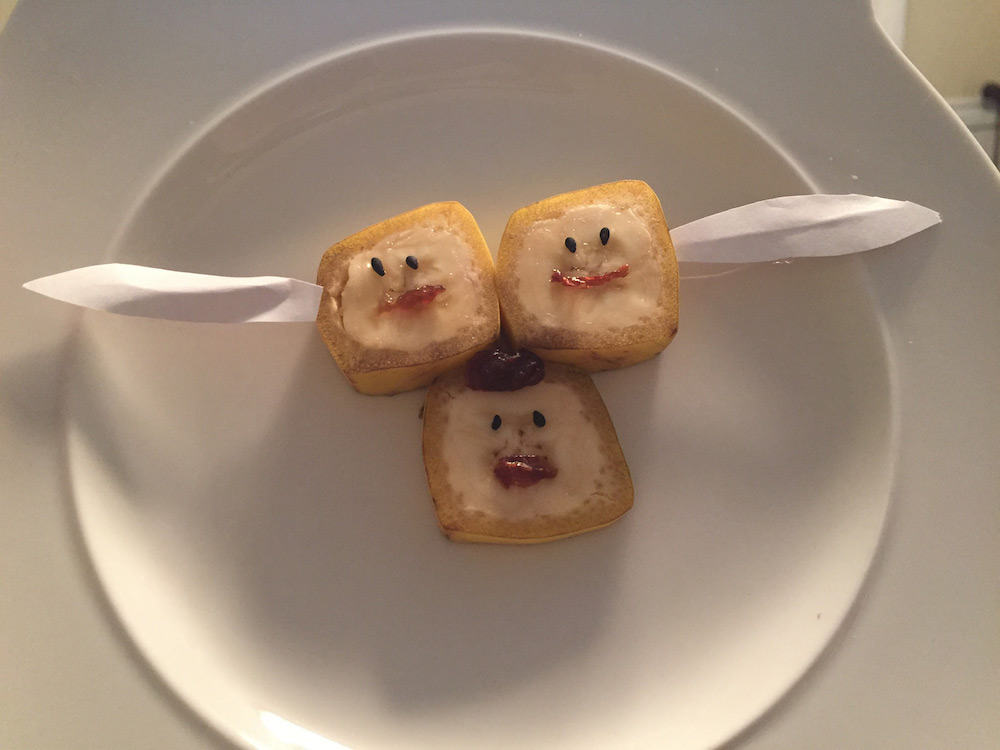 I decided to use that Combee picture right at the top because it’s the closest I ever got to recreating the image found in the book. That recipe uses a banana, black sesame seeds, raisins, paper, toothpicks, and glue to make the honeycomb Pokémon. That little thing right there was about 20 minutes of me cutting those raisin skins down just right to make the mouths. If that doesn’t sound very fun, then know this book probably isn’t for you.

The Pokémon Cookbook, I believe, is a misleading title because it’s not really a cookbook. The Pokémon Food Art Guide would be more accurate. Through its 30+ recipes, you’ll find there isn’t much cooking skill required. Instead, those with the necessary art skills will find their creations matching up to the images that I can only assume were made by a team of experts. For me, my dishes turned out much like a Big Mac from McDonald’s: delicious looking in the ad, but terrible slop when you actually get one. 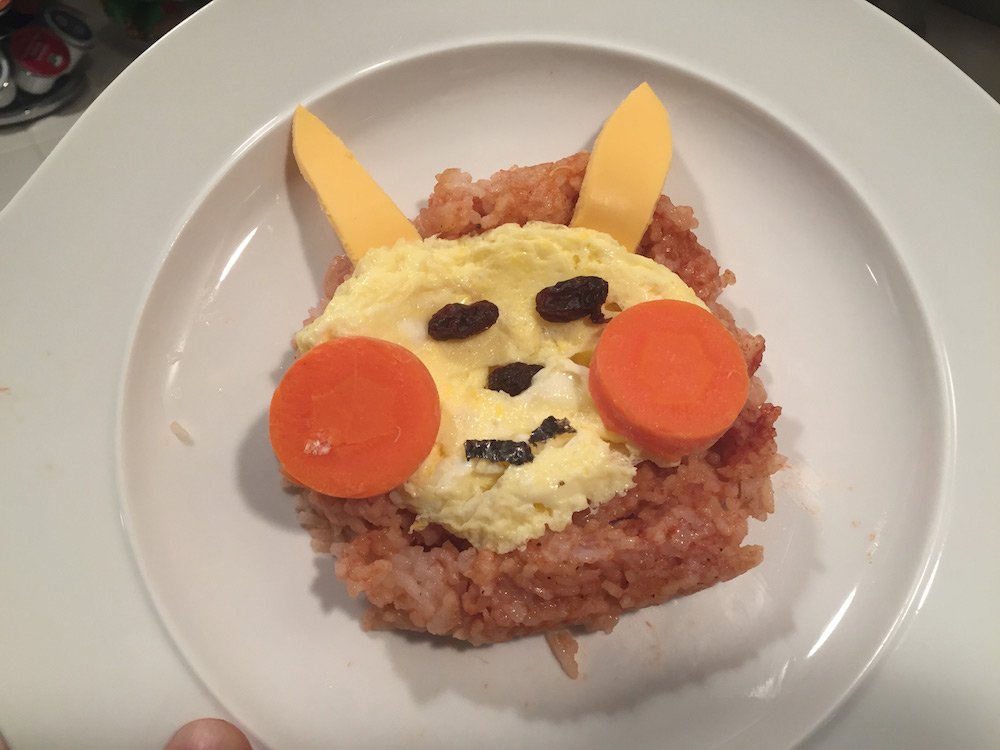 After it dawned on me that this wasn’t going to be the type of cookbook I thought it would be, I had a second realization: it’s tailored for a Japanese audience. If you don’t have a Japanese grocery store near you or a store with a decent Asian aisle, prepare to make a lot of substitutions. I found my local grocery stores had an awful selection of Japanese foods, with their shelves mostly consisting of soy sauces with different amounts of sodium. Fish sausage, kamaboko, mochi, kinako, hijiki seaweed, ohagi, castella – all ingredients it asked for that I could not find at any of my local grocery stores. So I had to make substitutions where I could, and where I couldn’t I just said, “forget it.”

Because this book is intended for kids, it won’t ask you to fire up your stove that much. A lot of the recipes will have you microwave instead. Doing so is easy for youngsters and their comfy shorts and a great way to teach kids how to microwave an omelette or potato. That I was fine with and they both tasted good, but I wasn’t too keen on microwaving raw ground beef. It always came out way too dry, even with the added ingredients.

Other recipes require pre-made items like a DiGiorno pizza crust or Oreo cookies (though they don’t call them by name). Those cookies were used for what was obviously the easiest recipe in the book: Chocolate Unown Cookies. As you can see below, it’s just an open Oreo with some chocolate drizzle on them. What does it taste like? Like an Oreo with chocolate drizzle on it. 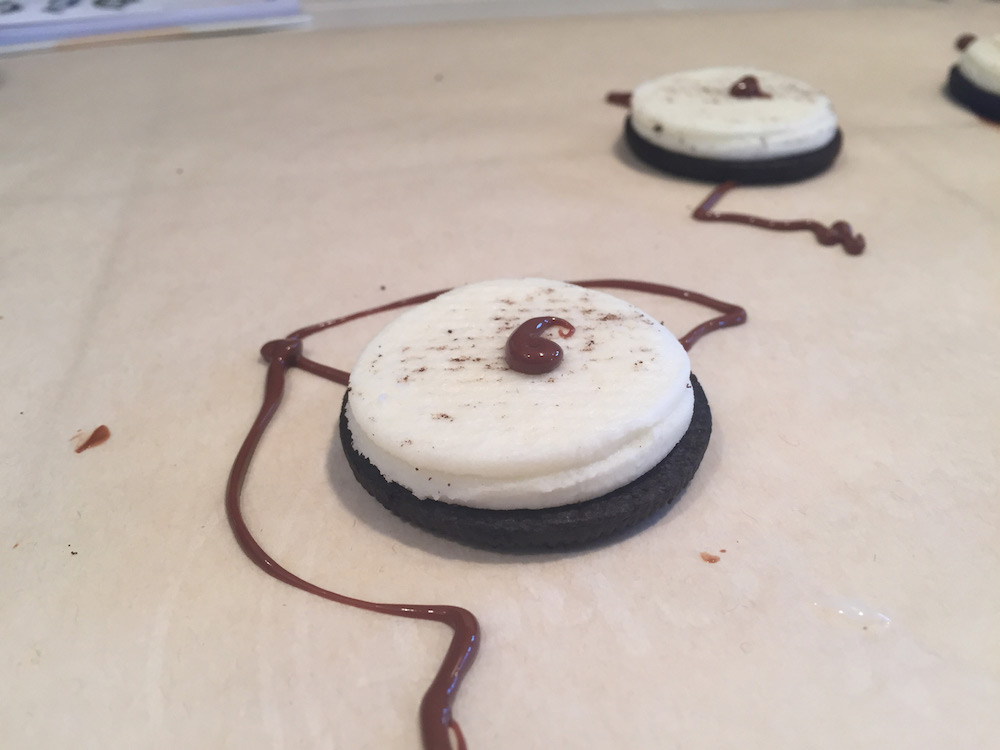 This was the very first recipe I attempted and there seemed to be some missing steps from the book. There was no indication how much chocolate sauce you put down on the parchment paper nor how long you’re supposed to let the cookies stand before you try and separate them from the paper. Other recipes I found failed to tell me exactly what type of ingredient I would need. My Poké Ball Sushi was a waste of time and money because I purchased the wrong type of smoked salmon.

You really have to be precise in your execution or you’ll end up with a monstrosity, or worse, wasted ingredients. The Pikachu Happy Face Cake, which looks like this in the book: 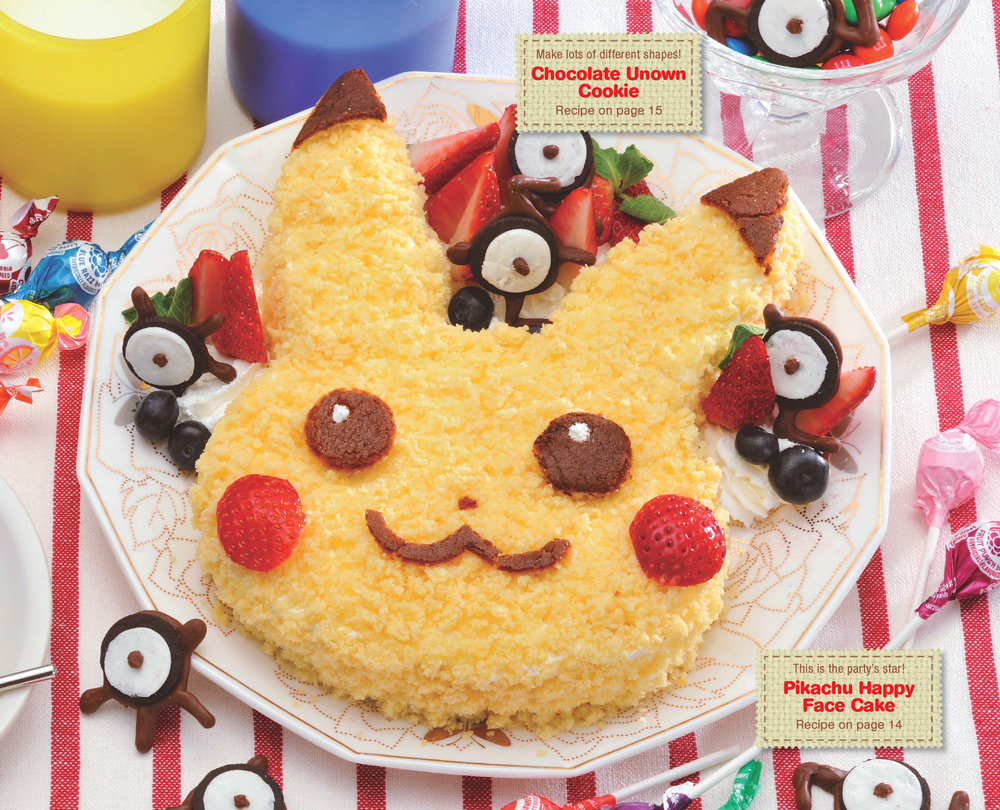 Looked like this when I failed my way through the design: 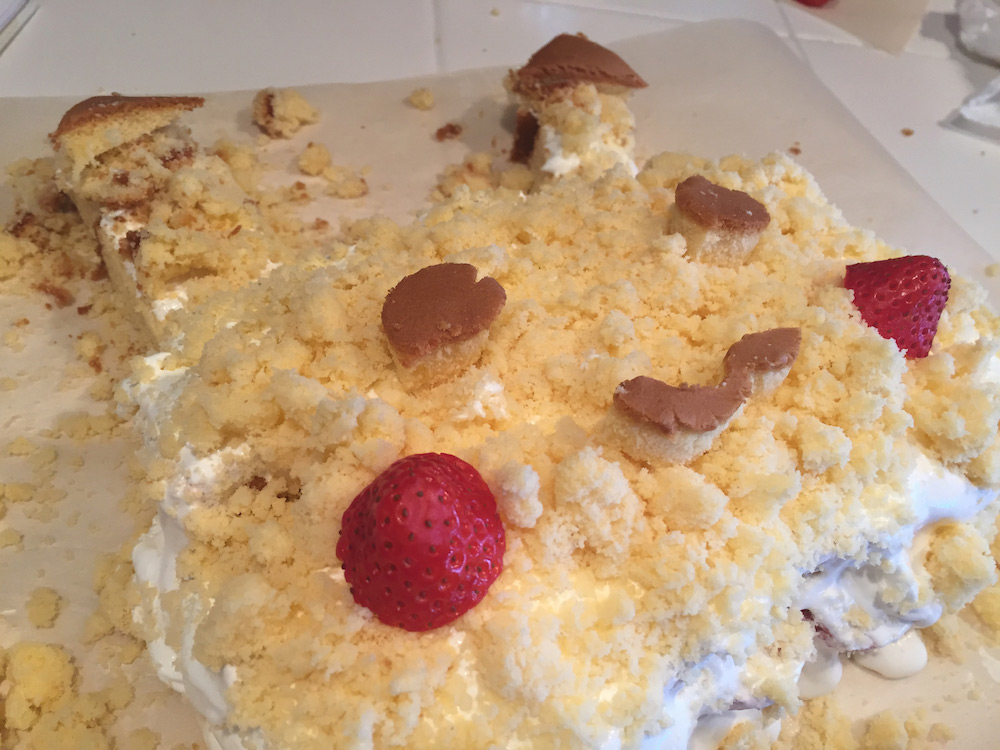 The layout for the book separates foods into four different categories and it’s filled with lessons that teach kids the basics of cooking, microwaving, cutting, and food pattern making. Each page features colorful pictures of the food you’ll attempt to make and pictures of the Pokémon, along with their name and type. There are also illustrations of how you should be preparing the food, but it’s not always as clear as it could be. A confusion in size is how I ended up with that Mimikyu above.

The Pokémon Cookbook, I feel, is less a cookbook than a guide for people who love to Instagram their food. What you make doesn’t taste bad, outside of a few poor flavor combinations, but it can certainly look bad without practice. For a lot of these recipes, each attempt at perfection could cost you a lot of money. Once you do perfect it, it’ll be ready for its smartphone close-up.

While I don’t see myself attempting to recreate my favorite Pokémon in food form again, I did learn a few tasty recipes that will be added to my normal rotation, including egg pancakes and ketchup rice. And while it wasn’t a recipe in the book, I did find the inspiration to make some authentic Pokémon jelly donuts. 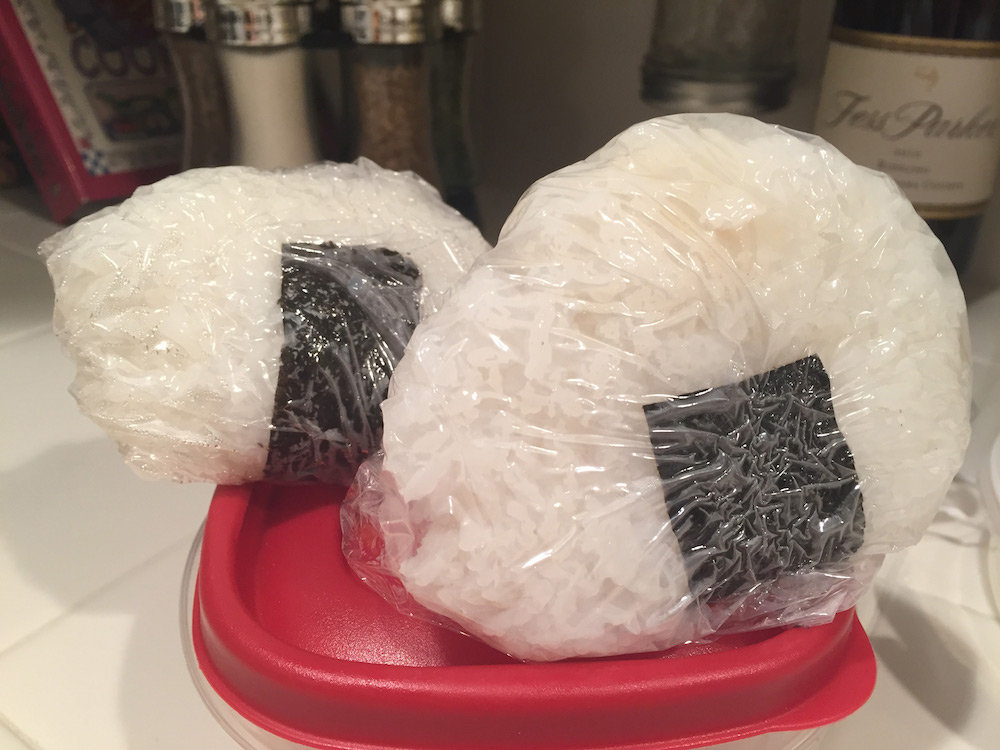