It’s really easy for PC snobs to hate on OnLive. Because it is a streaming service, visual fidelity and lag pose a serious problem, leaving many to write off OnLive before it has properly launched. And let’s be real, while the service has been up and running since June, zero advertising and consumer attention has made OnLive a non-competitor in the market. After all, OnLive CEO Steve Perleman has even told me, there have been only 2 million log-ins for the service. That’s like saying people have only turned on Xbox Live 2 million times. Ouch.

However, that could very well change. OnLive is going to be making a big marketing push later this year for the holidays, will be coming to new devices next year (mum’s the word on that) and there’s a little device called the MicroConsole. Connecting any high-definition TV to the OnLive service, this little guy could mean a lot for OnLive. Or it could mean nothing. However, after two weeks with the MicroConsole and its partner, the OnLive controller, I can certainly say this is a very attractive option for a potentially huge audience. Is the MicroConsole for you? Follow the jump for more.

If you don’t know, OnLive is basically a game streaming service, much like popular video streaming sites. However, while Netflix is on plenty of TV set-top devices such as Roku, OnLive has to deal with issues like 1080p output and an idealized 60 fps. The games don’t always perform at those standards, so you won’t see OnLive as an app on Google TV, Apple TV, Roku, or any other set-top TV devices, at least not right now. From talking with Perlman, we know that the company is looking into all sorts of new technology to bring streaming gaming content to consumers, and everything from 4G wireless to making OnLive a third-party app for other products is being considered for the future. 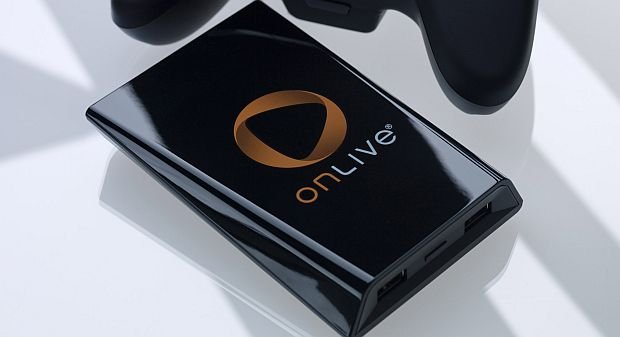 Announced for a December 2 release, consumers will receive a rather stylish black box for $99. Nestled inside is the MicroConsole, the OnLive controller, some batteries, an HDMI cable, a power cable, and a short USB cable to get the device up and running. It supports some Wi-Fi connections, but that service is still in beta, and it’s strongly recommended to have wired Ethernet access. In addition, you’ll have to use an HDMI port to plug the MicroConsole in, so if you don’t have one on your TV, you’ll have to pay $30 for an HDMI-to-component converter. In addition, if you want a rechargeable battery for the controller, it’ll cost you an extra $20. Keep these in mind.

However, the MicroConsole itself is a pretty and impressive little thing. It’s small, too — about as big as a large smartphone. With two USB ports, HDMI out, optical audio out, a headphone jack, an Ethernet port, and a power plug, there is very little to the device. Apparently, the tech inside is all about reducing latency, and all in all, it uses less energy than a light bulb. Again it’s technically designed to output in 1080p at 60 frames per second, and it’s even future-proof, capable of outputting 3D titles. While the somewhat wedge-shaped design looks good, this is a device that is easily hidden away, for once the controller is initially synced up, you technically don’t ever have to see the MicroConsole again.

In the end, it’s the controller that is the defining hardware feature for the OnLive service. Thankfully, it’s a very solid gamepad. Dual-toned with sleek matte-black-and-orange accents, it looks and plays great. All of the major buttons are here, and if you’ve spent any time with the Xbox 360 or PlayStation 3 controllers, you should be very comfortable with this. 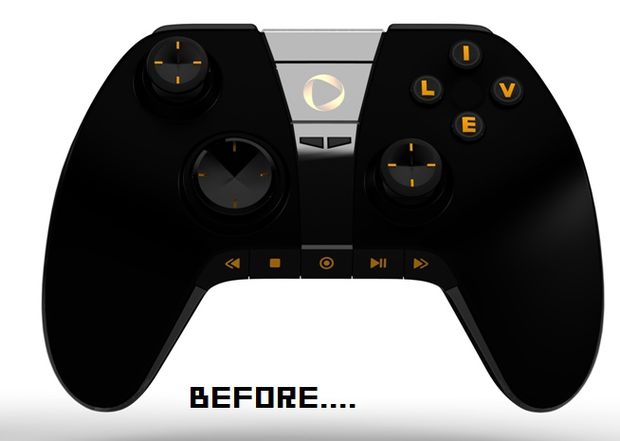 However, since it was first shown off in 2009, the controller itself has undergone some major changes. The left analog stick has switched places with the D-pad, and the D-pad has been redesigned with precision gaming in mind, especially fighting titles. All four directions can be pressed down in the center, which means you get none of the mushiness that the Xbox 360 controller, which rocks on a divot, has. Oddly, the center of the D-pad is scooped out, which I’ve been told makes it easier to use and harder to lose control. It’s certainly unique, and while I wish there were more games that really used the D-pad, as of right now, there aren’t very many. Some will love it, and some will hate it.

Everything else is pretty stable. The control sticks are at a fine height, and the face buttons (X, Y, A, and B) are spaced apart the same distance as the 360 controller. The triggers have slightly more resistance than the 360 controller but with less of a clicking sound, which I like. It’s ergonomic, and while the grips are just a little too small for my taste (a complaint I have about the PS3 controller as well), the OnLive controller is a great gamepad.

Interestingly, there is also a row of media buttons right underneath the control sticks. The “record” button is the only one you’ll really use, as that is the proper way to capture Brag Clips, those little moments of gaming glory to be shared with other OnLive users. Currently, OnLive is showcasing a trailer for the new Harry Potter movie, so hopefully there will be a chance to use the service for more than just games. Fingers crossed.

One odd fact is that the OnLive controller can only be used with the MicroConsole. As of right now, there are no drivers for the controller to be used as a generic PC gamepad, like, say, the Xbox 360 controller. So while you can use a 360 controller for OnLive PC/Mac gaming, you cannot use the OnLive controller for OnLive PC/Mac gaming. I expect a custom driver to come out eventually, but it’s a strange start for such a good controller. Ultimately, if the controller is not your jam, the MicroConsole supports Bluetooth mouses and keyboards, as well as Bluetooth headsets for multiplayer. As a matter of fact, there are games on the service that can only be played with a mouse and keyboard, so make sure you have a pair lying around. 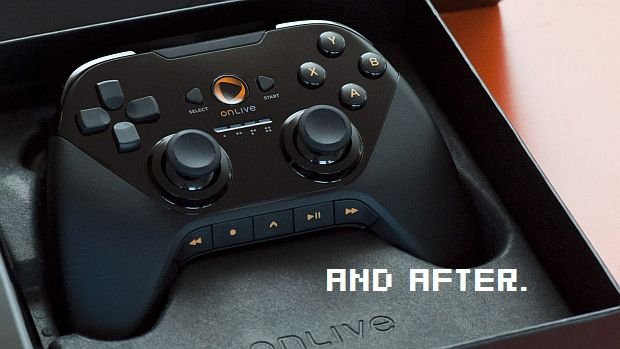 Upon turning on the MicroConsole, it takes between ten and thirty seconds to get from the home screen to playing a game. This is on par with any OnLive-supporting device, and the experience here is no different from streaming it to your PC, except for one thing. If you are using the MicroConsole on a larger TV set, make sure you have a fast enough connection. It’s recommended for sets over 40″ to have a 5 Mbps connection; 4 Mbps is suggested for sets between 30″ and 40″, and you’ll want 3 Mbps for sets under 30″. This is because the larger the screen real-estate, the more information has to be refreshed.

Actually playing OnLive on my 50″ Toshiba HDTV, I found things I loved and things I hated. Being able to jump in and play a game or demo within 30 seconds was fantastic. Titles like The Maw, Assassin’s Creed II, and Darksiders played great. However, occasional network errors would funk with the buffer, causing major screen tearing and sometimes sending my character off on his own path until I could regain control. Lag was not so much of a problem for these titles (except for camera controls, oddly, with the feel being squirrely), but first-person shooters suffer from enough lag to send the nicest hardcore gamer to the nearest forum to complain. These games, such as Borderlands and Unreal Tournament III play well, but that lag will drive many nuts.

Brighter and more colorful games also fared better visually. The Maw and Virtua Tennis 2009 looked almost as good as if they were freshly downloaded to my hard drive, and both played well. Unfortunately, dark games like Aliens vs. Predator have problems with washed-out blacks. Instead of being deep and solid, dark areas come across as shades of gray. For my network, I never got a game to look just as crisp and clear as if it were playing off my hard drive, and generally edges are softer in-game. It doesn’t feel like 1080p gaming, truthfully. Watching Brag Clips or checking out the Arena (where you can see other players play in real time) fared a little better. Ultimately, minor to major visual problems are the reality with OnLive’s service, something you’ll want to check out before getting the MicroConsole.

But if you do like OnLive, the MicroConsole could be great. Playing Darksiders on my TV set, I can save it, then pick up the game over at my local coffee shop on my netbook. I became a big fan of Virtua Tennis 2009 while testing the MicroConsole, and being able to take my character from my TV set to my laptop was a breeze. The back-and-forth is smartly designed, and it really doesn’t get much more simple than this. Again, PC gaming on TVs and laptops is something people already perform with basic AV skills and cheap hardware, but having everything streamlined is the whole point of OnLive. For the first time, I feel like PC gaming can be as easy as playing any console title. 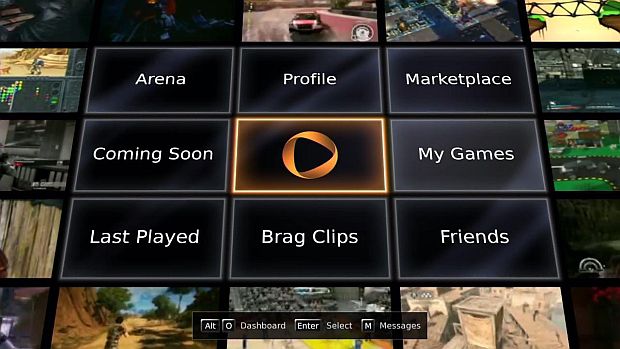 Ultimately, you’re going to have to figure out what kind of gamer you are. Anyone who already owns a powerful gaming rig would be silly to invest money in this device, as it’s not for them. But for mainstream and casual gamers looking to enter PC gaming, the OnLive MicroConsole, coming in at $99 with a controller and a free game up to $49.99 (before December 31) is a pretty fair deal. While the hardware itself is very good, at the end of the day, OnLive is a service, not a console. Anybody can turn on their computer, hook it up to their TV set and grab a controller and have exactly the same experience right now. So if you are thinking about getting the MicroConsole, I would seriously recommend downloading the OnLive software on your PC, playing around with some of the demos, and seeing if the quality is good enough for you and where you live.

If you can tolerate the sometimes finicky graphical fidelity, slight lag, and the “closed-garden” approach to multiplayer and DLC (don’t expect to be playing any multiplayer with your friends outside of OnLive, using mods, or getting much free DLC), the OnLive MicroConsole is a great piece of hardware. It’s very high-quality, and when everything is set up, so unobtrusive that you can forget the device is actually there. The games are playable (with some griefs), but with more game options coming, some hints toward a European launch, a constantly improving service, new subscription plans in the pipe, a holiday 2010 marketing push, and even more services hinted at by the company, OnLive is quickly becoming something relevant. With the MicroConsole, OnLive no longer feels like a half-assed service, but a fully featured infrastructure for potentially a large audience. That’s a good place to be.