Game Arts? Hey, I love Game Arts. They’ve made many of my favorite games, including the Lunar and Grandia series of games. Now they’ve released a WiiWare game that’s pretty far away from the previously mentioned role-playing titles. The new title, The Magic Obelisk, is actually a puzzle-style game.

Lukus, a tree spirit, takes on a human form to break away from the elder tree to find his own place to take root and grow. He is accompanied by Popo, a flying creature that doubles as a light source (you’ll see) and a guide for the unseasoned traveler….

Hmmm. You’ll just have to trust that it’s a bit cooler than I just made it sound.

Lukus cannot step foot into sunlight at all. He must traverse the world in shadow, or else he’ll instantly take root when the sun hits him, right where he stands. That doesn’t sound too difficult, does it? A light-based puzzler? All you need to do is stay in the shade? Yes, but know that you do not control Lukus. Instead, you control his flying buddy, Popo. Lukus moves on his own, looking to move along the shade you — as Popo — create for him.

Popo’s job is to activate magic obelisks (hence the game name) on the game’s maps to cast shadows for Lukus to walk in. After switching one on, Popo acts as a light source. Your job is to position Popo behind the obelisk at an angle that will cast a shadow that can connect other shadows, so that Lukus can continue on toward his goal. 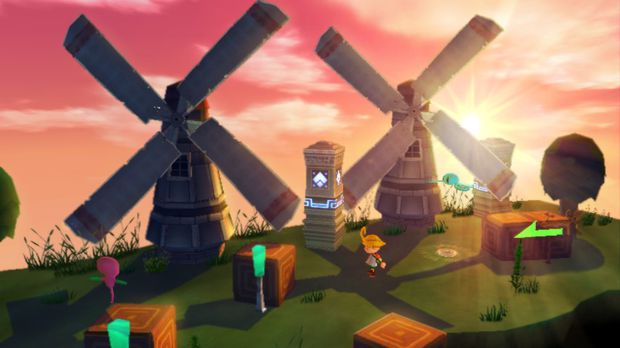 At first, the game’s maps only has you connecting shadow to shadow. It gets more difficult, though, with obstacles and enemies that cannot be defeated. Instead, you’ll have to steer Lukus in the right path, around these obstacles and enemies. It doesn’t help at all that Lukus is kind of stupid. He’ll blindly walk into danger, so you’ll have to scramble to intercept his mindless strolling, or whistle (by hitting the 1 button) to distract him. Things complicate even further when new obelisks are introduced, bringing elements like ice, heat and wind into play. This is a game that will keep you on your toes, with the action steadily increasing over more than two dozen levels.

On paper, this really unique puzzle concept is solid and smart. Unfortunately, the execution lets the game down a bit. The major problem is the control. While appropriately simplistic, using only two buttons and the d-pad on a sideways-held Wii Remote, it lacks in precision, leaving Popo to miss steps, which leads Lukus to his doom more often than it should. Popo needs the ability to smoothly fly around these round obelisks to shine his light at a precise angle, so that a shadow will fall exactly where needed. With the digital-only control, which seems somewhat jerky and imprecise, sometimes a rushed shadow drop falls at a just-miss. It becomes frustrating quickly, and it seems like smooth analog control would have been more appropriate here. 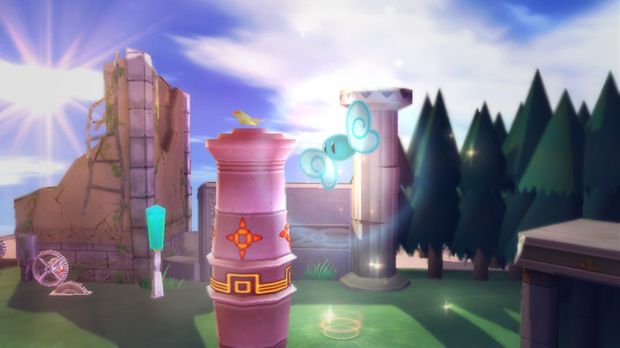 It’s a shame because some of the later puzzles are close to brilliant in their level of challenge. With a fixed camera and multiple light sources going, you have to have your thinking cap on to figure out how the shadows will fall. When you do finally work it out in your head, you’re excited. Too bad you’ll be let down by the failed control sometimes. If I were the guy that worked so hard on creating such smart levels, I’d have serious beef with the team/people that worked on the control. I wouldn’t go as far as to say that the control is a dealbreaker, though. It’s more like a blemish on an otherwise perfectly fine videogame.

One nice thing I can say is that The Magic Obelisk is freakin’ adorable. Lukus, while kind of dumb, is childishly charming, with his huge blond ahoge and his goofy smile. Sometimes his idle animations are so cute that you can’t help but laugh. I often found myself watching him to see what he does, like when he shivers and his eyes bug out on the ice levels. You’ll do other cute things like help a fat bear find presents for his mom. Or lead a mopey giraffe to water. Again, I can’t stress the cuteness enough. The graphics are pretty nice for a $5 WiiWare, with pretty colors and eye-pleasing vistas. As you’d expect from a light-based game, some of the maps sport really nice lighting effects and shadow work. 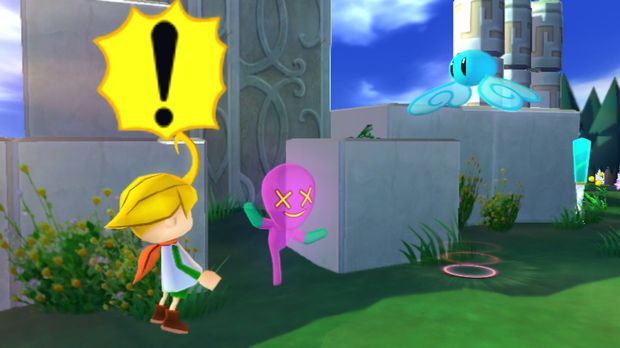 The Magic Obelisk has so many things going for it. It has really unique light-based puzzle game play, super cute graphics and characters, and a fantastic price tag. The clunky control does let the game down a bit, but I still think it’s certainly worth your time and your $5.