You’d be hard pressed to find a Nintendo franchise more storied than The Legend of Zelda. Although Mario and Pokémon have far surpassed the series in terms of raw sales, Zelda fans are among the most passionate fans in the industry.

Naturally, an official love-letter to Zelda enthusiasts is going to get quite a bit of attention, leading it to take the top spot on Amazon’s bestseller list — enter Hyrule Historia.

The compendium is segmented into four parts: “The Legend Begins,” which is entirely about Skyward Sword; “The History of Hyrule,” which takes us through a journey of every Zelda game to date; “Creative Footprints,” which is my personal favorite section filled to the brim with sketches; and finally, a comic prelude to Skyward Sword.

Join me as I dive into every facet of what Hyrule Historia‘s 277 pages has to offer. 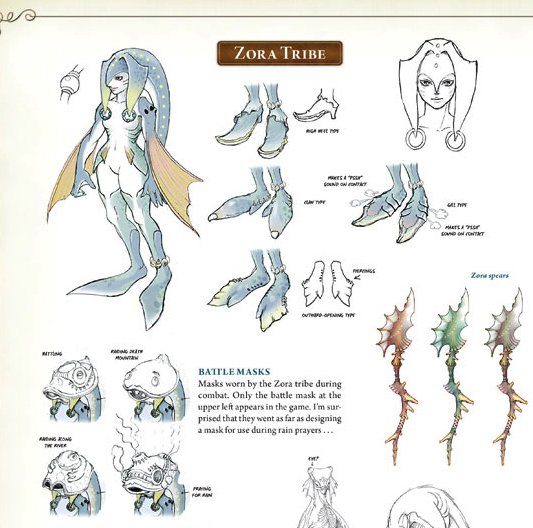 From cover to cover, the physical book is wonderfully crafted. The word “tome” actually is fairly accurate, as the book feels fairly weighty, and almost a steal at the asking price. It has a beautiful minimalistic cover that represents the elements of the Zelda series, and colored in the perfect shade of green, it’s a great conversation starter as someone walks over to it and sees the resemblance to Link’s classic tunic.

The first thing you might notice when you open the book is the inclusion of a letter by one of the most famous faces in Zelda history: Shigeru Miyamoto. It’s a nice little section that explains what the Zelda series means to him, and what some of the basic tenets of the series are. Towards the end, Eiji Aonuma also gets to weigh in. Both of them are fairly lengthy and from the heart, detailing how the Zelda series came to be and what it means to both of them.

These were crucial additions that really added to the overall package, letting you know that this wasn’t just a cheap cash-in. Do keep in mind that this is a straight translation of the Japanese book that dropped in 2011, so a few parts are not going to be up to date.

The first major section of the book is the portion on Skyward Sword. And when I say “Skyward Sword,” I mean nothing but. There are sketches, artwork, character profiles, and a general overview of every single area in the game — in fact, I’d go so far as to say that this is basically a complete book in its own right with regards to this particular Zelda iteration.

My favorite aspect of the Skyward chapters is probably the little tidbits of information, like the fact that they specifically removed a sense of regality from Skyward‘s Zelda character design, but at the same time had to figure out a way to make her stand out.

Or the reason why the Pumpkin Landing bar doesn’t serve milk is because Skyloft doesn’t have “ground themed” animals on it. If you’ve played it, you probably noticed that, but at the same time it’s nice to see how much thought was put into the game.

In addition to factual nuances, the writers also have a bit of fun too. Like when they suggest that Sheik’s harp from Ocarina of Time may be the same one as in Skyward Sword, or that the Timeshift Stones might be made out of the same blue material as the iconic blue Ocarina.

The artwork is plentiful and beautiful, and there are a lot of quotes that bring to light how much creative freedom was given with the game. You’ll get to see early concepts, like the creatures that were supposed to be the original Kikwis, and a rejected Zora-like race.

There are tons of Skyward-related sketches, factoids, and art on display in this section. If Skyward is your absolute favorite game in the series, you’ll be in heaven, and it’s probably worth a purchase for that alone.

Personally, I wasn’t the biggest fan of Skyward Sword, so I would have appreciated some elongation of the other three portions of the book. At the same time, this first section was so well done that I gained a bit more appreciation for the game, and I even had the itch to play it again. Plus, you have to keep in mind that this book was released in tandem with Skyward Sword and the 25th anniversary celebrations.

Next we move onto the “History of Hyrule” section, which everyone will probably remember as the initial controversy-starter a while back that brought Hyrule Historia so much buzz. While this may seem like a standard retrospective at all of the Zelda games, it’s a bit more than that.

This is the “big deal” that everyone was referring to a few years back, when it was said that Nintendo would take on the “official” timeline theories that have been circulating for years. The book explains how there is initially one timeline that eventually splits into three different realities.

Whatever your take is on the “official” stance, Nintendo does a decent job explaining how each game fits without getting too ridiculous — the key is that Ocarina splits into three branches — and that’s really all you need to understand. 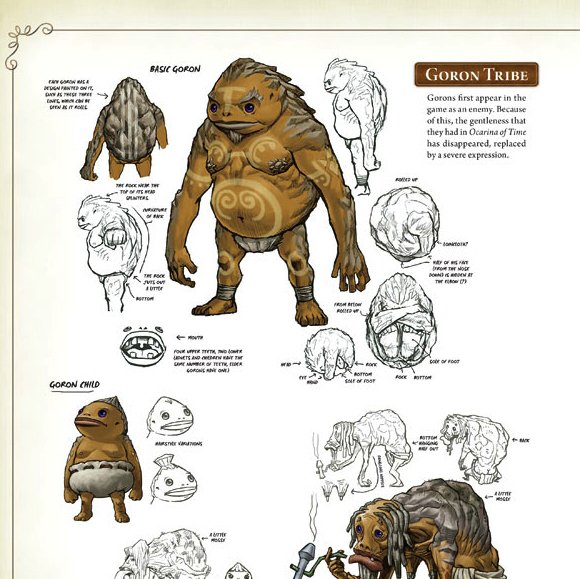 Each game is roughly equally represented, from fan favorites like Majora’s Mask and Ocarina of Time to underrepresented games like The Minish Cap. All of the stories more or less weave into each other, with sufficient reasoning given for the split-timeline theory.

The only bad part about the this section is that it doesn’t include any spinoffs, but that’s understandable as this section is mainly presented in order to establish an official canon.

Next we move onto “Creative Footprints.” This section is my absolute favorite, and I even wish it was a little longer. You get to see insane drawings (some of which have never been shown before), like the original developmental maps by Shigeru Miyamoto.

These sketches in particular resonated with me, as I vividly recall drawing my own segmented grid-based maps. When Hyrule Historia constantly reiterates that Miyamoto had a hand in nearly every aspect of the original Zelda, it shows.

This section is heavily in favor of the more famous titles, so there are lots of materials from Ocarina of Time, The Wind Waker, Twilight Princess, and the original The Legend of Zelda (Twilight Princess has more art than any other game in this portion).

“Creative Footprints” mirrors some of the best parts of the first Skyward portion, with new concepts that never made it past the drawing board. Like the existence of an Oracle of Seasons/Ages Ganondorf that blew my mind (as opposed to Ganon, who did appear), and “GameCube Island” in The Wind Waker.

Since the popular games are featured, some sections are shorter than others. For instance, if you love Phantom Hourglass but hate Spirit Tracks, you’re going to be disappointed, as PH only gets a scant few pages while ST gets around 20.

Plus, since a little under half of the book is dedicated to Skyward Sword with the first and fourth sections, you’re going to be disappointed if your favorite game isn’t represented here. 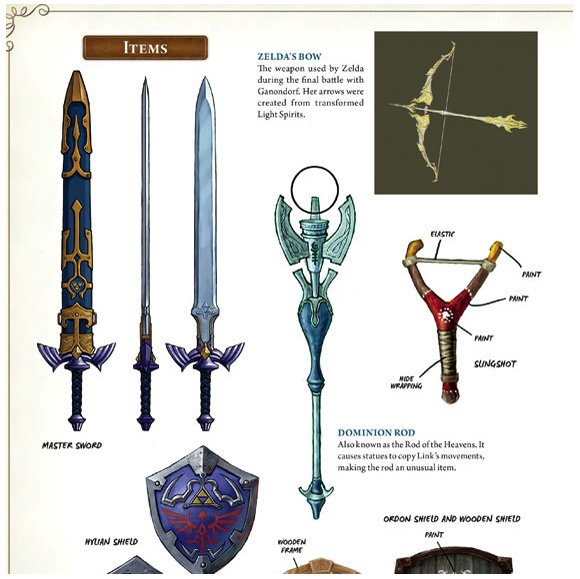 At the end of “Creative Footprints” is a list of games in the series. Again, some spinoffs aren’t included, which is a shame as this was the perfect opportunity to do so.

The only additional titles this section covers is the GameCube Collector’s Edition, Master Quest, and a very brief overview of the Satellaview Zelda games and Link’s Crossbow Training. This was probably the weakest part of the book and almost felt like an afterthought.

After all is said and done information wise, Hyrule Historia ends with a comic read manga style, right to left. The comic itself is a prelude to Skyward Sword, which might immediately turn some people off.

It features a a few beautiful full color pages, then the rest are traditional black and white. The story itself teeters on the edge of one of the more mature tales in the Zelda universe, but it’s over so quickly that it loses its luster a bit.

While I wouldn’t say it’s completely forgettable, it’s not really a must-read nor is it something that will stick in my mind every time I think of Skyward Sword. In the end, I kind of wish it was a bit more fleshed out and had a few more color pages.

So given all of this information, should you get Hyrule Historia? If you’re a general Zelda fan, it’s a no-brainer. There’s a decent amount of new information here, the art is beautiful, and the timeline section is great to have as a general reference for whenever you want to re-learn or decipher the story of one of your favorite franchises.

But if you’re a more casual Zelda fan and only gravitate towards a few select titles (like one of the more underrepresented ones), I’m not sure you’ll be wholly satisfied.

The book contains so much Skyward Sword that, if you don’t like it in some capacity, you may be disappointed. If you have no appreciation of the retro titles as well, the impact may be diminished, especially the portions involving Miyamoto and Aonuma.

Even still, Hyrule Historia is a great read. I learned some things both old and new, and I got to enjoy some beautiful art. What more can a Zelda fan ask for?