When a custom controller outfit offered to let us design our own tailor-made gamepad, it was a proposal we couldn’t refuse. Except designing things is hard. So we rolled the dice and left that task in their hands, hoping their imaginations would run wild. But not too wild. Just wild enough.

So when a black case from The Controller Shop turned up on my doorstep, I wasn’t quite sure what I might find inside. A one-of-a-kind DualShock 4? Maybe a Gardevoir plushie? It was a mystery. 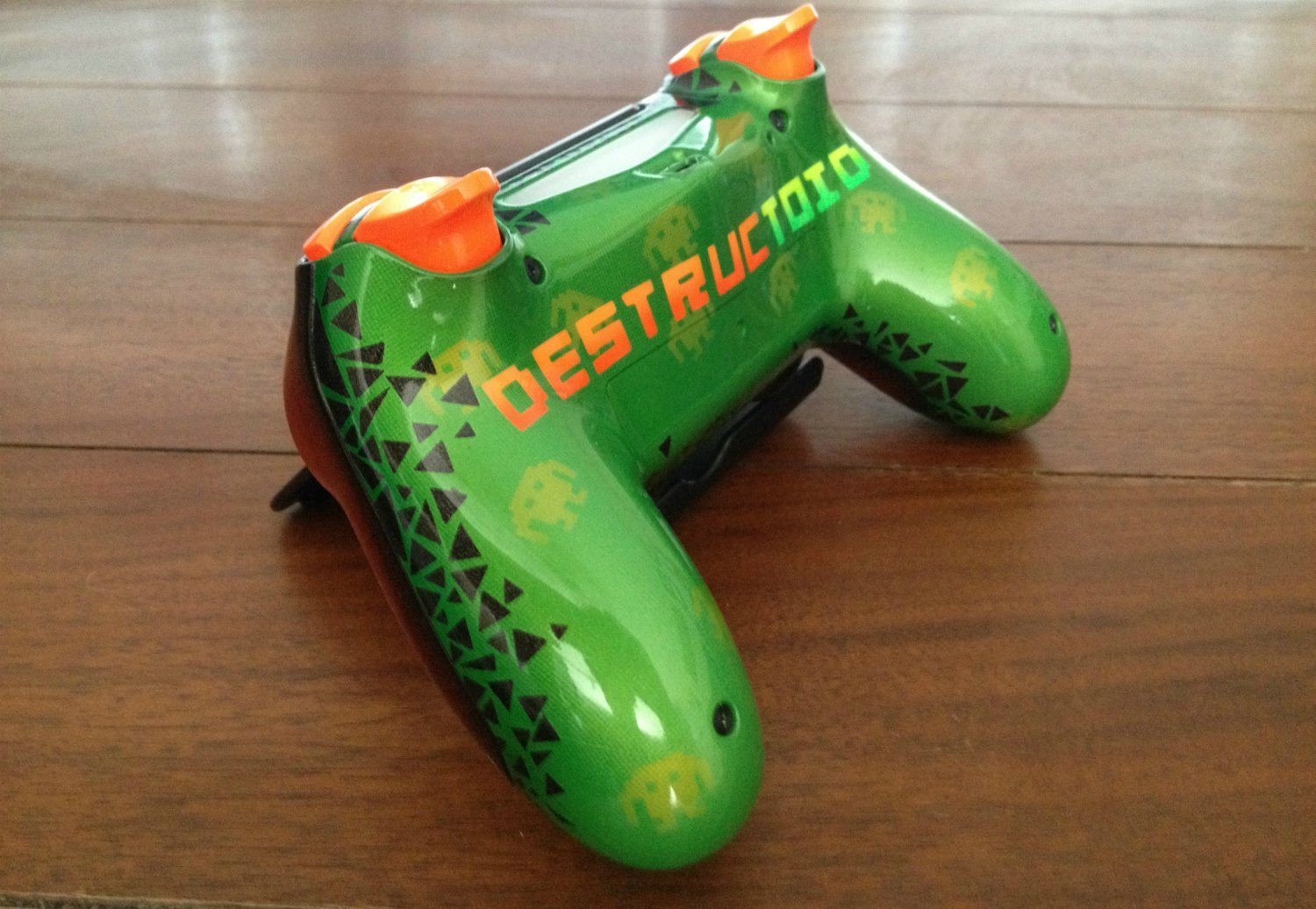 Okay, so maybe it wasn’t a complete enigma. Still, cracking the case open and laying eyes on the controller for the first time, I was taken aback. It wasn’t at all how I pictured it in my mind’s eye.

The thing literally glittered, metallic paint beaming in the sunlight, its splashy buttons distracting from the intricate detailed artwork in the periphery. It was shocking, really. Maybe a little gaudy. Certainly more than I bargained for, more vibrant and impressive than anything I might have conjured up.

My attention was soon drawn to the portrait of Mr. Destructoid along the left handle. At a glance, our robot mascot looked flawless, so impeccable that I figured it was a decal. Upon closer inspection, though, you can see its tiny imperfections. This didn’t roll off a conveyor belt in a factory somewhere. It was painstakingly rendered by hand, a labor of love. 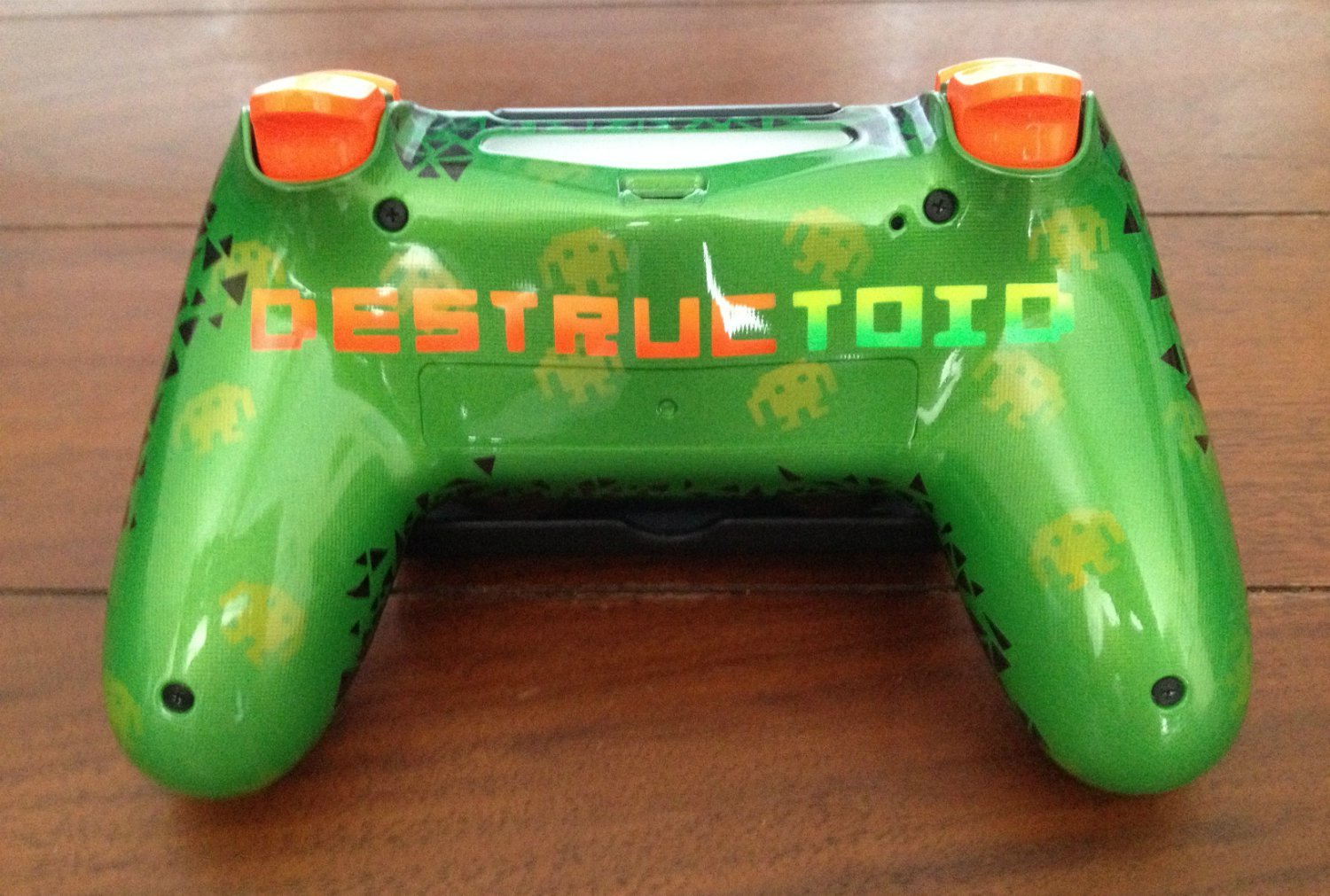 Subtle stripes and understated circuitry art accent the front panel, while the rear is underscored by a dozen or so little Space Invaders and an elaborate pattern of triangles clustered around the edge.

While The Controller Shop offers rear paddles (similar to the ones featured in Microsoft’s upcoming Xbox One Elite Controller) and foot pedal accessories, ours didn’t come included with any significant hardware upgrades. But that isn’t to say it feels identical to a standard DualShock 4.

The surface is more glossy than matte, and the anterior lacks the grippy feel of other DualShock 4s. Having spent an extended period of time gaming with it, I can’t say I prefer it over the basic edition, nor can I say it’s any worse. Just different. Though there are a few specific instances where I might favor one over the other.

In a side by side comparison, The Controller Shop’s face buttons feel more satisfying. They’re a tad clickier — if that makes any sense. The shoulder buttons feel slightly heavier. The biggest difference was the D-pad, though. It takes more effort to move around, making it feel ill-suited for fighting games or other genres where a more rigid range of motion might be an impediment. 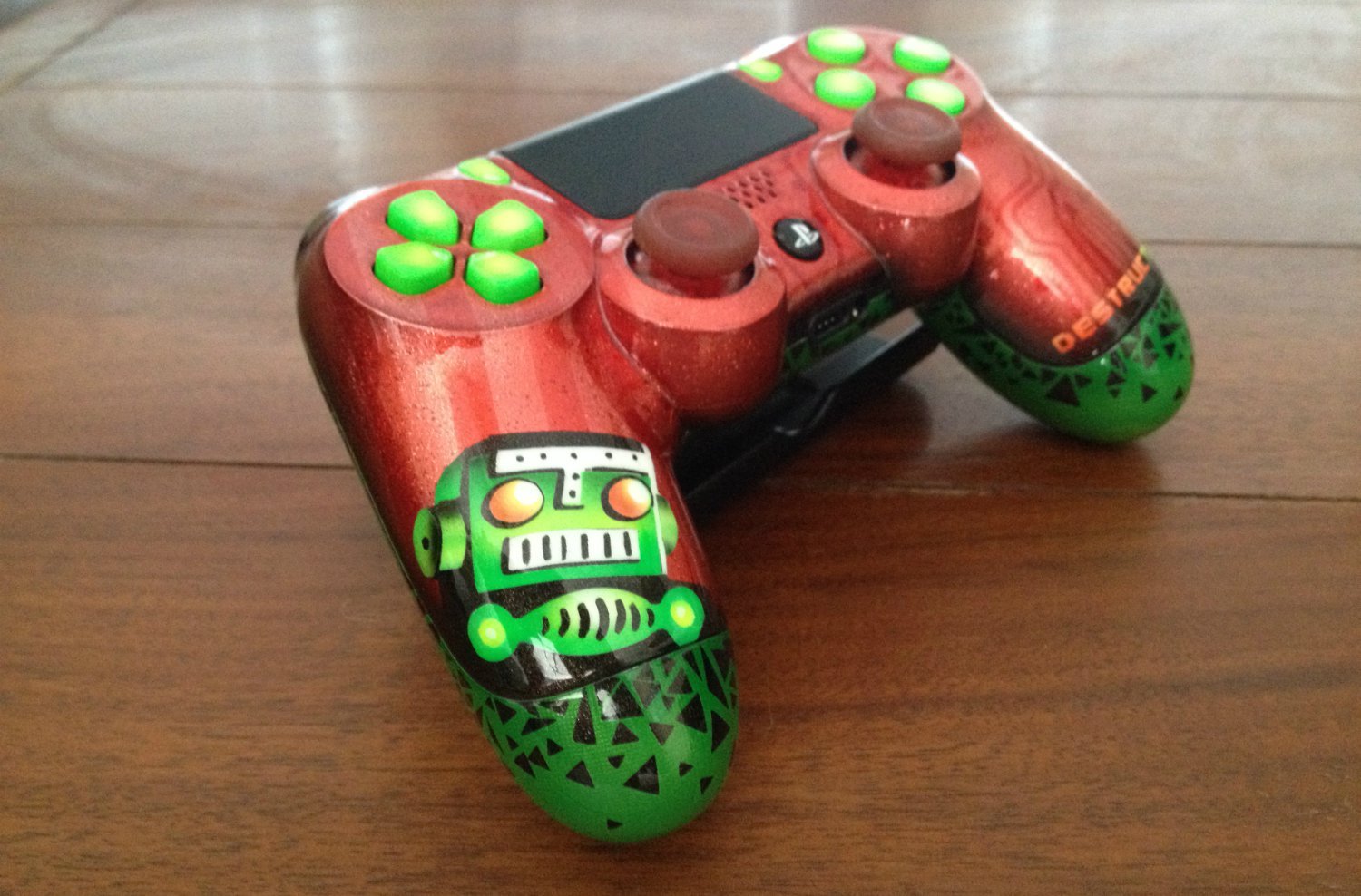 On the other hand, the analogs feel firm and potentially more durable, which could be a plus, given how the set on the standard model are prone to falling apart.

Whether or not a custom look and vaguely different feel is worth $100+ (or, in the case of this one, closer to $250 due to its hand-painted graphics and whatnot) is debatable and highly subjective.

I can say that if you’re in the market for such a luxury item, you could certainly do a lot worse. This may not have been the particular design I would have chosen for myself, but that was kind of the point. I wanted to see what The Controller Shop could do, and they produced a finely-made work of art that exceeded my expectations in many respects.

If you can afford to channel that craftsmanship into your own style, it might very well be worth it.

[This review is based on a retail unit of the controller provided by the manufacturer.]