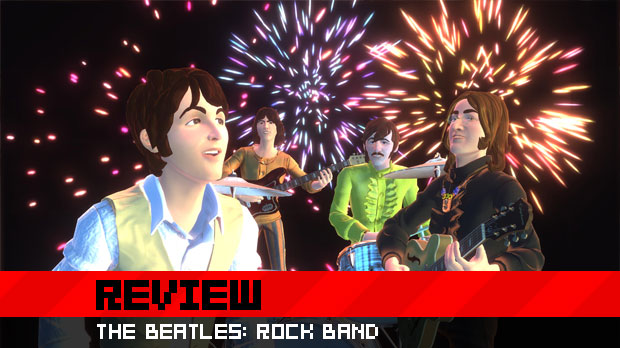 It’s a testament to the fact that it’s remarkable that the game even exists, given complicated music licensing rights and dealing with shareholders notoriously protective of the band’s music and image. Who can blame them? The Beatles are, after the all, one of the biggest and most influential musical acts, well… ever. Because of this, The Beatles: Rock Band may be the biggest collaborative effort in videogames, the result of unprecedented behind-closed-doors deals and the vision of hundreds of creative minds.

But is the end result any good, or is it a one-off, quick cash-in title that’ll soon be forgotten?

The Beatles: Rock Band (PlayStation 3, Wii, Xbox 360)
Developer: Harmonix Music Systems
Publisher: MTV Games
Released: September 9, 2009
MSRP: $59.99
The Beatles: Rock Band is like no music game that has come before it in that it feels, undoubtedly, like a self-contained musical experience. It’s a work of importance that easily deserves a place among The Beatles’ entire catalog of works, including such successful beyond-the-studio efforts like 1968’s animated Yellow Submarine or the live-action Help!.
Now, I say all of this without even touching on the actual gameplay of The Beatles: Rock Band, and it might sound like hyperbole. So allow me to explain.
From a gameplay perspective, The Beatles: Rock Band is based off of Harmonix’s successful Rock Band formula, a full-band gaming experience that you’re likely already familiar with. In most ways, it doesn’t veer too far from what you’d expect, with a few notable exceptions. 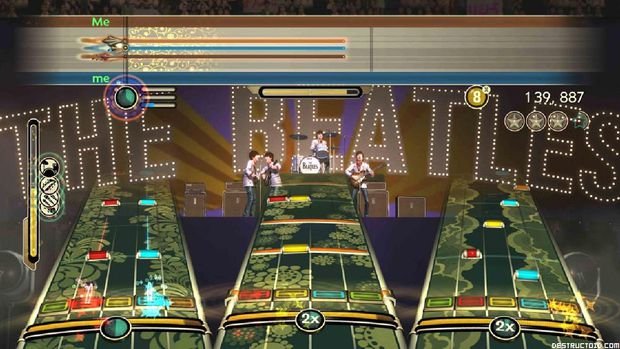 For one, the ability to allow for players to sing along with some of The Beatles’ rich three-part harmonies is nothing short of genius. The Beatles: Rock Band allows for up to three USB microphones, or supported wireless mics, like Microsoft’s LIPS peripherals. It’s true that the setup can be a hassle; connecting seven peripherals to your console at once and then strategically placing them around your living room can be a trying experience. But damn, is it worth it.
Nailing harmonies while singing isn’t the easiest thing to do, made even more difficult if you’re not immediately familiar with some of the game’s songs’ impressive harmonies and melodies. But the payoff is extraordinary, with two or three vocalists singing in perfect harmony. Where a single vocal track line once appeared, players must keep their eye on up to three, each representing a different part of the harmony. The lyrics for the individual parts appear above and below.
Sounds complicated? Well, it is — vocal harmonies are no joke, and unless you’re already familiar with them and the associated lyrics, the first few times you play through a song, you may make your neighbor’s dog cringe. But Harmonix did include a brand-new vocal training mode, one that allows you to isolate the different vocal parts for each song, even providing a guided pitch tone to help you along. The final result, provided you’ve got the chops (or are willing to work on them), is a marvelous feeling of working as a unified group. The bottom line is that the addition of the harmonies makes the gameplay of The Beatles: Rock Band feel unique, not simply Rock Band 2 re-skinned. 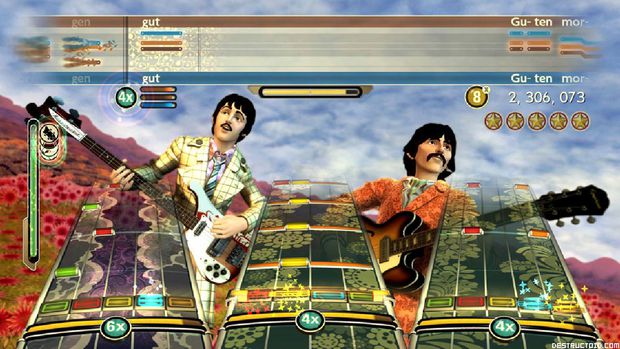 Fans of the series will notice a lot of similarities but will also revel in the small tweaks. For instance, when choosing your difficulty after selecting a song, a meter indicating how tough the song is appears on screen. Players can also quickly switch from lefty to righty prior to playing a song, squashing the need to navigate a flurry of menus when playing in multi-handed groups. The game’s quickplay song list also features some improvements, including the addition of being able to see the highest star count achieved per song. These are only part of the many minor changes that make the overall experience of The Beatles: Rock Band superior to previous games. (Many will be happy to note that some of these changes will likely make their way to Rock Band 2 as part of an update, if words that came out of Harmonix designer Dan Teasdale’s mouth at GDC earlier this year are to be believed.)
So from a gameplay standpoint, The Beatles: Rock Band stands on a solid foundation. Beyond that, as an experience that comfortably finds its place among The Beatles’ best work, the game is a triumph. It follows the band’s career, from the first shows at the Cavern Club to the late-career legendary rooftop performance as seen in 1970’s Let It Be. While the game’s 45 songs don’t even begin to touch the band’s expansive catalog, and many significant moments in the group’s career are overlooked, The Beatles: Rock Band acts as a brief, entertaining (and poignant) summary of the band’s relatively short time together.
Visually, The Beatles: Rock Band is spectacular, not simply because the stylized character models bear impressive likeness to their real-life counterparts. Sure, the shaggy hairdos and the Ed Sullivan Theater of the band’s early years are faithfully recreated. And the studio setup at Abbey Road bears a striking resemblance to the real-world location.
But it’s the game’s Dreamscapes, the psychedelic otherwordly environments inspired by The Beatles’ music and associated album visuals, that shine. Ranging from psychedelic colors splattering the screen to the more intense, surreal worlds of “Octopus’s Garden” and “I Am The Walrus,” each song’s associated visuals aren’t simply a cut-and-paste job. Each, in its own right, is a work of art inspired by The Beatles and brought to life in a way that feels familiar, yet altogether fresh and exciting. 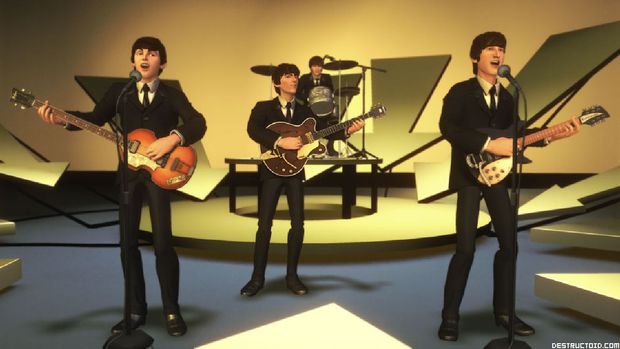 As far as the soundtrack is concerned, 45 songs may not seem like a lot of music, particularly when you compare it to the recently released Guitar Hero 5 (80-plus tracks) or even last year’s Rock Band 2. Unlike those other titles, not a single song is a dud — it’s entirely possible that The Beatles never really wrote a “bad” song. I say this as one who admits that he’s never been a huge fan of The Beatles, but never once found myself disappointed that I was being “forced” to play any given track. Because of this, while every song may not have been a Beatles song you would have chosen, there simply aren’t any real low points. It should be noted that even the most difficult songs (which the game refers to as “Demanding”) aren’t the finger-blistering and beat-blasting experiences that some advanced players may be used to.
Unlike games such as Guitar Hero: Metallica, Guitar Hero: Aerosmith, or other band games, The Beatles: Rock Band simply contains songs by The Beatles. While this isn’t surprising (it’s called The Beatles: Rock Band, after all), it’s important to note that. If you simply dislike The Beatles’ music, there’s a chance that hearing the songs again may change your mind, but know what you’re getting yourself into. (Example: in my teenage years, I was adamant about this fact; my tastes later matured and I got over myself.) You won’t be playing any songs by artists who were influenced by The Beatles here. If that’s what you’re looking for, pick up any music game; chances are that all of the musicians included in those games, in one way or another, were.
For fans of The Beatles — especially ones who would go as far as to call themselves “Beatlemaniacs” — the game is absolutely essential. It features a slew of unlockable material, from photos to full videos, some of which have never been seen. Loading screens also feature never-before-heard audio from inside the Abbey Road studio, including the band chatting with one another, tuning, or rehearsing. 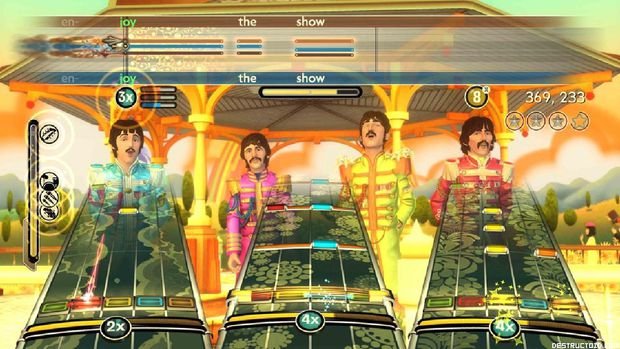 Any complaints or worries I had about The Beatles’ music not following the downloadable content model adopted by MTV Games and Harmonix have been washed away. By the time we had launched into our second or third “Dreamscape,” it was obvious — no one is more fit to perform The Beatles’ music than The Beatles. Watching a Rock Band 2 goth avatar calmly singing “Dear Prudence” on a stage bursting with pyrotechnics would seem absurd after the careful handling of The Beatles: Rock Band.
The question has never really been, “Do The Beatles deserve their own game?” In a space where single-band titles are inevitable, there are few bands that truly do deserve to get this kind of treatment. In this case, Harmonix has treated the band’s music, art, and history with a respect and reverence that sets it apart from other similar collections. The question is, how will anyone held responsible for a full band game — Harmonix or otherwise — ever really be able to clear the bar that’s been set?
Score: 9 — Superb (9s are a hallmark of excellence. There may be flaws, but they are negligible and won’t cause massive damage to what is a supreme title.)