When you create a new IP from scratch, it’s pretty much a given that you’ll have to go through a lot of the design phase until you land on an idea that jumps out at you. The developers at Respawn Entertainment had no idea what their new title would be, and the concept art they designed shaped what would eventually become Titanfall.

Thankfully, Titan Books has seen fit to share these designs with us. If you enjoy behind-the-scenes looks at the design aspect of game development, this is prime example of how to showcase it right. 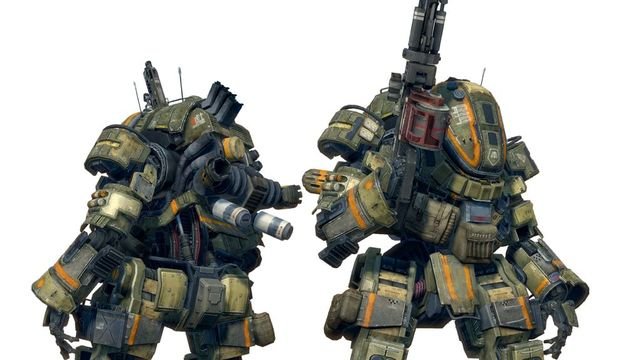 The Art of Titanfall is an impressive tome. At 192 pages, it’s nice to see that no details have been spared. Or at least, that’s the impression the book gives, as it delves into so much thorough detail that I’m not sure Respawn didn’t given them every single asset from the game.

Beginning with the Titans themselves, the book details all the different classes, as well as intricate cockpit views and brief descriptions detail how they went from drawing to concept renders, some even before it was decided the title would be a multiplayer game. The Ogre, Atlas, and Stryder are each given several pages of detailed paintings and renders, and are described with little details that most may not pick up on while playing the game, such as Atlas not being so named for the mythical character, but rather for the globe-like “head” so you can tell where the Titan is looking.

Character models of the pilots, militia, grunts, and creatures round out the first section, with minimal details. While the different types of soldiers and such each get a brief description to go along with the specific characters, the creatures don’t fare as well. I would have liked to have seen a bit more in the creature department, as we really only get a few sketches in that section, but the rest of the book more than makes up for it. 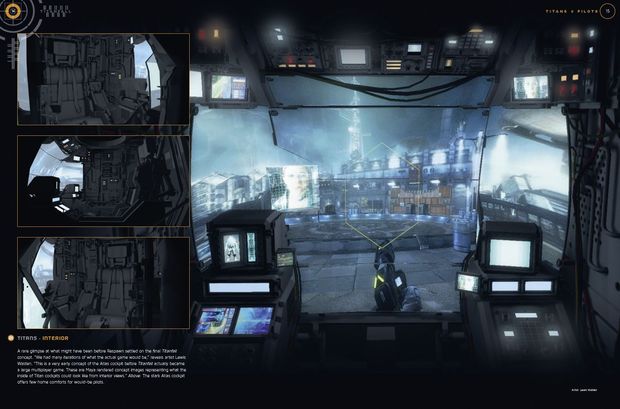 The vehicle section is truly impressive, with practically each spaceship, aircraft, and ground vehicle getting full-page representation, mixing between sketch and final render, and sometimes both. There’s also an extensive section on the weapons and tech of the game, from assault rifles and drones, to gorilla tanks and rail guns, each getting a brief description on design. For fans of the game, the level of detail here is impressive, but the next section will really be what most players of the game will enjoy.

Each of the locations in the game are all represented here, with beautiful detailed renders are paintings of each locale, some taking up full two-page spreads. It always fascinates me how much detail goes into concept art, with each little sign, plant, and bullet ricochet painstakingly visualized. Don’t expect it to showcase each choke-point or focus on strategy placements here, as these are more focused on the design aspect of the level. The industrial  dockyard of Angel City, the cold sterile environment of the Colony, the sheer staggering size of the Boneyard are all given multiple pages to pour over, giving more background detail as to what each of these environments represents in the world of the game, and how their design came about. The locations section is easily the biggest part of the book. 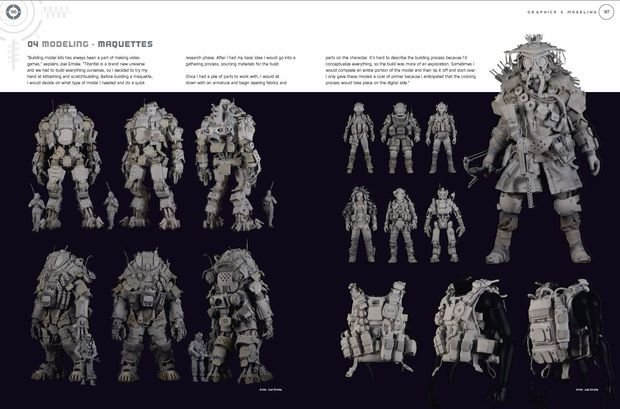 My favorite section, however, is the final one: the Graphics and Modeling section showcases the signage you may not really notice in the background of the levels, as well as the physical maquettes made to show how the Titans and pilots would look in 3D. These models are all hand made from scratch bits, and it’s a neat inclusion in the book. However, these can’t compare to the full-sized Titan that was built for E3 2013. Damn, that thing is impressive.

There’s a lot of detail in this collection, and practically every description along with the art has quotes from the development team or artist involved in its production. There’s a lot to absorb here, but if you’re drawn into the world of the game, this is a great companion piece.