I have always had a certain fondness for the Terminator films, even though I struggle almost daily with the way time travel apparently worked in the series. Maybe they’re using some sort of non-linear model of time that I simply cannot grasp, but I don’t understand how it is that John Connor can send his own father back through time to impregnate Sarah Connor (thus bringing John into existence).

Nevertheless, I have endured because the films have largely been fun romps. Games based on these films, on the other hand, have not traditionally managed to overcome their own shortcomings in such a way. But it’s a new game and a largely new vision of Terminator, where the war against the machines is no longer a looming, shadowy future but stark reality. Things could be different this time.

Is this game the salvation of the series or is it high time the franchise experienced its own Judgment Day? Read on.

Terminator: Salvation is a fairly straightforward shooter. Players control John Connor in a story which takes place two years before the events of the recently released film of same name. The so-called “hero of the Resistance” has yet to assume his destined role, and things look dire for the continued existence of humanity. This particular story begins with Connor’s resistance unit being called to evacuate the Los Angeles warzone, finally routed from the city by SkyNet forces.

When a distress signal is received from another unit trapped within the heart of the city, Resistance Command decides to abandon them, and Connor is left with a choice: Follow orders and live to fight another day, or act in defiance and strike out on his own to rescue his comrades.

At the risk of sounding arrogant, I fear that I have made this sound more interesting than it actually is. The story is beyond boring, the sort of thing that would take up two paragraphs in a biography on Connor’s life. This is due in no small part to the characters which reside within it. Connor is joined during the course of this campaign by a number of individuals, all as bland and underdeveloped as the next, and are voiced by actors who seem to be calling in their performances. When these characters attempt to do anything dramatic, the motion falls utterly flat, as it is completely impossible to give a damn about any of them. 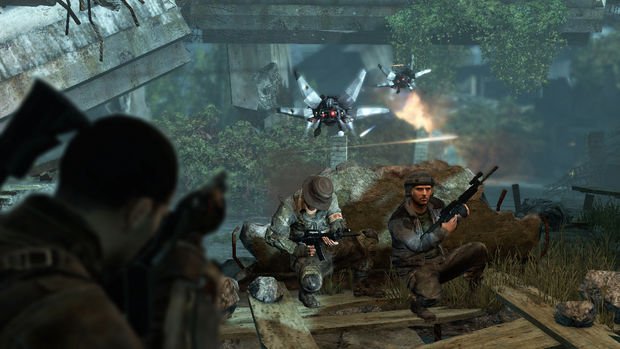 From a technical standpoint, the game is poor on many levels. For the in-game humans, character models and animations are ugly and stiff. Machines fare a little better in this regard, but not much. Outdoor environments — while certainly brighter than many of the genre’s contemporaries — are bland. It’s very easy to get turned around in a location because every location looks pretty much the same.

Worse still, there are a variety of bugs, many of which are game-breaking. Enemies which are supposed to burst forth from walls will occasionally get stuck in their spawn points, unable to move and incapable of being shot. Since all enemies have to be cleared from an area until the game can progress, the only option is to load from your last checkpoint. One sequence about halfway through the game suffered repeatedly from crashes while attempting to load after death.

The upshot of that latter bug is that you can spend as much time as you want playing with the game’s loading screen, a highly detailed animated 3-D image of the iconic T-600 skull. Using the analog sticks, this image can be slowly rotated to enjoy all of its various facets. This is easily one of the game’s best features.

Another great feature is its running length, a whopping six to seven hours. Under other circumstances, this would be considered a shortcoming in a game. Ultimately, it winds up being just long enough to take the player to the brink of wanting to break the disc in half out of irritation before it ends. 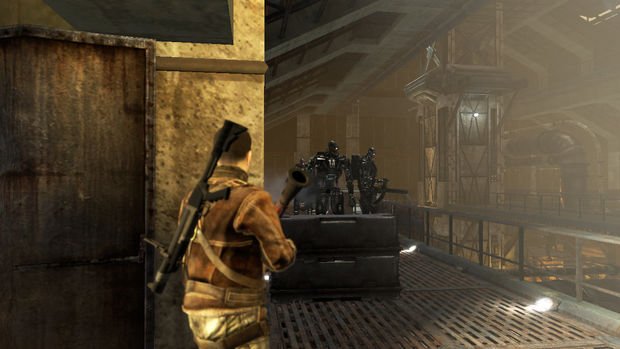 Gameplay takes two forms — third-person missions on foot and on-rails shooting sequences. The former makes up the bulk of gameplay, with machines cropping up anywhere that there are clear groupings of objects to be used as cover.

Cover mechanics work pretty well, with players able to move smoothly from one spot of cover to another by pointing towards the direction of their desired location and hitting a button. Moving to a new bit of protection is made very easy. Exiting cover, on the other hand, is often unresponsive and your character will frequently just sit right where they are until you’ve given the command to stand up half a dozen times.

All of the levels and the most frequently encountered enemies are designed around the use of cover. Areas where you engage the machines all have a very clear path or two which allows you to flank your opponents. This is especially necessary for the robotic enemy created specifically for the game, a spider-like monstrosity called a “T-70” (or, according to the game’s subtitles, “T-7 T”). This enemy has a very clear and quite large target on its back which can be exploited, which you must, as its front is heavily armored. 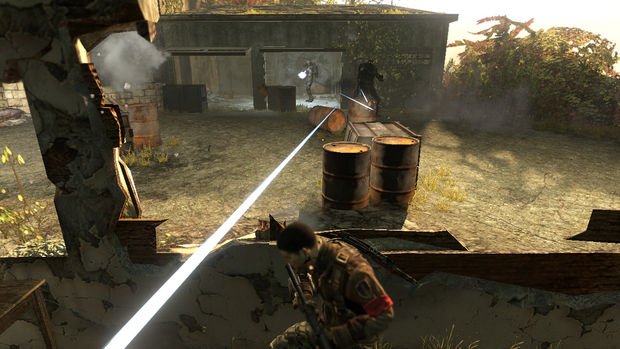 Playing the game basically boils down to running into an area, letting your NPCs deal with enemies until you’ve moved to a safe position behind the foes, then shooting them down. That is, in theory. In practice, you’ll move around to the side, likely get seen and be fired upon and then have to sit in your preferred position waiting for the robots to turn around. Since the machines only respond to stimulus (i.e. being shot at), the only way they’ll take their cold, metallic gaze off of you is if they begin taking damage from another location.

Herein lies the biggest problem with Terminator: Salvation. The NPC characters who accompany Connor on his mission are useless in a firefight where strategic considerations have to be kept in mind. When given the choice between shooting at a small, flying drone which does little damage and killing the massive robot which has pinned down their teammate, the NPCs always go after the little guys. Always. If you happen to be the guy who is trapped under heavy fire, you could be waiting a very long time indeed for them to become distracted.

What results is a game that is alternately boring and frustrating. Your choices essentially boil down to sticking your thumb up your ass while waiting for the constant hum of ammunition from an enemy to cease or standing up, getting shot a bunch of times and hoping that you can kill a Terminator before it can kill you. This assumes you’re only up against one Terminator, which is also unlikely. 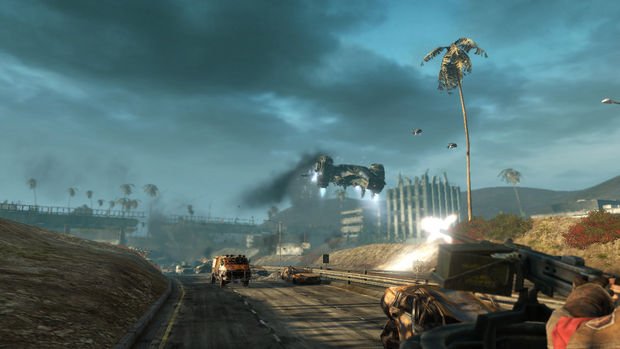 The only real way to avoid this situation is to play with a friend in the game’s local splitscreen co-op mode. This makes the game somewhat fun to play — if only so you can have someone to laugh at things with — but destroys any semblance of difficulty, which apparently relies solely on the bad AI. The capability for partners to revive each other and actually having a brain to work with takes all the teeth out of the experience. While the Hard setting is a bit challenging, due to increased damage and enemies having greater resistance to weapons, anything less than that is a stroll in the park when you team up with a player competent with shooters.

The on-rails segments of Salvation aren’t anything to write home about, except for the very last one. Until this point, all of these levels have consisted of using a mounted machine-gun or rocket launcher from the back of a vehicle to shoot motorcycle drones and other robotic nasties. The final sequence, however, constitutes the only real, “OH SHII-” moment the game has to offer. This may have largely been due to hours of being annoyed with the game, but I found it to be quite satisfying and would go into more detail but anyone who volunteers to suffer through this game probably deserves to have the reward of enjoying the surprise. 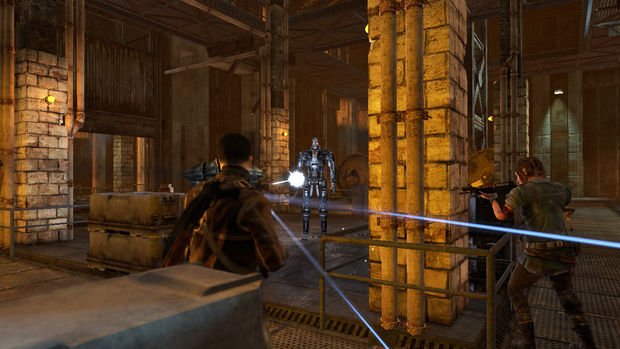 Don’t buy Terminator: Salvation. In fact, if you are anything but a hardcore fan of the Terminator franchise, don’t even rent it. It isn’t worth your time for the 30 seconds worth of fun that it produces. If you absolutely must know what happens to John Connor during this period, the only advice I can offer is to bring a friend along for the ride. They may hate you for it in the end, but at least you don’t have to suffer alone.