Our original review of Taxiball was flawed. As explained by a Self-Aware Games developer, the iPhone 3.0 software update crippled movement in the game, and his studio was kept from putting out a patch that responded to the issue. I obtained a bad version that no longer reflects what is available on the App Store, thus the need for a re-review. So here’s a second look at the game. (You can still check out the original review here if you’re curious.)

As for what I discovered, well, that would be breaking the suspense. Hit the break for another review. 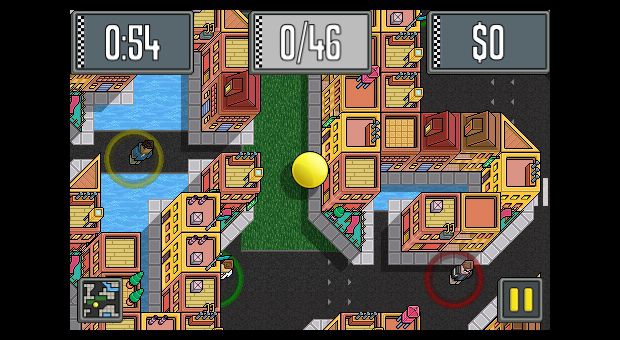 Imitating the core formula of Crazy Taxi, this game is about escorting people to a destination in obstacle-laden environments within a small time frame. There are no cars or goofy-faced, catch-phrase-slinging drivers. You control a yellow ball with the power to suck potential passengers to its top with an invisible beam. This isn’t a thinking man’s game. It’s geared towards anyone with minutes to spend or people who feel the need to practice the fine art of rolling driver-less yellow spheres with accelerometers.

Every level has a set number of passengers that need ushering to nonsensical locations of their choice. Levels are timed and so are the passenger deliveries. There aren’t any KFCs or Pizza Huts, but most of the top-down environments have a city-like feel, which is even more odd, considering you’re steering a ball instead of a car.

Tilt finesse is a requirement. The ball can roll in eight different directions, its speed variable depending on how steeply the device is tilted or whatever obstacle is weighing in on the motion. Unlike previous versions of the game, the ball no longer feels like it’s filled with lead, bricks and rocks. It’s responsive to the tilt, which is a great thing — you need to be able to consistently stop the ball in areas of interest, either to suck in a passenger or deliver one to a checkered destination zone. 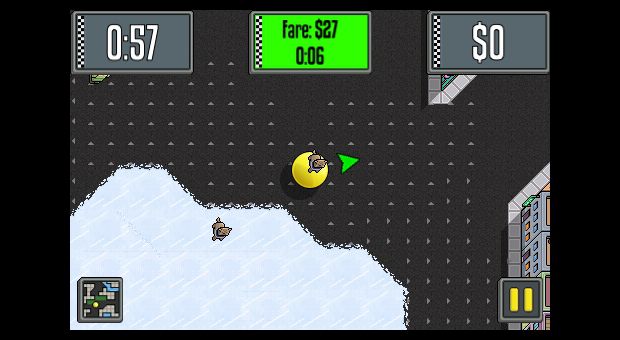 Avoiding environmental obstacles is vital to the experience. Each level is jammed with nasty bits that can blast your ball into the sky, cause it to slide, or reverse its direction. I still can’t do what I want to do with the ball when confronted with obstacles. I still want more from the controls.

Levels are cluttered. Most of what I’ve seen are labyrinthine messes of narrow corridors, oddly placed buildings and an excessive amount of traps. There’s no rhyme or reason to where things are placed. It’s bad design that, in turn, cripples the experience. Passengers need to reach destinations within a certain time limit. Falling into the water or knocking into the corners of buildings while attempting to shoulder through a narrow gap costs precious ticks. Even if you succeed in delivering the person, the level itself is timed, so you’ve lost some seconds regardless of your heroics.

You can see the player drop-off in the spectacularly cluttered Megalopolis level. During this re-review, I was able to only grab eight or so people (out of 40) and deliver them. I ended up in the high 200s in the leaderboards, as opposed to the first few levels, where I placed in the thousands. Navigation is still an issue. 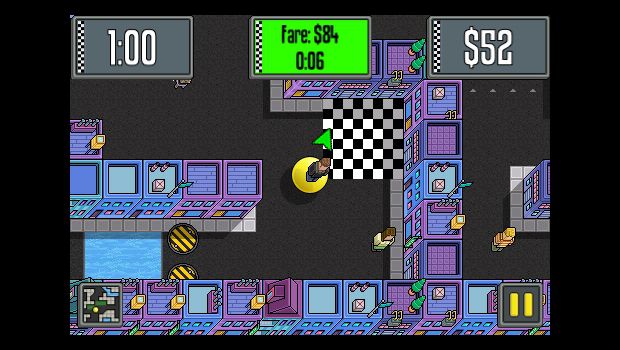 When you can deliver passengers and find that sweet spot with the accelerometers, this can be a decent diversion, but nothing more. Progression is in chunks, which makes playing the game on the go stomachable. Putting people where they desire to be earns cash, which in turn unlocks more levels. It’s that simple.

One particular bright spot is the guidance system. When you grab a person, a small arrow acts as an on-the-fly guide to the destination. A massive map can be accessed as well, complete with multi-touch controls that allow for zooming and dragging. There’s a drawback with this. You’re not rolling — the game’s bread and butter — when you’re busy gazing at the map. It’s a momentum breaker born out of a need to traverse the cluttered maps.

The visuals are bright and cheerful, an artistic recreation of pixel art. The playful music complements the style and isn’t annoying. This is one of those rare mobile titles where I didn’t feel the need to use iTunes to supplement the experience. 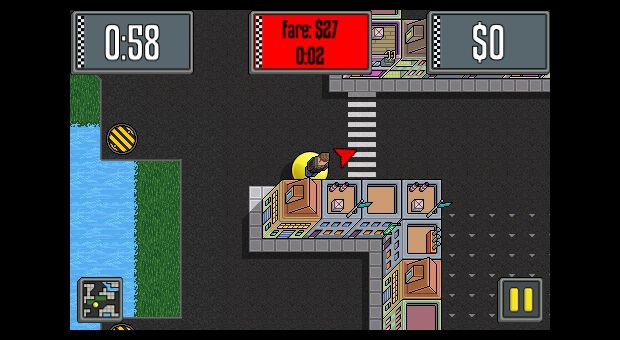 There are tons of in-game rewards that can be earned while playing, most of them requiring a level of skill that I can’t achieve. Despite the latest patch, I’m still having trouble moving the ball around the environment. This time, the labyrinthine level construction pops out as a greater villain. At $2.99, this title doesn’t fit the price tag, but you could do far worse on the App Store.