Remember those dreary afternoons you spent huddled in a Crazy Taxi arcade machine, frantically pumping pedals and taking pedestrians to the nearest KFC? I don’t, either. The arcade in my shanty town was nothing more than a gaggle trickster machines the stingily rewarded players with tickets by the time I was old enough to appreciate videogames. But I do remember playing Crazy Taxi a time or two before it folded.

Look, there’s a connection between Taxi Ball and Crazy Taxi. Both games have the word “taxi” in their titles and both revolve around taking dumb people where they want to go in a sprawling city. The differences, of course, are wide. Taxi Ball is a top-down game with touch controls and a wonky physics engine. Crazy Taxi was a silly rear-view almost pseudo-racing title. In Crazy Taxi, you drive a car. In Taxi Ball, you drive a … ball.

It’s that simple sometimes. Hit the break for the review. 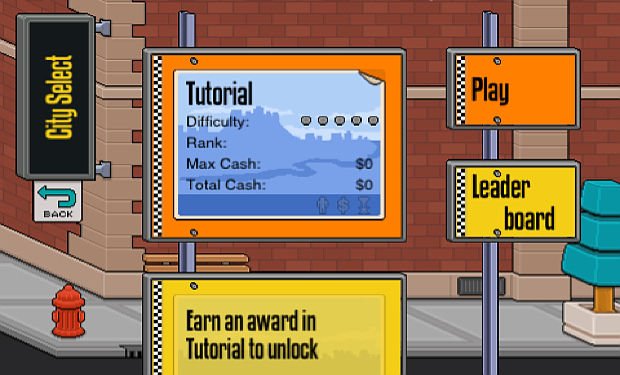 SEGA’s Crazy Taxi isn’t my jam. Large cities crammed with KFCs, cardboard people, and outdoor dining furniture don’t thrill me. Driving around these pointless towns and escorting the silly little cardboard people to various locations never tickled my fancy. But I think I can appreciate why people enjoyed Crazy Taxi. Getting somewhere fast can be entertaining in the right context.

Self Aware Games’ Taxi Ball borrows heavily from Crazy Taxi. In Taxi Ball, you control a taxi-like yellow ball whose mission is to convey idiotic passengers from one location to another. There aren’t any licensed stores, patios to wreck, or even stop lights to run in the game. Taxi Ball’s twist isn’t on the zany or zestful nature of SEGA’s timed escort element, either. It’s on the, er, driving.

To move around the game’s map and snatch passengers, you need to tilt your device while it’s in the horizontal position. Tilting up moves the ball northwards, tilting it down moves the yellow sphere southwards, and so on and so forth. 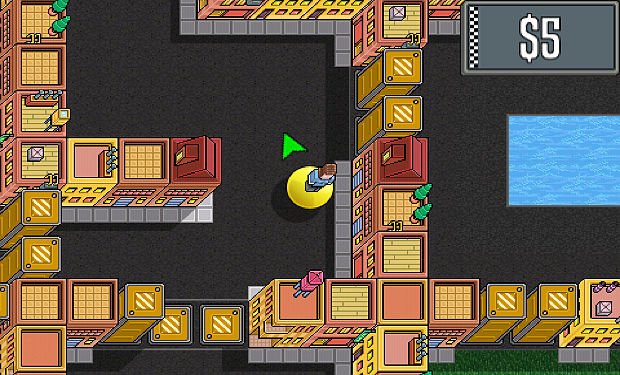 Stopping requires finesse, a subtle wrangling of physics. You’ll need to learn how to slow the ball if you plan on picking up any passengers or dropping them off at their goal location. While stopping does require a smidgen of skill, you won’t often be stressed by the action. The ball is rather weighty, and thus, its movement is sluggish — a problem with the core game, I believe.

When you design a game based on player’s ability to get somewhere fast, it’s not a good idea, I’ve learned, to create a sluggish vehicle that the player routinely has to drive over environmental objects. Some of the game’s two-dimensional maps are filled with numerous off-scale houses, giving them a city-ish feel. There are tons of pitfalls in each locale — ice roads, lakes, springs that spin the ball to the air, and even one-directional movement strips — that make delivering a psassenger difficult. Getting the ball to the obstacle isn’t the problem; traversing the city-ish landscape is. 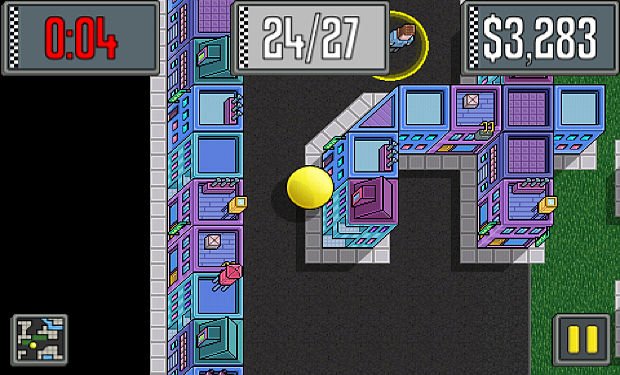 Finding a location is a breeze because of the game’s detailed mini-map. It reveals everything in the level and doesn’t cost you any time. When the map is pulled up on the screen, the timer stops. This is a nice touch considering the vast and sprawling nature of the maps (sometimes too sprawling).

In order to progress in the game, you’re required to earn an award in a level. Considering I’ve yet to master the art of traversing — which I believe to be nearly impossible — I haven’t seen many of the locations (four, to be exact). The award appears to be earned after you completed a little less than half of the passenger deliveries, which, by the way, are numerous. There are always around forty people with somewhere to go waiting in the streets to be picked up.

If you’ve been keeping count, you may have noticed I’ve only harped on one aspect of the game — the ball’s weight. There’s a reason: the weight is a dealbreaker. In order to have massive success and not just crawl through the game feeding off luck, you need to get places fast. I still can’t do that reliably after several hours of play. 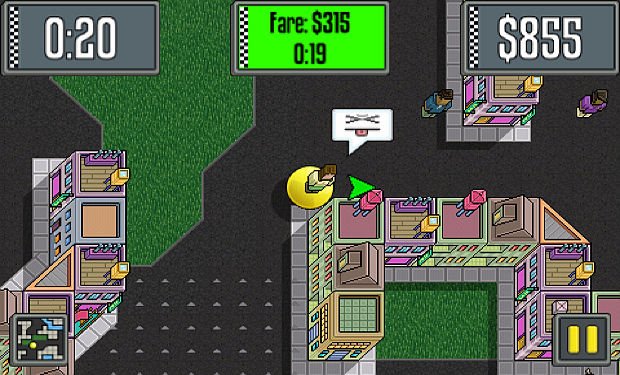 The maps I’ve fiddled with are too expansive and often too clotted with hazards. There’s a pitfall per second in Taxi Ball, which in turn, created an unfulfilling experience for me. Ushering passengers to their locations is rough work thanks to the numerous sharp corners of buildings and maze-like quality of the levels in addition to the level’s oddities.

Also, the control is horrendous. You simply must play this game in the horizontal position while looking over your iPhone. You can’t play with your neck at a right angle, or the game’s physics start getting screwy as you accidentally tilt your hands or mobile device.

Taxi Ball isn’t a terrible game — there are far worse on the App Store — but I can’t recommend it to anyone looking for a better-than-average experience. The price point is nice, certainly, but the game isn’t worth your time.