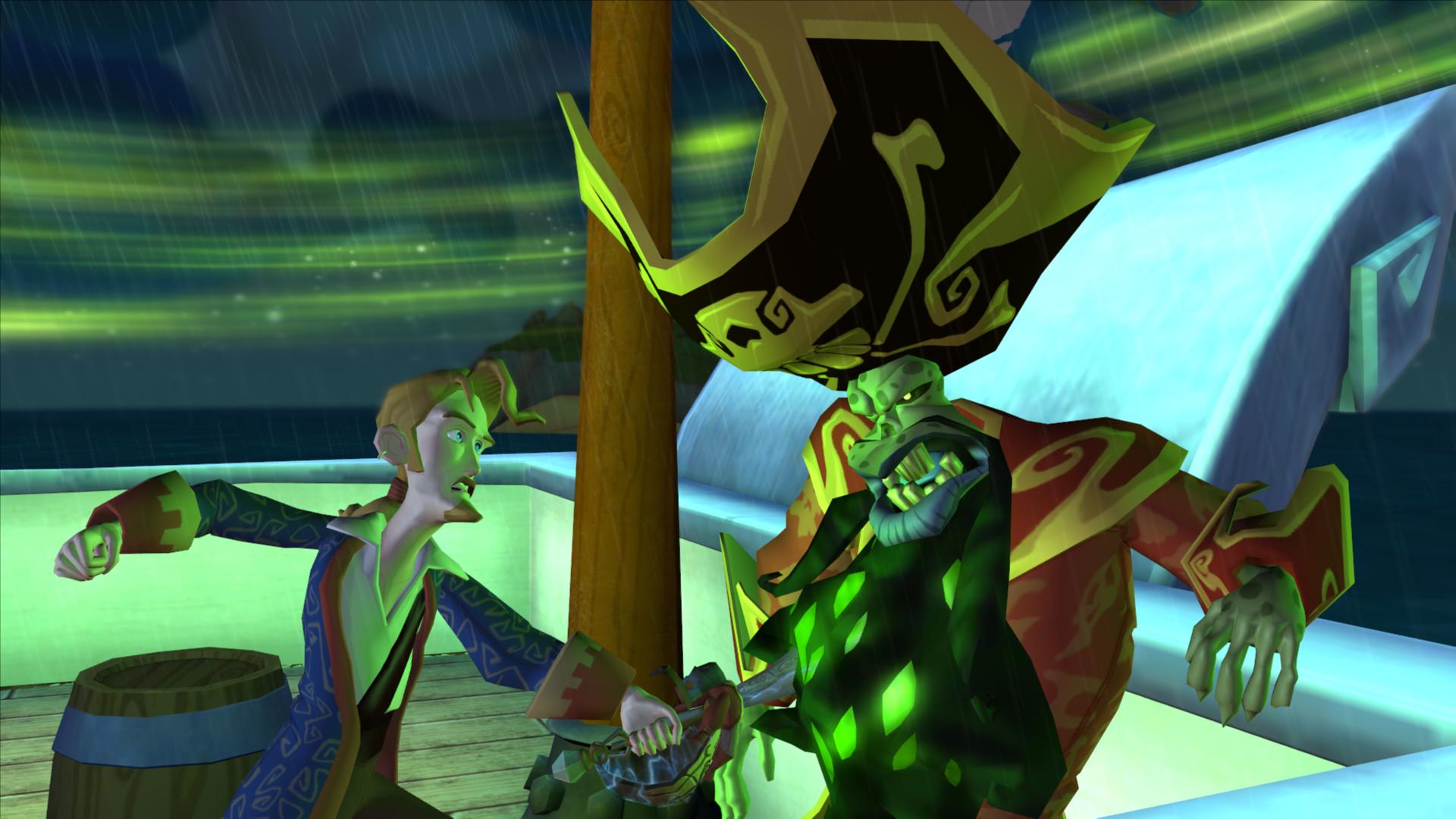 Escape from Monkey Island wasn’t terrible, but it certainly had its share of problems. Released in 2000 for the PC (and 2001 for the PS2), the last Monkey Island title was a mash of old-school throwbacks (“Insult Sword Fighting”) and poorly designed fresh elements (“Monkey Kombat”). It was enough to make more than a few fans step back and consider if the franchise could continue on in a new generation.

Eight years later, we have our answer: yeah, it totally can. Telltale Games has just released the first episode of Tales of Monkey Island, “Launch of the Screaming Narwhal.” This new, uh, title stays true to the franchise’s roots and doesn’t have any nasty surprises. Or does it?

Follow Brad Nicholson and Conrad Zimmerman below the fold to find out in the Destructoid review of Tales of Monkey Island, Chapter 1:  “Launch of the Screaming Narwhal.”

The first episode of the Tales of Monkey Island series won’t astonish. It’s a point-and-click game that adheres to the adventure mold: collect this item, search this pair of panties, talk to this person, and do this task in order to progress to the next set of challenges. But what doesn’t inspire isn’t always bad. “Launch of the Screaming Narwhal” is a genuinely funny and intelligent diversion that gives serious acknowledgment to its source material. The game functions as a looking glass for me, a view into my gaming past when thoughts of Loom, Quest for Camelot, or King’s Quest IV invaded my dreams and controlled my waking life. While I enjoyed “Launch of the Screaming Narwhal” for its colorful characters, vivid visuals and fun puzzles, I never shook the ghosts. To be honest, I didn’t try or care. This first entry is a magnificent and dazzling follow-up to the core Monkey Island series. It is everything that I want and could ask for from a new Monkey Island title.

“Launch of the Screaming Narwhal” relies heavily on inventory interaction. There are few puzzles where a simple combination of items or the utilization of a tool found in the environment doesn’t hold the answer. While archaic, it sticks strictly to the genre — one that I’ve yet to burn out on, so I still enjoy that.

The game opens with Guybrush Threepwood in a familiarly dire situation: the evil pirate LeChuck has Elaine in his undead-ghoulish-voodoo-infected clutches. The tools for saving the damsel are (mostly) in Threepwood’s hands; however, a botched spell creates even more havoc and spirals a routine mission into an episodic series.

After the short battle with LeChuck, Threepwood washes up on a troubled island — excessive winds allow no ship to come to port unharmed and ensure that no ship can leave. Also, Threepwood has acquired a misanthropic hand as a result of the backfired spell — a plot point that may stretch the whole of the series.

A fickle journalist approaches Threepwood after his unceremonious landing and makes the goal of the episodic journey clear: by doing piratey things, Threepwood will be able to learn how to leave the island, and therefore get back to saving Elaine and stopping the now-merely-evil-pirate LeChuck.

The narrative is lighter than it seems. Like the Threepwood of old, Telltale’s mighty pirate is delightfully inept and witty. The characters on the island (where 90 percent of the game takes place) are quirky and helpful, though the tools and hints they give and rarely seem pertinent to the quest. Elaine’s plight never feels like an urgent matter to be dealt with — the game’s warmth and humor kills it.

As with all adventure games, the keys to success in “Launch of the Screaming Narwhal” are the keys themselves: finding the right items and putting them into the correct places. As I alluded to previously, the items you receive or find seldom seem relevant to what needs to be solved. While this brings levity, it can also usher in frustration. After all, who readily realizes ink does that.

Then again, the loose connections between objects — sticking a cheese wheel in a silly location or a mini-bomb there — are what make Monkey Island so special. Without these humorous inventions of the designers, the game would be a flat mess. It takes a bit of brains to sort through what is given and because of that, it always feels rewarding to discover the proper function of an item.

The only substantial issue I have with “Launch of the Screaming Narwhal” is irrelevant: I want more. This episode will take most players between four and six hours to complete. I was actually saddened as I watched the episode unfold, knowing I would have to wait to return to the glorious Monkey Island universe again.

“Launch of the Screaming Narwhal” is a solid adventure title with a bunch of style and a ton of character and humor. My love of Monkey Island should be noted, of course, but it’s hard to ignore what’s at work here: the style, wit, and puzzles make this a wonderful adventure title worth the price of admission. Check it out.

Apart from its story, the episodic nature and that the game is totally in 3D (Escape from Monkey Island, while featuring 3D environments, used 2D backgrounds), Tales of Monkey Island is nearly indistinguishable from any other title in the Monkey Island series of games. For fans of the adventure genre, this is good news indeed as this particular franchise is a much beloved one and few things could be worse than mucking with an established formula with such a pedigree behind it.

Guybrush Threepwood is very much the same mighty pirate that we’ve come to know and love over the years. He positively brims with blind bravado and his ineptitude remains as charming as it has always been. Similarly, other returning characters look and sound exactly as you expect them to. They look so good, in fact, that they appear as though they leapt right out of the pages of a concept artist’s drawing pad. The downside to this is that Tales of Monkey Island requires considerably more powerful hardware to reach the higher resolution levels than the developer’s other titles, however, and weak PCs may struggle a bit to play it.

Telltale has opted to include a considerable amount of fan service as well. It’s not limited to Monkey Island either, but spreads rather nicely across franchises from both LucasArts and Telltale. Players who have ever gone on a hunt for a “rudimentary lathe” or had a conversation with Chuck the Plant will find their nostalgia meter going off the charts.

Once again changing the methods of input for their games, Telltale offers two control schemes for players (in the PC version, at least). Guybrush can be moved through the environments either with cursor keys or solely with the mouse. The mouse controls work by click-and-drag and work quite well. The game can be played almost in its entirety using only the mouse, though there is one puzzle that necessitates the use of keys, something the game helpfully points out when the time arises.

On the topic of puzzles, the ones you’ll find in Tales of Monkey Island are incredibly fair. Perhaps I’ve merely been playing too many adventure games of late, but I had no trouble making the logical hops, skips and jumps to discerning what the purpose of an item would be once I ran into its counterpart. The only points at which I ever had an issue solving a puzzle were times when I was either impatient or inobservant, leading to a couple of exclamations of, “it was so simple!”

All of these mental gymnastics are fun and/or funny, though there is one which stuck in my craw a little bit. While maps are an indisputable part of a piratey existence, having to trek through the jungle with step-by-step instructions from one is only entertaining for so long. By the third and lengthiest of these journeys, I had had about enough and was ready to move on. But that’s just three puzzles out of many and even that is little more than a nitpicking complaint.

One other, incredibly minor gripe is with the dialogue options. At several points in the game, you will be presented with several dialogue choices for Guybrush to utter that amount to essentially the same thing. Instead of actually speaking the line you choose, Guybrush makes a more generalized statement which encompasses all options. The jokes are still there in the text, of course, but it’s a tiny bit disappointing that you don’t get to hear Guybrush’s voice speak them anywhere but in your mind.

For a long-time Monkey Island fan, ‘Launch of the Screaming Narwhal’ will scratch the itch to return to the Carribbean and scratch it good. The flaws are negligible at worst and the humor really shines. It is a worthy successor to one of the finest adventure series ever to sail the seven seas. Here is to hoping Telltale can keep the Jolly Roger flying as high as it does here throughout the full length of the Tales season.

Total Score:  9 — Superb (9s are a hallmark of excellence. There may be flaws, but they are negligible and won’t cause massive damage to what is a supreme title.)