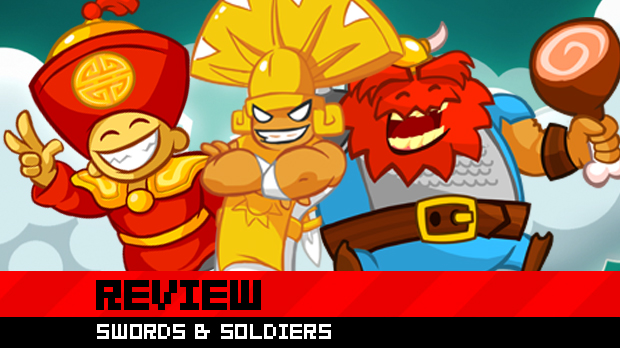 I’ve noticed a trend with the Playstation Network. Sony brings a lot of special titles to it. PixelJunk Eden, Flow, and Flower are all examples of great pieces of software I’ve had the pleasure of experiencing. Swords and Soldiers isn’t a Playstation Network original, having come to WiiWare first, but it’s still something special, clever, and cute that you can now experience if you own a PS3. You can even experience it in 3D! 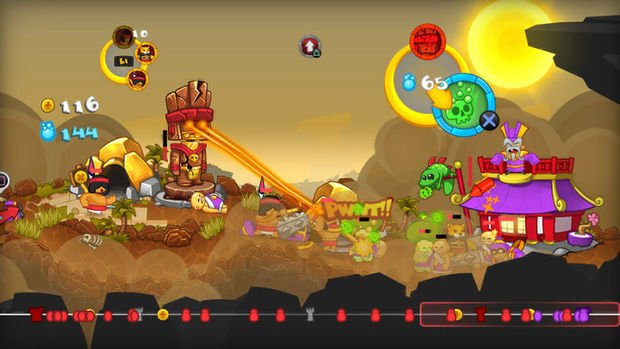 My experience with real-time strategy titles consists mostly of Starcraft and Starcraft II.  My experience with castle defense games consists of those flash games you can play in your browser.  Imagine a game where elements from both were mixed together in a blender and somehow you got a delicious peanut butter and jelly sandwich.  That’s what Swords and Soldiers is… a delicious peanut butter and jelly sandwich that you got from a blender.

This RTS / castle defense mash-up is presented as a sidescroller. Enemies are coming at you from the right, and you have to create enemies on the left that will march toward them and then kill them.  Your final goal, the thing you have to destroy, resides on the right hand of the screen.  To do this, you’ll need gold diggers, portrayed at times as well endowed women who say “I love gold,” soldiers, and magic.  All of these elements are mapped out on the L1, R1, and triangle buttons.  You press L1 for troops, R1 for magic, and triangle for upgrades.  You can select them with the thumbstick and then press the X button to activate them.  My explanation doesn’t do it justice.  The commands are simply executed with ease.

That’s no small task either.  Taking all the elements of an RTS and somehow fitting it onto only a few buttons is impressive.  You’ll be building troops and tearing down castles as though it was second nature, but what’s your motivation behind this destruction? 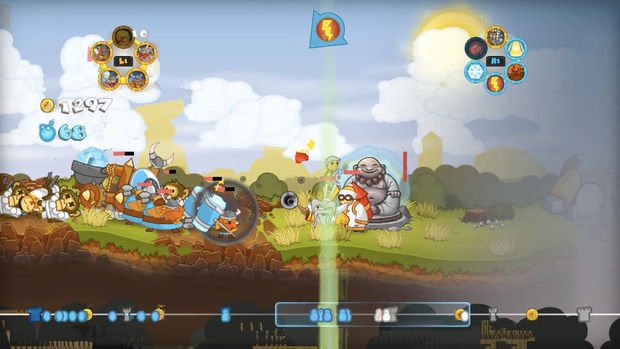 Well, you’re on a quest to make the best BBQ recipe on the planet. To make it, you’re going to need the best ingredients so you should obviously kill some people to get them.  You then embark on your quest and thus begins the Viking portion of the campaign. There’s three sections of the campaign, each with ten missions which are unlocked as you progress. You start as the Vikings, then move onto the Aztecs, before finally taking on the Chinese quest. The cleverness seen in the Vikings quest seemed lost on the Aztec portion, but the Chinese leader looking for toys with his pet dragon-snake makes up for it. 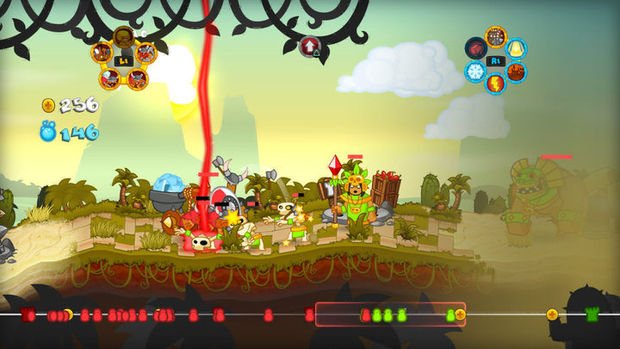 I just wish they had added some voice acting for the characters. Something similar to Chibiterasu’s voice in Okami would have worked, but instead we just get text that you press X to go through. When beginning each mission they do a Batman-esque introduction zoom to throw you into the action which I loved. Again, one of those little touches that make the game great. There’s also different music tracks for each of the levels that will play in the background, but you’ll be too busy focusing on the action to appreciate it.

Utter mayhem will be taking place on the screen at all times.  If you felt that the game was easy during the Viking campaign, you’ll quickly reconsider your stance once you start with the Aztec’s.  Some missions can take less than a minute, while others can last close to forty.  When you get stuck, it isn’t the game’s fault.  Rather, it’s usually a tactic you’ve failed to utilize, meaning you’ll need to adjust and come at the problem from a different angle.  If you don’t use all the powers at your disposal, you can expect to be stuck for awhile.

Once you complete the campaign, plenty of other options become available to you.  These include Survival where you survive as long as possible, Berserker Run, where you see how many yards your character can get before dying, and Boulder, where you squash all opposing forces with a giant rock.  Each unique challenge is actually a lot of fun and will have you adjusting tactics to figure out the best way to attack a problem.

Theres also Skirmish for those who like to jump right into the action. Here you can take on an A.I. opponent of your choosing and select from a variety of different map types. However, the most disappointing aspect of this title is multiplayer, but I don’t think thats the developer’s fault. 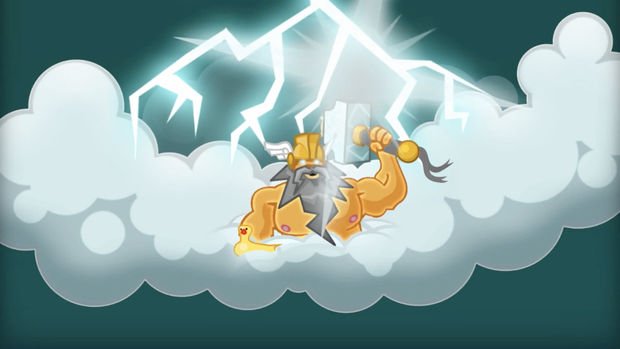 The only reason multiplayer is disappointing is because no one is playing this game. I tried on multiple occasions and I only found a game once after it sat for a very long time searching. Luckily, they also offer local multiplayer if you have a 2nd controller and want to play a friend split-screen.

With all the extra options available, this is a great title for RTS fans, and castle defense fans as well. It has style, substance, and it had me smiling as soon as I turned it on.