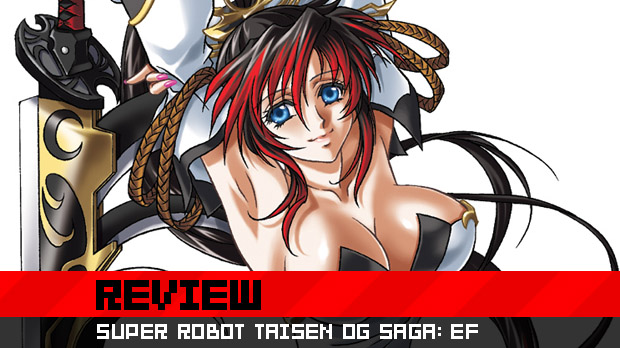 I’m guessing there are two types of people will seek out this long-named DS game. The first are the Super Robot Wars fans that follow Banpresto’s strategy role-playing titles, some of which need to be imported from Japan to be played. The rest? Well, they probably read our preview of Super Robot Taisen OG Saga: Endless Frontier, which isn’t a strategy game at all, actually.

It’s this second group that won’t care that the game is a departure from the game play formula that Super Robot Wars games have established. They’ve probably come for the 2D RPG action. Or the immersive battle system. Or the cool-looking robots. Or the boobs.

No matter, though, as all who come will find a very enjoyable romp through pervy, high-tech worlds where the people are all perky, scantily-clad smartasses that like to get into a fight. What better setting for a portable role-playing game?

Welcome to the space fantasy wild west, where tumbleweeds blow past abandoned spaceships, and large-chested catwomen hang out with sharp-tounged cowboys. The people of this universe all love to insult each other, and they all have revolvers and rifles. Because of this, lots of fights go down. It’s not a universe that’s supposed to make sense, so stop trying to figure it out and just enjoy it.

The people of this universe are just as confused as you are. Things got pretty confusing with the discovery of numerous Cross Gates, or portals to other places and other times. As you’d imagine, wars broke out over the discovery. These days, beings from different worlds and eras co-exist in peace, in what they all call the Endlesss Frontier. Peace reigned in the Endless Frontier for awhile, until a battleship from another world came crashing down, changing history forever. Cowboy/ladies man Haken and his busty android buddy Aschen set out to explore this ship. This kicks off the Endless Frontier story.

Super Robot Taisen OG Saga: Endless Frontier is the work of both Banpresto and Monolith Soft, the latter being the folks behind the Xenosaga series. This is not the strategy RPG that series fans would expect, though. The teams opted to do the turn-based role-playing thing for this spin-off, and this turns out to be the main draw of the title. Well, that and the boobs.

Haken and Aschen begin exploring this mysterious ship, a ship that the pair were supposedly found in some twenty years back. You’ll play the game for about a minute before you encounter your first enemy and get your first chance to try out SRTOGS:EF‘s addictive battle system.

Random encounters bring players to a screen that looks like your standard turn-based RPG battle, but you’ll find it’s pretty different after hitting the A button just once. When one of your party members is ready to attack, the game waits for player input. Hitting the A button will initiate a pre-determined attack from a list of five that you’ve chosen. You’ll watch on as the attack is performed on the enemy, one-on-one. Pressing the A button again at any time will begin the next attack in your pre-determined list. You’ll continue through your attack list until your character’s COM energy is exhausted or you reach five attacks.

What makes this fun is that you’re working to juggle the enemy in the air, trying your best to get as many consecutive hits as you can. For example, Haken’s first attack will launch an enemy in the air. If you press the A button again before the character hits the ground, the hits will continue into the second move, and so on until the COM meter is empty. If the enemy is not dead, and another character is ready to be controlled, hit Right on the d-pad to tag them in. Careful timing lets them continue the string of attacks. This can be done with your whole party if situations are right. This juggling mechanic forces you to keep a close eye on the enemy and their position. Poor timing lets them defend, breaking up your action. In all, it makes for a much more entertaining battle system than the plain old attack/defend system.

The Frontier Gauge, which is filled as you successfully land attacks, makes these battles even more interesting. Aside from the standard moves, each character has at least one special Overdrive attack that can be used once the Frontier Gauge is full. The party shares this meter, and it is emptied once an Overdrive attack is executed. All of the normal moves are pretty over-the-top and fun to watch, but the Overdrives are full-on spectacles, with explosions, hilarious animations, and more often than not, exposure of some skin.

Combining the regular attacks and the Overdrive ones lets you have a field day with consecutive hits. The game actually keeps track of your total hit point damage and consecutive hit counts, encouraging you to get those numbers as high as possible. Planning out an attack phase for maximum hits becomes a game within itself. The tail end of boss battles are always a thrill, as you’ll have plenty in your Frontier Gauge to keep them afloat until they die. Hit point damage counts in the 50,000 range are not uncommon in this game.

The cast of Endless Frontier happens to be just as fun as the battle system. As RPG standards dictate, your party will slowly grow as you adventure. A bubbly, busty, but barely-legal princess joins your cast next. And a relatively flat chested one follows, though she has a pet robot to make up for her smaller cup size. Crossover characters like KOS-MOS from the Xenosaga series and Reiji and Xiaomu from Namco X Capcom join in later. Each of these characters are brought alive by superb dialogue. We’ll credit the localization team for managing to make a cross-world, universe-sized game lively and interesting throughout. With a cast this big, that probably wasn’t the easiest task.

What‘s going on here is that your map icon looks squatty.

Outside the great battle system and writing, you’re getting a pretty standard role-playing game with SRTOGS:EF. It’s 2D, and involves running around in dungeons via overhead maps until a random encounter happens. You’ll fight, heal up, explore more, and then repeat the process until you find the boss. Then you’ll move onto the next dungeon.  You have your standard puzzle solving in these dungeons. In town, you’ll save, heal up, and buy items from the scratch you’ve earned in battles. Nothing here is new other than the strange setting, and even the story sometimes struggles to make sense. Luckily, the fighting action is so good that you probably won’t care when the story seems to sag a bit. That, and seeing what new busty babe you’ll come across next keeps you going.

This review wouldn’t be complete without mention of its…artistic direction. As you’ve probably already heard, the cast of this game is mostly female, with the majority of them being well-endowed. The main cast has the bulk of the bust, though it jiggles down to the rest of the non-player characters as well. You’ll get an eyeful when you manage to pull off the ladies’ Overdrive attacks; you’ll see hand drawn animations of these ladies showing off both their attack power and their skin. Simply put, someone that really likes breasts had a hand(ful) in this game, and their influence can be seen in every facet of the title. Shop keepers are busty. Enemies are busty. Even the robots are busty. The game’s dialogue is peppered with boob jokes, which the writers seem to have had fun with. Surprisingly, they keep ’em coming, too. If the breast focus seems silly or juvenile to you, then you should definitely avoid this game. For the rest, know that they keep it lighthearted and fun — it never moves into the creepy perverted zone.

Super Robot Taisen OG Saga: Endless Frontier is a very interesting mix. You won’t find a groundbreaking story here, but you will find both classic role-playing influences and new battle system ideas, all adorned with ridiculous female busts and robots and revolvers. The mix really works, with the end result being a lively and engaging role-playing title that’s not afraid to unbutton the top few buttons and relax. Let it all hang out, so to speak.