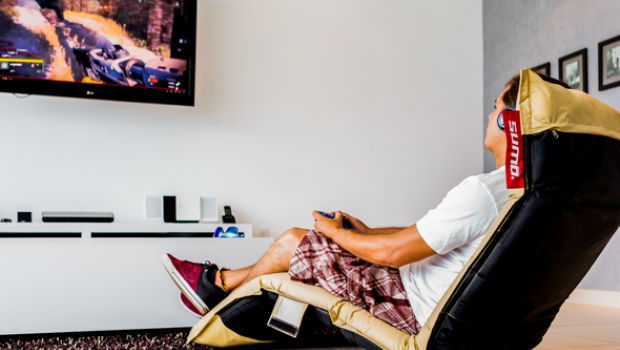 Sumo products always tend to run on the pricey side, but they’re perfect for people who have lots of room in their house, as they tend to hold up over time. No really, the bean bags are huge, and some people even have trouble moving them one room away.

That’s why I wanted to check out the Omni Reloaded — a flexible chair that could easily be transported from one gaming session to the next. I found that it’s worthwhile, but still kind of pricey.

The Omni Reloaded isn’t a bean bag — instead, it’s a polyurethane chair/backrest. It takes up a lot less room than Sumo’s normal products, as you can scrunch it up and store it upright in a closet, or with the included travel bag. “Scrunching” as I call it is the name of the game, as you can pretty much contort this thing into any form you want.

As a general rule the backrest position is probably going to be the most common, but you can also round out the end near your feet to have them dangle off a bit. Another neat use is putting it completely flat, so you can lay down either on your back or stomach and play with a portable device. At roughly six feet and three inches in length, it should fully support most people comfortably. I also never felt like I was “breaking” the chair by forcing it into different positions.

I used it during multiple short sessions and a few lengthy ones (about eight hours), and I was comfortable the entire time. If I ever felt a cramp coming on or wasn’t happy, I just changed the contortion of the chair and kept gaming. Funnily enough you can also engage what I call “nap mode,” where you put the head section down a bit while you’re watching TV.

If you tend to move a lot or live in an apartment, it’s great as you can adapt to pretty much any situation. Often times I run into people who are selling off or giving away their giant bean bags because of space requirements, but the Omni will never cause a hassle.

There really is no downside to the Omni Reloaded other than its price. You get what you would expect out of it: a versatile furniture option that can be used while gaming, reading, sleeping, or any number of uses. At the present time I’m storing it, to be used during lengthy review sessions, or when someone comes over and we need another seat. Because of its compact nature, it’ll never get in the way.