When I watch TV, play games or do anything that involves sitting down, I can never get comfortable.  Perhaps it’s the shark blood running in my veins, or the fact that I drink 5000 fluid ounces of tea before noon. Whatever the reason, my body can’t stand being still for more than a few minutes and I will shift an endless amount of times in a vain attempt at trying to get comfy. My name is Hamza Aziz, and I have a problem.

Well, I had a problem: By sheer luck I think I finally found a solution: the Sumo Gigantor Giant Bean Bag. Of course you expect a bean bag to be comfortable, but the Gigantor is more than just that. Really, it feels like you’re on a cloud, except it’s red, like bloody murder.  The gallery speaks volumes.

Read on past the jump to see why this is the greatest thing in the universe, ever, as is having a job where I’m tasked to vegetate on this thing for hours and write about it.  Jealous yet? Read on. 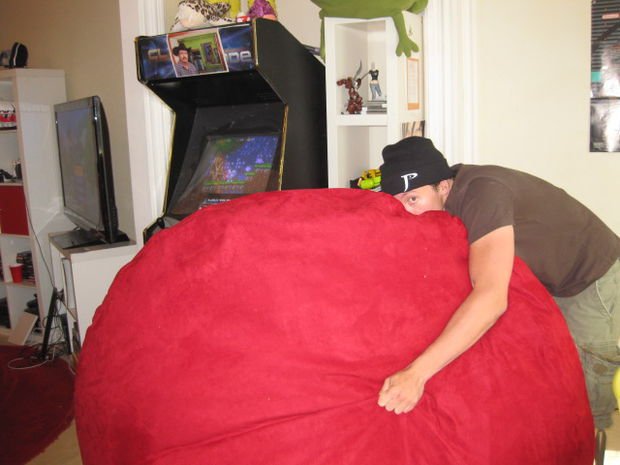 The Gigantor is a real beast. It comes in at 84L x 60W x 40H and is filled with polyester fiber that keeps the bean bag round. There are four micro-suede covers available (black, tan, brown and red) and the material feels extremely nice to the touch. It comes shipped in a compressed cardboard box about the size of a coffin and weighs just about as much as crate of baby puppies.

Its easy to get the box through doors but once it’s open prepare for a logistical challenge. You’ll find yourself turning it on the side and rolling it any way you can through corners, which can pick up some dirt quickly. Think about where you want it before you open that box or get ready to pick a fight with it. If you don’t have much stuff in the house, than the Gigantor would be great.

The huge size does command a serious tax on your living accommodations. This is not a chair: it is a small sofa alternative and/or replacement. It requires about the diameter of a fully occupied four person dining room table and is ideal for two people, whereas a similar sized piece of traditional furniture might seat two or three. If you already have a ton of stuff in your living space, than the Gigantor may not be the best choice. Unless your stuff is lame, then it’s a good time to toss it! 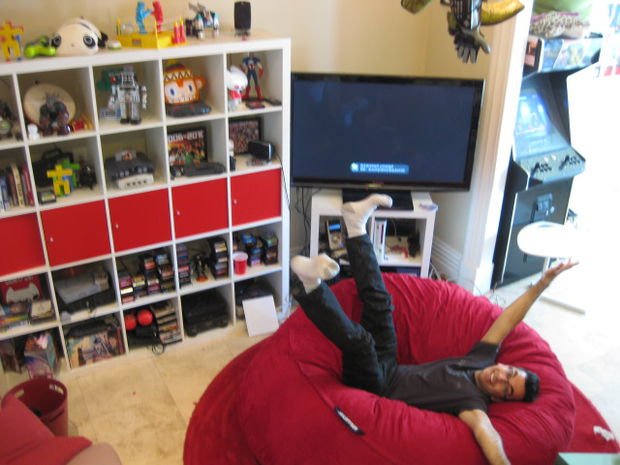 Somehow the chair is so vast that it can work well for coupling or non-romantic “Bro” sharing without any awkwardness. It is so huge that two people can sit on it comfortably without contact, and jump on and off the chair without catapulting the other person across the room.

Where the Gigantor really excels is the fun factor. You can sit on this thing at any angle, upside down, legs everywhere, and it is still comfortable. You can jump on it from a great distance and it will absorb you while barely moving, true to its Sumo moniker.

Another notable thing is how well it manages to breathe and not increase your body temperature. We have vinyl and leatherette bean bags which tend to get warm and sticky (ew) fast after a few hours on them, and that doesn’t happen on the Sumo.

Last but not least, GIRLS DIG IT, YA HEARD? 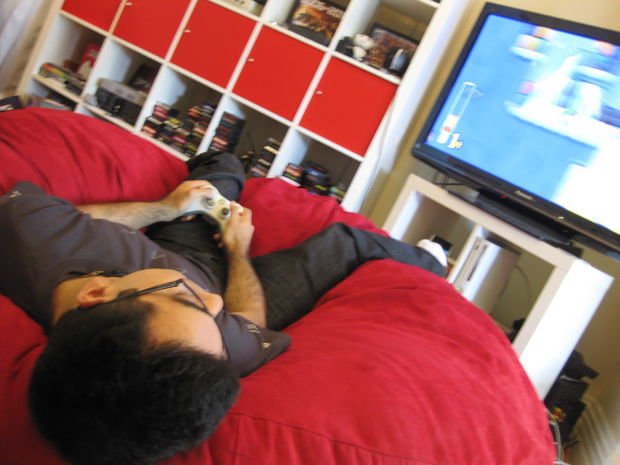 My first test with the bag saw me playing Perfect Dark for Xbox Live Arcade: a game that uses a traditional control scheme, arms relaxed on my lap. I laid down on my left side while playing and after about an hour, I came out of my gaming haze to realize that I did not shift my body around once — Only my fingers and eyes were moving. The Gigantor is so vast that it sucks you into whatever position you plopped into it. I was so snug that I never wanted to move — it’s Jabba The Hut style blobbyness brings about a whole other level of comfort and laziness you simply won’t experience on even the most plush sofas and equivalent La-Z-Boy seats.

The real test with the bean bag came when I tried out some Wii games. I played Super Mario Galaxy 2 and No More Heroes while lying on my side and sitting on it like a regular chair. I had no problem playing these games and I barely felt the bean bag shift as I was waving my arms all over the place. Playing on your side isn’t ideal when the games require you to point at the screen, obviously. 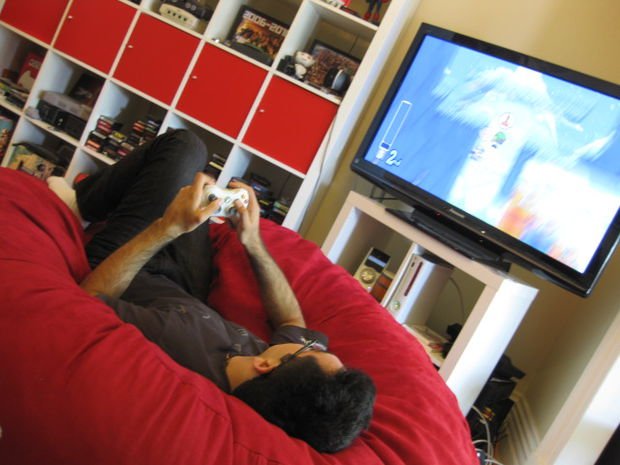 Back and Lumbar support

As expected, a bean bag can only support so much of your back. I want to note that before this first test, I was experiencing some back pains. Most of the pressure on my back went away though after being on the bag for this first test. I still had some minor pains after the fact, but it’s a little relieving to know that I have something in my house now that can help out when future aches arise.

The porous cover is somewhat of a dirt magnet though, which becomes really noticeable when you’re rolling it around like a Katamari ball. Luckily, it has zippers so it’s pretty easy to clean the cover and it is machine washable.  A trip to the coin laundromat should do the trick, similar to a giant comforter. 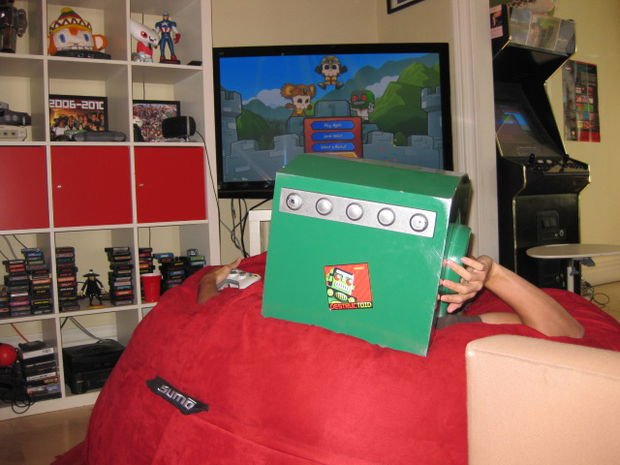 Size is really the only issue when it comes to the Gigantor. If you’re looking for new furniture or have lots of space, then getting something like this bean bag is a no brainer. If you are tight on space though, the biggest Sumo Lounge chair isn’t the greatest idea unless you’re willing to toss out some of your old chairs to make the room.

The Sumo Lounge Gigantor bean bag chair goes for $399 and shipping is free. That does sound like a lot, but it is at least $100 cheaper than some of the other bean bag brands out there. If you have the space, the Gigantor is well worth the purchase: you get the quality that you pay for.

It’s really a question of whether or not you want to add some flavor to your quarters. Just like an entertainment object in The Sims, adding a Gigantor adds +9 fun to any room its in. Your guests will immediately want to check it out, as you simply cannot beat how inviting this to a curious posterior.

If you’ve got the money, you need this thing!

Sumo sent these things to Destructoid HQ for evaluation. El Jefe said we could give them away to readers if we didn’t like them, but that’s definitely not happening. Sorry guys! That said, next time you’re in San Francisco feel free to stop by our office and dive bomb yourself into it face first.

We are also in the process of evaluating Sumo’s Sway Single corduroy bean bag and will have a review for that coming up.

Filed under... #Accessories#Cooler than the other side of the pillow