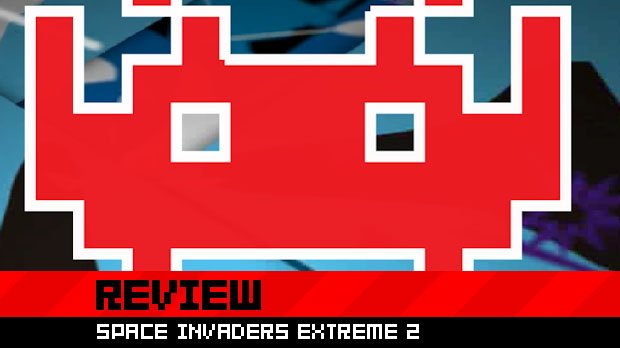 Space Invaders Extreme is regarded by many as among the greatest DS games of all time, and an essential component of any portable gaming repertoire. It was undoubtedly a brilliant game, and so a followup was assured.

That followup is here, with brand new features, new gameplay additions and, most importantly, a whole new range of kick-ass music. New doesn’t always mean good, however, so the question is this: Does Space Invaders Extreme 2 manage to live up to the prestige of the original, or is this invasion an unwelcome one?

Read on as we review Space Invaders Extreme 2.

If you’re a fan of the original game, then you’ll feel right at home with Extreme 2. The core gameplay remains the same — shoot down incoming invaders with your cannon, rack up points and attack enemies in specific orders to obtain bonuses and weapon upgrades. As ever, your actions in the game contribute to the background music, while the insane score multipliers and trippy graphics make for an incredibly exciting and aesthetically pleasing experience.

Everything you loved about Space Invaders Extreme is present in this sequel, and I in fact found that the aesthetic qualities are even better this time around, with incredibly catchy music and some amazing visual effects going on in the background. Despite the new modes and features, the game doesn’t seem quite as lengthy as the original (in fact, you’ll be done with Score Attack in less than half an hour), but of course, this is a game designed around repeated play, so the length may not matter to most fans.

What will matter is the new features. In keeping with the spirit of the original, Space Invaders Extreme 2 is all about racking up scores and bonuses. Shooting Invaders of a similar color type, an action known as a Round Feature, will reward the player with weapon upgrades. These upgrades are taken from the original game, including the Wide Shot, Laser Beam, Bomb and Shield.

Completing Round Features will cause a flashing UFO to fly across the screen. If you shoot this UFO, you active a Round. In a Round, the top screen will become part of the battlefield, and players will have to shoot all the Invaders round within. Doing so activates Fever, in which huge bonus scores can be achieved and vast quantities of UFOs fly around the top screen.

Players can keep the momentum going and attempt a Super Fever Mode, which is like Fever, but much more super. Upon completion of a Fever mode, a Bingo Panel will light up. If a player can get the Bingo screen to light three panels horizontally, vertically or diagonally, Super Fever Time will activate.

The inner workings of Extreme 2 and its many objectives and modes sound complex, but the inherent beauty of the game is that it can be played without any attention paid to the bells and whistles. Simply playing the game to the best of one’s ability will often see these modes activate anyway, while players obsessed with beating their high scores can opt to constantly go for Super Fever. Veteran players should enjoy the extra level of play, while those who don’t care will just enjoy the awesomely pretty colors.

Joining the traditional Score Attack mode is a Time Attack mode. These are the same levels as found in Score Attack, but instead of racking up points, players will be racing against a clock. In addition, there is a versus mode in which opponents simply play their own game of Space Invaders in tandem, with the loser being the first to get Game Over. Shooting three Invaders in Versus allows the player to store and send attacking Invaders to the opponent’s screens. It’s rather simple, but those looking for some variety will welcome the extra mode. Unfortunately, my attempts to get into an online game failed, because DS games are horrible for online play.

If you loved the original Space Invaders Extreme, you’d do well to pick this up. The new features aren’t exactly mindblowing, but the very fact that it’s more of the game you love is plenty justification for its existence. Despite the short length of the main mode, it’s a nevertheless addictive experience that will demand repeated plays from fans looking to get the highest scores possible. It looks amazing, more amazing than the last game, and the shooting, score-racking action is as rewarding and satisfying as ever. I’d have liked more modes and a little more oomph for a sequel, but it’s a small complaint in an otherwise great game.

Definitely pick this up if you liked the original. It will likely stay in your DS for quite some time.