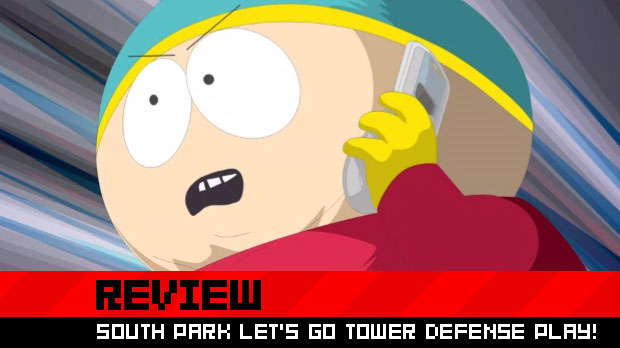 A South Park game has been “in the works” since E3 2008. I use the term with implied skepticism because I’m not convinced anybody — even the developers — knew what the game was actually going to be until very recently. I get the distinct impression that South Park on XBLA was just a concept until late this year, and playing South Park Let’s Go Tower Defense Play! has not convinced me that this thing has been in development for a very long time.

The Tower Defense genre is quickly becoming one of the most overplayed genres of recent times, and Let’s Go Tower Defense Play! only adds to the saturation, bringing nothing overly compelling to the party. So, is this new South Park game worth your time and money, or are there better, infinitely more worthy Tower Defense games out there?

I think you can already guess the answer, but feel free to read our review anyway.

I’m something of a South Park fan, so let me get this important detail out of the way first: This game isn’t funny. In fact, it’s despicably lazy in its attempts at humor, choosing instead to recycle old quotes from the show itself and awkwardly hammer them into the context of the game. Hearing Cartman randomly talk about how poor Kenny is just isn’t funny on its own, and I think we’re all comfortably over the “Shitty Wok” joke.

This is a trapping that many games based on TV shows fall into, and one I’d hoped Let’s Go would avoid. Sadly, my hopes were dashed the moment I heard Cartman say, “Whatever, whatever, I do what I want.” These quotes were amusing in the show when they were first heard. They sound incredibly lame and canned when regurgitated in the game.

The only really funny thing about this title is Trey Parker’s Japanese announcer voice who narrates every stage and keeps players informed of their progress. Even that, however, begins to grate long before the game is over, and what you’re left with is just another licensed game, trying to recreate the magic of the property it’s based upon by hammering home the same jokes we’ve heard before. Truly a waste.

What’s worse is that the game itself isn’t really very good either. If you’ve played a Tower Defense game before, you’ll know the meat and potatoes of the gameplay. Waves of enemies pour from one part of the screen in an attempt to reach a goal, and your job is to build and upgrade a variety of weapons in order to stop them. The South Park kids can create baseball pitchers, fireworks, lazers and more to stop waves of Ginger Kids, Crab People, Demons, Hippies and more.

Let’s Go is slightly more hands-on than other Tower Defense games, as players can take control of the characters and manually lob snowballs at enemies. The game allows for up to four players, either locally or via Xbox Live, but single-player mode lets you switch between the four characters. While having direct control is interesting, it invariably turns the game into a finger-withering button-masher as players rush around the map, throwing things at the incoming waves. It’s also very annoying to play the game solo, manually scrolling between characters.

Each character also has access to a unique special ability when their special meter is filled. For instance, Kenny can generate vast sums of cash to build and upgrade more towers, while Butters can create a tap-dancing whirlwind that destroys enemies upon contact. The special powers are welcome and add a touch of variety to the game. It’s just a shame that they take forever to regenerate.

The powers are damn near essential too, as this game can be infuriatingly overwhelming at times. What’s more, the later stages often fail to give one a clear indication of how enemies will be traveling across the screens, meaning you can end up building towers and walls in the wrong part of the screen, which could screw an entire stage up. Fortunately, the game is quite forgiving in that it allows you to skip a stage if you fail. Theoretically, you can skip your way through the entire game to see the ending. Not that I tried out such an unscrupulous theory of course. I did.

To the game’s credit, there are quite a few extras. Outside of unlockable characters, there are challenge maps that cen be discovered, and a number of videos from the South Park TV show that are used as incentives for completing various objectives. There is a good deal of content for those willing to put the time and effort in, but if your tolerance for smashing a button and listening to the same unfunny soundbites is low, you won’t want to put the hours in.

Ultimately, South Park Let’s Go Tower Defense Play! is a disappointment. It’s not exactly a bad game — the Tower Defense gameplay is competent enough — but it fails to do anything that makes it worth being considered anything more than simply “alright.” There are ultimately far more charming and addictive Tower Defense games out there for your money, ones that are guaranteed to entertain more than this one does.

It’s an okay game that’s worth buying for only the hardcore South Park fans, and even they would have to evaluate if hearing recycled show quotes is worth the money.