Who would have thought, back in the mid-nineties, that we would one day be able to play Sonic the Hedgehog 2 on our telephones? How absurd! We take things like the iPhone for granted now, but back when Sonic 2 was released, the closest we could get to taking Sega on the road was the Game Gear, and we all know how wonderful that was.

Fast forward over ten years, and we have Sonic 2 for the iPhone and iPod Touch. Hardly surprising anymore, since the Sonic franchise, and a great many other Genesis games, have been whored out continually and shoved onto every format imaginable. Which begs the question — is Sonic 2 worth the premium price tag?

We’ve been playing with the latest port, getting to grips with the touchscreen controls, and working out if a fast-paced platformer can actually work on the iPhone. Read on as we review Sonic 2 … as if it’s 1992 or something. 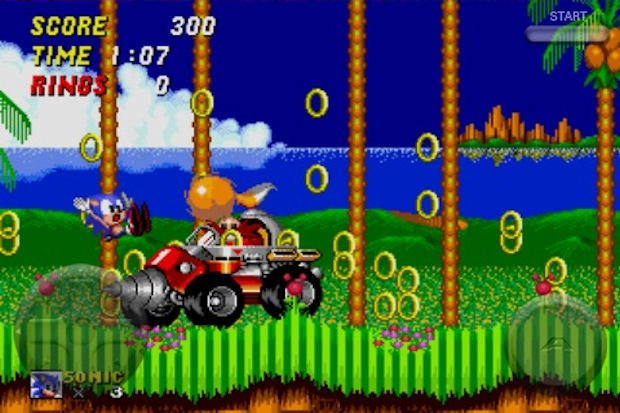 What can we really say about Sonic 2? It’s Sonic 2! You already know whether you like this game or not. Fundamentally, this is the exact same Sonic 2 you’ve played for almost fifteen years. It’s my personal favorite in the series, and the introduction of the Spin Dash, the terrific level design, and the excellent music makes this one of the best platform games ever made. Not to mention, it’s a title I play endlessly, regardless of which format it’s on.

Much of that is preserved with the iPhone edition, although fans of the multiplayer will be sad to note that it has been cut. Since the multiplayer never had many fans to start with, it’s no big loss, but it’s strange how Sega never seems to throw in a token online mode for the old versus stages. It really wouldn’t be too hard and may actually make one of these old Genesis ports feel somewhat justified.

The controls are a huge consideration with any iPhone experience, and while I can tell you that the touch screen interface works well enough, it is not a substitute for a D-pad in the slightest. The imprecise controls and tendency to press the wrong part of the screen makes Sonic very difficult to control on some of the trickier platforming sections, and a few bosses have become much more difficult thanks to the dodgy input method. The controls are functional and responsive enough, but they could only qualified as functional at best and remain glaringly inferior to a real controller. 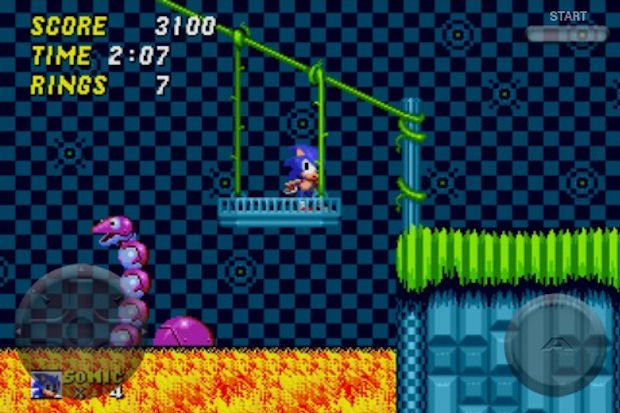 As far as the quality of the port itself goes, Sonic 2 on the iPhone fails to meet standards, it pains me to say. Sega notoriously ports its games without any changes at all, leaving age-old glitches completely intact. However, Sonic 2‘s iPhone iteration seems to be even more buggy than the original game, with Sonic clipping through platforms even more frequently. I have never fallen through the floor in Aquatic Ruin Zone in my life until the iPhone version, where it happened on more than one occasion.

The music also seems to lag out, skipping briefly at various points. While it’s infrequent and doesn’t impact the game very much, it’s very noticeable when it happens, especially to fans of the game’s excellent soundtrack.

Sonic the Hedgehog 2 is a functional, playable port, but it’s clearly the worst version of Sonic 2 to have been released. With a less suitable control scheme, a higher rate of glitching, and the missing multiplayer mode, you’re getting less bang for your buck than ever before. Even worse is the fact that Sega still insists on charging upwards of five dollars for these old games that are widely available for far less elsewhere. At a dollar, Sonic 2 might be worth owning just to have it conveniently stored on your iPhone or iPod for a rainy day. For anything more, however, this relatively slapdash port cannot really be recommended. 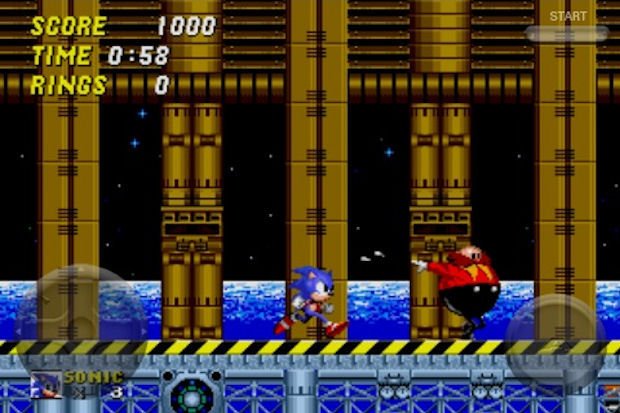 At best, it’s an alright game, but everything good about it was good in 1992. The iPhone itself has added nothing, and you could get five better games on iTunes for the cost of one mediocre Genesis port.