I still remember playing through Sonic Adventure back when it came out on the Dreamcast. Firing it up again on the 360 re-introduced me to some characters, like Big the Cat and Amy, who I had all but forgotten about. But have my memories betrayed me? Were Sonic’s eyes too green on the Dreamcast? Were his legs too long? Are my jokes too old? I’d better write a multi-paragraphed review so people can read it and find out. 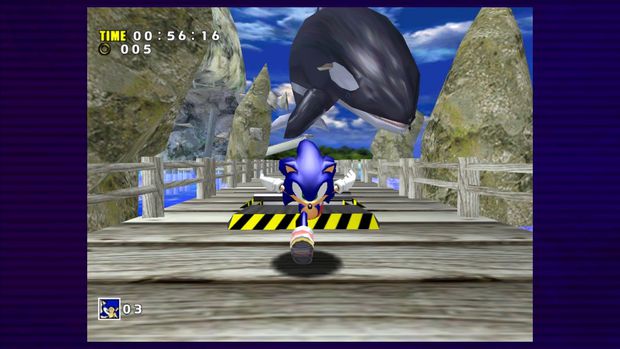 The story is crap. Yep. That’s how we’re starting this. It’s okay though because no one plays Sonic games for a deep, compelling story. Just be aware that this story is bad. Really bad. Some of the lines spoken in the game make me wonder how much time was really spent on this script. At one point when encountering Robotnik he says “Give the chaos emeralds to me, or else I’ll take them from you by force … the hard way!” Now, think about that statement. Was there ever an easy way to take something “by force” from someone? The answer is no. Dear script writer, I know you’re writing this with 10-year-olds in mind, but could you at least try to make the characters not sound idiotic? Thank you.

The reason you’re fighting Robotnik is because he has teamed up with Chaos, who gets stronger every time he’s given a chaos emerald. So Robotnik keeps waiting until you find them before he smacks you around, takes them, and then feeds them to Chaos. I wish the people at Team Sonic would join forces with the writers of the Sonic comic. They could possibly make something enjoyable, which this, and many other Sonic video game stories, are not. Sly Cooper, Ratchet and Clank, Jax and Daxter — these are all games targeted toward the same age group. Guess what? Their stories don’t suck. I don’t care if the game’s 12-years-old.

Enough about that. The gameplay is the most important part of any Sonic game. This was the first time we got to see Sonic on a next generation console way back in 1998. It let you play the game as other characters like Knuckles and Tails if you chose to, it had free roam areas, and different stages, like a flying stage to break up the action. Back then it was amazing, some would say revolutionary. 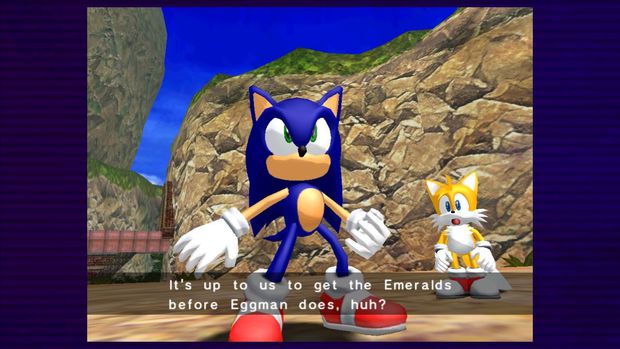 Today, it shows its age, and it has not aged well. Sure it was great in 1998, but today you can see that it has a lot of problems. The highlight of the game is the levels that have Sonic running around, collecting rings and killing badniks. The low points include the free roam areas and a fickle joystick that has you coming to a dead stop during a running segment or fly off into oblivion when going off of a jump. There was also a camera system that works sometimes, and sometimes it decides to be utterly useless.

It will clip through walls, it will show Sonic’s face running toward the screen when it should be behind him, and it will lock when you need to rotate it 45 degrees. So yes, when it works, it’s great. When it doesn’t, have fun swearing at your television.

Even with my gripes, it is still fun and a little addictive. The running portions, especially in the early levels, still hold up. Sonic’s homing attack is a quick and easy way to dispatch enemies, but sometimes he will spin around an item or bad guy without hitting it. I don’t think that’s supposed to happen. 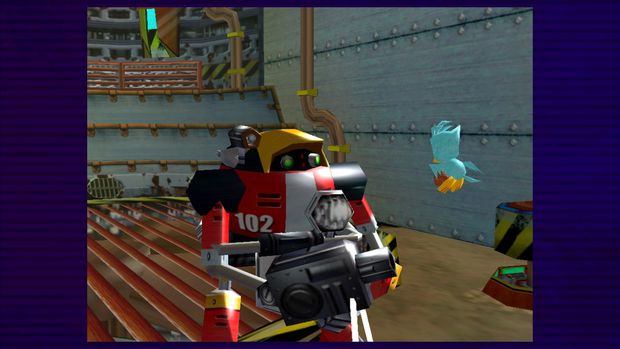 In addition to all this, you can train a little Chao character and play as other furry friends.  This allows you to experience the game from their point of view, and unlock one more bonus character if you finish the game as everyone else. There’s a lot to experience if you’re a hardcore Sonic fan.

Obviously the game is going to look dated seeing as it’s twelve years old. Nothing has been updated as you’re pretty much getting a direct port of the Dreamcast version. The game will let you upgrade to the Director’s Cut for an additional 400 Microsoft Points but it doesn’t improve the graphics.  Come on Sega. If someone’s going to spend 10 dollars on a game, couldn’t you just have given them the Director’s Cut version instead of charging them another $5 for it? At least it’s there as an option for you fanatics, but I’ll save my cash.

You’re going to see a lot of clipping, blocky characters, and occasionally Sonic and Tails will merge to become one at an end screen. I’ve tried to get that image out of my head, but I will have nightmares of that amalgamation for years. The levels still look pretty good, even with their low resolution textures. 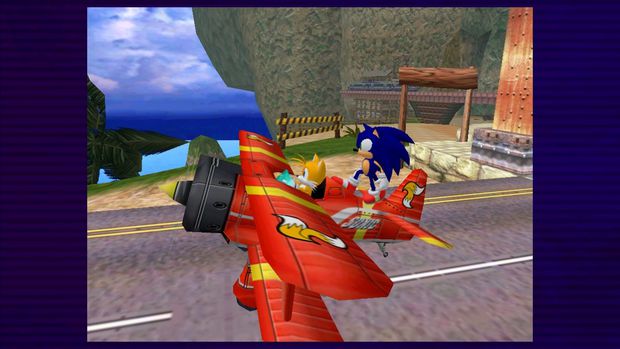 Somehow, Tails manages to be less annoying over time. Instead it seems that they put all their efforts into making Big the Cat seem like a mentally handicapped imbecile. His voice actor must have been forced to drink a mouth numbing solution before speaking his lines, because it sounds like he is chewing on his tongue.

Then there’s the music that no one should ever be forced to listen to. I’m sick of it. I want ONE Sonic game released in the next five years that doesn’t use this shitty 80’s rock crap that we’ve been forced to listen to over and over again. The soundtrack to Sonic 2 is fucking amazing. Did someone at Sega decide to lower their standards and force this wannabe 80’s easy listening, wannabe rock crap into our ears? Who’s in charge of this? Please fix it. I know you can make great music, so do it!

Oh, and then there’s the epic fight between Sonic and Knuckles where Knuckles shouts the words “oh no” when hit with an energy level that can only be duplicated by Eeyore from Winnie the Pooh. 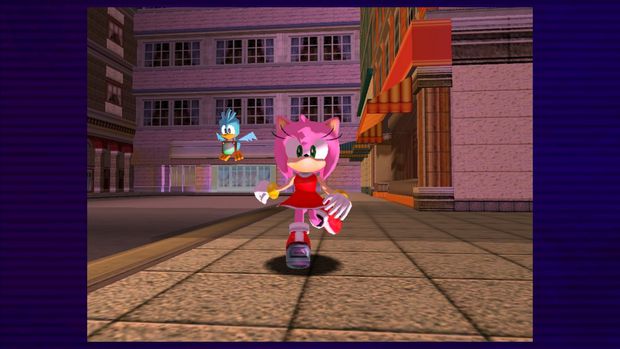 So how hard is the game? It’s not. It’s hard to prevent yourself from clipping through walls or flying into oblivion, but the game isn’t that difficult. One thing I would of liked to see is an indication, or hint, as to where you’re supposed to go in the “free roam” areas. You’re just supposed to know where to go (I guess) as theres no blip on your map, or audio hint. If there is a hint, it’s usually vague or difficult to find. You wont die much, as there’s plenty of rings and free lives laying around to keep moving the story (or what they call one) forward.

This was actually a very difficult review to write. Do I hold this game to the standards it was up against in 1998, or to today’s standards? The nostalgic part of my brain is telling me to love this game, but today it just shows too many signs of its age. Like me, fans of Sonic are going to go in with fond memories of the game. Sadly, I have to recommend that you keep those positive memories and avoid this one. It’ll just tarnish the pedestal you’ve set this game up on in your mind.

This is a great game for the fanatics who like having all their Sonic games on a next generation console. However, if you’re a casual fan looking for a masterpiece, all you’ll find is a relic that was once considered greatness.

It honestly pains me to say that.