While I enjoy the occasional racing game, I tend to prefer arcade style over strict simulation. In other words, I’m not exactly looking for excuses to go out and buy a high-end wheel that’ll suplex my bank account. Thankfully, we have Dale on staff to handle most of the sims.

Every so often, however, the odd product ends up finding its way to me, which is more or less what happened with Ignite Technologies and SteelSeries’ Simraceway S1 Steering Wheel for PC. If you’re familiar with Microsoft’s unusual-looking Wireless Speed Wheel for Xbox 360, you’ll have some notion of what this thing actually is. 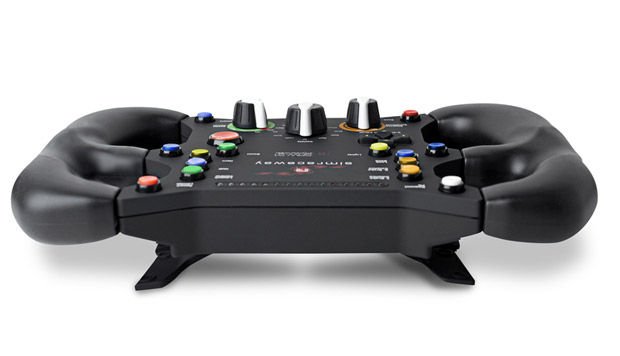 Unlike the aforementioned Microsoft wheel, the Simeraceway S1 is not wireless. Which is a shame, because the small form factor and portability of this peripheral are two of its more appealing aspects. It does, however, make use of motion for control.

To use this wheel, you hold it up in the air as if you’re driving a real car (don’t worry, it’s light!) and twist it left or right. The accelerometers do the rest. Now, if you’ve played Mario Kart Wii — especially with the Wii Wheel — you might be thinking unhappy thoughts. Rest assured, the SRW-S1 doesn’t require the type of over-the-top, exaggerated motions that cropped up in that game.

In practice, the experience is about what you’d expect from traditional steering wheels as far as turning is concerned, though there is obviously no base to support your arms and hands on. So it takes some getting used to at first. I can’t see racing die-hards using this as their controller of choice, but it’s more effective than one might think at first glance.

Indeed, the SRW-S1 is overwhelming to look at for an arcade-loving person such as myself. As the name of the wheel would indicate, it’s been designed specifically for the free-to-play Simraceway. Given the nature of this game, there needs to be a lot of buttons, and even a few dials for good measure.

Thankfully, as the guy who always has to pause a game to remember the controls, you can go without memorizing the majority of these buttons. They cover functions like changing your HUD, looking left/right/back, requesting a pit stop, and honking your horn. As for the dials, you’ve got one for customizing steering sensitivity, and two more for handling assists.

The buttons themselves feel responsive and make a satisfying click, and even the d-pad is pretty decent. A little on the squishy side, but decent nonetheless. I’m less enthusiastic about the dials — particularly the way they look — but they get the job done. 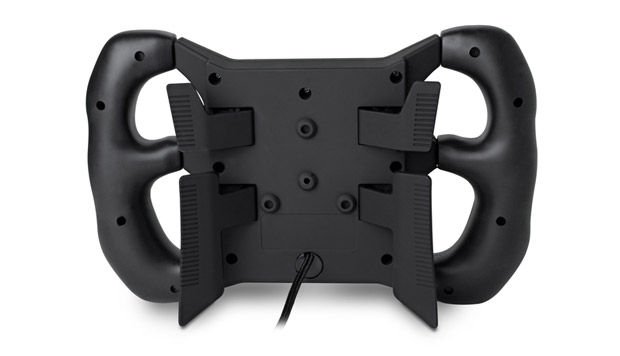 The grip, paddles, and LEDs

The SRW-S1 uses a comfortable rubberized grip. There are little grooves on both of the handles for you to rest your thumbs in that I greatly appreciate. A word of caution, though: those with small hands might have problems with the design. As a six-foot-tall dude with what I like to think are medium-to-large hands, I can barely reach the back paddles and the buttons simultaneously. This isn’t a huge problem necessarily, because you’re not likely to be constantly hitting buttons, but it’s worth bringing up.

Speaking of the paddles, they’re pretty important. The two larger ones are used for acceleration and braking, while the upper pair is responsible for up- and downshifting. The large paddles feel wonderful and offer a fair bit of resistance. The small paddles, on the other hand, require a gentle touch; as with the buttons, they produce a nice audible clicking noise.

Best of all, in my opinion, is the array of LEDs. They glow a bright blue when it’s time to shift gears, and when I say “bright,” I mean it — you can concentrate on your monitor without having to look down, they’re so intense.

As stated earlier, this device was built with Simraceway in mind. Not surprisingly, the SRW-S1 works best with it. (At least, out of the games I tested, anyway.) While it’s being claimed that basically all PC racing games are supported, the more robust the customization options are in-game, the better, and stuff like the LEDs and assist dials are less likely to be usable elsewhere.

Given that Simraceway is a free-to-play simulation racer, it’s not really my cup of tea. That said, I can totally see the appeal. Long story short, if you’re looking to get the most out of the SRW-S1, it’s worth downloading this game. It’s not like there’s a real barrier to entry.

I did also try out Need for Speed: Hot Pursuit. Customization was relatively painless, though the wheel’s buttons weren’t a great match for your police abilities. Maybe that has more to do with me being used to playing Hot Pursuit with an Xbox 360 controller. It’s entirely possible. The only other downside is that the steering wasn’t as sensitive as I would have liked — especially compared to how great it is in Simeraceway.

Lastly, I played through some TrackMania 2: Canyon. (Most of my racing games are console versions. Sorry!) Steering was improved coming from Need for Speed, and all things considered, the SRW-S1 worked decently. Again, it really comes down to how much individual titles allow you to customize their controls. 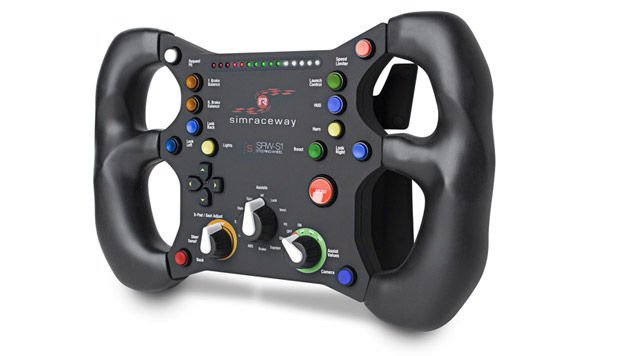 Given the $119.99 price tag for the Simraceway S1 Steering Wheel, it’s a tough call. The build quality is good, the small form factor allows for easy setup, and I really like the paddles — but the use of accelerometers and lack of force feedback could be considered deal breakers depending on your needs.

Due to the button placements of the SRW-S1, it’s best used with Simraceway. While support for other racing games seems solid, the layout simply isn’t going to be as good as it could be for everything. If you’re fairly into simulation racers on PC and don’t want or have room for a full steering wheel, this wouldn’t be a bad buy. Just don’t go in expecting the exact same results.