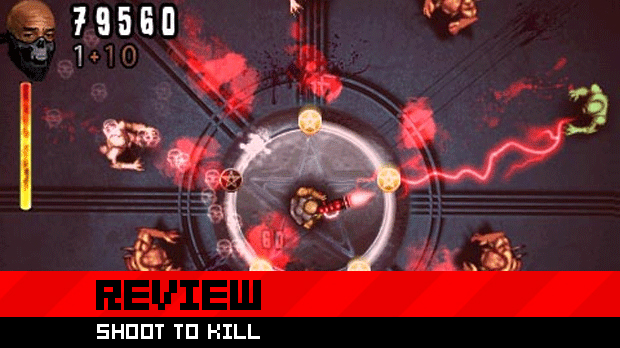 I look forward to playing iPhone shooters about as much as I look forward to my first prostate exam, because I imagine they’re quite similar. There’s an awkwardly painful use of touch immediately followed by feelings of helplessness and frustration, and you’re paying to have the experience, to boot. Whether FPS, TPS, or twin-stick, non-shmup shooters on this platform always seem to suffer from the same issues.

With a small amount of screen space to use, the controls necessary to execute the desired mechanics eat up far too much play area. I don’t need a portable game in order to watch nothing but my thumbs twiddling. On the other end of the spectrum, games that try to shrink the controls usually result in your thumbs slipping off the virtual d-pads, analog wheels, and buttons, initiating frequent rage-baiting deaths as you simply stop shooting or moving at a crucial moment.

So, when an “action shooter” for the iPhone named Shoot to Kill dropped in my lap, I didn’t exactly jump for joy. Luckily for me, when I booted up the game and assumed the position, I was in for a pleasant surprise. The game provides a really fun arcade-like experience that is very smart about recognizing the limitations of the iPhone platform in its design and controls. 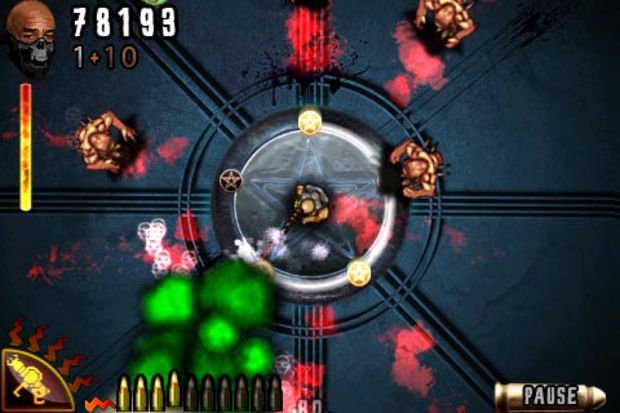 Shoot to Kill is a game about a guy who has to fight his way out of Hell. Sounds familiar, no? The influence of Doom and Diablo are all over the place; demons and pentagrams are the order of the day. While the art style isn’t horribly unique, the visuals are polished and crisp looking and the presentation overall is very pleasing.

Armed with an assault rifle and (usually) an alternate weapon, the player must fight off waves of enemies and ascend through the circles of Hell to escape death and damnation. Shoot to Kill is played from an overhead viewpoint, but eschews the twin-stick gunplay that usually comes with this camera perspective. Instead, the player is rooted at the center of the screen while enemies converge from all angles; the action instantly reminded me of the arcade cabinet classic, Tempest.

Instead of an virtual analog nub, you control your weapon by tapping the screen in the direction you want to fire; each tap is one squeeze of the trigger. The only other elements you have to interact with are the ammo meter (which you can tap to reload if you’re not already empty) and the weapon icon (holding it down wields your alt weapon). It’s a refreshingly simple and elegant control scheme that keeps your fingers on the move and mostly out of your field of view.

The arcade experience even extends to the business model for the game. The game starts you with three lives and slowly ramps up the intensity with more and varied baddies as the the levels progress. With practice, you can make it a fair way through the game in only the three lives provided, but chances are that eventually the demons will get you. The game is free, and you can start from the beginning as many times as you like.

However, those that really enjoy the game (or just suck at it) and want to try to push through the tough later levels to see the end can purchase an additional ten lives for 99 cents. It took me back to my quarter-feeding days as a youth. Honestly, I wasn’t that interested in seeing the conclusion of the game; the challenge of getting as far as I could on three lives was engaging all by itself. However, I enjoyed the game so much more than I expected that I felt really good about coughing up a buck to support the developer.

Solid presentation, an excellent control scheme, multiple game modes (story, survival, and multiplayer), achievements, and a revamped feel to a classic arcade experience all contribute to a strong iPhone offering that harnesses the strengths of the touchscreen environment. Shoot to Kill is a fun and simple game that’s a steal of a deal at free and certainly worth picking up, if only to take it out for a spin.