Ah. Psssh. Heh, this is Easy. I’m just walking, slashing, and winning. Over and over. No challenge. Too easy. Dungeon Crawler? Whatever. How ’bout Dungeon Stroller. How ’bout Roguelike with Training Wheels. Forget this sissy crap on this sissy system.

F*ck! How is that little piece of crap hitting so hard?! What is that thing anyway? Can this dungeon even be completed? How many times have I died here? I thought this was supposed to be [mocking air quote motions] “more accessible.” What a piece of… Okay, one more try. One more try and then I’m totally done. Forever. That’s it.

[another two hours later, after gathering some healing items, leveling up, and getting a better weapon set]

Yeah, BITCH! Where you at?

Hmm, this game is kinda fun.

Back when Atlus first gave me a preview of Wii game Shiren the Wanderer, they kind of tiptoed around the roguelike label. Dungeon crawler? Sure. But let’s not call it a mean name, now. That’s where they were coming from, and I totally get it. And Shiren, a port of Sega-released DS game Mysterious Dungeon: Shiren the Wanderer, was supposed to be much more accessible than your standard roguelike anyway. Now that I’ve played it, I can tell you it is definitely more accessible. Easier. More forgiving. That said, the good news here is that there’s still plenty enough of a challenge to entertain fans of the genre. There is actually an excellent balance here, making this a good pick for anyone who likes role-playing titles.

Just like in any other dungeon crawler, you’ll push through floor after floor of randomly generated dungeons, looking for loot and taking down baddies along the way. The goal here, playing as Shiren, a Wanderer (treasure hunter, explorer), is to both find your way out of the dungeon and gain enough experience to become strong enough to tackle the next dungeon. As is usually the case in this type of game, for every step or action your character takes, the enemies in the dungeon will also make one, in a turn-based fashion. You’ll take step after careful step, looking for the boss or the exit, slowly working your way up until you can take on that final dungeon. That’s exactly how Shiren the Wanderer works. 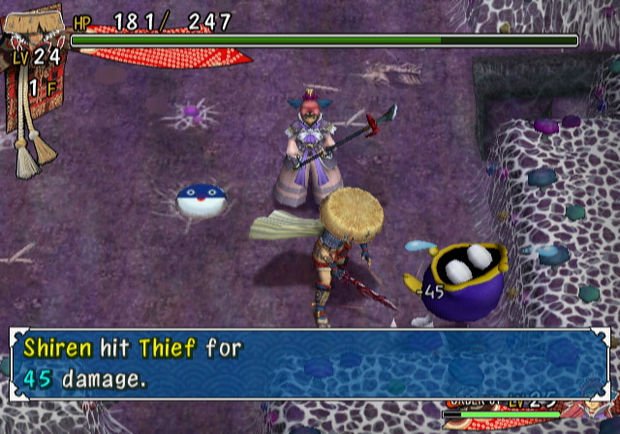 As anyone that has played this type of game can tell you, they’re notoriously unforgiving when you don’t succeed. You die and you’ll lose all of your progress, forcing you to start over from the beginning. Shiren the Wanderer is a bit more forgiving. Less of your progress is lost when you fail. On the easiest setting, you’ll keep your items and your levels when you die, meaning you’ll only have to start the dungeon over. This makes for a game that manages to be challenging without being discouraging. It is a bit too easy starting out, but the difficulty does ramp up later. If you’ve always liked the steadily increasing challenge of roguelikes but always hated starting over when you died, this title is going to be one you’ll dig.

Here’s a few other atypical bulletpoints: Shiren the Wanderer actually has a story. It’s not a brilliant story, but it’s an interesting one that keeps you going, with key cutscenes after major battles and bits of dialogue along the way. Shiren also has non-dungeon locales that can be explored on foot. Your traditional RPG town is here, where you can freely chat with NPCs to flesh out the story a bit. There’s interesting and lively characters (including a cute talking ferret), some back history, and a rich visual presentation to support all of this. Add in bright colors, good graphics and a traditional Japanese score, and you have a nice little game. It’s not all dungeon after dungeon, and that’s really refreshing. 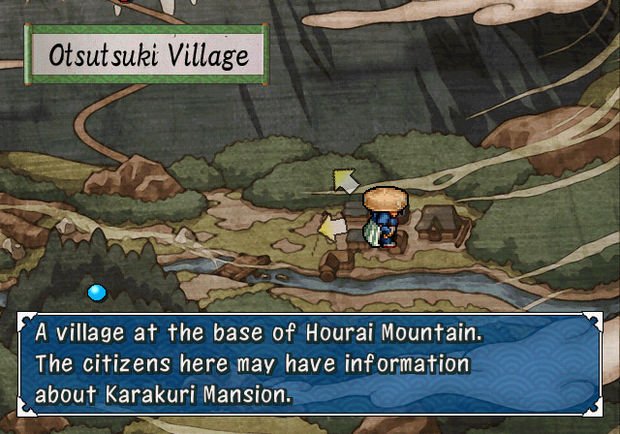 There’s a lot of changes to like here. I liked that you can control both your main character and a second party member, working your strategy down to the last detail, including even switching out equipment during battle. Of course, you can leave that other party member on auto, but you’ll find yourself wondering if you should have played a tighter game when you die. Most of all, I liked the boss battles at the end of dungeons. They’re a nice change of pace that will try your skills and strategy.

Die-hard, devout rougelikes may feel the urge to gripe about the fact that you can reload from last save when you die (on Easy mode), but I think most gamers will be glad that this game is more player-friendly overall. And while it is more friendly, know that you can still die. You will die, regardless of how skilled a gamer you are. If you’re looking to be beaten over the head with difficulty, you won’t really see much of that until the second half of the game. It does pick up after a bit. Everyone else: If you’re not a stickler for difficulty and are looking for an enjoyable challenge on the Wii, Shiren the Wanderer is a good choice.

Score:  7 — Good (7s are solid games that definitely have an audience. Might lack replay value, could be too short or there are some hard-to-ignore faults, but the experience is fun.)