If you would have told me back in my Sega Genesis days that I’d be playing one of my favorite carts on a tiny phone touch screen, I would have called you a dumbass. I’m the dumbass, as I’ve been playing Sega’s port of the classic strategy role-playing game on my phone for awhile now. And it’s every bit as good as I remember.

Some old games don’t hold up as well, bet Sega’s classics have a way of shining (see what I did there?) in every port they do. And they do a lot of ports.

We have a little review here on the iPhone version of Shining Force that focuses on the iPhone-specific features of the game. It has always been a good game, regardless of control. It’s still a good game, even on my phone.

The old story goes like this: You’re a little wuss that has some sword skill, but you’re still in training. [Pay no attention to the hero on the US boxart. You’re not that muscular or old.] It turns out that things are going south in the land of Rune, and you and your young friends are the only ones left that can fend off the evil Runefast and protect your home. It’s kind of a tired story, but you won’t mind because the strategy gaming is that good. 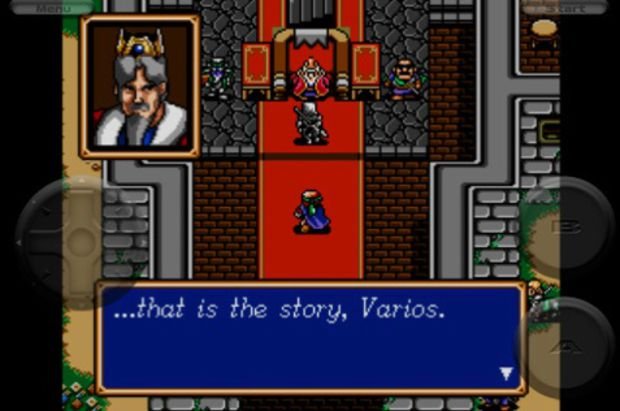 Strategy role playing is the order of the day, with the classic turn-based model we saw in the early console days at work here. You’ll always play as a small, inexperienced party that is against amazing odds, moving one party member at a time on a map. You’ll always find that you barely make your way through, battle after battle. This points to the game’s delicate (and perfected) balance, and that’s what I think makes the game so fun. If you’re young enough that you didn’t play Genesis SRPGs, know that this plays like Final Fantasy Tactics, though it is a bit less complex. But just like Tactics, it has that wonderful balance that makes you gradually stronger, but not strong enough to guarantee a win. You’ll always have to work for it, putting your best strategy to use. That makes victory that much more rewarding, and this balance rings through for just about of all of the Shining series games.

I’ve always loved the look and design of Shining Force. The very nice character art always stood out in my mind, and the cinematic, widescreen-ish battle screens blew me away when I was a kid. They still look nice on the iPhone. In fact, the look doesn’t really change at all, though you’ll get some benefit in the color and resolution departments seeing as your phone probably has a higher spec than our televisions did back in the day. You can play the game in either a full-screen (stretched mode) with translucent virtual d-pad and buttons, or switch it so that you see the game screen in a smaller box, with more of a true view. Know that the latter is pretty small, and with the game’s small sprites you may find that you’re straining your eyes a bit. It still looks great either way, especially on the iPhone 4’s fancy screen. 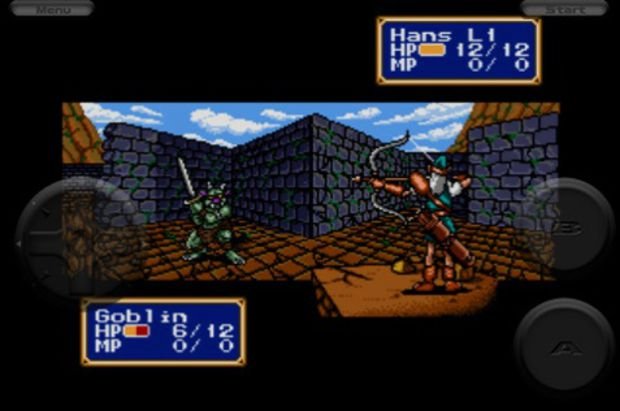 Being an SRPG, the touchscreen control is fine. Nothing fancy here: Virtual d-pad and buttons do the trick. There’s no touch placement or anything like that — this stays true to the original. If you boil it down, this is really just some emulator running the original ROM. Granted, it’s slightly less charming to think of the game in this way, but the emulation is perfectly fine. There’s not a lot of required movement in this game, so the virtual control is fine for things like troop movement and menu navigation. You may have some instances of moving in an unintended direction, but seeing as how you have to confirm every move and choice in this game, it’s not that much of a problem.

The iPhone’s touchscreen is ideal for RPGs. I’ve been waiting for Sega to pull out some of the oldies like this, and I’m glad that Shining Force was one of their first choices. It’s the perfect on-the-go RPG as you can get into a couple of battles in your free time, and then back out when you have to stop. Coming back, you can scroll over the map to remind yourself of the situation and troop placement.

It’s not like Sega did a lot of work to put this out on the iPhone, but that doesn’t change the fact that Shining Force was a fantastic game. It still is, and for only $2.99, it’s a no-brainer.

Score: 8.5 — Great (8s are impressive efforts with a few noticeable problems holding them back. Won’t astound everyone, it is worth your time and cash.