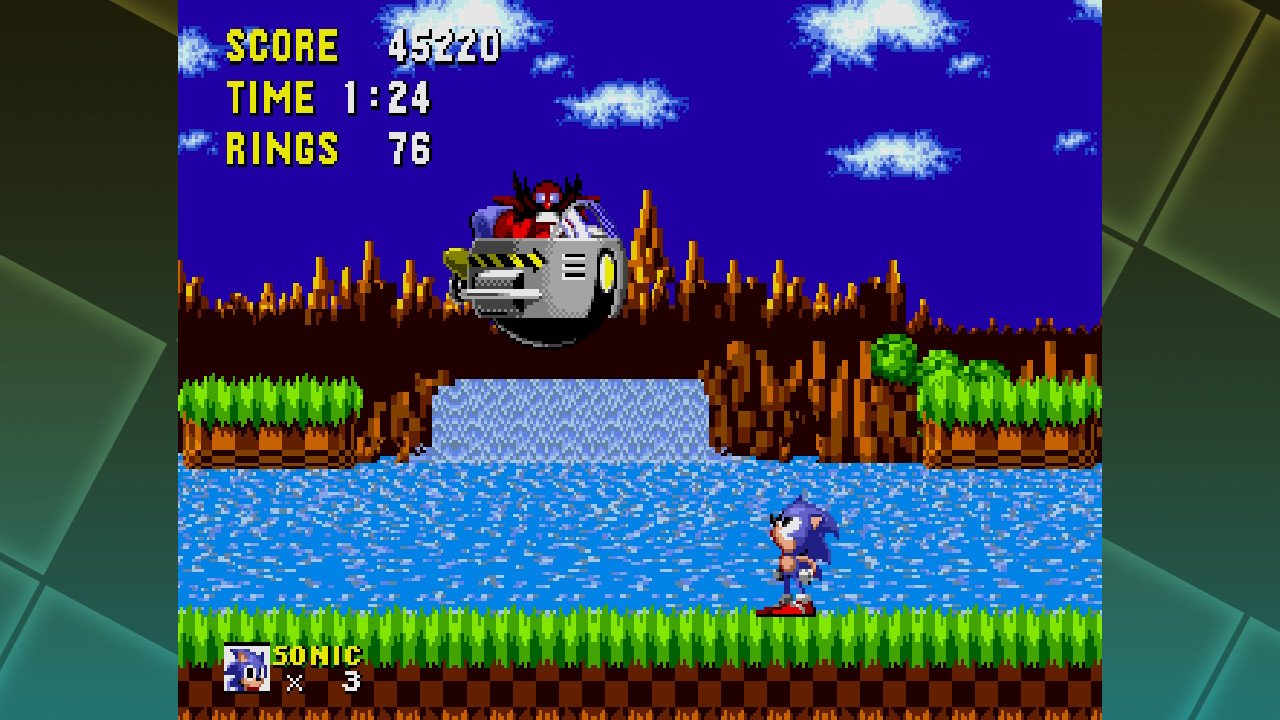 To be this good takes AGES

A new console generation, a new Sega compilation. That seems to be the mantra Sega has adopted with its back catalog. Unlike Nintendo’s drip-feed approach to Virtual Console (RIP) or Sony’s refusal to even allow for backward compatibility, Sega has ensured its biggest retro games are available on every platform imaginable.

For the Nintendo Switch, not only will the recently released Sega Genesis Classics compilation be available, but individual game releases are coming to the eShop. Branded the SEGA AGES collection, these ports of the classics act like compendiums of the different versions each title saw. Arcade ports, Genesis, and even Mega Drive (international) versions are all collected into one download with a few bonus features thrown in for good measure.

The first two of these releases, Sonic the Hedgehog and Lightening Force: Quest for the Darkstar, show promise for what could be coming in the future. The only real downside is the price tag, which will turn many a player off. 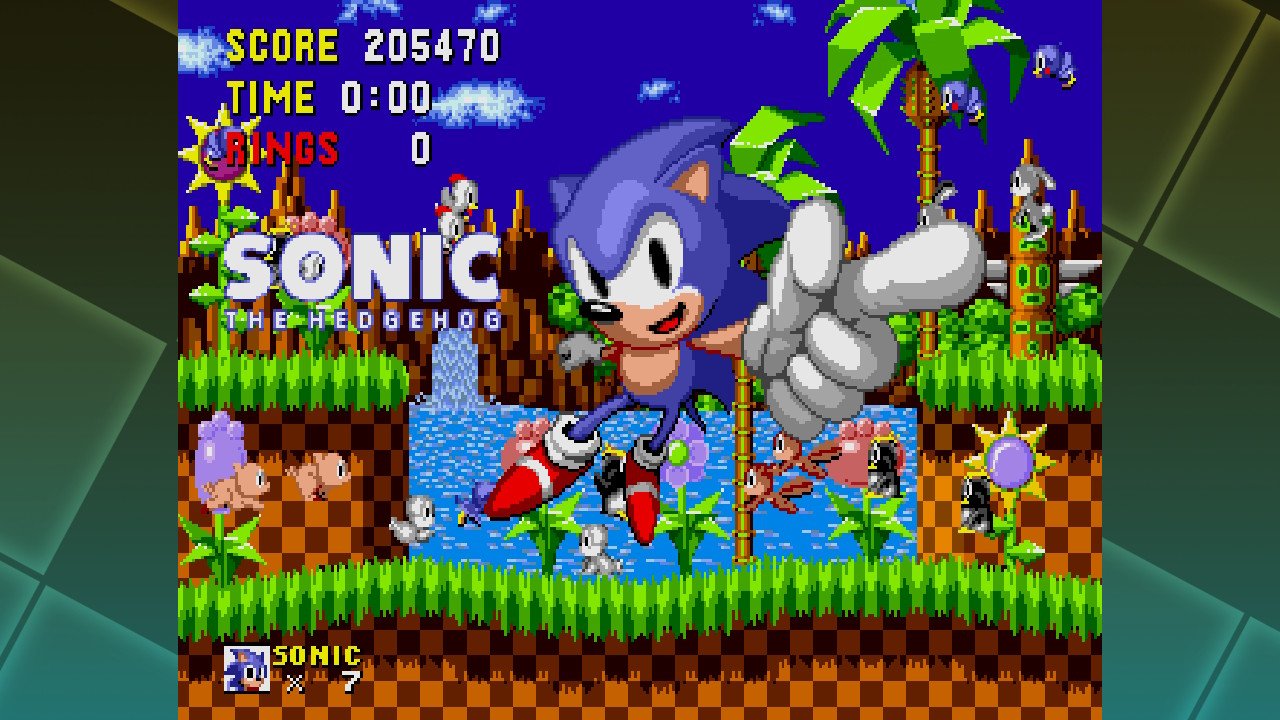 I don’t think there is a person alive that hasn’t played at least one Sonic game. For me to give you a review like it is brand new is pointless, because the DNA of Sega’s first shot at taking down Super Mario can be felt in every other title starring the blue blur. Sonic became a cultural icon in the ‘90s and nearly toppled the unstoppable Nintendo for a short while.

While his popularity has dipped and spurred a lot over the last 25+ years, going back to the original shows just how well Sega did the first time around. I wouldn’t call the experience magical or anything, but the original Sonic the Hedgehog is still a good enough time. It has colorful graphics, a solid soundtrack, and some creative little boss fights to keep things feeling fresh.

I’m not one to harp on Sonic needing to be about speed, but this first game really doesn’t have a lot of it. You can tell that even the designers over at Sega weren’t sure how to best capitalize on Sonic’s unique attributes, because the original game almost plays like a Mario tribute title. There are numerous sections with tricky platforming and you’re often taking small steps forward instead of sprinting at the speed of sound to your destination. The series would definitely improve the flow of its levels from this first title, but that doesn’t mean these early locales don’t hold some of the charm of later games.

Even now some 20 years after I first owned a Genesis, I’m discovering new paths through well-trodden levels. I’ve also finally realized that every single platforming challenge is the same thing, which sort of sucks the fun out of the equation. There are only so many times you can slowly wait through alternating platforms before you crack and Sonic the Hedgehog uses the gimmick for every level.

At least with the SEGA AGES release, you not only get both the Japanese and arcade variants (Sega Mega Play), but the inclusion of the spin dash from Sonic 2 and the drop dash from Sonic Mania. It doesn’t hugely alter the game, but can help in those bits where Sonic just fails to get up an incline and was forced to backtrack before. Now you never really need to stop moving if you master the level design and it can feel a bit more like its sequels.

I don’t think the “Ring Keep” mode or even the super limited “Challenge” mode add much value, but it is nice to have extra options for when you feel the need to revisit the game. Be warned, though: the Mega Play version is tough as nails. I actually died on the first level, which hasn’t happened since my age was in the single digits. 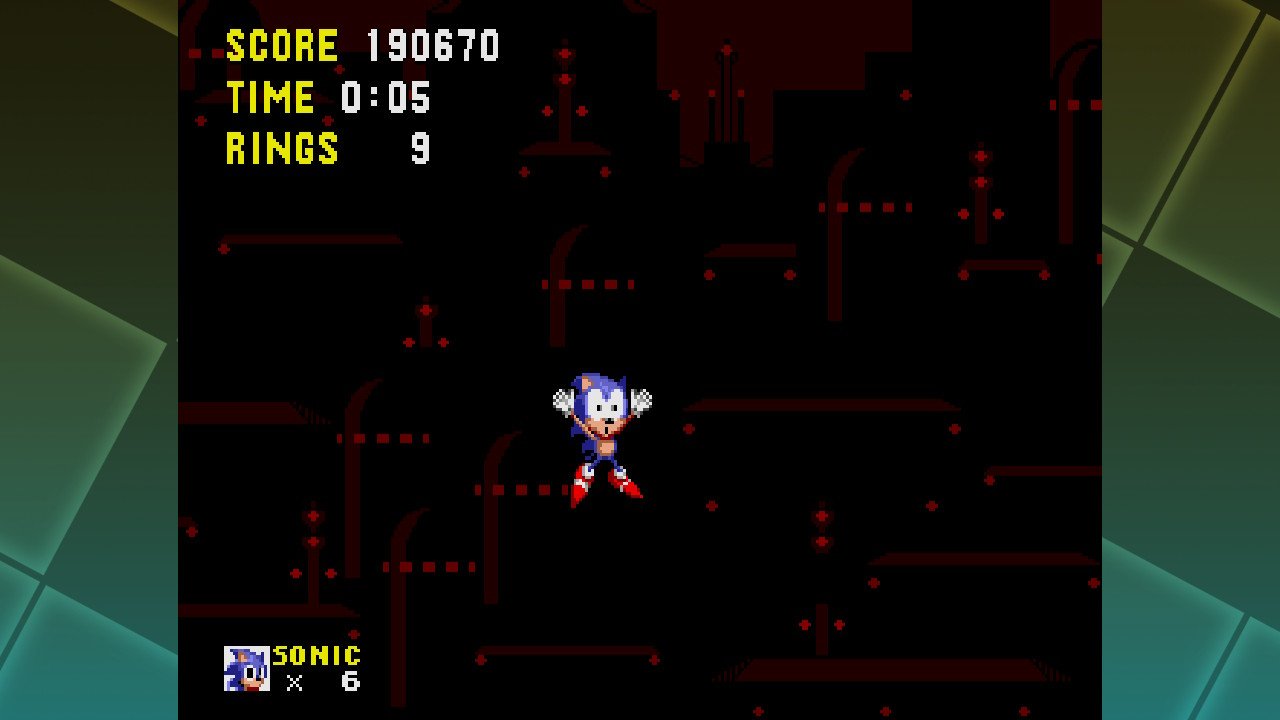 Unlike Sonic, I don’t have a personal history with Lightening Force. Originally released as Thunder Force IV in the rest of the world, the game is a horizontal shmup that bears a strong resemblance to the GRADIUS series by Konami (though Thunder Force actually predates it by a few years). You’ll start with a level select screen to pick a sequence of levels and then be shot off into some distant worlds with little explanation. There is a story going on, but a lot of that resides in the opening cutscene that is incredibly easy to skip.

As for how everything plays out, I’m not really sure I can speak from too much experience. I was never the biggest fan of brutally difficult shooters as a kid and I’ll readily admit I used a lot of save scumming to reach the final boss. There are bullet patterns to dodge, power-ups to collect, and various strategies to employ, but it takes a lot of patience and practice to master games like this.

The weapon selection is what defines Lightening Force. In addition to a standard blaster, you’ll have access to a gun that shoots behind you, a heat-seeking pulse cannon, some burrowing bombs, and a free-range missile launcher that fires in the opposite direction of your movement. These weapons allow you to constantly shoot at your foes regardless of their position on screen, which makes for some devious enemy placement. 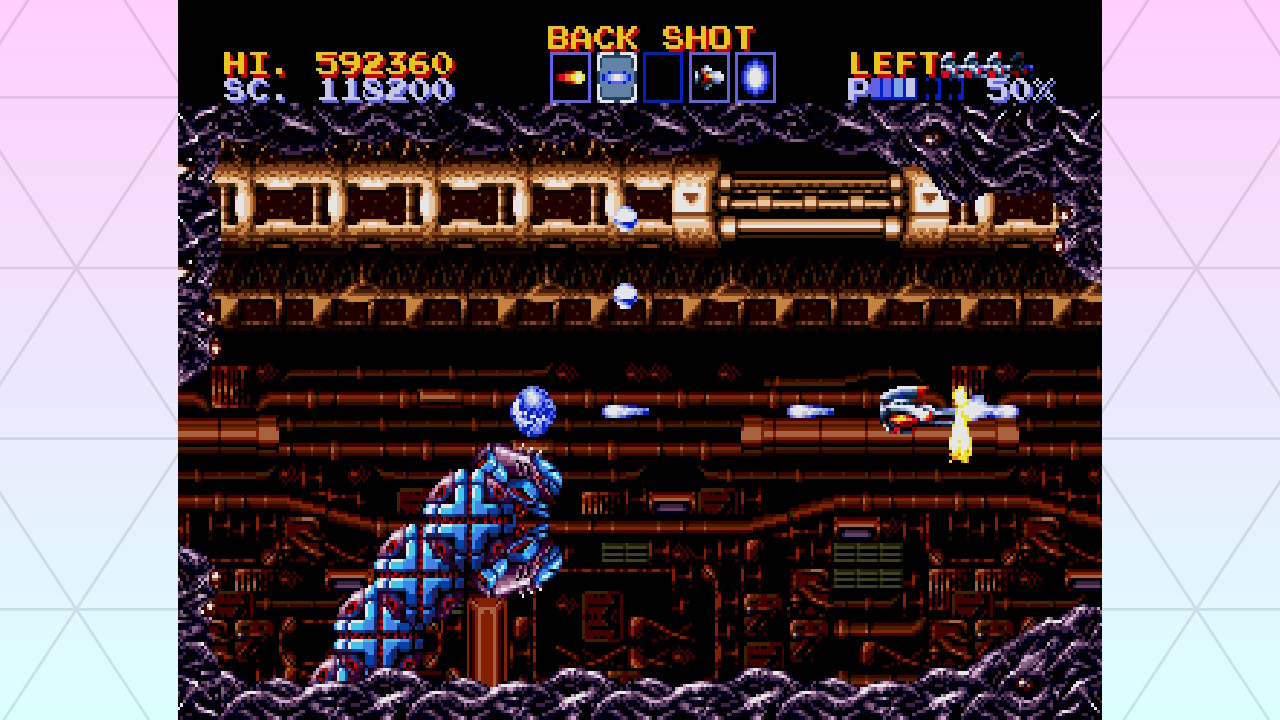 What I can speak about, objectively, is the visual design. Clearly, Lightening Force was pushing the Genesis hardware to its limits, because there are multiple parallax layers and scrolling decals going on that make levels appear almost 3D in scale. You’ll fly through various landscapes with distinct themes and visual quirks that are placed to strategically make you miss incoming enemy fire.

My main problem comes from how the color palettes sort of blend together. I’m not sure if I’m a fan of the visuals or not, but I can’t stand getting hit by a green laser that is scrolling on top of a blueish background. That feels a little unfair and the game only gets progressively more difficult once you pass the fourth level. Trying to blast through those without really understanding the nuances of Lightening Force is just asking for pain.

At least to that end, this SEGA AGES release includes what is referred to as “Kids Mode.” In a touch of extra brutality, dying in Lightening Force reverts your currently equipped weapon back to its default state. You can even outright lose your other weapons, which means no more homing shots while you focus on dodging. That can be devastating when you’re late into a level and is what pushed me to utilize the save states so prevalent in these re-releases. I definitely cheated myself out of a genuine challenge, but Kids Mode actually removes this feature and keeps you fully powered up regardless of perishing. 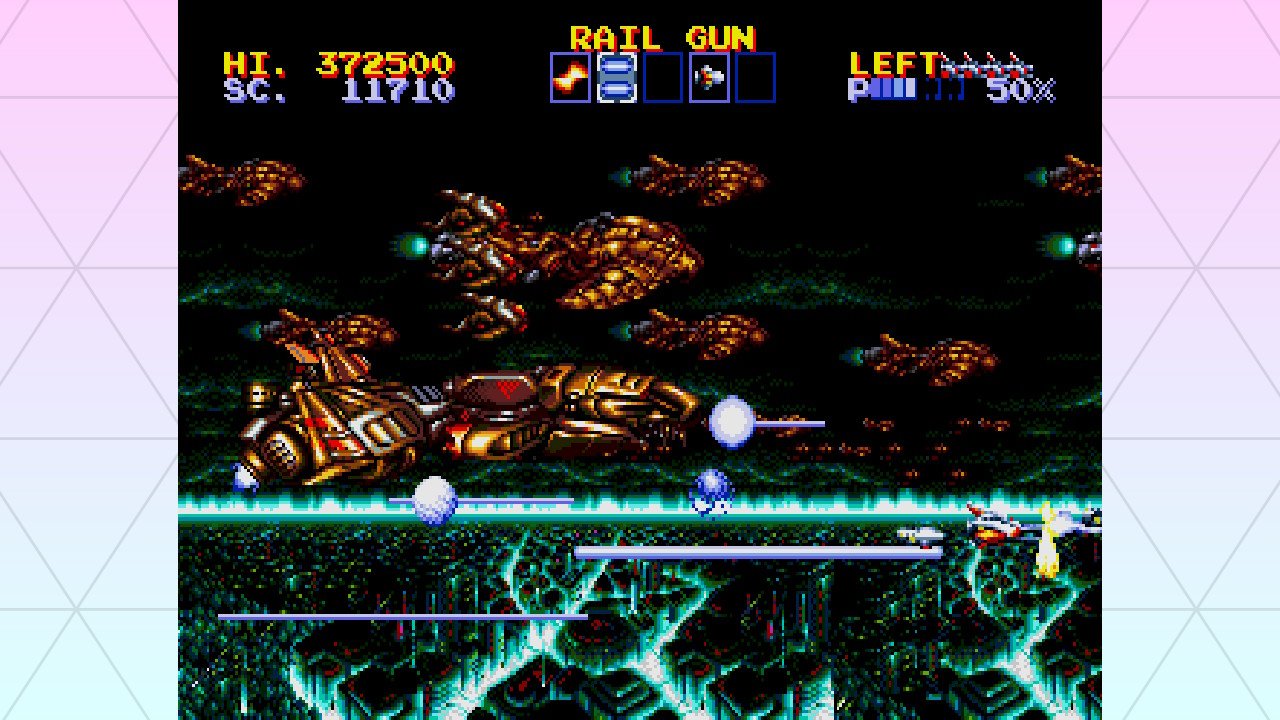 Apart from that and containing the Mega Drive Thunder Force IV named version, Lightening Force doesn’t really have much else going on. You can unlock the ship from previous Thunder Force games, but this release has less going on than Sonic the Hedgehog. No new features are added and a challenge mode is absent, so you’re stuck with just the main game or Kids Mode.

That isn’t to say that this release is bad. I actually quite enjoyed my time playing through the 10-level campaign. I was cursing up a storm, but shmups like this were so well-executed back in the day that revisiting them doesn’t feel superfluous. You’ll get an expertly honed difficulty curve with some cool enemy designs and unique boss encounters. What’s not to like?

As for features common across the SEGA AGES line, both titles feature various graphical filters and wallpaper borders you can use to customize the display. I don’t mind having pillarboxed images when I play retro titles, but a few of the less expressive borders actually looked nice to my eye. It is cool to see the Japanese Sonic box art present as an option, though. 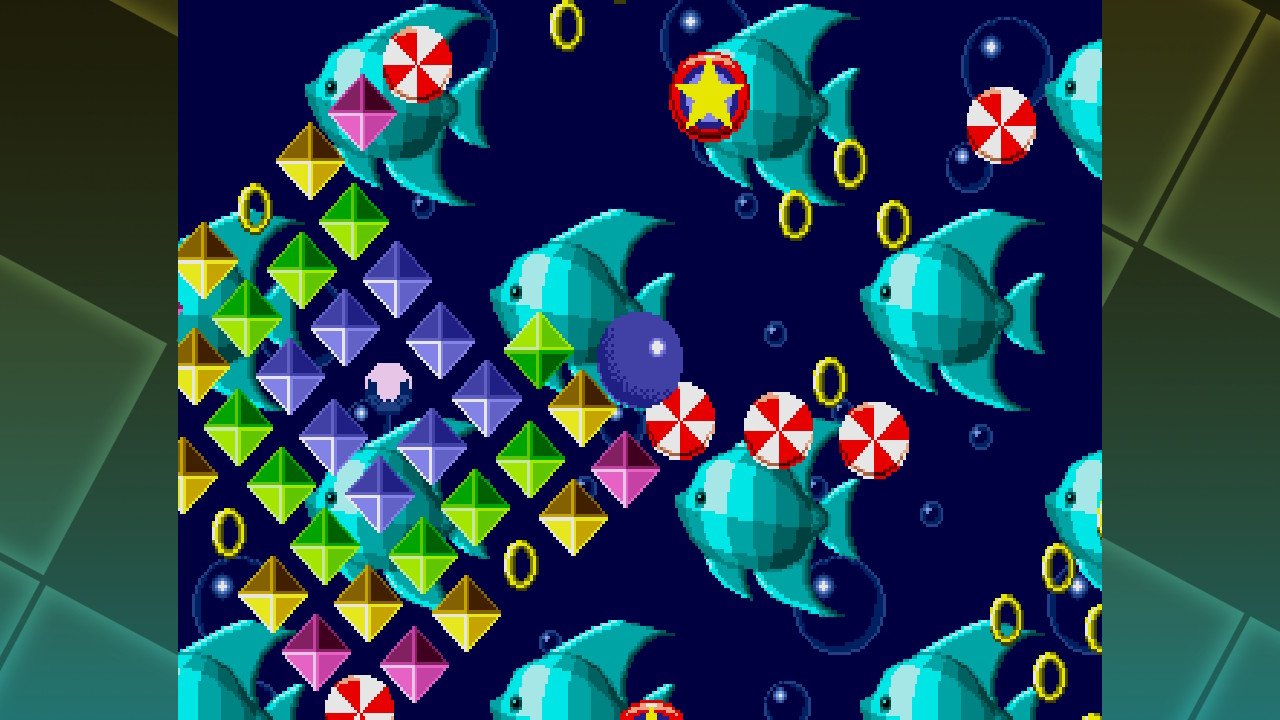 The Joy-Con can be a terrible control method for a platformer, but Lightening Force actually feels wonderful with a proper joystick. I can’t imagine rocking a d-pad while trying to navigate some of those levels, but it is nice that you can swap between the two input methods on the fly. You can even customize the controller layout to however you see fit, which can suit your own personal style if you need it.

I’m not big on the CRT filter or stretched widescreen options, but that last word is the key here: options. Nothing is forced on you and you’re free to turn off all that pointless pixel smoothing and screen stretching to render the image in its original format. It would be a much sadder world if all of our retro games looked blurry.

The biggest downside is just going to be the price. The Sega Genesis Classics collection goes for $29.99 on every platform and contains over 50 games. While those versions don’t have added features (apart from upscaling and save states), paying a total $16 for two games seems like a huge rip-off. Maybe you really only want a single title, but buying each Genesis Sonic game (should they ever show up) would run you about $48. Even if you limited that to the 2D platformers, that is still $32. I don’t see how you could justify this even with the added drop dash ability. 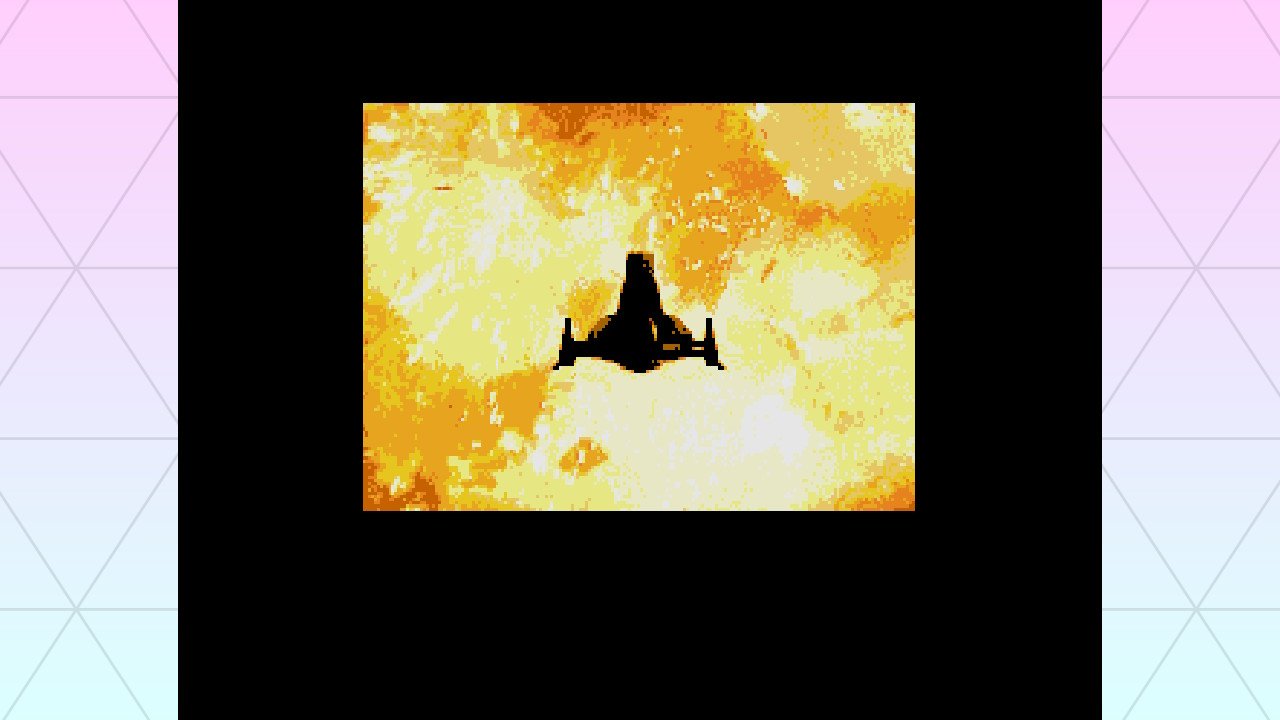 Putting the price aside, both of the SEGA AGES’ releases aren’t of bad quality. They accurately replicate the Genesis titles and even include versions from different regions. A few extra features make the games feel more accessible and having them on the go without compromise is great. Maybe I’m not as entranced by Sonic the Hedgehog as I used to be, but I can’t knock what is a faithful port of Sonic’s debut.

I just don’t know if quality is enough to recommend over an all-encompassing collection.

[This review is based on a retail copy provided by the publisher.]