Since the initial “wink, wink” line, we all knew that Secret of Monkey Island: Special Edition was bound for the App Store. Launching on July 22nd, we were told that this version of the game would be very similar to its platform counterparts. We weren’t misled.

Because of how close this title is to the other versions, I won’t bother reiterating what the game is about, how the Special Edition additions factor into general play, or get into why the game is so magical. If you’re unfamiliar with Secret of Monkey Island or the Special Edition, you would best be served by reading our original review of the release here.

This review, instead, is about the additions and differences specific to the App.

Hit the break for it. 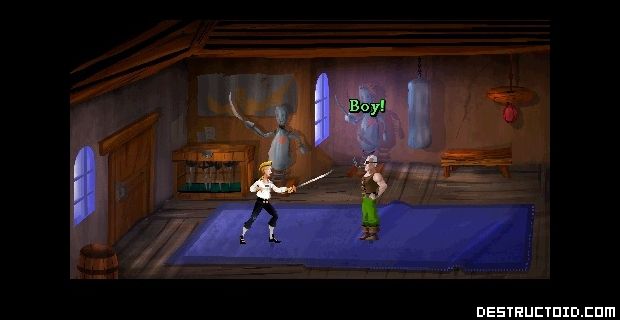 The point-and-click adventure genre seems like a natural fit for Apple’s mobile platforms. The interface is conducive to the experience. We click and clack in the Mail App and our Twitter or restaurant-finding clients all day, idly pushing through menus and selecting items with the press of a finger. Most adventure titles work in much the same way and Secret of Monkey Island: Special Edition isn’t excused.

SMI: SE for the App Store has all of the things you remember from the not-so-long-ago release on the bigger platforms. It does have a few key differences — zoom functionality, object-verb contextualization — that give you the tools to play the game on a smaller platform. This version has issues, most stemming from the lack of platform-specific design change. While occasionally frustrating, the issues don’t kill the vibe or interfere enough with the core game for this to warrant a poor score.

Not long ago, I reviewed this for the PC and Xbox LIVE Arcade. Not much has changed between this mobile version of the game and its counterparts. You can still hear the sharp voice acting, receive hints on the fly, and toggle the visuals between the original version and the new art. 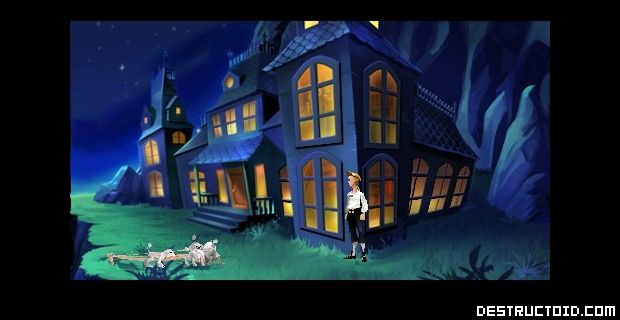 The differences are hardware-related. Many of the fine visual details are lost on the smaller screen. For example, I needed to squint to see the sword nestled on the cluttered shelf in the item store or strain to see a mug of Grogg in the SCUMM Bar. It wouldn’t matter if these items were sheer atmosphere, but they’re not. You will need the mug and the sword to solve a riddle or two. The multi-touch zoom option helps to pinpoint this stuff, but you need to know what you’re looking for.

If you’re unfamiliar with the original, you won’t know what you need from the environment. The zoom option reveals a mash of pixelation and obscures everything else. The uninitiated will be forced to toggle the zoom constantly to find all the little trinkets in the environment. The fresh player will not. The loss of the fine details could be a severe hindrance. Also, the action cursor doesn’t like to cooperate quickly when zoomed — it’s a chore to be stuck in the zoom state.

Verb commands have been contextualized in this version. As you drag the cursor across the screen with your finger, the game automatically assigns verbs to objects of interest and defaults to movement when nothing is around. It sounds great on paper, but it proves finicky in reality. A man’s stomach won’t register the “Talk to” command, but his upper chest may. Objects play by the same iffy rules. 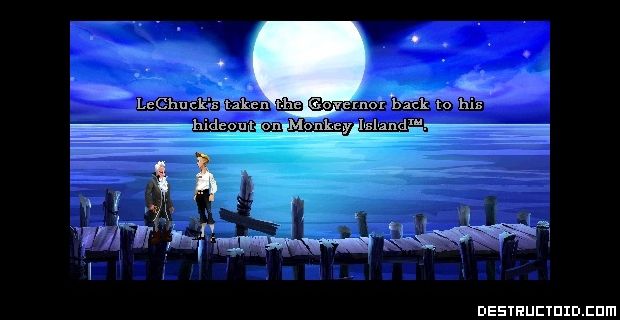 This isn’t much of an issue. The same UI from its counterparts has come across the platform divide. The menu buttons are large enough to pick without issue, although the related problem from the other version rears its head: it’s hard to combine items fast. But I had little problem delivering the Grog, which is something I can’t say about the XBLA version.

This version takes some time to get used to. I went at it with an App mindset. I expected that I wouldn’t have to fiddle with a cursor and played the game as if it was much more intuitive than it is. LucasArts isn’t trying to pound a square peg in a round hole. This version works fine. Verb commands and the item list can be accessed with a few touches, and moving the cursor isn’t that much of a drag. It just took a while for my brain to register that I was playing a port of a game intended for use with other platforms. After an hour or so, I got into the rhythm again and somehow, even after playing the game mere days ago, loved it all over again.

Secret of Monkey Island is the cornerstone of adventure titles and this port does the game justice. While it would have been nice to have a more specialized version, I can’t argue against what LucasArts created here. This is a solid port and a fabulous way to experience MI on a bus or at work when no one is looking. Give it a spin.