Scribblenauts has been one of the most eagerly anticipated DS games of the year, if not the biggest. Its concept was ambitious and its charm captivated all who saw it in the run up to the game’s release. A game where you can write almost anything you could imagine in order to conjure objects, people and monsters seems almost too amazing to be true. In a way, it kind of is.

5th Cell’s latest portable outing is brilliant, don’t get me wrong, but the genius of the concept and the realization of ambition have been tarnished by frustrating controls, vague objectives and the fact that, despite having over 22,000 items to interact with, a vast majority of them are basically worthless.

So, is Scribblenauts able to win hearts through sheer force of concept, or is the reality of the game’s many issues too much to ignore? Read on as we review Scribblenauts. 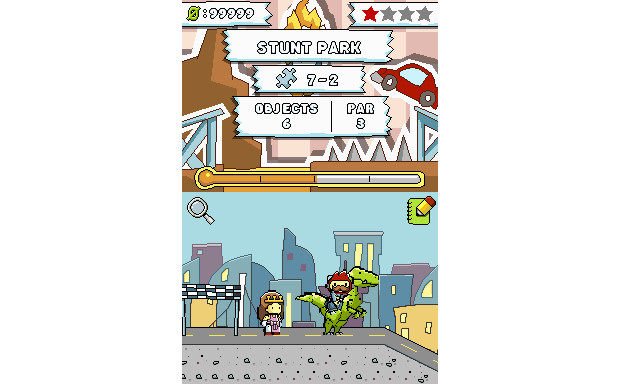 Scribblenauts has no real story. The hero of the game is Maxwell, a young man with a love of rooster hats and a need to collect shiny objects known as “Starites.” Each of Scribblenauts‘ many levels revolve around solving puzzles in order to get Maxwell to the Starite, and you’ll need to make use of your imagination and vocabulary to achieve your goal.

The big gimmick of Scribblenauts is simple in concept but absolutely staggering to see in practice. Players can write whatever they like — provided it’s not copyrighted, rude or based on a real person (generally) — and that object, machine or creature will appear in the game as if by magic. Machine guns, vampires, hydras, Satan, anything you can think of will be conjured up and act in a certain way. For instance, an Atheist will run screaming from God while a Terrorist will attack anything that moves.

The sheer experimentation is where Scribblenauts truly shines, and although it’s far too easy to break the game and come up with words it doesn’t recognize (it happens disappointingly often), there is endless fun to be had in dreaming up strange monsters and bizarre sci-fi contraptions to see what happens. In fact, perhaps Scribblenauts‘ best section is its start screen. The playable pre-menu section is a virtual sandbox where you’re simply free to play with the game’s mechanics and see what happens without pentalty. The price of entry is worth the title screen playground alone. 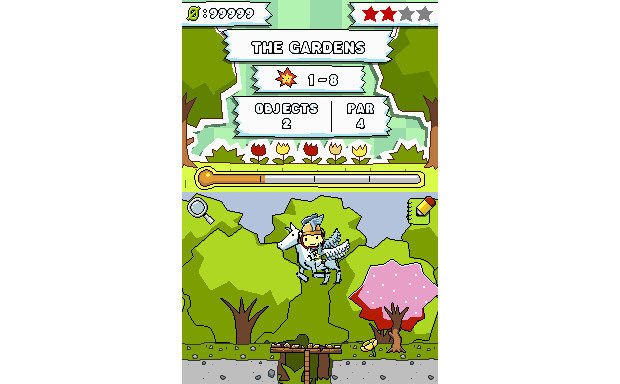 Sadly, this sense of free-for-all experimentation is not something the “real” game actively encourages. Your rewards for completing a stage are governed by how many items you conjure up in a given stage, with a strict par number. If you go above the par number and conjure more items than you should, you don’t get a reward. What this essentially means is that experimentation often feels punished rather than praised, and if you are attempting to play the game properly, you’ll be constantly restarting stages with each useless item you create. Oh and trust me, a vast majority of items are simply useless.

Scribblenauts can be a frustrating game. A very frustrating game. In many ways, the convoluted logic at work apes old school point-and-click adventure titles, with items acting in ways that only the developers themselves could have foreseen. While random activity and crazy shenanigans would be great in theory, the game’s strict rules and sometimes unforgiving environments mean that you simply don’t have time to mess around with objects that you know should work in a certain way, but simply don’t.

As the game goes on, the unhelpful hints and deliberately distracting onscreen clutter can drive one insane, and if that doesn’t get on your nerves, the frankly awful controls will. Scribblenauts suffers from a dismayingly common problem unique to DS games, where developers have tried to make the touch screen do too much at once. You’ll be making Maxwell move, jump, hold, throw, ride, use and shoot, all with the stylus, and like most DS games that put too much of a burden on the interface, the game frequently gets confused, with Maxwell jumping to his death repeatedly and the items getting picked up against one’s will. The controls are a mess, and the game feels incredibly sloppy because of it. 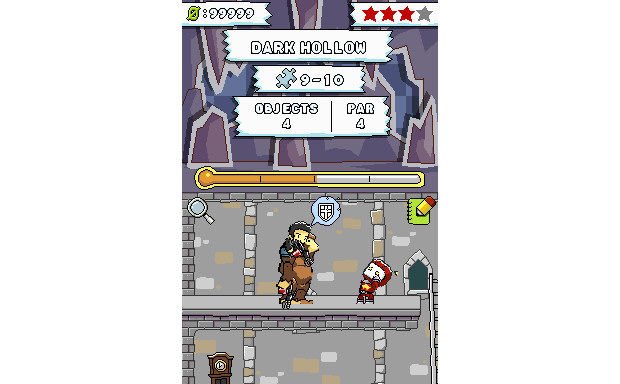 The chaos of the gameplay just doesn’t gel with a title that has so many options. Sometimes I’ve completed levels not because I planned to, or because I was particularly skillful, but simply because things fell the right way, or Maxwell glitched his way through an object to the Starite. A number of items only work when they want to work, like the wings, which will sometimes just decide to not let Maxwell fly. Scribblenauts‘ physics can sometimes send characters into spasms and there are moments where you’re forced simply to rub the stylus around randomly and hope for the best. With so much to do, there is so much to go wrong, and a tighter experience was damn near essential in order to reduce confusion and irritation. Unfortunately, nothing has been tightened whatsoever.

For all its problems, however, there is no denying that Scribblenauts is still somehow an incredibly good, clever, witty DS title that deserves attention. The game is split into “puzzle” and “action” levels, with the former revolving around solving problems and the latter revolving around environmental nagivation. Both have some truly brilliant stages, although I personally prefer the puzzle sections. Stages can be replayed, but any items used in the last play cannot be used again. This is truly the best way to play through the main game, as being forced to think outside the box and use evermore contrived methods of completion can be ridiculously satisfying when pulled off.

When it’s not frustrating its players with bad controls and deaths that come out of nowhere, Scribblenauts can astonish with some undeniably ingenius puzzles and terrific character interactions. The game’s sense of humor makes it particularly endearing to the point where I simply had to return to the game ever after switching the DS off in frustration. This is a game where you can actually summon a Manticore, and for that simple masterstroke it deserves much credit. 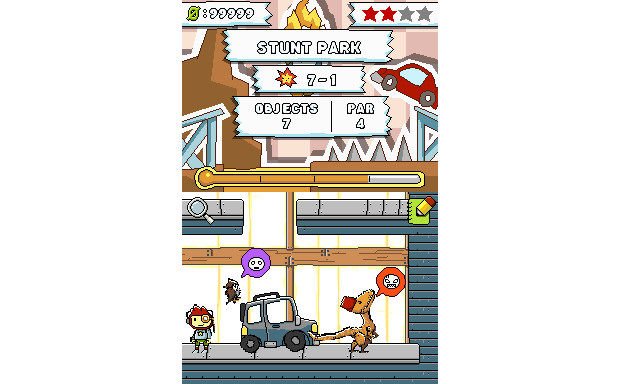 Trying to complete levels without resorting to weaponry or attempting to think of items you’ve not used yet adds an extra level of challenge and players will earn “Merits” for completing stages while meeting certain conditions. It’s always pleasing to see a long list of Merits once you’ve guided Maxwell to a Starite in an inventive and original way, and it’s these encouraging moments that spur the player onward and compel them to continue wading through the masses of content that Scribblenauts has to offer.

It’s just a shame that for every satisfying moment, there are about two frustrating elements. It’s a game that makes me want to simultaneously hug it and punch it, and I guess that such a paradox of emotions is only fitting for a unique and mind-boggling title such as this. It’s a game that is built upon limitless boundaries, yet players are continually constrained and restricted. It’s a game that offers endless experimentation, yet curiosity often goes unrewarded. The sheer conflict that is what Scribblenauts wants to be versus what Scribblenauts actually is makes for, perhaps, the most frustrating aspect of all.

I cannot say I’m not disappointed with the final product. For all its promise, Scribblenauts just cannot live up to its own ambitions. It’s not that what 5th Cell tried to achive is impossible, it’s just that this particular attempt was, to be honest, nowhere near as great as it could have been. It lacks polish, the gameplay is too loose, cluttered and messy, and the fun is severely hampered by numerous problems that never seem to let up. 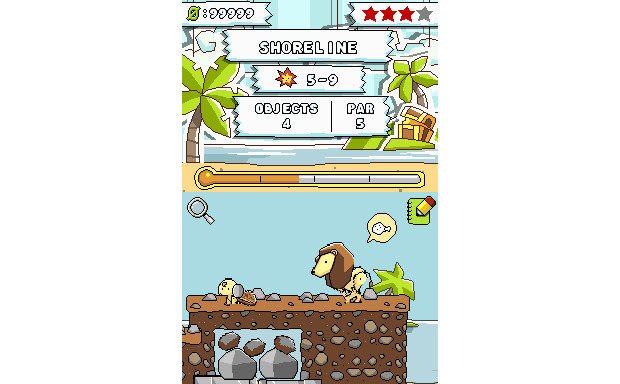 There are those who will pick up Scribblenauts and love it completely. However, I fear that there are those who will hate this game, because once you look past the brilliant gimmick and innocent charm, you see a rough game with bad controls and a sense that things just could have been done much better. I would actually recommend that anybody wanting to buy Scribblenauts actually borrows or rents it from somewhere first. It deserves merit and praise simply for what it has accomplished, but whether it deserves your cash depends on just how astronomical your patience levels are.