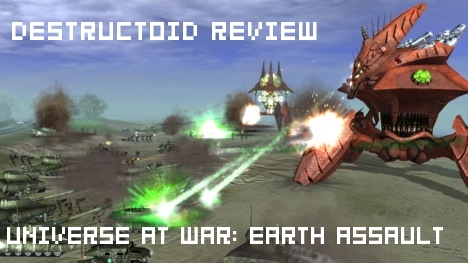 [Welcome to Review Scraps. It’s like what Nick does with the news we missed, but covers reviews that didn’t quite make it at launch. Some of you might find that pointless, but screw you! Debuting in our Review Scraps is Universe At War: Earth Assault. Enjoy, or not. Screw you! – Jim Sterling]

There are a few very distinct arguments that one could make as to why the real-time strategy genre will never be able to succeed on the console platform. The mouse and keyboard interface makes the basics of collecting troops, hotkeys, and micromanagement a fairly simple endeavor. The gorilla in the room with console RTS titles is finding that balance between the button and analog stick that allows players the freedom of navigation as well as the precision required for the genre. The fact that no developer has quite managed to create an excellent console RTS speaks to the feat that is required to do such a thing.

Universe at War: Earth Assault, at least, feels like a different approach. Players will be able to smell what could have been if the porting endeavor would have gone over more smoothly. Universe serves as a reminder as what not to do and what should be brought to the table when it comes developing a RTS for a console.

Universe has an exceedingly rough campaign mode. The story is a bit like Independence Day, minus Will Smith and the cigar-in-the-mouth celebratory punch. An alien race called the Hierarchy has invaded Earth looking for raw materials. The Hierarchy is wildly advanced compared to the humans’ meager abilities, and easily begins chewing up the entire planet. Thankfully, a race of very nice alien A.I., the Novus, whose goal in life is to consistently intervene with the Hierarchy’s plans, decide to mix it up on Earth as well. The third race, the Masari, is introduced through some story mechanics later on in the game, which frankly, I forgot already.

Forgetting about the campaign is probably what Petroglyph wanted us to do anyway. The dialogue is absolutely atrocious and borders on what a four-year-old could conjure up amidst playing with Transformer figurines. The progression of the narrative is just as weak, if not magically retrofitted to flow the succession of increased weaponry and a new race every five missions. The stepping-stones of the missions are not as fluid as they should be considering the jointed nature of Universe. The first few missions of a new campaign are always the easy affairs of guiding troops to yellow rings, but the endgame is often a thrusting of the wildly diverse tech trees and units in a frenzied battle.

One of the things Universe gets right is the balance and uniqueness of the three races. The Novus may look like a failed abortion between the Terran and Protoss, but they do possess some unique features. They’re a fast race, dependent upon their infrastructure and tech upgrades. The Hierarchy are probably the coolest innovation in the game. Because of their slow speed, the race is relies upon its ability to produce troops while engaged in battle. They do this through massive machines that serve as both an offensive unit, as well as a barracks. The Misari are a more traditional race with the unique ability to change between light and dark mode. Light mode promotes offensive capabilities, while the dark mode brings out the defense. This race relies on its ability to stay at its base and refine its tech trees and building materials.

The balance doesn’t matter when the races can’t be controlled fluidly, though. Petroglyph made a decent attempt at creating a control scheme that would work with the Xbox 360, but it falls flat on its face anytime the action gets fast. Hotkeys are abundant, but remembering what the hell the various buttons are supposed to do gets tedious. Also, the differentiation of the menus brought up when trying to toggle groupings or find a builder leaves much to be desired. The little icons are entirely too mundane and can often lead to inexact decisions. Manually selecting groups is not an easy affair either, especially when airborne units are factored into the equation. Instead of a cursor, players have to deal with a green bubble that lacks any sort of precision.

Wonky controls aside, the A.I. of Universe lacks any sort of intuition that is required when missing a mouse. Enemies can walk right through a player’s line of defense, without the smallest hint of laser fire. If an enemy actually decides to attack a unit that isn’t a hero unit, then the majority of the time it is up to the player to tell the friendly unit to fire back. Some of the more hilariously bad scenarios in the game involve watching enemy units shuffle back and forth relentlessly between environmental objects, never even pausing as an entire assaulting force swings by to nuke their base.

The pathfinding in the game has troubles as well. Units will get stuck on buildings frequently, or run the most indirect, ridiculous route possible to a location. This fundamental problem is probably tied into how terrible the game performs. Universe acts like Starcraft on the Nintendo 64. It is slow to begin with, but anytime there are more than twenty units on the screen at once, it becomes completely ruddy and practically unplayable at points.  This is triple the issue over Live as well. The game will run fine and smooth until it’s time for that collision in the middle of the field. Dropped connections or players are par for the course when a game performs this terribly.

It only gets worse when it comes to the graphical quality. Cut-scenes are completely slapped on, including pre-rendered backgrounds. The lip-synching with the portraits is by far one of the worst attempts out there. The real evil comes with troop differentiation. Every infantryman looks the same with the Xbox 360 version of Universe, which makes grabbing specific troops a major fiasco and is ultimately a serious detriment to simply playing the game. Everything is brutally small and unattractive, and zooming in with the camera is like putting a particularly ugly set of blinders on.  In fact, the prettiest thing about Universe is the boxart, and that’s only because it’s not in-engine.

There is a multiplayer mode with several features and ideas, but it is rendered irrelevant because the game is barely playable online. There is also an ability to play against PC players in Universe, but stay away. Their machines are not going to be chugging the way the Xbox 360 version does. It really is unfortunate that multiplayer is so hindered. The campaign often strips the majority of abilities away from the game, making it hobbled. The one respite could have been online multiplayer, if it wasn’t as broken as the rest of the game.

Overall, Universe at War: Earth Assault is a below average experience in any capacity. While I applaud Petroglyph in their effort to make a RTS playable on a console, I cannot let go of the various misgivings of the game. The bad menus, controls, unplayable online component, and terrible campaign mode completely shroud any real accomplishments made in terms of the game’s balance and feel. If you’re a RTS fan and have the inability to play on a PC, my suggestion is to keep waiting for HaloWars. At least that game is being built from the ground up for a console.

Score: 4.0 – (Shows promise, but falls over its own feet entirely too much to be a title that you should consider playing.)