Mediocrity is a word that is quite often used with games on handheld devices, particularly the RPGs that seem to perpetually flow onto the platforms. Recently, I had the opportunity to rekindle an older XSEED game called Brave Story: New Traveler for the PSP. Brave Story is much like any staple RPG. There are random battles, sprawling dungeons, talking animals, allusions to the present, and even a protagonist who transforms from pauper to hero. We have been dealing with these RPG attributes for such a long time that a game possessing them just seems natural.

Brave Story has occasional flashes of good within this archaic mold. At the same rate, the game has a tendency to smash down any of its genuinely unique experience with the same stuff we have been dealing with for years. Where does Brave Story stand on the handheld pedestal? While I can’t answer that, I may be able to tell you if this title is worth your time. 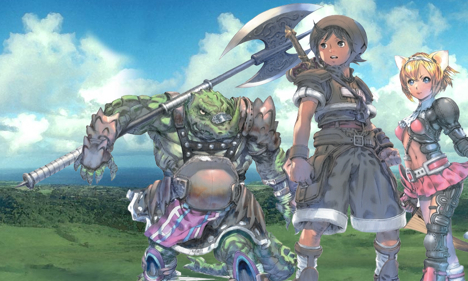 Brave Story begins like most unassuming RPGs. A child protagonist experiences great trauma and is then thrown into the adventure. In the opening of the game, we observe the hip protagonist jamming on his PSP, all the while being curiously quiet as his lady friend, Miki, talks his head off. Then in an epic Lassie maneuver, a dog walks up, barks, and Miki goes to find out why the dog is freaking out. Unfortunately for Miki, going with the dog leads her to be knocked unconscious by some shadowy villain.

The next scene is one of those odd ones, where you know the translation did not go down so well. The protagonist is now in the hospital with Miki lying unconscious in a bed. The doctors examining her can’t find out what is wrong, but know for a fact that she will not wake up and will die shortly. In a fit of what I can only suppose is rage, the protagonist walks to the rooftop where a disembodied voice that tells him that there are alternate dimensions. The voice also reveals to him that frogs can talk, swords are the answer to everything, wishes can be granted, and the world is not exactly what is seems to be. So, the young boy saddles up, heads to the alternate dimension with the wish of saving Miki in his heart, and starts an ambitious journey.

In the other realm, referred to as “Vision,” the protagonist learns that he must collect five little stones to make Miki all right. Of course, these stones aren’t just handed to him. He must meet new friends, scour dungeons, and, of course, confront the villain who put Miki in the coronary-coma. The land of Vision is not necessarily vast, but it is certainly treacherous. Outside of the towns, evil mushrooms, armadillos, beavers, trees, and dragons await.

The story is probably the largest failing of Brave Story. There is an interesting duality between the two dimensions, but it is hardly explored. In fact, the only times that the protagonist jumps back to the real world is when he gets a gem, and its only for a few seconds. I would have really loved to see the idea of two dimensions explored more thoroughly, instead of being used as a cheap plot device to try to convince me that I care about Miki’s welfare. Furthermore, it would have been nice if I didn’t feel so disconnected with the real world. The game rarely confronts any of this. 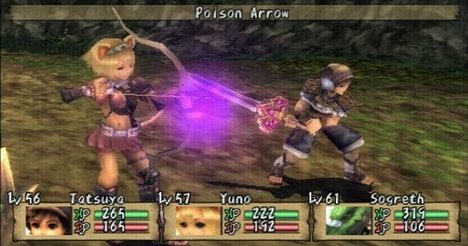 The dialogue, an additional weak point of Brave Story, is short and cheesy. The characters that you pick up on the journey are all cookie-cutter individuals. Yuno is a feisty cat-girl, constantly reinforcing her feistiness. The lizard thing is a brute that abandons his son for the journey with the protagonist. The knight is an egghead, always talking about valor, and the guild leader is the typical strong female character that talks a big show. Again, flesh this out and you might have a decent attempt at engaging people.

The battle system is where the game shines, although fairly dimly. There are a few commands in combat, each regulated by “Bravura Points,” which are essentially magic points. The cool thing about Bravura Points is that they regenerate by utilizing normal attacks. Outside of just “attack,” players can utilize special attacks, as well as maneuvers called “Unity” skills. Special attacks range from magic to fanciful swordplay, but Unity skills allow for the entire team to attack as one. Even better, utilizing a Unity attack only causes the player that called it to lose the turn. That means you can link several together to really trash bosses. There are also quite a few characters in the game, and each combination of characters can learn specific Unity skills with each other.

Of course, every battle is random (minus the boss fights) so there is that threshold of tediousness that can be crossed in the large, especially twisty, and unrewarding dungeons. Towards the middle of the game, you will also start noticing the recycling of monster skins, which is never a great thing when you’re forced to grind to be able to confront the next boss. A fairly innovative twist is available in terms of leveling. Leveling is done in real time, which means characters get instantaneous stat bonuses as soon as the marker is reached. Members not included in the battle party also gain around the same experience as the fighting party. At least the game tries to entice you to switch around members. 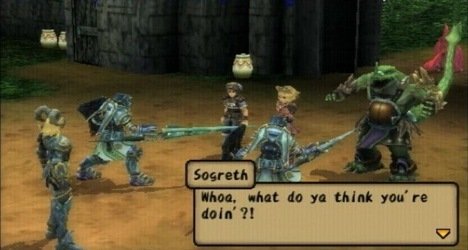 As usual, the game suffers from the town-to-dungeon doldrums. The towns are really nothing more than a guild, an item shop, and a weapon store. NPCs are rarely interactive, and when they are engaging, they put you on dumb tasks involving killing monsters to retrieve items. The guild, on the other hand, is somewhat conducive to a better experience. It can reward players for monsters killed, thus allowing them more money to buy weapons and armor. If there’s one thing the game really hits you with – it is a lack of resources. Towards the end of the game, the only real way to make decent money is to grind it out instead of selling collected items.

Brave Story also has a few interesting asides to it. First, there is bird collecting and fighting. Apparently, the mystical land of Vision has this problem collecting multi-colored chickens, and the protagonist is just the right man to solve it. Chicken collecting revolves around finding a specific spot in a dungeon or cave and being drawn into a 3D arena with a timer, a net, and feed. Feeding the chickens makes them larger; the net catches them. The goal is to catch as many large chickens as possible within the time limit, and then mold them all together to make a super chicken. Although the game never shows it, the process reminds me of that scene in End of Days, where Satan takes the two hot chicks and jams their faces together. After collecting the chickens and jamming them together, you can fight chicken on chicken with NPCs around the worldmap to get items, or pieces of items that you can craft together. 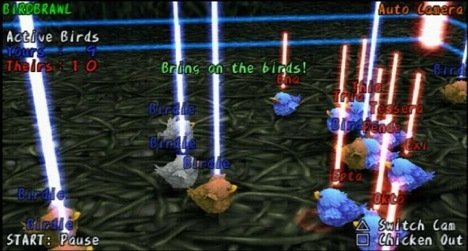 Brave Story is not a spectacularly long game, but it should keep people occupied. There are a few points in the game where it takes over an hour to get to a save point, so be prepared to be weary. If I were to call this game anything other than average, it would be silly. Brave Story is a decent title that barely extends itself past complete mediocrity. The redundancy of battle, lack of exploration, silly story, and exceptionally devoid characters lends to the genre itself. Although, catching chickens and the battle system can be somewhat fun or even occasionally immersing. The visuals are just typical for the PSP, and the cut-scenes are all in-engine for the most part. The soundtrack is minimal, which is great, because what little there is can become annoying quickly.

There is nothing that defines Brave Story: New Traveler. It’s an issue that most PSP owners have with their RPGs, and it was continued with this offering. If you’re bored of strategy RPGs and really want an opportunity to sit down with a traditional game, then I suggest this title. If not, stay away, especially at retail price.

Score – 5.0 (Nothing is spectacular about this title, but it does show some flair in a few key areas. Find it in a bargain bin, or get it on the cheap if you’re interested.)