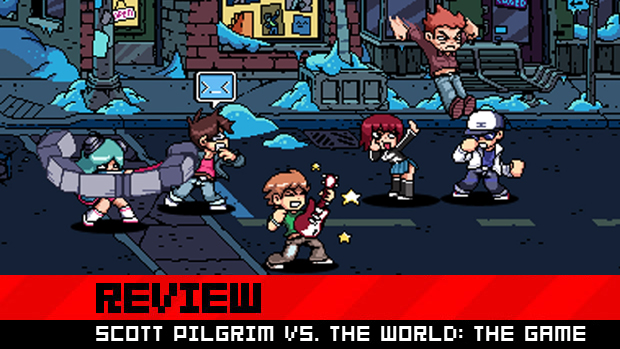 Over the past month or so, I’ve come to really enjoy the world of Scott Pilgrim. The film was great; the comics weren’t quite as great; but overall, I feel that the time and energy I’ve invested into Scott Pilgrim has been well spent. Weirdly enough, I have the most low profile entry in the Scott Pilgrim trinity to thank for that.

I’d known about the comic for years, but I never gave it much of a chance. When I saw trailers for the movie, I felt the same way. This whole Scott Pilgrim thing just seemed to be trying too hard. When the Scott Pilgrim game was announced at PAX East earlier this year, all that changed. River City Ransom-style gameplay? Art by Paul Robertson? Super Mario Bros. 2 character select screen? Sign me the f*ck up.

The game quickly became one of my most anticipated titles of the year. I was sure that it would be at least as good as the Scott Pilgrim movie. It turns out that I shouldn’t have been so sure.

See the full review below for all the gory details. 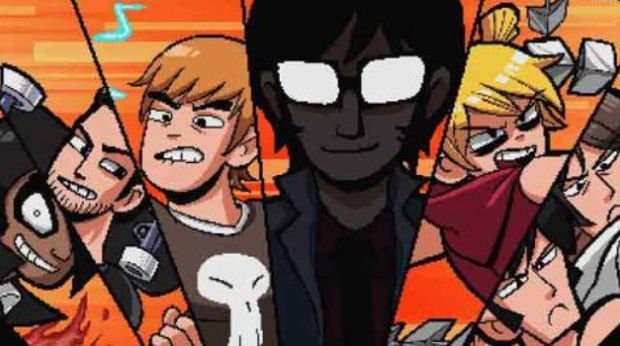 More so than the movie, Scott Pilgrim Vs. The World: The Game is a loyal adaptation of the original comic. The movie is pretty loyal, too, but a lot of characters and situations were cut to fit the film’s 112-minute running time. The game doesn’t suffer from the same limitation, which allows for us to get more than an abridged version of Scott’s “fight my new girlfriend’s evil exes” story arc. In the game, you’ll get the lesbian kissing; the overprotective, katana-wielding father; and a battle against a bionic-armed rock drummer that there just wasn’t time for in the movie. You’ll also get an assortment of ninjas, zombies, and aliens. Those last three are actually new to the world of Scott Pilgrim. This game not only faithfully recreates the content of the comics, but when appropriate, it boldly expands upon them as well.

While the comic and movie use reality as a base and pepper it with videogame logic whenever possible, the game follows inverse proportions. That allows for a lot more surrealism and cartoon violence. The game is a four-player, local co-op beat’-em-up. Violence is a key element to the proceedings from the get-go. 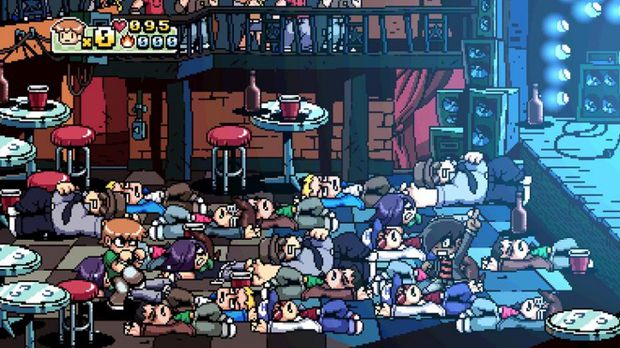 At its core, the game is an unsanctioned sequel to River City Ransom. All the key traits of that game (RPG-style skill and stat building; in-game shops and restaurants; big-head-little-body beat-downs; the ability to use just about anything, including downed enemies and allies, as melee weapons) are here. From there, the game expands upon the River City Ransom foundation with a more involved combat system and sharper focus on teamwork. River City Ransom had two attack buttons. Scott Pilgrim features four (two for standard attacks, two for “guts” attacks that drain your “guts” points) plus jump, block, and taunt buttons, which can all be upgraded and combined to form various combos.

The taunts are a key element to the game’s emphasis on co-op. If two or more players taunt at the same time, they’ll come together in a combination Rock and Roll attack that drains your guts, but does massive damage. You can also revive fallen friends, or even let them borrow some money. It should go without saying that this co-op beat-’em-up is more fun to play with friends, but with Scott Pilgrim, the developers took special care to give players multiple ways to interact with each other. You can also beat the crap out of each other, if that’s more your type of thing. 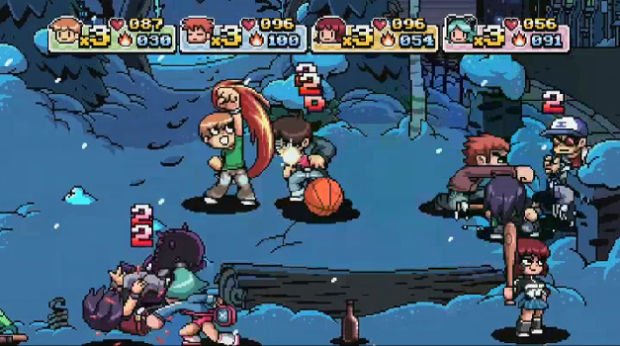 The affection for the pre-polygon days of gaming doesn’t stop there. The game’s graphics and soundtrack feel like a match made in heaven. Both are overflowing with character, and a genuine love for their respective crafts (sprite-based graphics and chiptune music), and classic gaming in general. In order to write this review, I’ve played through the game with each of the four initially playable characters. I also went back into the game’s first level at least ten times on top of that to go shopping, unlock some secrets, and to replay it with friends. I’m still not sick of the level. The music is incredibly charming. The graphics are perfectly humble, and yet, totally impressive. The standing animations of the various characters you’ll pass by are nothing short of legendary. If you’re like me, and you’ve been a junkie for cool standing animations since they first started back 1987 with Mega Man’s blink, then you’re sure to be just as enamored with the visuals of Scott Pilgrim as I am.

Scott Pilgrim’s signature love of classic games comes through in other ways as well. Like with the comics and the film, the Scott Pilgrim game has its share of references to other games, though they aren’t always the same references that preexisting Scott Pilgrim fans have seen before. Todd Ingram, the third boss of the game, combines references to Guitar Hero, Akira, and Super Mario Bros. 2 in a way unlike anything seen in the Scott Pilgrim comics or film — or anything else, for that matter. Those kinds of little touches are all over the place: in victory poses; the overworld map; the level design; the enemies; in just about everything. It may sound like overkill, but in practice, it’s not. The gaming references here are generally more subtle than those found in the movie and the comics. On the whole, they come across more like heartfelt tributes, and less like shameless name-dropping. 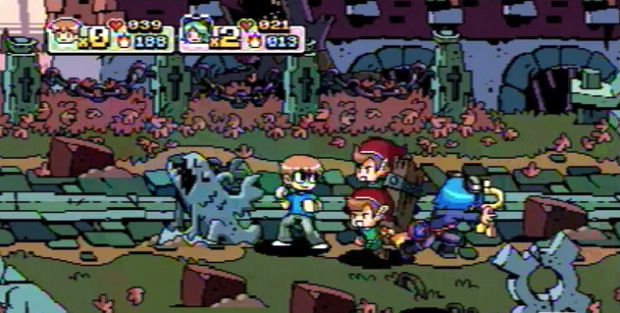 I wish the passionate attention to detail found in the gaming references, soundtrack, and graphics had carried over into the programming. Scott Pilgrim is a buggy mess. Screen tearing; game freezes; character freezes; unresponsive menus; music drop-outs — you name it; it’s all in there. It really feels like the game was rushed out to match the release week of the movie. Bad move, Ubisoft. Get that patch out soon, before you ruin your reputation with Scott Pilgrim fans everywhere.

While you’re at it, you might want to do something about the game’s balance. The game started out with just the right level of difficulty. I was dying when I deserved to die, but I was also being rewarded for playing skillfully and strategically.

Out of curiosity, I decided to save up a little money after beating level three so that I could buy one of the game’s more expensive items. All I had to do was play through half of a level I’d already beaten, and borrow some money from my co-op companion. After that, I could afford the “Bionic Arm.” I was hoping it could give me the ability to swing from lamp posts like a Bionic Commando. Instead, it boosted my strength stat by 50 points. I had inadvertently become unstoppable. I beat the fourth and fifth bosses of the game without even trying. I’m not bragging, either. I utilized no skill or strategy in my battles. I just walked up to them and hit the attack button three times, and they died. Shortly after that, the game righted itself, and became appropriately difficult again. On the first time through, I didn’t even get to see how the fourth and fifth bosses of the game fight. I beat them too quickly to find out. I had to play the game again, taking care not to upgrade my character, in order to see what they could do. 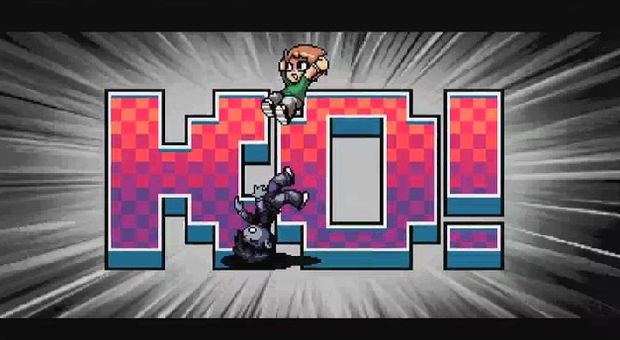 The final stop on this bitch-parade comes from the game’s lack of online co-op. On one end, I don’t care that I can’t play the game online; I prefer local co-op anyway. On the other hand, I have to acknowledge that if you sell a game online, therefore presuming that your customers have their consoles online, PSN and XBLA customers expect their multiplayer games to have online features. It’s the new standard. If you defy that standard, then you’re going to ruffle some feathers.

So yeah, I don’t care that Scott Pilgrim doesn’t have online play. I also don’t really care about the balance issues and the bugs. I love this game. It pushes all the right buttons for me. It stands along Super Mario Galaxy 2 and Cave Story on my “favorite game of 2010” list in a three-way tie. It’s a game that I can pick up and play at any time, start on any level, and still have a hell of a time regardless. The last level is particularly awesome. Every Mega Man 2 super-fan needs to play it at least once in their lives. That said, I can’t give the game the near-perfect score that reflects my subjective experience with it. The game drops below the modern standard in too many objectively observable areas. If they patch the bugs, fix the balance, and add online play, this game could be a perfect 10. For now, it can only score a…