Let’s face it: old games rarely withstand retrospective criticism. Many of today’s classic titles and pioneers would be found nigh-unplayable by future generations of gamers, spoiled in part by modern titles that have learned from those same pioneers, bringing new twists and innovations with every iteration.

Thus, it would be fair to assume that Sakura Wars: So Long, My Love, a title that is — to Japanese players at least — now five years young, would compare, well, unfairly against the games of today. Five years of evolution, innovation and changing tastes would surely have passed it by, yes?

Thankfully, that’s not the case for Sakura Wars. While temporally ancient, it is, to you and me, nothing but new. Unless you belong to a rather specific niche of players, its experience is quite unlike anything else out there.

Read on, and see just what this relic of gaming’s past brings to the present.

Sakura Wars is a game of peculiar mind. Subscribing to a design philosophy born in Sega Saturn days, its priorities are not the ones trending in contemporary development circles. Its to-do list did not include “moral dilemmas”, “big choices” (though there are many to be made), or “visceral combat” (“flamboyant” or “silly” would be more apropos). It’s in no way “mature”, though it goes places most other games do not. It might be old-school, but to many, it’s practically unprecedented.

You don’t need me to tell you that, though. That much is obvious from the get-go. Dressed in the Dapper Dan vest of Japanese ensign Shinjiro Taiga, you’re inexplicably assigned to lead the New York Combat Revue, a secret organization dedicated to defending the city of cities from hell-spawned demons bent on world domination.

This ensign’s New York, though, is not the one you know from real true history. Instead, it’s a hilariously sanitized, adorably naive near-parody. It’s 1928, and the world runs on steam. Brass pipes and whining gauges adorn steam-powered cars, steam-powered airships, and steam-powered computers, watches, cameras and radios. Don’t be mistaken, though. This isn’t steampunk, for there is no “punk” to be found in Sakura Wars‘ world. Hell, even bank robbers carry sacks of cash with giant dollar signs on them. Dollar signs.

The cast especially reflects the game’s grime-free attitude. The Revue is no elite squad of grim Steam Marines, all brooding and resolute. This troop is more a “troupe”, cream of the Big Apple’s acting scene, divas of Broadway song and stage. That they pilot Super Telekinetic Assault Robots (STARs) in the name of love, justice and freedom is just stuff for the theater pamphlet. 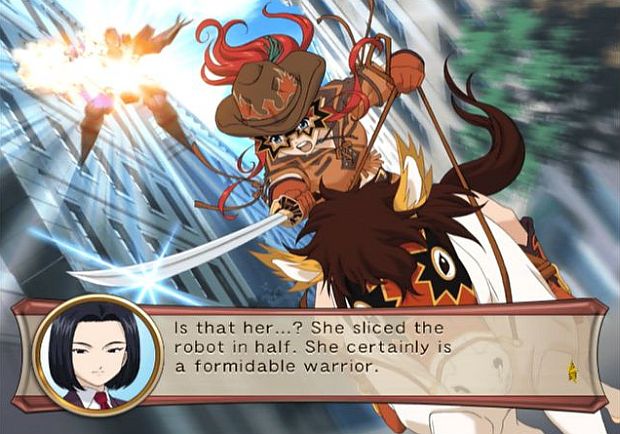 But that’s just the setting. Sakura Wars isn’t about building worlds, but building relationships with those around you. It just so happens that most everyone around you happens to be a pretty anime girl.

Being, of course, a happy-go-lucky, intensely “anime” game, the characters’ backgrounds are appropriately mad, catering to any fan’s romantic fancy. Seeking love from a firebrand lawyer-cum-actress-cum-mecha-pilot? Cheiron Archer’s the woman for you. Or perhaps you’ve a taste for an androgynous Noh dancer who refers to herself in the third person? That’s Subaru Kujou. Maybe a Texan cowgirl trained in the samurai arts, who might be moonlighting as a mysterious masked vigilante? Gemini Sunrise is your heroine.

Now, you might be thinking that what I’ve described sounds a lot like a “dating sim”. You’d be half-right. Dating and romance might be on Sakura Wars‘ mind, but the actual content is nowhere near as creepy as most of the other titles that would be considered part of the “dating sim” genre. Though rife with mild innuendo and occasionally giving Shinjiro the chance to act the lech, the game’s love affairs barely break into PG-13 territory, played more to elicit laughs and feel-good warmth than to make shut-ins feel less lonely. It also neatly sidesteps the potentially dangerous relationship with a pre-teen Mexican bounty hunter, portraying it as more fraternal than romantic. NIS-America provides an excellent localization, capturing the game’s abundance of personality and delivering some genuinely comedic moments. PS2 players also gain the benefit of a second disc containing the original Japanese voice overs, though the English dub easily matches it in quality. Wii owners with a tolerance for cheesy voice acting won’t miss out too much, and voices can also be switched off. 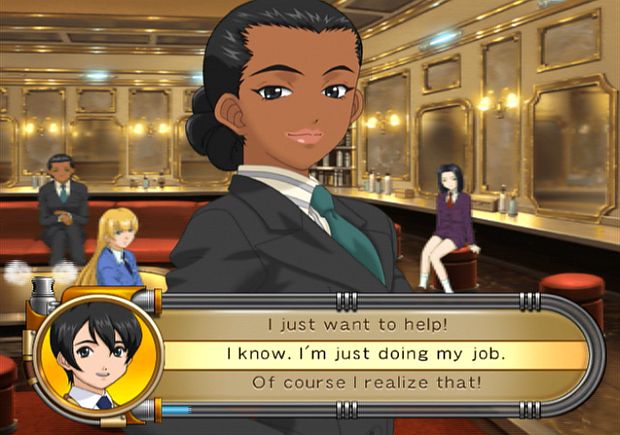 To build up to those genuine laughs and energetic romances, you’ll have to do a lot of talking, reading reams of dialog and making conversation choices via the game’s LIPS system. LIPS takes the dialog tree several steps further, placing your choices on a timer (ala Alpha Protocol, though Sakura Wars did it first) wherein even letting the clock run out counts as a response. Answers can change midway through, even. If left waiting too long, an imperative order might change to a meek suggestion. Some LIPS interactions even resemble quick time events, having you match prompts to show off your mad skills. Successful choices trigger an upbeat jingle to signal your friends’ approval. Just like in real life!

Talking the talk is supplemented by walking the walk, as you’ll explore New York’s various neighborhoods, seeking opportunities to mack it up with the cast, and adding a mild time management aspect to the proceedings, as not everyone is available at all times. Ultimately, appealing to the girl of your choice determines the game’s ending, which encourages repeated playthroughs.

Fans of visceral combat (well, “combat”, at least) aren’t left completely in the cold. The game’s other foot stands squarely in the turn-based tactical genre. Punctuating each chapter are big battles against evil forces, with the Revue piloting squat, colorful steam-powered mecha. Movement and actions are governed by expendable action points, with defense, healing and attacks costing different amounts. Players familiar with Valkyria Chronicles‘ BLiTZ system will see its roots in this game. Characters come with unique combos and skills, as well as flashy, floridly named special attacks, complete with anime mini-cutscenes and a lot of shouting. And when the bosses arrive, the Revue takes to the sky, transforming their STARs into high-speed jet fighters to do battle in the air. That said, the battles unfold in the same way, with missiles replacing melee attacks.

Combat isn’t entirely separate from relationship-building, though. Happy characters gain stat bonuses for that chapter’s battle, and Shinjiro can garner some goodwill by taking hits for the team. Friendships also improve the likelihood of combo attacks occurring, as well as unlocking super-special ultimate techniques involving both you and your chosen soulmate. 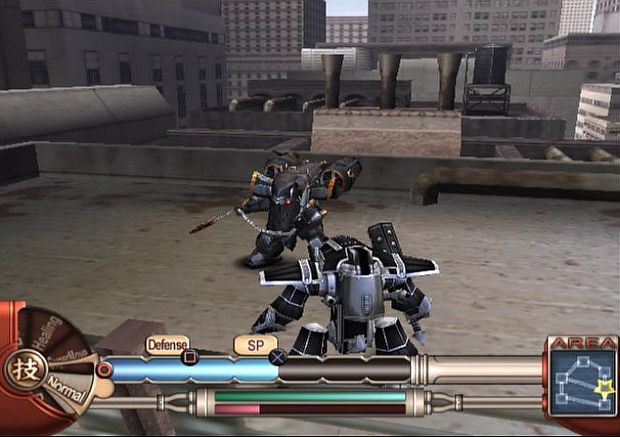 Unfortunately, Sakura Wars is not all fun and games. Fresh and new as its core experience is, technical shortcomings betray the title’s age. It’s most evident during battle. While hidden somewhat behind colorful effects and a stylish interface, flat textures and low polygon counts confirm that this is indeed a mid-generation PS2 game. Some newer PSP games can boast more accomplished visuals, in fact. Most of your time will be spent, however, staring at slightly animated character cutouts on static backgrounds. Put simply, this isn’t the game you point to to demonstrate the power of the PlayStation 2.

The battle mechanics don’t quite stand up on their own either. Devoid of an actual character progression system, combat ultimately feels shallow and unchallenging compared to more dedicated tactical efforts. And for every hour spent fighting, two hours will be spent talking and participating in anime antics.

Which, of course, leads to the most critical point. Your enjoyment of Sakura Wars depends almost entirely on your ability to tolerate anime fluff. While thankfully light on angst and melodrama, the game is nonetheless filled with saccharine sentiment and excited, high-pitched babble. If you hate anime, or have ever passed on any title for being “too Japanese”, this isn’t the game for you.

Sakura Wars is a game apart. It is a niche game within a niche genre, and is quite proud of it. The open-minded and unafraid will find a cheerful experience that is happily free of more contemporary obsessions with maturity and grit, content to be silly, fluffy, quirky and madly “anime”.