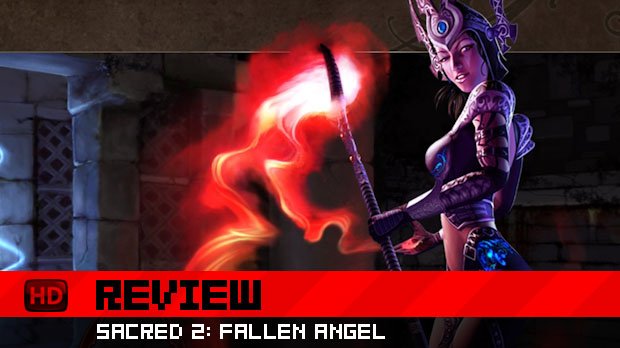 It’s been a long time since a home console saw a true-blue Diablo-style RPG. While there have been plenty of Japanese RPGs, and Western open-world role-players such as the Elder Scrolls games, a most particular blend of top-down, grind-heavy, loot-driven gaming hasn’t been seen in a long time. The only thing that came close was Too Human and, well, we all saw how that went.

This is a huge reason why Sacred 2: Fallen Angel feels like such a breath of fresh air on the home console. The game is glitchy, buggy, and a technical mess in more than a few areas, yet its wit, charm, and the simple fact that nothing quite like it can be yet found on an Xbox 360 or PlayStation 3 have helped to make a game that is intensely enjoyable, despite its problems.

We already have a review of the PC version, but Brad Nicholson and I went through the Xbox 360 version of the game to check out how well the traditional grinder has made the transition from computer to console. Join us then, as we review Sacred 2: Fallen Angel. 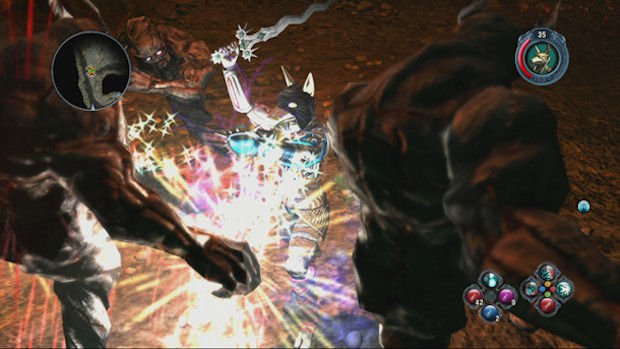 Fallen Angel takes place 2,000 years before the original Sacred, so no prior experience is necessary to get into things. That said, the story itself is pretty light and often nonsensical, likely due to bad localization, so it wouldn’t have mattered anyway. The game’s plot revolves around a magical power source called T-Energy, which was exploited by Elves until it started mutating the world of Ancaria. Choosing one of six character classes, players will be able to shape the destiny of Ancaria, either saving it from the grip of T-Energy or driving it deeper into darkness.

The game’s introduction looks and sounds exactly like the opening to a mid-nineties Saturday morning cartoon, and this atmosphere is carried into the game as well. While you’d almost be forgiven to think the story was trying to be serious — and sometimes, it even attempts to be — there are so many sarcastic one-liners and fourth-wall-breaking comments that it’s impossible to tell what the game’s writers were actually going for. The whole thing comes off almost like a parody of RPG games, with player characters commenting on the ridiculousness of their quests, gravestones containing in-jokes and pop culture references, and NPCs frequently abusing you for no reason whatsoever.

It’s lucky the game has a sense of humor, because with so many glitches and bugs, you need a laugh. It’s safe to say that Sacred 2 is incredibly broken, and it doesn’t seem like the delay between the PC and console versions has done anything to fix things. Characters frequently get stuck in scenery, the graphics stutter and choke at various points, and sometimes commands and skills just won’t work at all. My Inquisitor character often just stops moving, and will only walk again if I remove his equipped weapon and re-equip it. This is just one of many faults to be found within the game. 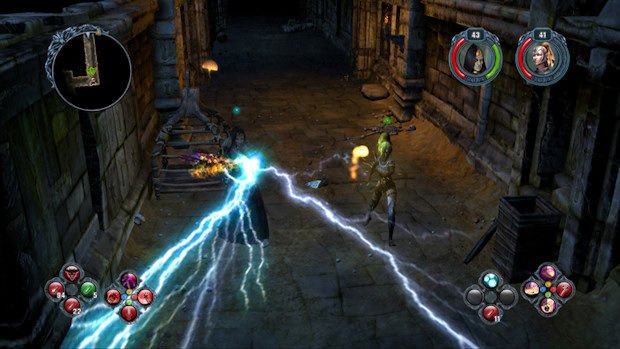 However, despite the fact that this RPG seems crudely stitched together with old string, Sacred 2 never stops being fun, and this is where the title somehow manages to rise above its own problems and become a “so bad it’s good” type of title. The fact that the game is confused, buggy and nonsensical becomes surprisingly charming, and all part of the joke. Never did the problems become so overwhelming that I wanted to turn it off, and nothing so far has stopped me from becoming intensely addicted to the experience.

The gameplay, when it works, is based on the classic “acquisition of power” train of thought. While the combat itself is simple, the pull of grinding to achieve new levels, loot and skills is impossible to resist. The actual story of the game can go hang, because it’s far more important that players find a new helmet or broadsword. Thanks to the silly catchphrases spewed by characters and enemies, grinding never feels like a chore, and the equipment can be found looks so striking and often ridiculous that it’s fun to uncover new armor and deck out one’s Shadow Warrior or Temple Guardian.

Fallen Angel deserves praise for making the controls intuitive and simple, something that PC RPGs often fail to do when making the transition to console. Players can select actions by pressing the face buttons, with the shoulder buttons used to select yet more actions for the same buttons. It’s simple, but it gives players access to their full range of spells and abilities with a few easy button presses. 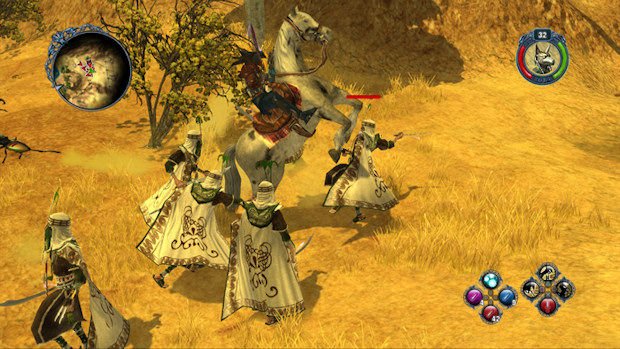 Each character class has access to its own special powers known as Combat Arts, with varying effects and degrees of usefulness. The Inquisitor can perform some powerful strikes and raise the souls of the dead, or even create doppelgangers of himself that he can possess if he dies. However, he also gets some rather useless skills, like lightning that does very little damage. Characters can choose to follow one of six Gods, each of which brings a powerful Divine Gift. In addition to this, there is the usual amount of RPG tweaking, with players able to designate skill points and improve various “Lores” earned throughout the game.

It should also be noted that Sacred 2 is absolutely huge. The world map is massive, full of varied and unique locations, from grand Elven cities to murky, undead-infested swamps. Characters can choose between a Light and Shadow campaign, both of which will take a fair few hours to complete, and ever single character class has its own lengthy unique quest. As well as these, there are hundreds of optional sidequests to complete in the name of experience points and gold. While they mostly consist of running to one area, killing things, and running back, there sheer volume of content cannot be underestimated. I’m still slogging through the shadow campaign and I kind of don’t want it to end. A dedicated Sacred 2 fan could be playing for the rest of his life. 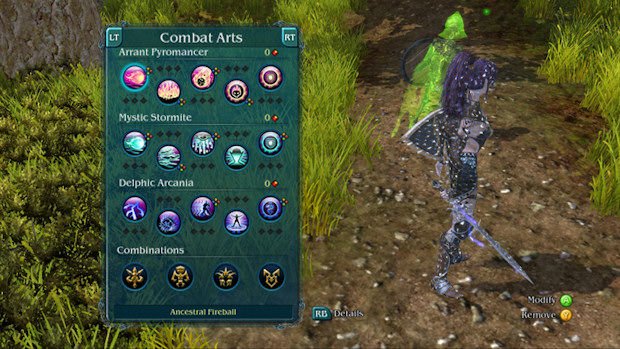 The game looks pretty good, with some beautiful locations and great character designs — especially for enemies and the unique mounts that each class can unlock. It’s a shame that the framerate can stutter because otherwise this is quite a graphically beautiful game, and it’s always great to see bright colors and dazzling environments on a current-gen console. The music is pretty great too, even if the theme tune is written by Blind Guardian and the NPCs sometimes sing the song’s lyrics to themselves for maximum embarrassment. The voice acting is bad, but like everything else, that sort of makes it good.

Sacred 2: Fallen Angel is, by most counts, a really bad game. However, for such a technical disaster, I have been playing it solidly for a week since I got the thing. It’s a technical mess and its flaws are impossible to ignore, but its sheer character and the strength of some incredibly addictive gameplay have allowed it to surpass all its problems and become a truly fun game. This is most definitely a “despite all its flaws” kind of game, the very best example of one you could hope to find. It helps that there’s nothing quite like it on current-gen consoles. 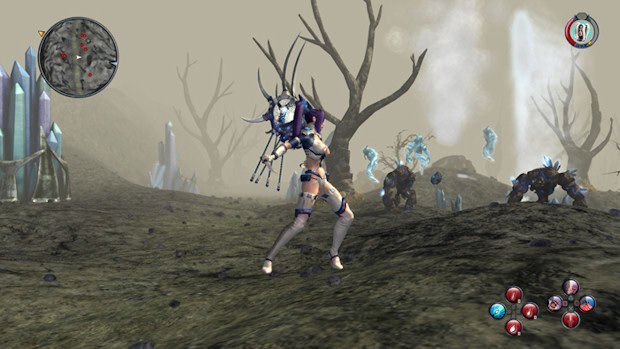 Sacred 2 is an odd bird. Pointless quests and chatter hold together its wretched, shoestring story (something about doing something with ancient poppycock in order to accomplish, uh, something). Mundane and uninviting environments void of character dot its massive landscape. The console-sensitive battle system fails to be interesting, if not wholly dismissive of its own plethora of attack options. And your character, the one you shape, never quite feels like your own creation; you’re a prisoner to random drops and a woeful lack of customization options.

But there I sat, at 2 AM, playing Sacred 2 for the sixth hour straight, mindlessly tapping buttons, and watching the experience meter grow. Somehow excited about the prospect of applying new attributes. And oh, if only I was given the option to pick a new skill! The possibilities, I thought, were endless.

I still can’t deny the game’s magic — that slippery mixture of item hoarding, collecting, brandishing, slashing, and hacking. As dumb as the game is and as poor as the vast majority of its components are, I still found myself playing for copious amounts of time and being completely negligent of duties that needed to be performed outside of the game. 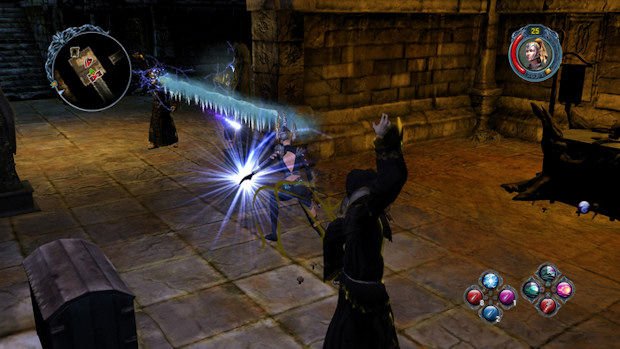 I like Jim’s frame of reference, that Sacred 2 is a “despite its faults” kind of game. If you have the drive and mettle to treasure hunt, loot, minimally explore and level characters, then you’re going to dig Sacred 2 despite its sloppiness.

Alas, I can’t comment on the majority of the game. When I received my review copy, it came with a caveat, one that I’m transferring to you. Apparently, there was some sort of mix-up and I may have received a bad master copy of the game, which means that I can’t evaluate this product in full.

I won’t be mentioning the cooperative mode, visual quality, and overall stability of the game. I can’t score it either, considering the amount of stuff I shouldn’t write about. The good news is that Jim has already done all of that and more in his portion of this review. Right on, chap.

Considering the restrictions I’ve put upon myself, there’s not much I can talk about beyond the abysmal story, boring world and perhaps too simplistic battle system. Instead, I’ll write briefly about how I felt during my time with the game.

Which I can sum up in one word: excited. 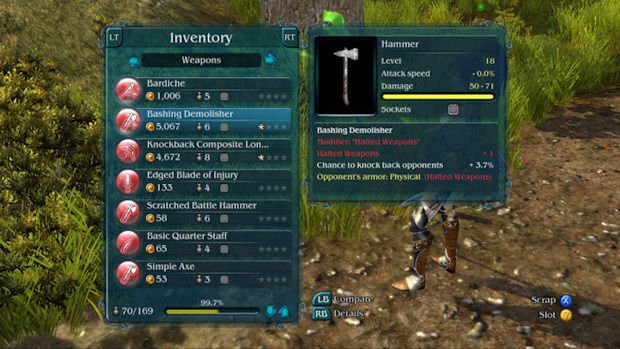 There was only one section in my twenty-five or so hours of play where the game threatened to be dull. It was during a particularly long crawl through a massive and complex cavern. After a few hours trapped within the rocky tunnels, the enemies — there aren’t many models in the game to begin with — became too familiar, and the endless backtracking (as a result of the poor mini-map) threatened to steal the excitement I had for game’s bread and butter: grinding and looting.

But even in that moment, where I began to believe the game had lost its gas and momentarily saw Sacred 2 for what it was (a senseless hack n’ slash game) I wanted to keep playing. I wanted to get that next level up. One that could propel my Shadow Warrior’s skills beyond the AI surrounding me — to rip them all to shreds and emerge out of the caves ultimately victorious.

And I did. Then, I kept playing, kept pushing. And kept being excited about what I was doing. 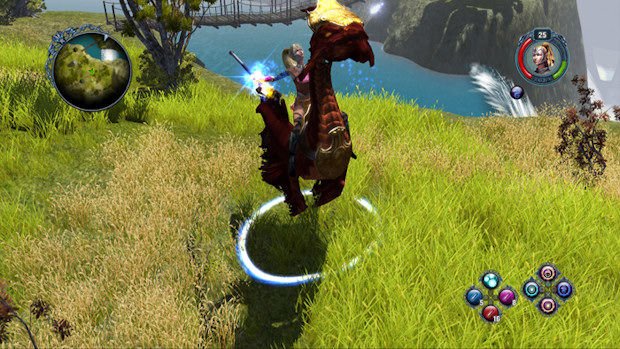 Sacred 2 is an odd bird indeed. Nearly every second I played, my brain screamed that everything is wrong; I shouldn’t be enjoying the dull and drab mess. But I would keep going, fixated on picking up broadswords, gloves and boring trinkets that I could forge into weapons and replace within an hour.

Simply put, there’s nothing like Sacred 2 on the PlayStation 3 and Xbox 360. It’s a hack-n’-slash game with what I believe to be the right stuff — a delicious mix of grinding, looting, and rewards.

Final Score: 7.5 — Good (7s are solid games that definitely have an audience. Might lack replay value, could be too short or there are some hard-to-ignore faults, but the experience is fun.)