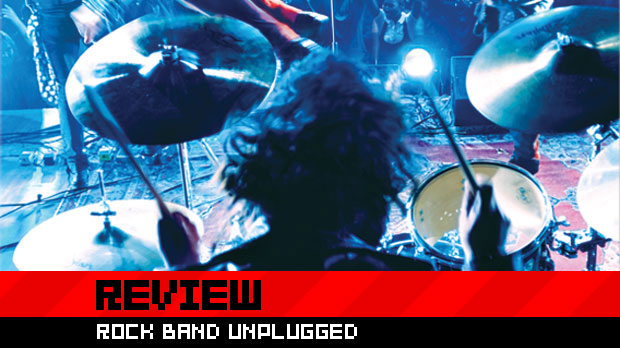 For the life of me, I’ll never understand why Harmonix’s Frequency and Amplitude weren’t commercial hits. The titles featured a solid and fun beat-matching mechanic, and were both well-received by critics. Maybe it was mix of poor marketing, an unrecognizable IP, and the fact that one of the first songs you played in Amplitude was a remix of a track by P.O.D., a Christian alternative metal band.

With Rock Band Unplugged, Harmonix has most of that stuff in the bag – killer marketing backed by a highly-successful IP, and 100% less P.O.D.. At first glance, Unplugged looks like its console older siblings, sharing everything from menu to character assets, along with the signature note highways. But what it’s lacking is physical instrument peripherals, fortunately stripped away for the portable experience, leaving you with what’s basically a hard rock version of good ol’ Amplitude.

But is it any fun?

Although the finger/brain communication needed to be successful with Unplugged takes a bit to warm up to, the basics work well on the PlayStation Portable. Instead of focusing on one instrument as with the console games, Unplugged has you accountable for four — bass, drums, vocals, and guitar. By pressing a combination of the d-pad and face buttons that map to the gems on the note highway, you’re required to complete note phrases for each instrument. Once complete, that particular highway disappears, the instrument will “auto-play,” and you’ll use the left and right triggers to navigate to another track.

In this way, you keep the song going, acting as a one-person band. Missing a phrase will cause the track to drop out of the mix entirely, and a meter on the left side of the screen will continue to fall until that track “fails out.” Activating your Overdrive — energy earned by hitting pre-determined notes and phrases — will allow you to bring any failed out instrument back into play up to three times before your ass gets booed off of the stage. Unlike the console titles, shaking or tilting the PSP won’t do anything; Overdrive is activated by simply hitting “X” (using the game’s default controls).

If it sounds a lot like traditional Rock Band it pretty much is. The game’s visuals are modeled directly off what we’ve seen in Rock Band 2, with everything from the HUD to the menus remaining largely the same. Play-wise it’s a tight, rewarding experience, with the note charts being based off beat matching, as opposed to how the console titles attempt to mimic the feel of playing an actual instrument. This works across most instruments, with the more difficult levels requiring some skilled finger gymnastics to nail the trickier phrases. 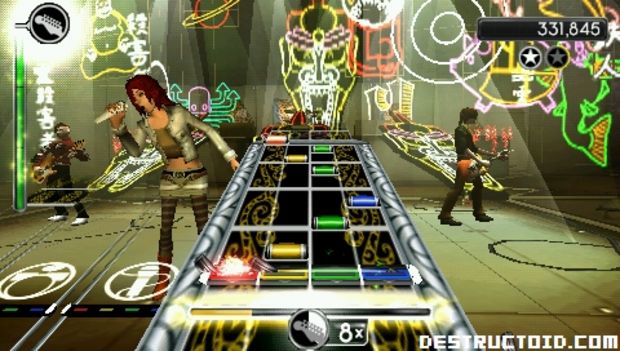 Regrettably, the vocals consistently remain the easiest charts (even on Expert skill levels), which leads to some odd instrument balancing issues. As the difficulty increases, the game interestingly introduces two or three note “chords” for vocal sections with harmonies, but the difficultly pales in comparison to some of Unplugged’s more complicated guitar riffs or drum fills. While sometimes the vocals can get tricky, they never get truly reach what feels like an “Expert” level. This is less a fault of the game, however, and more the nature of the singing; singing on pitch is an entirely different (and arguably more difficult) skill than matching rhythm and phrasing. It’s not a huge issue, as all of the other instruments will tend to throw enough at you to keep you on your toes.

Rock Band Unplugged ships with 41 on-disc tracks, which pales in comparison to the number of songs that ship on the Rock Band 2 disc, and the potential number of playable tracks you may possibly have on your console-of-choice’s hard drive. Of the 41 tracks, the majority are songs previously available on the Rock Band/Rock Band 2 discs, or via downloadable content. While it’s nice to have some new tracks thrown into the mix (The Jackson 5’s “ABC” is a particularly nice surprise), long-time Rock Band players will likely have heard the other tracks countless times before even popping Unplugged into their PSP.

Given that, the game’s single-player World Tour (which mirror’s closely that of Rock Band 2) can start to get stale quicker than you’d like. With only a small selection of tracks (most of which aren’t immediately unlocked), you’re bound to play the same songs over. And over. The game features an in-game store to download more tracks, a handful of which are already available for a price. The capability to expand your music library is nice, but its pricing may be a hard pill to swallow for some.

The good news is that playing the tracks is fun, and concentrating to keep your streaks and multipliers going can be a bit of a challenge. While surviving even the most difficult of songs isn’t really an astounding feat, actually scoring well and hitting that five (or gold) star mark is. Whereas Rock Band on the consoles is a typically social experience (I’ve been to one party in the past four years that hasn’t prominently featured Rock Band, and it was an Activision event), Unplugged is you against the software. There are no multiplayer modes at all, and it’s a bit disappointing that the game doesn’t feature some sort of online leaderboard to keep things competitive. 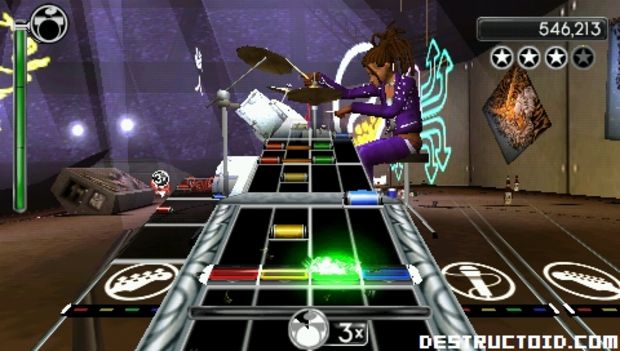 Rock Band Unplugged also features two extra modes outside of traditional track switching play — “Band Survival” and “Warmup Mode.” The latter allows you to pick the instrument of your choice to play throughout the song, which is a neat option, but a bit of a lie; if you choose to play drums and the song features a guitar solo, you’ll be forced to play it anyhow.

“Band Survival” is a tricky game mode that has you playing all of the instruments at once. While it sounds similar to regular play, there’s a bit of a catch – there are no phrases to complete that will “auto play” that particular instrument when completed. You simply have to jump from track to track to keep every instrument alive; ignoring any instrument will lead to failure. It’s certainly trickier than standard play, and while it sounds impossible, it’s not. In fact, it’s in many ways more fun and interesting to juggle the tracks in “Band Survival” than it is to play the standard game. Because the on-disc tracks can begin to repeat themselves early and often, throwing in a few different styles of play into the World Tour mode (like “Band Survival”) might have helped to keep things fresh.

Over the two weeks I played the game for review, I had a rocky relationship with Rock Band Unplugged. The first few days was marked by joy that I could play one of my favorite games, Rock Band, on the toilet. The game mechanic, plucked from one of my favorite non-peripheral music games, Amplitude, was put to good use on the PSP. But then we hit a rough patch, one in which I had completed all of the tracks to be heard on the disc, and wasn’t sure I could stand to hear Weezer’s “Buddy Holly” one more time. 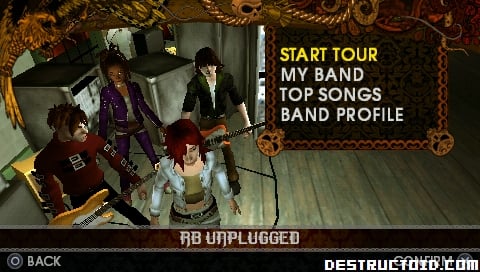 Then something happening on no less than two five-hour-plus plane rides — I played Rock Band Unplugged the entire time, intent on nailing each phrase, maximizing my scores, and maybe even getting a few gold stars. Despite the shortage of on-disc content, simply playing each track is a pleasure, and it’s a way to experience music on the go in a way previously unseen (or unheard) on the PSP. Provided the music library expands significantly via DLC, the interactive Unplugged could easily replace your iPod or other mp3 player on road trips and commutes.

Even with downloadable content, it’s hard to compete with the staying power of the console versions, mainly because it removes a group from the equation. But as a casual pick-up and play, on-the-go music experience, Rock Band Unplugged certainly delivers a fun experience, certainly worthy of a look.