Gaming peripherals, on the whole, can be pretty dang expensive. If it isn’t a £150 keyboard, it’s a £200 pair of headphones, or maybe even an £800 VR headset. Add all the different bits-and-bobs you need together, and PC gaming turns into a very expensive prospect even before you’ve bought the PC itself.

Thankfully, most manufacturers tend to have a few lower-cost items in their ranges to compensate for this. At about £30, the Roccat Kiro ambidextrous gaming mouse falls firmly into that market. Unfortunately, even at the relatively low price, it’s still incredibly hard for me to recommend. 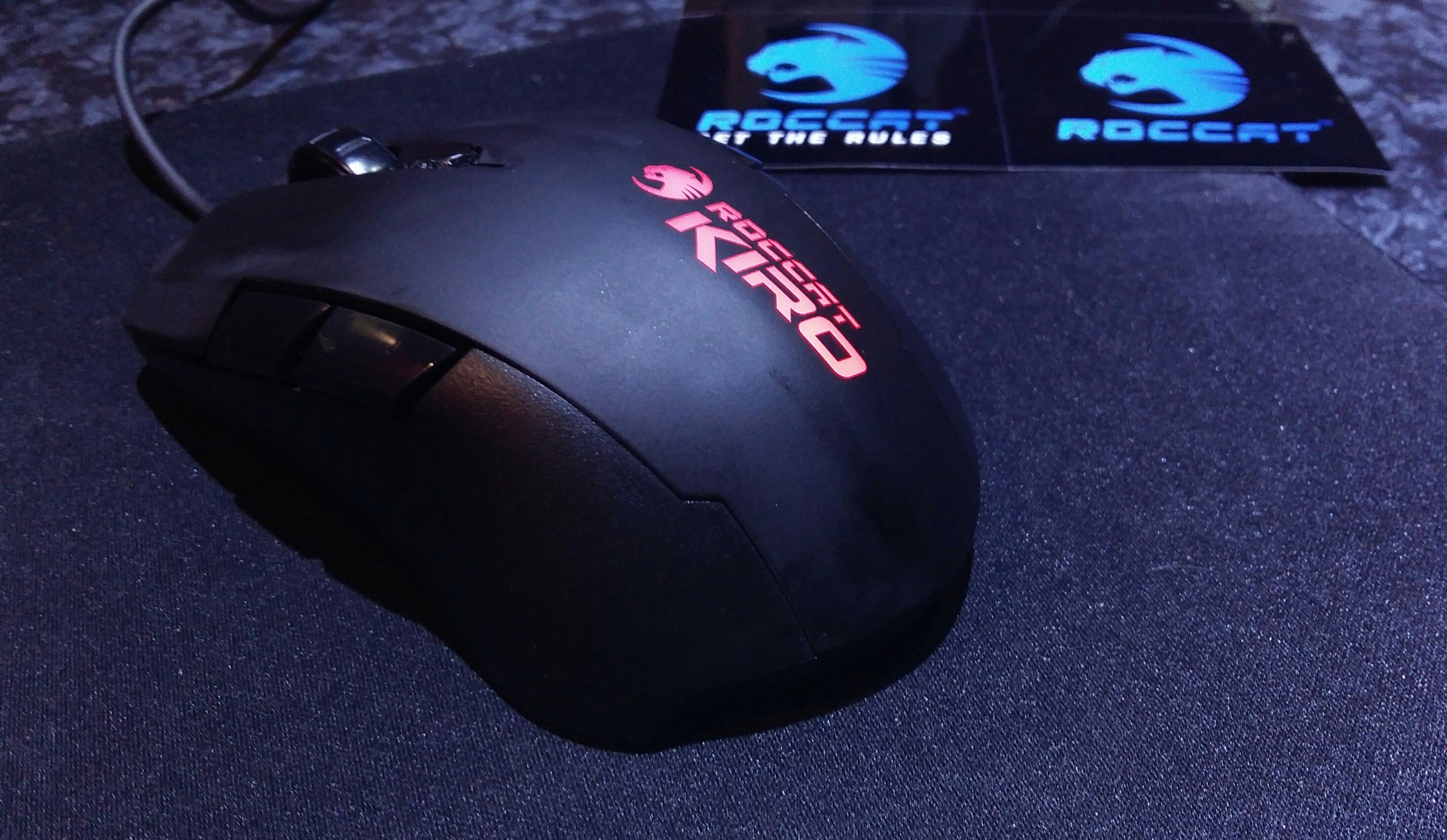 While the build quality of the Kiro is by no means the worst I’ve ever seen for a mouse, it’s also not particularly impressive.

On the plus side, the material the shell is made out of is nice. It feels like a half-way point between plastic and rubber that is both comfortable to hold and prevents sweaty palms. The programmable RGB lighting (because this is 2016, and every device has to have RGB lights somewhere) is bright and vibrant, too. The Kiro definitely looks the part of a gaming mouse, I will give it that.

Unfortunately, those good points don’t make up for the Kiro stumbling where it matters most. It’s a somehow light-feeling mouse despite weighing a pretty standard 103 grams, the cable is flimsy and unbraided, and it has some of the worst, glossy plastic feet I’ve ever seen. These three problems all come together to mean that when not being held, for example when going to type something, the cable can actually push the mouse around depending on your setup, resulting in some major cursor drift. 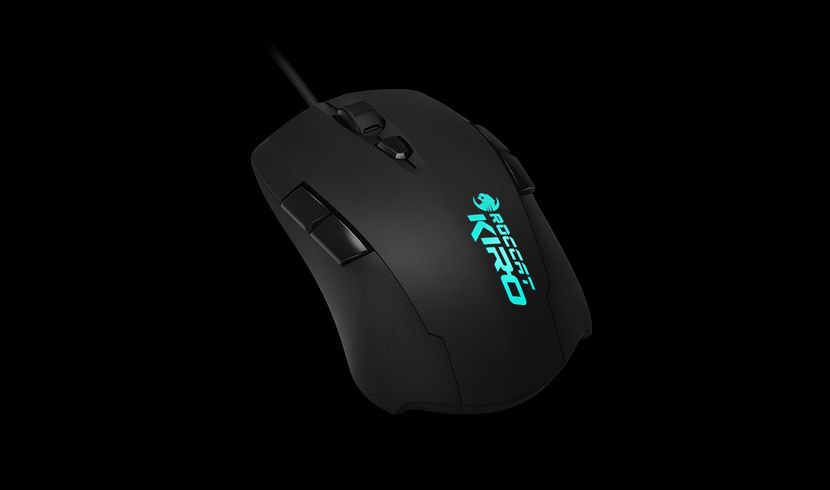 The form of the Kiro takes some getting used to. I’ve been testing it for about a week now, and it took three days for my hand to stop cramping while playing fast-paced games. It’s a bit on the small side (12.6cm long), which means people with bigger hands may find their fingers often poke out over the top of the buttons when using a standard palm grip. I tend to use a palm/claw hybrid grip, which works better, but it still feels small to me.

The on-the-fly DPI switch is placed underneath the scroll-wheel, which normally wouldn’t be a problem, except the button is so gosh-darn sensitive. My wide (read: chubby) fingers tend to accidentally hit the switch, sending the mouse’s sensitivity haywire. In a game like Devil Daggers, that is easily one of the fastest ways to die. 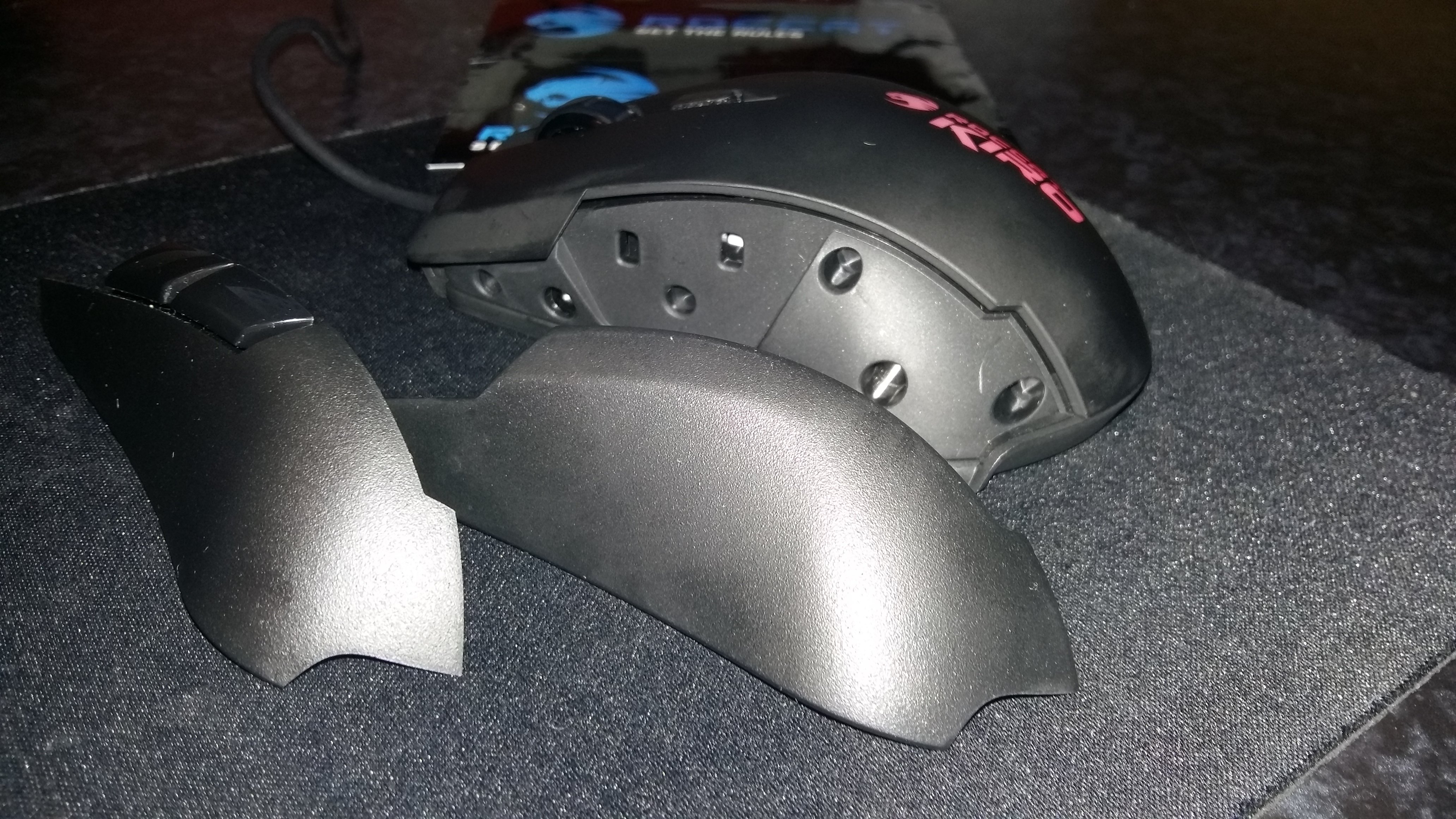 One of the neater features of the Kiro is the modular flanks. Each flank has two decent macro buttons, but if you don’t like them, you can pop them off to be replaced with included, button-less alternatives.

Roccat advertises this as letting you make the mouse left- or right-handed, but the different sides don’t actually change the form of the mouse in any meaningful way. It’s still an ambidextrous mouse with removable buttons, no matter how you configure it.

The sensitivity of the Kiro can be a problem. While the sensor offers up to 8200 DPI and a 1000Hz max polling rate, I’ve noticed a lot of weird glitches. Trying to click very specific sections of the screen (such as when highlighting text) can be difficult as the cursor sometimes either jumps all over the place or doesn’t want to move at all.

This is where those damn feet get in the way again, as they massively reduce the device’s accuracy on top of the already present glitches. The feet provide absolutely no grip, so virtually any pressure put on the mouse can make it slide around both on my fabric gaming mousepad and my glossy desk surface. Games that require careful and deliberate aiming are an absolute nightmare, as even just the act of clicking can frequently shift the mouse off-target. 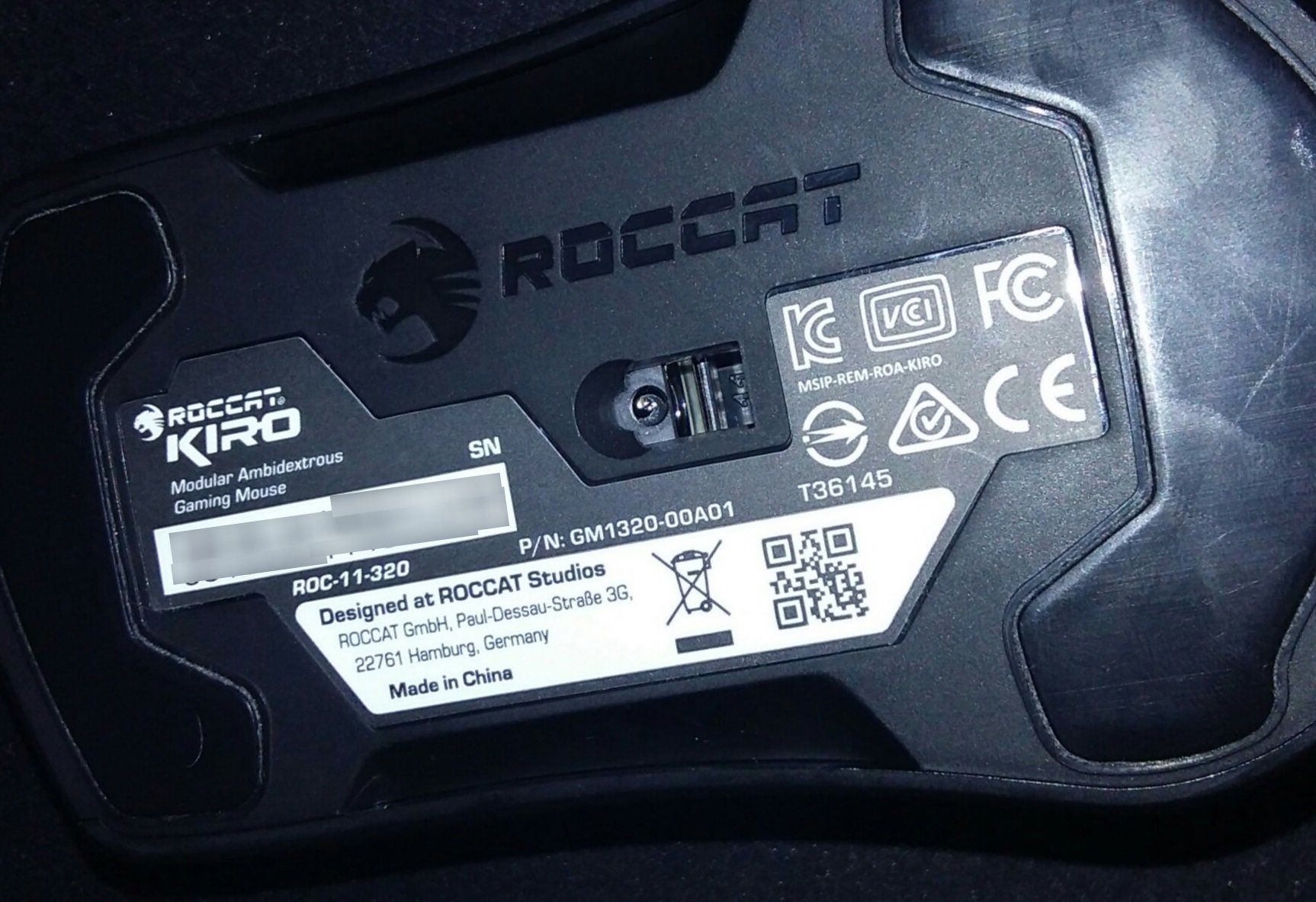 My final problem with the Kiro is one I also raised with both the Nyth and Ryos: Swarm. Swarm is the configuration program required to rebind the macro buttons, set DPI stages, and choose the RGB lighting, but actually getting it to work can be incredibly hit-and-miss. I had to completely remove and reinstall Swarm when plugging in the Kiro (much like I did when plugging in the Nyth previously), and even then it took a few software restarts before Swarm would detect the mouse even existed.

Once the Kiro was picked up by Swarm, settings would sometimes decide to not save, which makes trying to configure a gaming mouse with a lot of macro buttons awkward at best, and frustrating at worst.

I hate to say it, but I’m really disappointed with the Kiro. The previous Roccat equipment I’ve reviewed has been great (I’m even typing this up on a Roccat keyboard). But the Kiro’s major design flaws make it a frustrating, unpleasant mouse to use. For this price, there are definitely much better choices you could be making.