We’re going to take a closer look at the ROCCAT Isku today. With a backlit keyboard, built-in wrist rest, tons of customization, and awesome software, what’s not to love?

For some added context, I will be comparing the Isku with another keyboard I reviewed for Destructoid, the Razer BlackWidow. While there are differences between the two — the Isku isn’t mechanical, for starters — it’s always nice to have something else to relate to. Also, the price of the BlackWidow Ultimate edition is very close.

Anyway, getting on to the review! The ROCCAT Isku comes fully stocked with tons of settings — probably more than you will ever end up using, in fact — and stacks up so many little things that makes this an awesome keyboard. Glossing a bit over the specs (I’ll go into more detail on each later), the Isku comes with blue backlighting, Easy Shift[+], 36 macro keys, on-the-fly macro recording, media keys, and a built-in wrist rest. 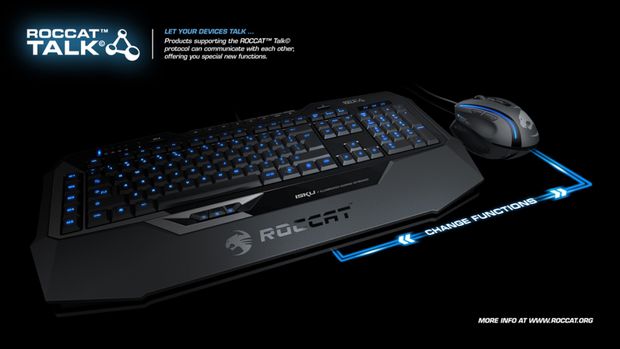 In case you didn’t read my review on the Razer BlackWidow, I opted against getting the Ultimate version of the keyboard and missed out on the backlighting it offered, so when I got the Isku, I became quickly addicted to the nice glow and how easy it was to glance down at my keyboard and see what I was looking for immediately. I had previously looked at backlit keys as a waste of money, but I can totally understand why people enjoy them so much.

In addition to this, the Isku has six levels of illumination to choose from — including one that has no lighting at all — which is pretty sweet. I especially like that I can set the illumination to dim or turn off after a set amount of inactivity, since I keep my computer on at night. 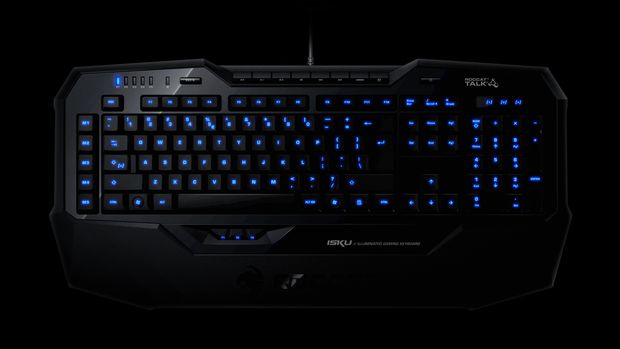 The illumination does have some setbacks. I tend to sit pretty low in my chair sometimes, so I don’t have a direct angle on the keyboard (probably a 45 degree angle to the table) and it cuts the key illumination off at the top. I know this is just from the lights for the keys being lower in the keyboard, but it’s a bit of a bummer that the only time I can see the entire key is when I’m looking directly on to it. Additionally, the illumination key (the key you use to change light levels) and the macro recording button don’t light up and there’s no real way to tell which lighting level you are on quickly.

This creates a problem when you’re trying to change it from level five to level three (the button only makes it go up), since you have to count how many times you press the button or end up passing it and having to keep going back through the levels. In an ideal world, the illumination key would light bars up to show which level the keyboard was at at any given time. This is more of a nitpick; all in all, the keys make the keyboard look sleek and sharp while allowing for easy key viewing.

Easy Shift[+] is more or less a function on the keyboard that doubles the uses of each key in the Easy Shift Zone. Pretty much when you press the Easy Shift key (they replaced the caps lock key), it changes all the functions of the keys in the three zones to another preset function. Cool idea in theory, right? It works pretty well, but I always forget to use it! This may not be a problem for all of you guys, but it ended up being a feature that sadly went unused in much of my gameplay. 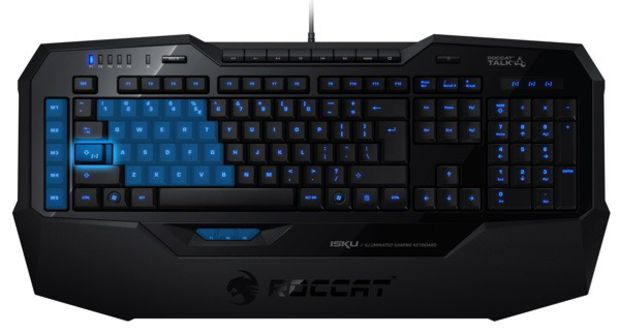 ROCCAT split the buttons that are Easy Shift compatible into three “zones.” The first of these being the set of five macro-dedicated keys on the left, the second zone consists of the three “Thumbster” keys on the bottom, and the third and largest containing much of the left side of the keyboard, as shown above.

It’s a good function if you can learn to use it, and even better if you are able to use ROCCAT Talk, but I’ll cover more about that in my upcoming ROCCAT Kone[+] review.

The thing that I think really would have made this keyboard perfect would be mechanical keys, but they aren’t there! Instead, you’re stuck with your dome key, which is a little disappointing after you’re used to using a mechanical keyboard (in my case, the BlackWidow). Either way, the keys are still fairly high quality in that I haven’t had any issues with the keys sticking, popping off, or malfunctioning in any way. Had the keys been mechanical and still had all the features the Isku already has, I would have cried and never used another keyboard again.

The little things matter the most

The best thing about this keyboard are the small features, and it’s those small things that I curse every time I have to game on another keyboard than my Isku. The first being the built-in wrist rest; I hadn’t previously used one on my BlackWidow, and thought it would just get in the way when I typed. This didn’t turn out to be the case — although it adds a bit of space to the keyboard, it’s not intrusive, is pretty comfortable, and in general nice to have so my hands aren’t scraping up against the shiny plastic bits like they were with the BlackWidow. 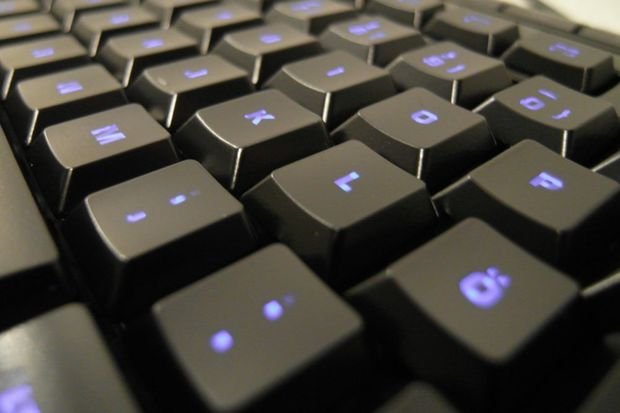 Speaking of comparing with the BlackWidow, a big problem (at least for me) was that the shiny plastic covering on the BlackWidow was was incredibly easy to leave finger prints on. So after a good big of gaming, the bottom of the keyboard would have a ton of prints on it from my wrists and looks pretty messy; with the Isku, that’s not a problem because of the wrist guard.

Moving onto the feature I enjoy the most about this keyboard: the raised bump on the W key. Yes, I know this is a small thing and can probably be found on other keyboards, but it is a difference that I think really makes gaming easier, especially when you’re switching between typing and a WASD finger position.

The driver software is top notch

A lot of gaming keyboards are often brought down by their software, whether it’s hard to use or simply not very useful. The Isku driver does not have this problem. Even from a glance, you can tell that the software has plenty of functions but is also pretty straightforward to use.

The Main Control tab houses the functions for the five macro and thumbster keys along with their respective Easy Shift functions. To change the function of a key or Easy Shift key, all you have to do is use the drop down menu to either create your own macro or use one of the preset macros. You can pretty much do anything in these macros, as to be expected with a high-quality keyboard, so you can open programs and such along with your basic key combination functionality. 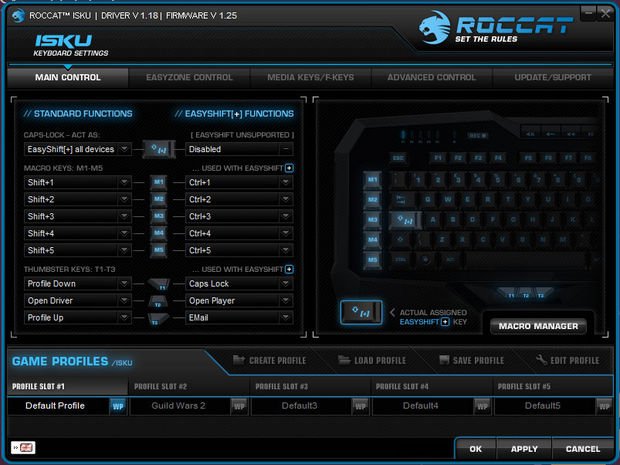 Moving onto the EasyZone Control panel, it’s essentially the same thing as the Main Control, except it focuses on the main part of the keyboard. In case you can’t see the picture, connect the dots with me; the EasyZone starts at the 1 key, goes to 5, down to B, over to Z, and back up to 1. 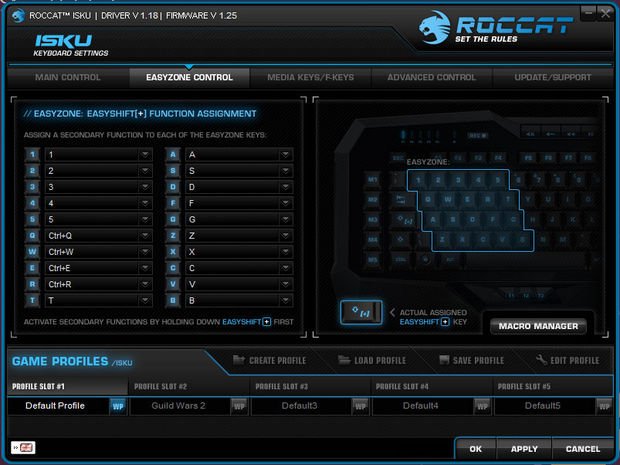 Next up is the Media Keys/F-Key’s macro tab. Again, more of the same. I’m not really one to use the media keys too much, but they’re always nice to have when you decide you want to actually use them. I have to say though, I really enjoy the “My Computer” key and use it quite a bit instead of bringing it up manually. I would also use the IE Browser (it actually just goes off your default browser, so in my case, Chrome) key more, but if you have Chrome as your active window, it takes your current tab to a new tab page or whatever your home page is. I would have much preferred it simply open a new tab. Otherwise, it’s okay — it opens up a new window. Again, I would have been much more in favor of simply adding a tab to an existing window. 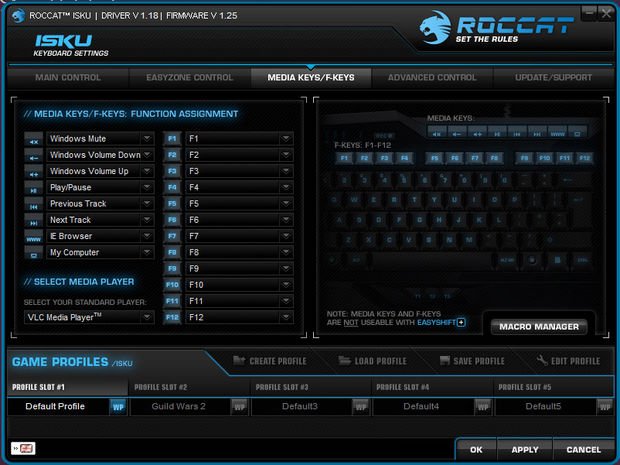 The Advanced Control panel is pretty cool. You can change how fast it repeats a letter if you hold down a key, change the key illumination (note: you can just do this with the illumination key. You can’t make it illuminate at say, 95% — misleading, I know), and choose to make it dim after a certain period of inactivity. 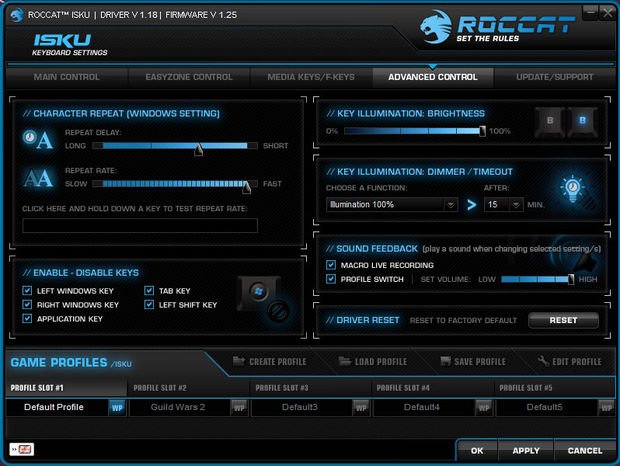 The Update/Support tab is nothing special. Instead of downloading the latest driver at the push of the button, it simply links you to the driver page. It also doesn’t tell you when a new driver is available, as far as I can tell. 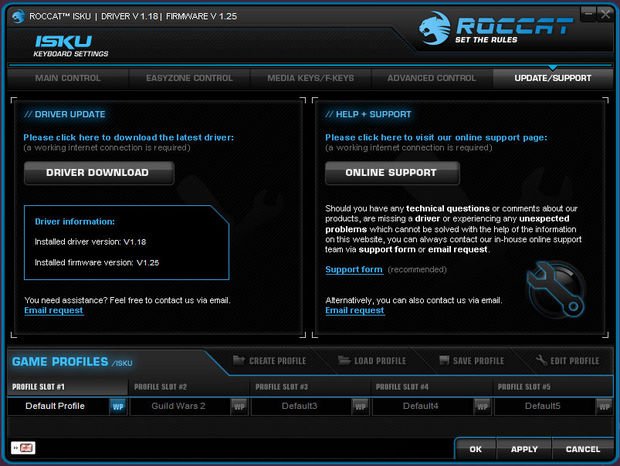 As I’m sure you’ve been able to see from the other screenshots, the game profiles are at the bottom of every tab, and they’re pretty handy, if I do say so myself. You can choose to switch profiles using one of the many macro keys or have it automatically switch on launch of a program.

To review the ROCCAT Isku, I used the following test system, provided by NVIDIA:

The ROCCAT Isku is an excellent keyboard, and really has some nice features. There are a few things that would make it a must have, like mechanical keys and a detachable wrist guard, but all in all, the lack of those features doesn’t detract from it being a very good keyboard.

The Isku is definitely more comfortable to use than the BlackWidow, and the Isku’s software blows Razer’s out of the water. However, I often find myself missing the feel of mechanical keys and bust the BlackWidow out once in a while (though I’ve made the Isku my main keyboard for the time being).

I feel the price is a little high for the Isku, considering it is just a regular dome-keyed keyboard and the mechanical BlackWidow Ultimate is nearly the same price. If the price were $15-20 cheaper (especially since the standard edition of the BlackWidow is only $60.99), I would tell you to drop what you were doing and get this keyboard. That being said, I would still tell you to get this keyboard if mechanical keys don’t do it for you. Otherwise, I’d probably go with the BlackWidow standard over the Isku, between the two — it’s an incredibly close call.