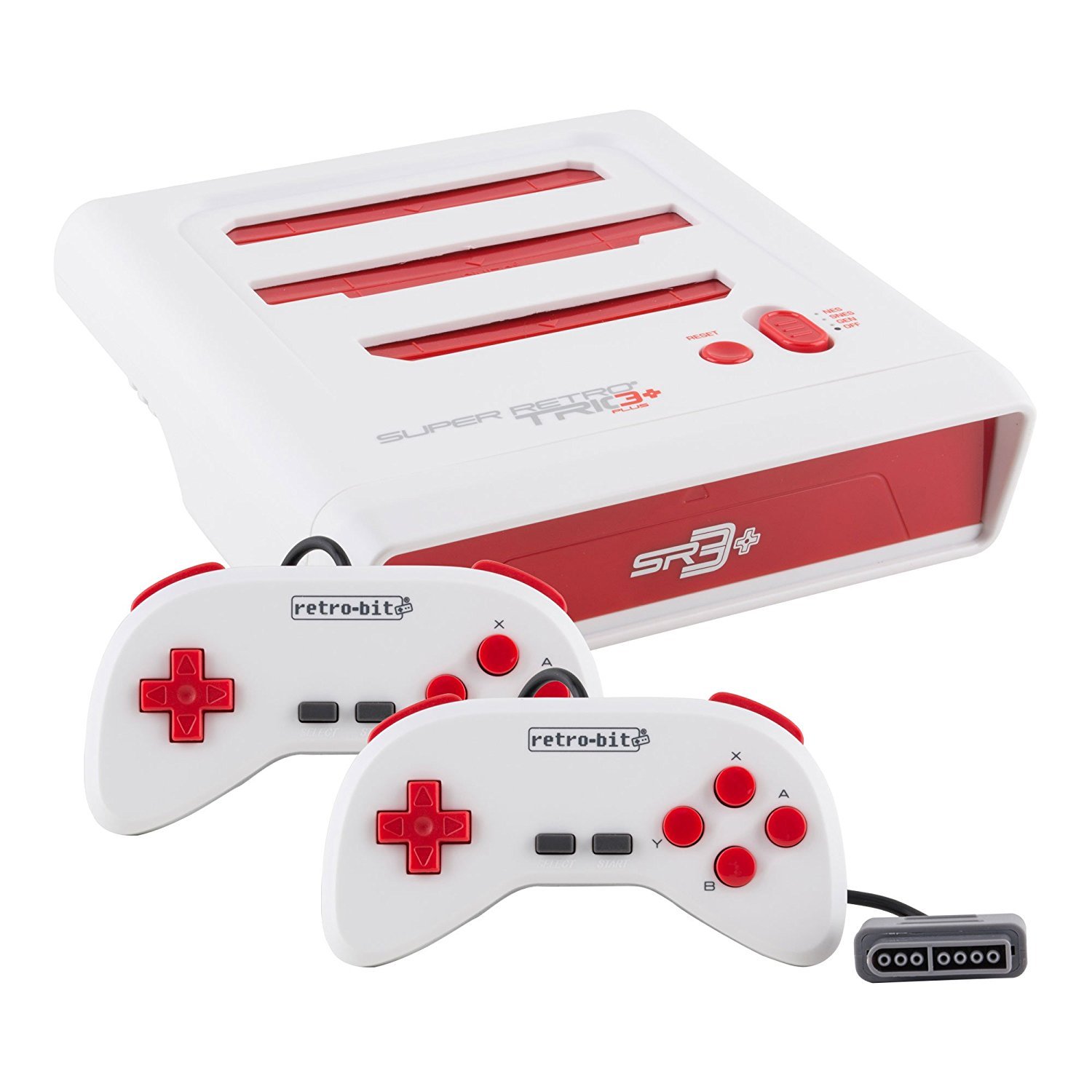 It feels like not that long ago the first cheap NES clones were coming out. They felt so novel back then, a way to play your old games without dealing with the problems of old hardware. Today, a lot of the kinks are worked out, the hardware has (mostly) become more reliable, and they are a dime a dozen.

I have reviewed several here, and I have very little to say about the Super Retro Trio Plus by Retro-Bit. It is a clone console with software on a chip design rather than emulation. It plays Super Nintendo, Nintendo, and Sega Genesis games. It has a front lid that pops down to reveal controller ports for all three consoles and a region switch for region-locked games. It has a handy selector switch to allow you to choose your console on top. And three nice and tight cartridge slots to put your games in.

In short, you have seen this before. It is meant to consolidate all of your old game systems into one. But the addition here, which is a popular one, is 720p HDMI output. 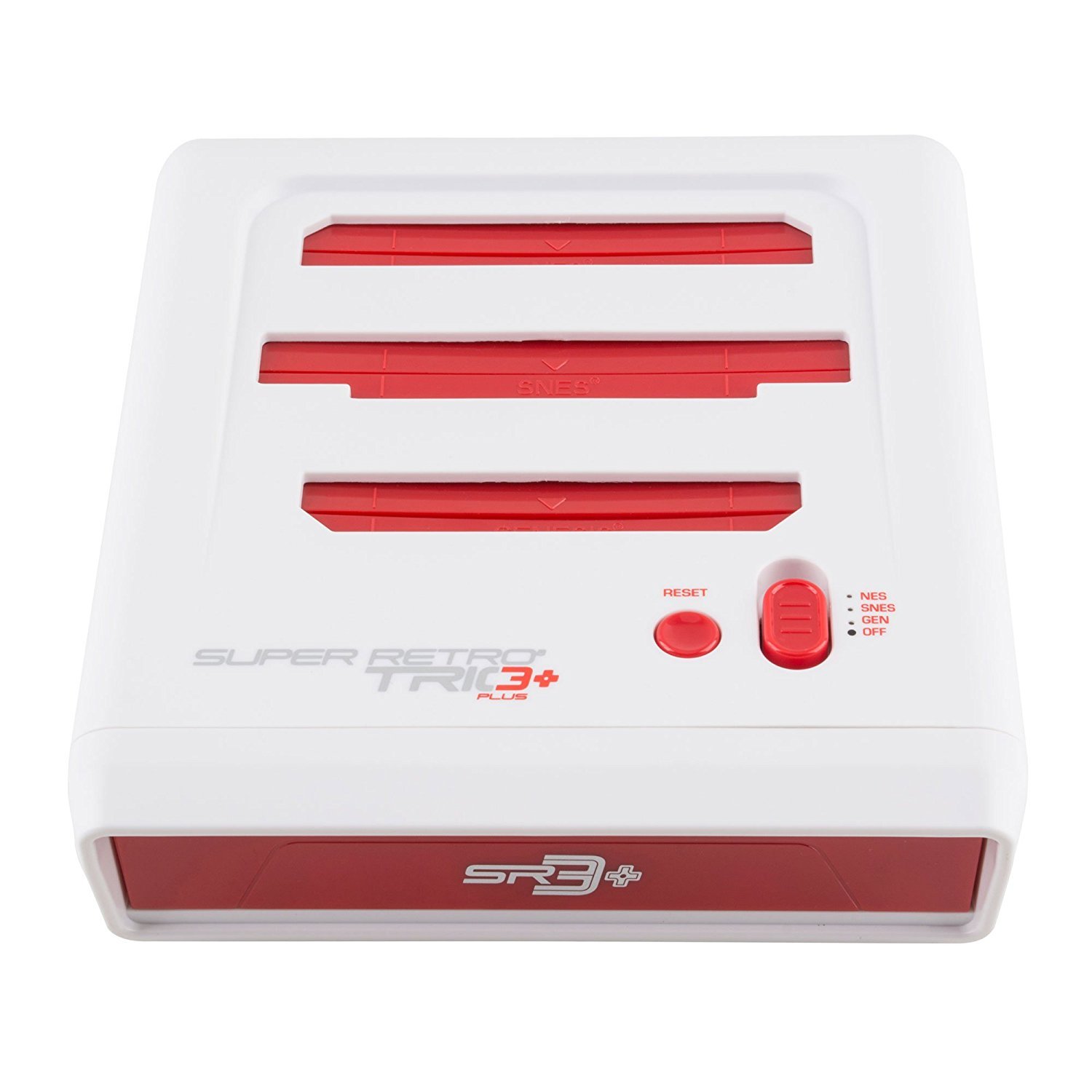 The simple fact that these console clones have been plagued so long by standard composite analog output is absurd. It never feels innovative as much as it does playing catch up when a company develops a product like this with HDMI output. And with insanely respectful and accurate options creeping into the market, such as the Retro AVS, Analogue NT, and Super NT, which use FPGA technology instead of software emulation to far more accurately represent the cartridges they are running, these clones are becoming less desirable as they are outdated by more innovative, reliable technology.

The Retro Trio is basic. With systems like the Retron 5 and the Retro Freak, emulation-based design and the addition of a few additional consoles such as Game Boy, GBA, and PC Engine added value to the purchase. It’s clear that the Retro Trio is more part of an overall marketing strategy from Retro-Bit to encompass a wider space in the retro gaming market, which is fine; more products for people with varying expectations. In addition to these new clone consoles, they are also creating a wide range of accessories, and even their own licensed compilation cartridges for older systems. But it’s hard to see what separates this from the competition in any meaningful way as a standalone product.

Like the recently released NES clone the RES Plus, the 16:9 720p output here is acceptable and nothing more. It isn’t much nicer than what you would get from a composite output, though it shouldn’t be privy to the same video processing issues introduced when you plug an old console into a new TV that way. Video is sort of muddy, colors aren’t always accurate, and the sound quality is the technical equivalent of a shrug. With clones that are based on a single-chip design, you do get the benefit of the unit having a higher compatibility with hacks, flash cartridges, and obscure games. So there is a trade-off here that can’t be overstated if you are someone who owns a lot of unknown games that can easily be dumped and played on an emulation-based console.

The included controllers feel cheap and flimsy — a bit of a disappointment. I have praised the hell out of Retro-Bit for stepping up its game when it comes to controllers in the past. In recent times, it has been putting out far better accessories than some of the poor quality stuff they used to dump on the market years ago. The controllers here are the utter definition of joyless, generic, and derivative; functional enough, but considering Retro-Bit just put out a really nice set of SNES USB controllers, it’s mind boggling as to why it didn’t throw a couple of those in instead. These ones get the job done, but you will quickly be replacing them with something better. At least, I did — and they were other Retro-Bit branded controllers.

Luckily the console gives you an easy way to use whatever peripherals you want. The design choice on the Retro Freak, another clone I reviewed which is emulation-based to leave this compatibility up to an external adapter, was kind of a misfire, and I remember talking to quite a few people about the system and them expressing their disappointment in that choice. So good on Retro-Bit for providing lots of options right out of the box. Compatibility of carts seemed fine. I tossed everything I own at it essentially, and it all worked, including Retro-Bit’s own compilation Super Nintendo cartridges. (Joe and Mac, if you haven’t played it, is a lot of fun especially with two people.) 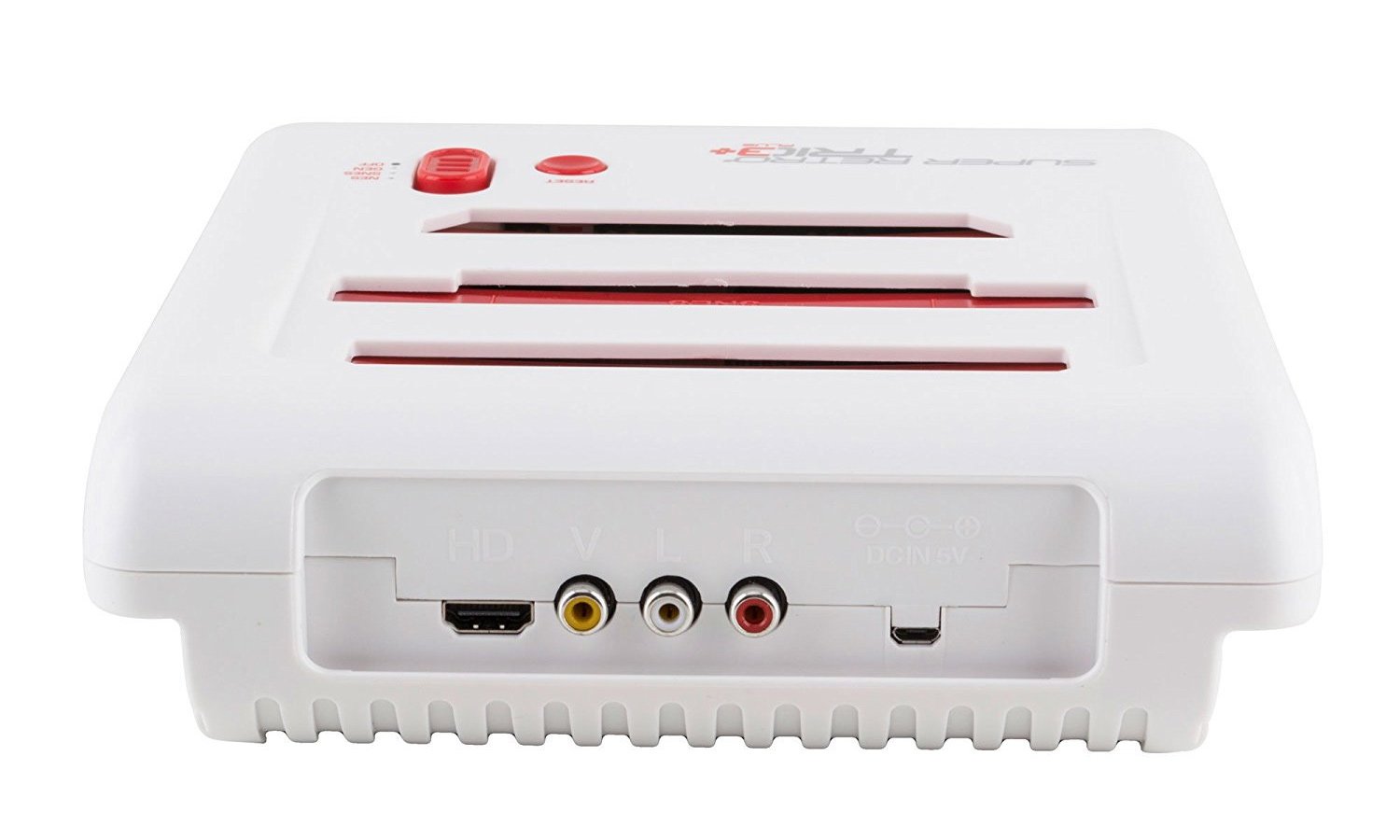 For a price tag of $79.99, it’s another decent clone that won’t blow anyone away. For something more accurate, you will want to consider FPGA or an emulation system, but those come with a far higher price tag, and in the case of the Retron 5, some compatibility issues. This is another entry into the market which allows a more comfortable pairing of older software with newer TVs. While it doesn’t do anything remarkable and I noticed the odd software hiccup here and there with some games (the odd frame skip in particular), it is fine when compared to its competitors doing the exact same thing. It just feels very run-of-the-mill when you consider how saturated the market is now with similar hardware.