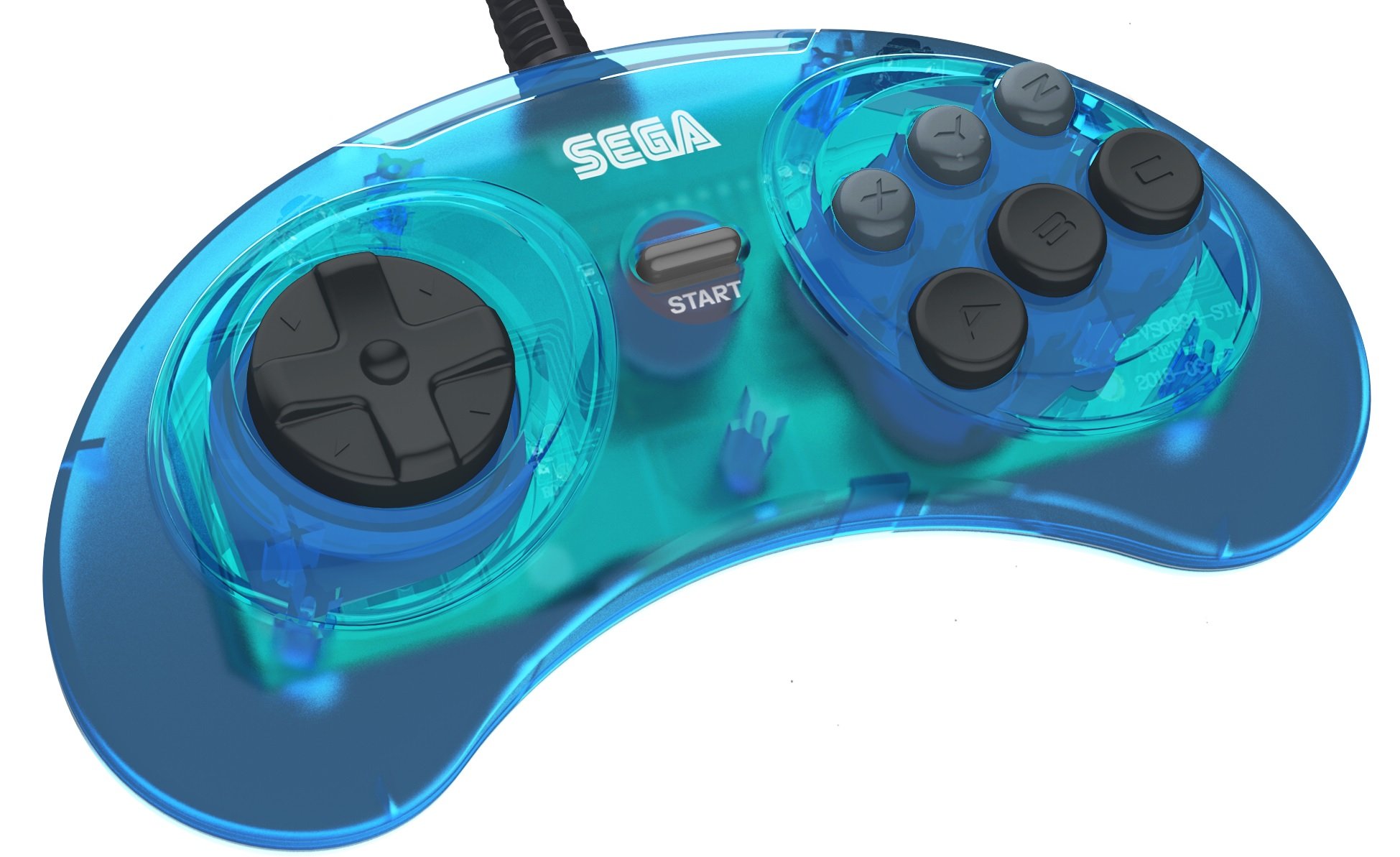 Mine was a Sega Genesis controller I got from the video store my mom worked at. It was no different than any other three-button gamepad except that it had red lettering. I was attached to it for whatever reason, and the Genesis controller has always been my favorite since. I love the rocker d-pad, the big, clicky, comfortable buttons. Sure, the layout is definitely not ideal for some games, and the six-button controller would come later for fighting games and improve immensely on the old design, but whatever the case, between Nintendo and Sega, I will always like Sega’s controllers best.

So when Retro-Bit announced a partnership with Sega to make licensed Genesis and Saturn controllers, touting “Original Grade” quality, I was skeptical, to say the least. While it has upped its game over the years, Retro-Bit had some dismal early offerings for third-party controllers, and the ones since – while much, much better – still don’t match the quality of the originals, even if they are a decent alternative.

When I got a box full of these at my doorstep, I said one thing: I wouldn’t go easy on them. It’s one thing to say you have a new controller, and something completely different to call it “Original Grade.” If Retro-Bit had the confidence to claim that, then it should be judged accordingly, and with extreme prejudice.

Working from the outside in, the first notable thing is the outer packaging. The Sega seal of approval, coupled with a very familiar theme and design, makes these indistinguishable from the product you would see back in the nineties. We are actually dealing with four different controllers here, in two styles each: two Sega Genesis six-button USB controllers, in transparent blue or solid black with added L and R triggers and a different mode button placement, then the same controllers but identical to their Genesis layout and design, with a nine-pin Genesis output. Then we have two Sega Saturn controllers, in a black and transparent design, with USB and original Sega Saturn controller output options. So whether you use emulators, a Raspberry Pi, or the original hardware, Retro-Bit has you covered.

The real king here is the d-pad. The original Japanese Saturn controller’s d-pad was exceptional, and Retro-Bit’s pad feels identical. Since I have several to play with, I made sure to compare them between one another. Generally speaking, I have noticed a few times small differences in quality between products of the same kind from third-party manufacturers, but here, that was absolutely not the case. They were all masterfully built, consistent, and as far as I can tell, spot-on to the original design, with a generous 10-foot-long cable to boot.

Though I quickly fell in love with the controller and happily played Genesis games with it, testing inputs on Saturn is, again, not exactly my forte. (Street Fighter games, for example, had flawless input every time.) So there could be minor differences at play that a hardcore Saturn fan might notice which I didn’t.

However, this is not the case with the Sega Genesis. I grew up with those controllers. I still play Sega games on a regular basis with them. And the controllers Retro-Bit has built here are a flawless facsimile of the original design, down to each and every important detail, in my opinion.

In short, they are perfect.

This is a little shocking to be honest because while I like Retro-Bit as a company, and have enjoyed some of its products, I didn’t expect accuracy or build quality on this level. I played some of the toughest games at my disposal, some requiring frame-perfect input, and even did a speedrun of Ecco the Dolphin. And there was not a flaw to be found here. I don’t know the manufacturing process behind them, but I am convinced that Retro-Bit simply got all the molds for the original design and just built them as if they were new old stock. They are that good.

It’s a first, because while there are certainly halfway decent third-party options out there by Hyperkin, and 8bitdo, they are shades of what this product is. If Retro-Bit can do this for NES and Super Nintendo, it would fill a large gap in the market of picky nerds looking for proper, new controller options for their favorite old game systems.

I don’t have much else to say here, because half the time, I forgot I was even using a Retro-Bit controller and just fell into the games as though they were being played on original hardware. And when you find yourself doing that instead of being distracted by a clicky button, a squishy d-pad, or bad inputs, that is a very good thing indeed.

Retro-Bit, simply put, has developed the only aftermarket Genesis and Saturn controllers worth buying. If you love these controllers, and if your own are worn down or if you want a good USB input option, I cannot recommend these highly enough.

These controllers will be available for purchase in April from Amazon, Lukie Games, and CastleMania Games, and will retail between $14.99 and $24.99 (for the USB versions).

[This review is based on a review copy provided by the manufacturer.]