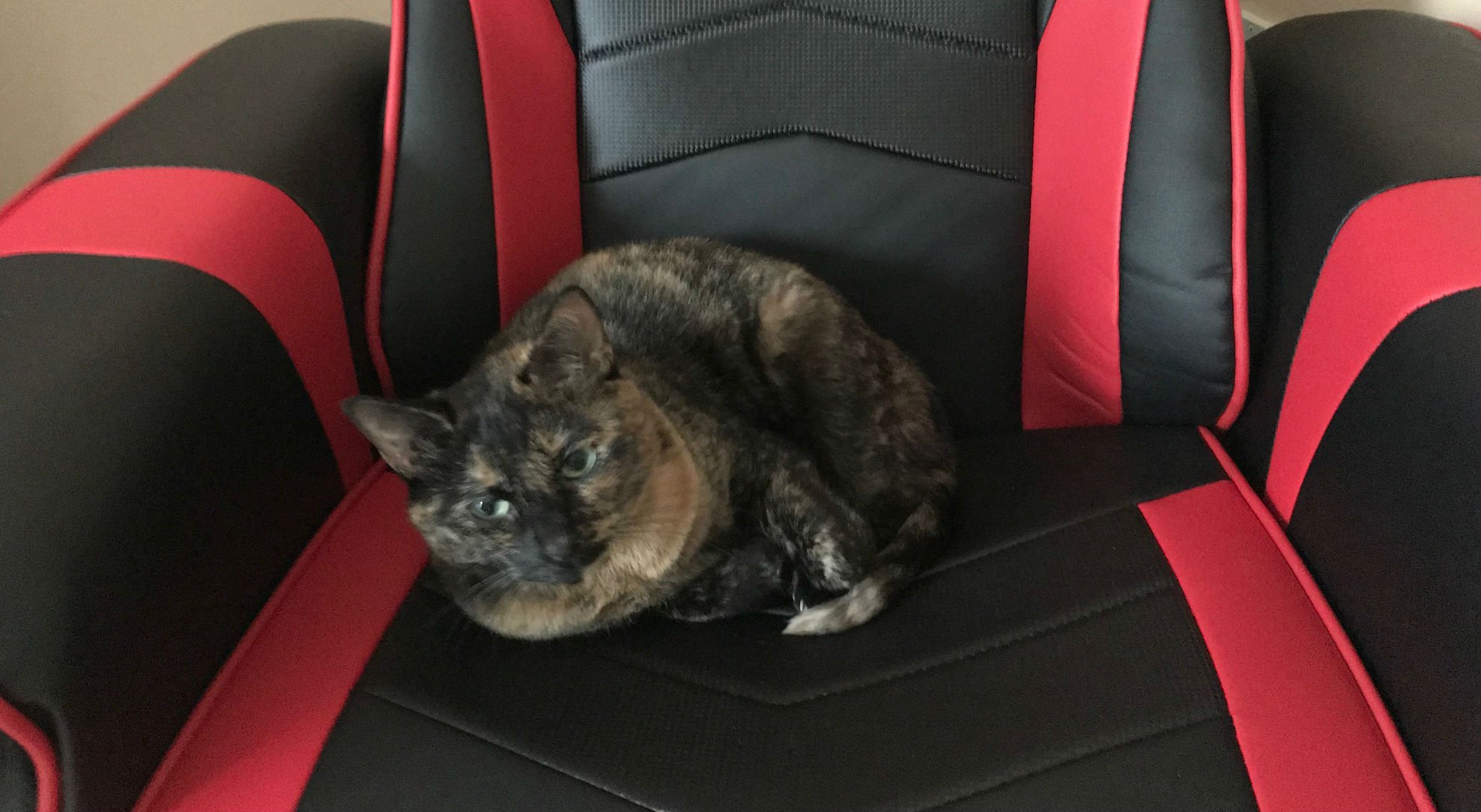 It has a cup holder

I love furniture reviews because they give me an excuse to post my cats. But you probably want an actual review too, huh.

I was recently provided with the Respawn-900 “Gaming Recliner” for testing, and man with this massive time sink of a Division 2 review underway I’ve had a lot of time to do just that.

I’ve built a lot of IKEA furniture in my day so I know my way around a set of minimal instructions, but thankfully the Respawn-900 didn’t have a lot of pieces to juggle. There’s basically three main bits (the back, base, and leg rest) and a bunch of screws with tools that are provided.

In all, it took me about 45 minutes to get it together and the construction feels sturdy: 10 minutes of that was taking the cup holders off because I put them on backward. The only hangup I found is that some of the work requires unzipping parts of the chair to get to the screw holes, which led to all sorts of anxiety as to whether or not they would zip back up all the way (they did) or if I’d be left with an exposed piece of foam. That’s the only “cheap” part of the chair in my mind, but once the process of building it is over with, it’s out of sight.

TLDR: it’s easy to put together and it comes with everything you need.

It really depends on your body type, but as a 6″1′ person, I found it to be just right. There’s an adjustable neck pillow (you can detach it from the back) and the option to recline on top of the footrest. Odds are you can get it in a comfortable position no matter what your shape or size is (though there is an advised weight limit of 275 pounds).

One negative is that the footrest can be kind of hard to pull up as you really need to put some pepper in your thrust sometimes, depending on how much pressure is on the rest itself. The first time I didn’t lift my legs up and felt like I ripped the lever off as it loudly slammed. From then on I just eased off the footrest and I was good.

It also has a cup holder, which I mainly use to set my phone in, and a small bag on the left side of the chair to store a remote or cords. It gets the job done.

I’ve sat in the Respawn-900 for multiple eight-hour sessions (yeah, a looter shooter will do that to you) and didn’t find myself wanting to particularly get up at any point, which is great for a chair you’re going to be spending a lot of time in. Don’t worry, I did! I’m just saying you can.

After sitting for around four hours sometimes I wanted to shift my position. For me, that involves putting my knees up on the footrest, which for some recliners, means pushing the rest back into the chair. This one held up, probably due to the aforementioned tension on the bar apparatus. It’s strong enough to sleep on.

My final word is on the price. Having searched quite a bit for furniture given that I spend so much time on it on the job: $300 is a lot, but recliners can often be found roughly in that price range, with high-end ones pushing $500. It’s definitely more comfortable for long-term sessions than a lot of other gaming chairs, which are more like computer-centric joints, so I can see it warranting the bump.

Put it on your chair shopping list as you make a column of pros and cons, is what I’m saying (somebody else does this for big purchases, right? I’m sure someone will say “duh, it’s called comparison shopping!”).

[This review is based on a retail build of the product provided by the manufacturer.]