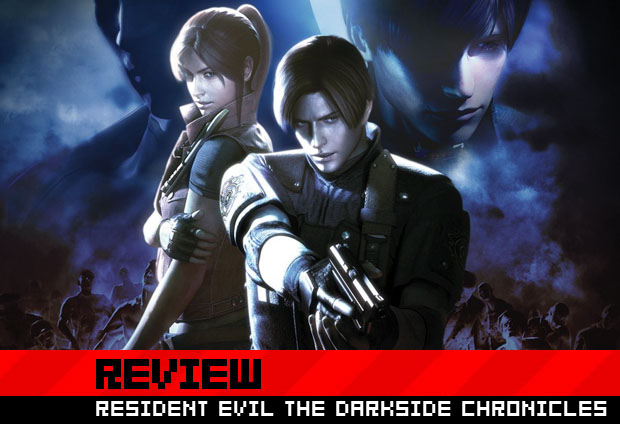 When I first heard that Capcom’s next Resident Evil game was going to be a sequel to the Wii-exclusive Resident Evil: The Umbrella Chronicles, I was pretty disappointed. Umbrella Chronicles actually turned out to be great — much better than I thought it would be — but still, nothing about the game demanded a sequel. However, that’s what we’ve got, like it or not, so instead of b*tching about what The Darkside Chronicles isn’t (namely, a new RE4: Wii Edition-style masterpiece), let’s focus on what the game is: an on-rails shooter specifically designed for the home console market.

Will The Darkside Chronicles live up to the expectations of Resident Evil fans? More importantly, does it work to deliver enough punch to satisfy the home console gamer despite the fact that the action is on rails?

You might guess from the name that Resident Evil: The Darkside Chronicles is “darker” than its predecessor. Honestly, I don’t even really know what “dark” means in that context. Like “mature” or “hardcore,” “dark” is a term people seem to throw around when they seem to want to say “has tons of killing and murder and stuff” or “this ain’t for kids, it’s for teenagers!” If that’s your definition of “dark,” then you may be disappointed to find that The Darkside Chronicles is exactly as violent as its already quite violent prequel. However, if your definition of “dark” involves a more psychologically charged storyline about family and betrayal, then… well… you’ll probably still be disappointed.

No, Darkside Chronicles doesn’t do a heck of a lot to break the long Resident Evil tradition of corny, unintentionally funny storytelling, but at least it tries. Where the unifying factor of The Umbrella Chronicles was Wesker and his behind-the-scenes perspective on the events of Resident Evil 0, 1, and 3, Darkside Chronicles‘ three storylines are connected by a more abstract concept. Though it covers the events of three more or less separate titles (Resident Evil 2, Resident Evil: Code Veronica, and a whole new storyline featuring Resident Evil 4‘s Leon and Krauser), the game still manages to tell a cohesive yarn about families, or in this case, families in the face of a zombie-virus apocalypse. There’s the very unhappy relationship of the Birkin family, the relationship between a healthy brother and sister (Chris and Claire Redfield), a not-so-healthy, flirting-with-incest pair of siblings (Alfred and Alexia Ashford), the mayor and his soon-to-be-stuffed daughter, and at least three fathers who treat their children like so much genetic real estate. In hindsight, Resident Evil The families-who-mutate-and-murder-each-other-for-fun-and-profit Chronicles might have been a more accurate name for this game, but I suppose that wouldn’t have looked as tidy on a DVD case.

Of course, most folks won’t be playing this game for the story; it’s that co-op shoot-’em-up fun they’ll be after. On that front, Darkside Chronicles delivers. There is always, always something to shoot at in this game. Sometimes it’s a zombie who’s far enough away that you can safely try to score a bonus point headshot, or maybe it’s a cow-skull-faced skinny bat-mutant freak that’s jumping around the room with a manic glee; or maybe you’ll be just shooting the numerous destructible items in the environment for the chance at grabbing one of the game’s 200 or so unlockable items. Heck, maybe you just like to shoot stuff and see it explode via the power of the Havok physics engine. Whatever the case, there’s no shortage of opportunities for gunfire here. I think the longest I went without firing a shot in the game was a five seconds, and that’s just so I could stop distracting myself for a second and check out the graphics.

If this is how RE 5 would look on the Wii, then sign me up. Sure, there are a few environments and enemies that have that high-end PS2 feel to them, but they’re a rare exception, and not the rule. More often than not, the game looks as good, if not better, than Resident Evil 4: Wii Edition. Normal mapping, reflective textures, bloom lighting, that Havok physics engine I mentioned before, and some good old-fashioned artistic skill go a long way towards making Darkside Chronicles one of the best-looking “realistic” Wii games to date. The character animation is also worth a shout. While the game looks good in stills, it’s a much better experience in motion. While witnessing the first boss jump in and out of the surrounding swamp, whipping its tentacles in and out at rapid speeds, and generally doing its best to intimidate the fuck out of you, you won’t be thinking about whether the game is in SD or HD. In those moments, this game delivers just as well as anything out there today, regardless of the console it’s playing on.

My favorite visual piece of flair, though, is probably the game’s way with a headshot. Darkside Chronicles may have the best-looking zombie headshot in recent memory. The blood spray and skull-shatter are just plain excellent. More than that, though, it just feels satisfying to pull one of these shots off. I know I may sound like a violence-crazed maniac when I say this, but the way you can decapitate zombies in The Darkside Chronicles may be the game’s greatest attribute.

Like in The Umbrella Chronicles, headshots are especially satisfying in The Darkside Chronicles because they are so hard to pull off. Thought they are a little easier in this sequel, you still need to aim at a very specific spot on the zombie’s forehead, then shoot fast before they shamble out of your sights. If you hit the wrong part of the necro-noggin, the zombie’s head will be knocked back from the impact, requiring you to wait for it to slowly fall back in place before you can have another go. In that amount of time, the zombie (or any of the other enemies in the area at the time) may have already gotten close enough to attack. Balancing risky “offensive” headshot attempts with more defensive “kill whatever is close to you as fast as possible” firing, with the previously mentioned item hunting, makes up the meat of The Darkside (and Umbrella) Chronicles gameplay. It’s a formula that adds a lot more depth than what’s found in more arcade-style on-rails shooters like House of the Dead: Overkill, or even the relatively deep “blow their limbs off, stupid!” stuff found in Dead Space Extraction.

Speaking of Dead Space Extraction, The Darkside Chronicles employs a similar “home video”-style first-person camera technique that I think people are either going to love or hate. Personally, I love it. Having a dynamic, unpredictable camera does a ton to make the game feel alive and keep the player from getting comfortable. That said, if you think you might get frustrated by having a bunch of zombies snatched from your line of sight as the camera runs off in the opposite direction, or feel like it’s “cheap” to make a game a little tougher by limiting the amount of time you have to get a shot in before the camera moves you on, then you’ll probably will get pissed at this game more than once.

So the camera may cause you to miss a shot now and again on your first few tries, but that’s just part of the shmup-like level memorization that you’ll need to apply if want to see absolutely everything that The Darkside Chronicles has to offer. To unlock all of the game’s content, you’ll have to replay its 20+ levels quite a few times. At least three of those levels are secret (and one of them involves shooting giant bricks of zombie tofu), so you might not even get to them until you’ve done some searching (heck, I’m not even sure I’ve found them all yet). As far as types of unlockables, you’ve got the movies, audio files, text files, achievements, and character models, adding up to over 200 in all. I’ve put nine hours into the game so far, and I’m nowhere near unlocking everything.

On top of replaying levels for unlockables, you can also go back into a stage just to collect money (used to upgrade weapons between levels) and ammo. Even after all that’s done, you can still replay levels just to try and nab a high score, which can be uploaded to the game’s online leaderboards. In short, if you like playing this game, Capcom has given you hundreds of hours of reasons to come back to it.

Okay, enough with the praise list. Here are the few things I really didn’t like about the game. For one, it’s got typos. Actually, typos don’t really bother me, but they’re worth mentioning for the grammar police in the audience. For example, the game sometimes spells “government” with an extra “T” in the middle, which I know would drive some of you nuts. Personally, I was much more irritated with the game’s sometimes-painful dialog. I’m a longtime fan of unintentionally bad Resident Evil dialog, but in The Darkside Chronicles, the dialog sometimes seems intentionally bad, like it’s trying to be ironic or something. For instance, Leon (the game’s main protagonist) now calls the once truly frightening Tyrant-103 “Trenchy” as he avoids his attacks, which just totally ruins the horrific mood. As expected, Steve Burnside (Claire’s emotional boy-toy in the Code Veronica segments) has more than a few painful lines of his own. If I remember correctly, he actually says “Zombies! Zombies! Zombies! Zombies! What is this, a videogame?” in the middle of a life-or-death struggle. It’s truly Ed Wood-quality stuff here, and it doesn’t work just as often as it does.

There are a few other things I could nitpick, like a few of the tougher bosses being a little unfair the first time you play them, or an unbalanced difficulty curve (like many RE games, things get too easy towards the end after you’ve become a walking tank), but none of that does any serious damage to the game’s ability to deliver on fun. For any RE fan, The Darkside Chronicles is a must-buy, as it includes the prettiest renditions of RE 2 and RE:CV ever put to disc, as well as that all-new scenario that features new essential background info on previously introduced characters, as well as some awesome new enemies and bosses. For the Wii-owning on-rails shooter fan, the game is also sure to please. It’s got as much content as, if not more than, any other game of its type on the console, coupled with online leaderboards and literally hundreds of unlockable trinkets.

Where many on-rails shooters are content to offer a short, standard arcade adventure, The Darkside Chronicles offers a campaign experience on-par with just about any action/horror game out there. If you don’t like the on-rails genre because you think the games are always too short or too shallow, you may want to rethink those notions. Games like Darkside Chronicles and Dead Space Extraction are evolving the genre in a fantastic way, and that’s something you might not want to miss out on.