There’s a growing trend on Xbox LIVE Community Games. Developers are creating silly applications and clunky tools for entertainment purposes instead of games. I won’t pretend to know the reason why  — although I suspect it’s easier to make a controller shake than to create a level — so, instead, I’ll point out that Remote Masseuse is one of those aforementioned XBLCG tools/game-things.

The text in the game doesn’t say it, but let’s be honest: Remote Masseuse is some sort of weird pleasure-bound toy. In the review below, I approached the game in three different ways: as a novelty program, as a tech demo and finally as some sort of pleasure device. (Psst: this thing got nowhere near my loins.)

There are three ways to look at Remote Masseuse. The first is to see it as software designed to soothe aching muscles through the use of the Xbox 360 controller’s rumble functionality. The second is to see it as a novelty program or a superfluous (and very late) tech demo. The third is as some sort of gonzo intimacy tool. Regardless of how I try to view Remote Masseuse, two things keep jumping out at me: it isn’t a game and it certainly isn’t fun to mess with.

Remote Masseuse allows for total control of the Xbox 360 controller’s rumble by flicking the left analog stick in two directions. Side-to-side flicking increases and decreases the speed of coarse rumble. Up-and-down motions control the speed of the fine, light rumble. A couple of presets are available as well: the “Constant” setting allows for a steady, pyrotechnic rumble, and “Pulsing” is a middle-of-the-road, rhythmic-style rumble — a heartbeat, more or less.

There are three modes available: single, local, and network. Single play has you fiddling with the rumble toggles yourself. Local and network allow for players to control each other’s rumble. 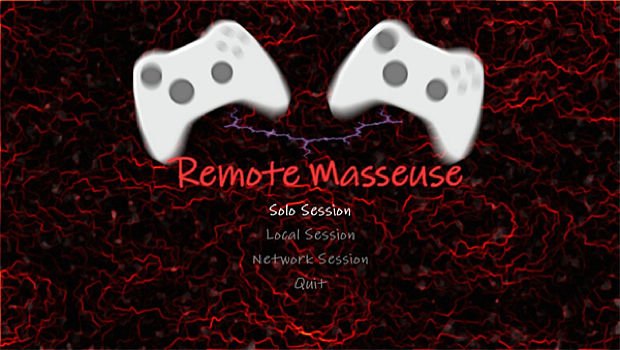 Remote Masseuse is an utter failure as a massage tool. It starts and ends with Microsoft’s peripheral, designed exclusively for use with games like Halo 3, Mass Effect, and Braid. Microsoft didn’t design the controller to be flipped upside down, inverted, or applied directly to the body. The battery pack bulge prohibits the controller from sitting directly on a sore triceps, neck, or even back muscle. The little pressure that can be felt from the two wings is negligible at best. I’ve had weight benches that felt better on my back than the hard plastic gyrations that Remote Masseuse and a controller produce.

Remote Masseuse is also a bad tech demo or novelty program. The price of the game — 200 Microsoft Banana Dollars — is small enough to spend giddily in order to entertain friends; however, the limited nature of the program won’t produce many laughs. If anything, friends will be more inclined to laugh at the not-so-sly reason for the game’s existence: as some sore of stimulation device.

If I got your hopes up, I apologize. I did not place a rumbling controller over my junk. I haven’t the slightest idea if this actually works for whatever reason a person would need this to exist. My guess is that it probably does to some extent, and honestly, I feel like washing my skull and scrubbing my eyes after consideration. 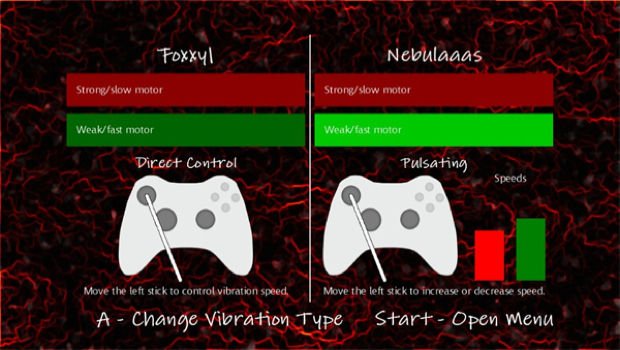 One quick note: Remote Masseuse has a wretched backdrop. Grotesque red veins stretch, storm and twist across a solid black base. The art is the background for all three modes in the game. It can’t be escaped. There is nothing to see except for it, outside of white outlines of controllers and the bars for gauging rumble.

Remote Masseuse is a cheap Xbox LIVE Community Game — but it’s definitely not a game. It’s bad software for massaging and it’s an equally bad novelty buy. Its ability to make things interesting in your pants is something I’ll totally leave up to you, the reader and possibly buyer, to decide. Remote Masseuse is coy about its intended purpose, but even so it would be silly for me to give this a score without truly using it how it was intended. My take is that it’s a silly program on an already cluttered service. Buy Weapon of Choice or CarneyVale Showtime instead.