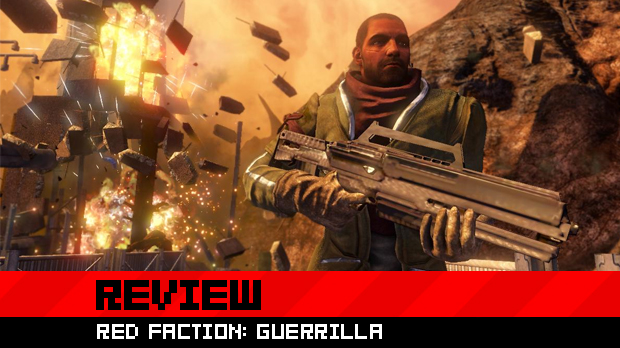 With so many recent open-world games — inFAMOUS, Prototype, and Red Faction: Guerrilla — I can feel myself beginning to grow tired of the genre. Not because any of them are bad, but because they all seem to suffer a few issues that continuously pop up and annoy me to no end when they do.

Combine the three titles, and you’d probably have yourself one hell of an awesome ride, or possibly a disturbing freakshow of a mash-up gone wrong. As separate games, their flaws are noticeable, but do their more charming aspects make the overall product worth experiencing? In the case of Red Faction, that’s a strong “yes.”

Catch the full review after the break to find out why I think that is.

We all play videogames for different reasons, which is something that must be considered when talking about a game like Red Faction: Guerrilla. Some play for a deep, enriching story, while others — as proven by the success of games like Crackdown — are all about feeling like a badass in a virtual realm. Considering the amount of marketing power that was put into promoting Guerrilla‘s destruction system, you can more than likely guess which category the game falls under.

I came into this game with little insight as to what it was really about. I knew that you played some guy named Alec Mason who fights against the Earth Defense Force on Mars alongside a group called the Red Faction, but that was about it. Having beaten Guerrilla, I wish I could say there was more to the story than that, but there honestly isn’t. You will boost civilian morale, liberate various sectors of Mars, and you may or may not win the outmanned and outgunned conflict against all odds. As I alluded to before, a strong story isn’t the emphasis here, but it doesn’t need to be, either. And yes, this means you won’t have to play the previous two Red Faction games to understand what’s going on in this one, so quit your worrying.

While running, driving, and hovering your way across Mars, you will spend the majority of your time either A) smashing EDF soldiers in the face with a sledgehammer or B) tearing down large structures and buildings with whatever crazy weapons you can find. This is a good thing, primarily because of Guerrilla‘s ability to bring some of the greatest, most enjoyable destructible environments ever seen in gaming. Also, smacking people in the head with a huge hammer is way more satisfying than it has any right to be. 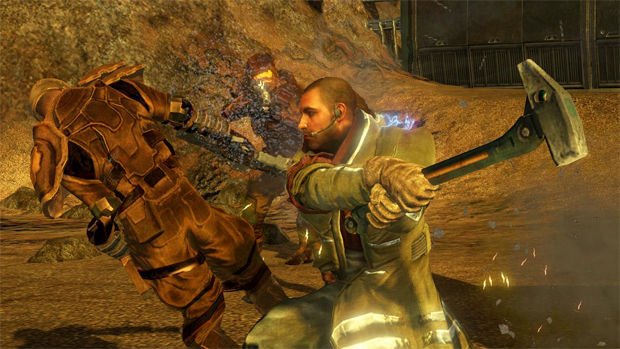 As per the unofficial rules of open-world games, there are plenty of side missions to fill your time. These task you with a nice list of things to achieve, including: smashing your way through EDF property to rescue hostages, destroying single buildings as fast as possible with specific implements of destruction, trashing waves of Earth Defense Force scum with nearly-invincible mechs, and driving stolen vehicles back to safehouses. There are a few more, but you can pretty much bet most of them revolve around you blowing something up to inevitably win.

Unsurprisingly, the least fun of the side quests are the driving ones, because let’s face it, most of the cars on Mars don’t handle particularly well. To make matters worse, the time you have to get the vehicles back to a safehouse allows for very few mistakes, and you could potentially be told to drive all the way across Guerrilla‘s vast landscape. Thankfully, this mission type can be avoided altogether and you’ll still progress through the entire game just fine, unless you’re hell-bent on getting all of Alec’s upgraded weapons and abilities quickly.

The upgrade system serves as an excellent incentive to get you helping the Red Faction through main or side missions, and hunting for Ore, the game’s major collectible (300 of ’em in total!). These methods, as well as a few others, give you Guerrilla‘s currency, “scrap.” Besides upgrading Alec to have basic things like increased armor, and the option to teleport between the Red Faction’s safehouses, there’s also purchasable upgrades like a jetpack, and a gun that disintegrates buildings, vehicles, and pretty much anything other than the ground itself. You start out with basically one option, your trusty hammer, but by the end you won’t have to resort to guerrilla warfare to keep up with the EDF. 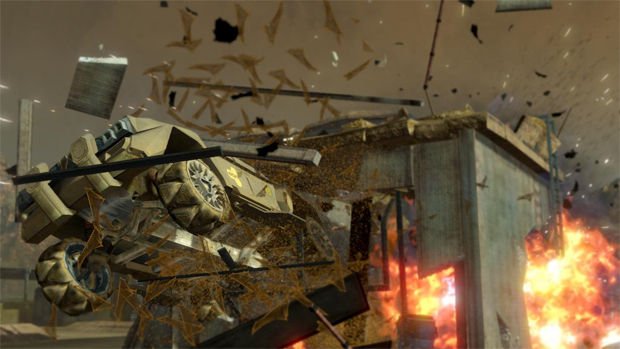 With Mars being as open and as large as it is in Guerrilla, it’s unfortunate that you can only jump to a few select markers on the map, the safehouses; more often than not, you will be forced to drive long distances to get to your destination. This problem is only made worse by the fact that Mars — as a planet — isn’t really diverse color-wise. There’s obviously a lot of red in the color palette, but Volition did a decent job mixing it up with brown areas and even a section with snow.

It may not seem immediately noticeable, but by the time you’ve completed the story, your eyes will be longing for something more. One way to address this would’ve been to give the planet more tightly-packed sections of buildings, but I imagine the advanced level of destruction under such a scenario would result in terrible, inconsistent framerates.

While I haven’t been forgiving when it comes to Guerrilla‘s plot, I must note that I continued to have fun throughout the entire thing. Sure, it wasn’t terribly exciting, and to me it felt like it sort of just ended, but it was however good enough to hold my interest. To reiterate, it’s almost comparable to a summer blockbuster that doesn’t quite live up to the hype. It’s got its moments, for sure, but experiencing it once all the way through is more than enough. 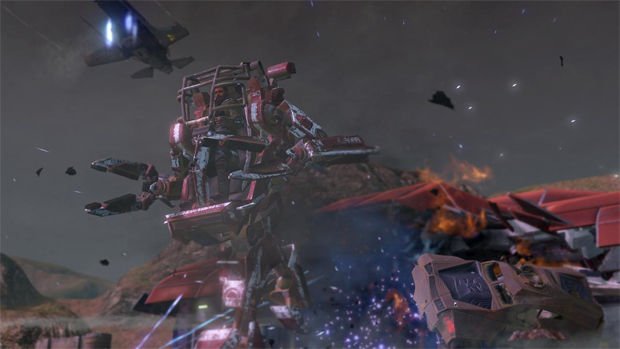 So, amazing destruction … is that all this game’s got? As a matter of fact, no! There is one more huge aspect of the game I haven’t mentioned yet, and that’s the multiplayer. As weird as it is to say this, especially for an open-world game, the multiplayer is fantastic. It’s some of the best I’ve seen in recent years, believe it or not.

Part of the reason why the multiplayer is so good is that Guerrilla‘s flaws — driving, a lackluster storyline, loads of traveling across empty areas — are dropped, while its ridiculously fun destructive features are present, and even amplified. The coolest addition over single-player, by far, are the backpacks. These come in all shapes and sizes, and you could almost think of them as “classes.”

To give a few examples, the rhino backpack lets you charge forward, destroying anything in your path, including enemy players. There’s one that grants you a Predator-level of vision, another gives your character the gift of flight, and my personal favorite lets you become nearly invisible. Stealth kills with a hammer? Insanely fun. Needless to say, these power-ups bring a level of strategy and excitement that isn’t anywhere to be found in the single-player.

For modes, there’s the standard deathmatch, team deathmatch, and capture the flag. Beyond those, Guerrilla has Damage Control, which involves players capturing and destroying control points, and Seige, which has you either attacking or defending specific structures. Now these may not sound terribly exciting on their own, but when you factor in super powerful weapons, the backpacks, and the incredible destructible environments, suddenly you’ll find yourself unable to stop playing. 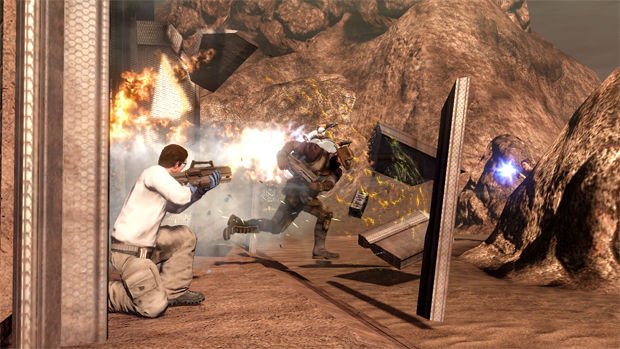 Even more surprising than the modes themselves being fun to play is the lobby system. It’s essentially Halo 3 with a new skin, but that’s a proven formula and besides, it’s a sandbox game; what more can you ask for? It’s kind of sad when a game like Guerrilla can top the lobby system of a multiplayer-focused game like Gears of War 2, I would say. It’s also worth noting that in the many hours I have spent playing online, only three or so times have I ever experienced any sort of lag, and that’s a major plus.

The third, final piece of the puzzle that makes the multiplayer so great is undoubtedly its experience points system. You know how Call of Duty 4: Modern Warfare made XP-based unlocks so popular in online shooters? Guerrilla takes the idea and runs with it. Instead of unlocking new weapons, or perks, you unlock new characters, customization options for your icon, and sledgehammers, including the popular ostrich hammer.

The number of unlocks is astounding, which in turn makes the pacing really good. Better yet, you can even earn XP by creating your own custom matches rather than resorting to playing against people you don’t know. 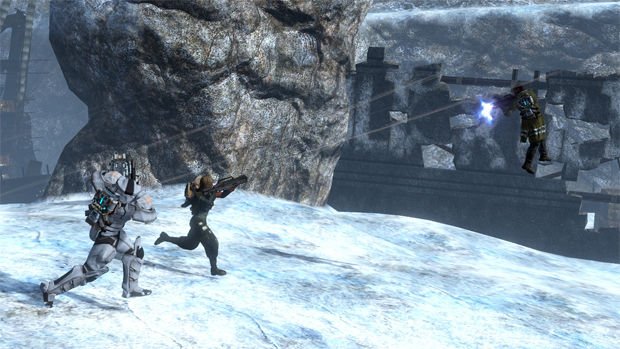 And in case you feel like breaking stuff without having to play with others over the Internet, there’s Wrecking Crew, an offline-only “pass the controller” multiplayer mode. You pick your weapon, your backpack, and a map, and are awarded points for obliterating everything as quickly as possible. A simple concept, definitely, but it ends up being a blast if you can get another person to come over and play.

If the thought of living out an action movie is not your idea of a good time, you probably aren’t going to get a whole lot out of Red Faction: Guerrilla. But if such an idea sounds like it could be appealing, the game should be put on your “to buy” list, and soon. And if you happen to be into a little online multiplayer action, the purchasing decision should be made even easier.

There’s more than enough content to get your money’s worth, especially if you don’t need to be told by a game what to do, and can create fun and mayhem in a sandbox world by yourself.