After a week of being asked, “Where’s the Red Dead Redemption review,” by damn near everyone, here’s the answer: It’s here. Are you vultures happy now?

Red Dead Redemption is, of course, Rockstar’s latest epic sandbox adventure. Wild West, gunslingers, horses. There’s a tale of vengeance and enemies both in man and nature. Like I said, epic stuff. Now that I’ve had time to play through the game in its entirety, I’m ready to lay down whether or not you should do the same. 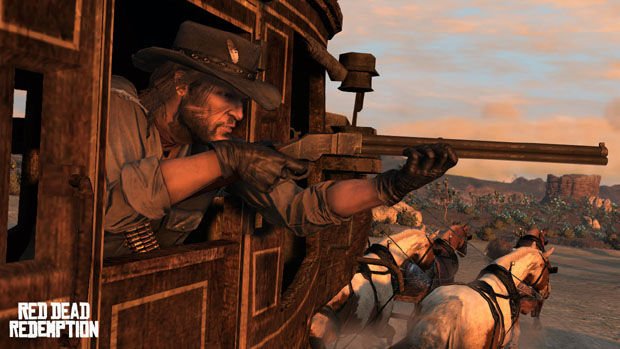 The plot of Red Dead Redemption‘s single-player mode revolves around John Marston, an outlaw forced to hunt down his former partners to save his family. Set in 1911, this is the very end of the Wild West era and civilization is encroaching upon the frontier. This sets a wistful tone that permeates throughout the generally satisfying story.

Marston is exceptional as a leading man. His history is typical for a story by Rockstar — the troubled criminal who wants to redeem himself — but that’s where most similarities end. He’s bound by a personal code and respectful to others, even when he’s about to gun them down. Women, in particular, are on the receipt of no small amount of kindness. You always know where you stand with John Marston, but he’ll be considerate about it when he tells you.

If only the supporting cast were as strong. The game’s opening hours build up a lot of hope for the title, as you meet interesting, dynamic and realistic characters in local ranch owners the MacFarlanes, and the marshal of the town of Armadillo. Sadly, these more complex characters are eschewed early on for a parade of caricatures and comic relief. About half of the people you meet along the way seem like real people with real problems and the other half make you question how they would have ever survived in this world.

It’s not limited to the main quest characters, either. You can accept side missions from strangers you meet in your travels. These are more passive quests that can be completed at any time alongside your weightier concerns. It’s all very simple fetch quest stuff, but the people you meet all appear to be deranged in some way. Perhaps there’s a metaphor at play, but their presence really seemed unnecessary and I would have much rather enjoyed more people who seem sane when Marston leaves them. 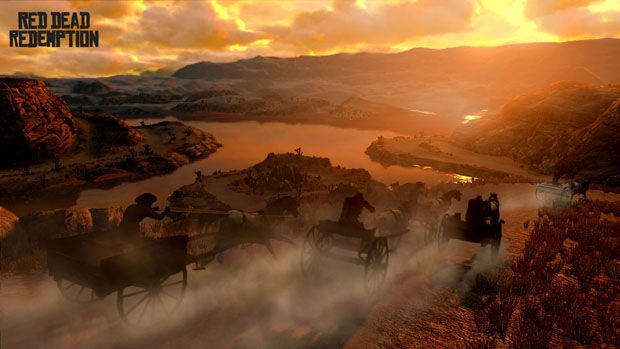 Overall, the story is enjoyable and will take players through the fictional state of New Austin, down into Mexico and back. There’s a healthy level of mission variety paced throughout and there’s rarely time to become bored with it. Things do peter out a little bit on the long side towards the end, however. Players will probably already be aware of the game’s inevitable conclusion well before the game finishes dragging out its final act. Short of that and some rather awful characters, it’s good fun.

When you aren’t trying to redeem yourself, there’s plenty enough to do in the world. Red Dead Redemption features the most active sandbox I’ve ever encountered. Everywhere you turn, there’s something to shoot. The environment positively teems with life of all varieties and hunting that life is a fun way to kill an hour or two. Some of the game’s regions can be downright dangerous to walk about in, with bears and other forms of wildlife capable of taking you out instantaneously.

Towns offer their own diversions as well. As you travel, new mini-games open up for gambling. As you might expect, there’s poker to be played, as well as blackjack. Liar’s Dice is one of the more strategically fun games of the bunch and there’s even some rhythm offering in Five Finger Fillet, where you dance around your digits with a knife. You can accept bounties to hunt in the wastes and, of course, engage in good old-fashioned duels.

Not only that, but random people will approach you and ask for favors. They might need a ride back into town or ask you to chase down a horse thief. Some out in the world will wager against you in shooting and hunting contests. Sometimes what looks like a broken down carriage hides a bandit ambush. You really never know what you’ll encounter as you explore and the constant level of activity keeps everything feeling fresh and exciting. 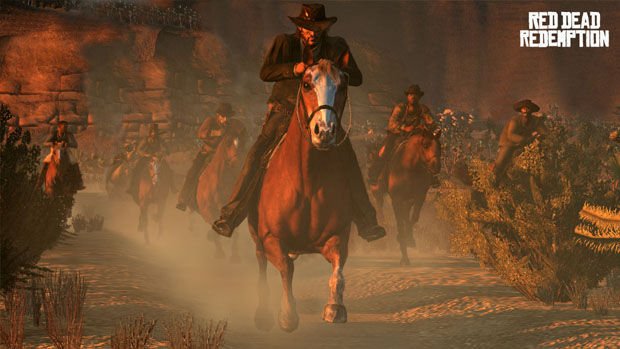 Travel in the world has been made very convenient as well. While the game’s map is not exceptionally large, traversing it on horseback is time-consuming, especially with all of the distractions on offer. Thankfully, fast travel has been implemented in a convenient manner. Building a campsite just about anywhere in the world will allow you to directly travel to places you’ve visited. Buying maps of the various regions lets you set checkpoints and even fast travel directly to those.

Which isn’t to say that you won’t want to ride your horse everywhere. Riding horses is wonderful. It takes a little bit of getting used to, however, and your early horses won’t have a lot of patience for you. But once you’ve found yourself a good steed and have the hang of spurring him effectively, they are a joy to ride.

Combat is very streamlined and accessible. Aim assist is there to lock you on to an enemy target if you need it and just about anybody can be a competent shot. It works very well on foot or on horseback, and is just a pleasure to use. There is some variety to weapons, but they all feel much the same in application and having all of the different sorts of guns in each category (rifles, pistols, shotguns, etc) isn’t really necessary.

In addition to your standard shooting capability, you can also attack enemies using “Dead-Eye” mode. This ability evolves over the course of the game, starting out with a simple slow-motion and eventually allowing you to designate where you want your shots to land. Fanning out the full cylinder of a revolver and obliterating all in your path is a highly satisfying endeavor. You are limited in the use of Dead-Eye by a meter, but it restores quickly and expendable items to replenish it are cheap and plentiful. 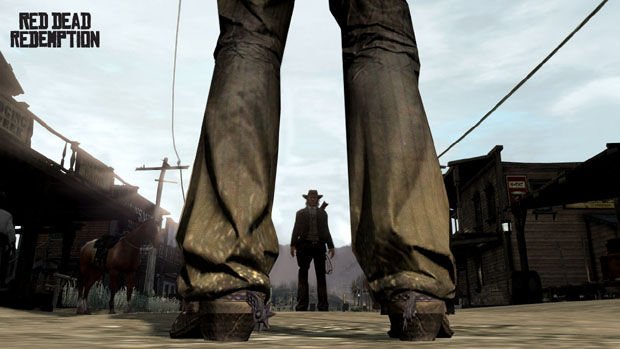 Beyond Red Dead Redemption‘s single-player campaign is a multiplayer component. Loading it up will place you in Free Roam mode, which allows you to travel throughout the whole world with other players. It’s just a simplified version of the game’s map and is considerably stripped-down to accommodate the presence of more player-controlled characters. Gone is the lush wilderness teeming with life, and it’s a little lackluster by comparison.

There’s some stuff to do in Free Roam, but not a lot. You can posse up with other players, enact your own gang fights and so forth. You can also team up to take on the various bandit hideouts. Doing these sorts of activities gains you experience points that unlock new character models, weapons and mounts, which can be used in all the multiplayer modes.

From Free Roam, you can enter into more structured games. There are team-based and solo games to play. Shootouts are deathmatch modes and can be played solo or in a gang. Grab the Bag and Hold Your Own are capture-the-flag variants for teams that have you fighting with another team over a bag of gold or each defending a bag from the other team respectively. And Gold Rush is a solo mode where the object is to grab bags of gold and drop them off in chests.

All of the modes are fun, though Gold Rush doesn’t work well on all maps and you’ll occasionally have a dud game of that. The action is quick and the pace can be breakneck with a full game. I was pleasantly surprised by how effective you are made to feel even when you aren’t doing particularly well. The combat is so easy to play that success feels within your grasp with a little practice. Map design is strong with plenty of great cover and vantage points.

All told, Red Dead Redemption is a stellar title. While I have some issues with the story and characters, the simple joy of interacting with this world more than makes up for those complaints. Add in a compelling multiplayer component and you have one hell of a game.