Until recently, I had always used the same mouse forever: the classic, three-button optical mouse with nothing special about it. It was, and still is, passable, but my competitive gaming needs are a bit higher these days. Using the keyboard for voice chat just isn’t going to cut it.

The Razer Taipan mouse is a good step up from the basic model that I, and many others, have always used. It isn’t too complicated and strikes a nice middle ground between basic and complex. It doesn’t have a million buttons nor does it feel too simple or cheap. It’s marketed with a heavy emphasis towards “eSports athletes,” but if you’re a normal schmuck like me who likes to play Counter-Strike and MOBA games with a hint of seriousness, it’ll make you happy just as well. 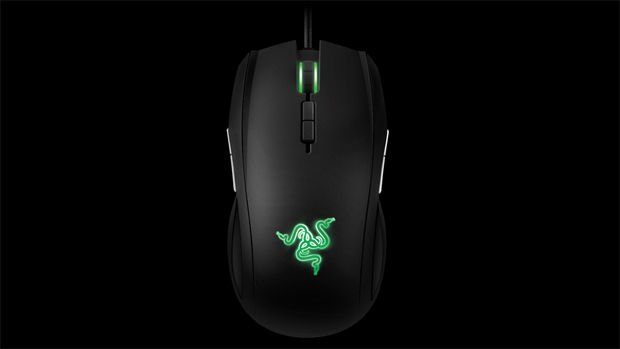 Regardless of any amount of gizmos or doodads, comfort is a big key factor for a gaming mouse. The Taipan is incredibly comfortable for me, as someone who uses the aptly named “palm grip” on his mouse. Both the left and right sides have rubberized grips running up towards the front which feels nice and also helps with gripping the mouse for extended periods of playtime.

The Taipan is also suited for lefties since its design isn’t biased on either direction. The grips and mouse buttons on the left side are also on the right side, so no features will be missed for lefties using the Taipan due to this symmetry.

I’ve had long gaming sessions playing games like Dota 2 and Path of Exile that rely heavily on mouse movements and constant clicking, and never did I start to feel uncomfortable while playing. Careful attention was paid to make this mouse ergonomic and it shows.

The Taipan mouse is wired with a braided cable. The braided cable looks and feels neat, but in practice it may be a bit of a nuisance. I’ve been using this mouse for about two months and the wire still isn’t exactly straight like a rubber wire would be, and still has slight kinks from how it was wound and packaged. The braided wire has also begun to fray as it rubs against the edge of my desk. Not exactly the best sign for the longevity of the device.

Beyond the standard left, right, and middle mouse buttons, there are two buttons on both the left and right sides and two buttons below the mouse wheel, for a total of nine buttons. The box calls them “hyperesponse buttons” but they feel like regular ol’ buttons to me. By default, the side buttons will go forward and backwards in browsers while the two below the mouse wheel will adjust the sensitivity of the mouse on the fly.

There are up to five sensitivity stages that can be set, all of which are completely customizable with a maximum of 8200 dpi. Being able to customize the stages as well as adjust the dpi as needed is a strong addition, though on a few occasions I did find myself accidentally hitting the top sensitivity button nearest the mouse wheel. As a righty, I have also hit the buttons on the right side of the mouse when simply moving the mouse to the left and eventually ended up disabling them altogether in the software.

There is also a “Dual Sensor System” in place, using both a laser and an optical sensor in order to provide good tracking capabilities on any flat surface. It works as well as expected on the flat surfaces I could find; just don’t use a shag rug as a mouse pad and you’ll be satisfied. 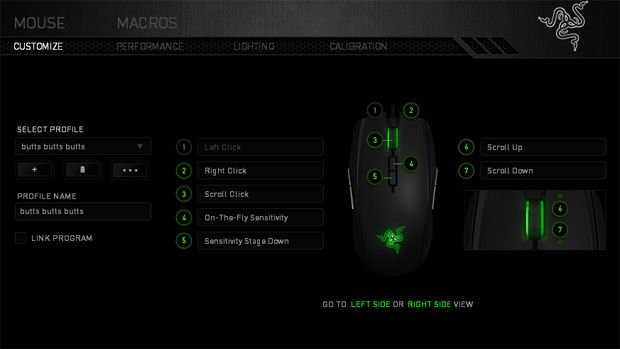 The software used is the Razer Synapse 2.0 and it works quite well. Of course, it allows you to remap any of the buttons on the mouse, and will even make sure that a “left click” is always assigned to prevent getting stuck without one and bricking the device. Macros can be recorded and set, liftoff range can be adjusted, and the colored lights in the mouse wheel and top of the mouse can be turned on or off (though they are not color customizable). Profiles can be saved and then accessed on any other machine without setting them up again using the almighty cloud service. This is meant for players going to tournaments and such, but it’s a nice feature to have for more casual gamers, too.

The Razer Taipan is a great middle ground for those who like to play competitively, regardless of whether or no they’re playing in actual tournaments. It’s simple enough as to not be overwhelming, while at the same time having plenty of features that the more hardcore players want to see, such as quickly adjustable dpi settings and macros.

Priced at $79.99, it’s hard to recommend it over the very popular DeathAdder, but the Taipan is still a great mouse to handle most competitive gamers’ needs. The braided cord can definitely be a cause for concern, but the mouse feels great, the software works with no issues, and it’s as customizable as anyone could want.