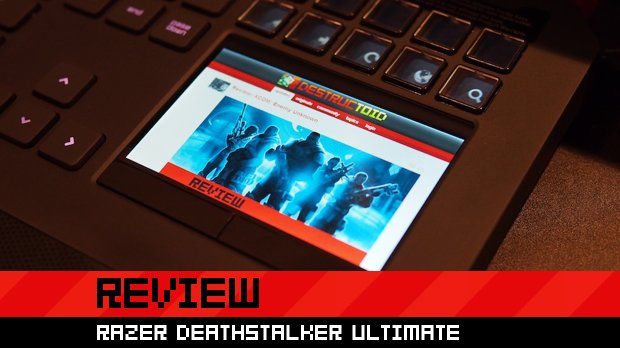 What would be the ultimate keyboard for PC gaming? No, bigger. Like, ultimate ultimate. Holograms and laserbeams and sh*t? That stuff is not possible yet, but how about a multitouch screen display and 10 programmable buttons with their own dedicated backdisplays? Crazy enough for you? How about backlit keys that you can assign any color to?

There are lots of keyboards out there, but no one has gone balls-out crazy and made something that would give us true accessory lust yet. Maybe this new keyboard from Razer, the Deathstalker Ultimate, might be that for you.

Razer took the Switchblade UI from its lovely gaming laptop and stuck it in a keyboard. You can’t not see this thing when first looking at the keyboard, especially when there’s something running on its little LCD screen. What’s crazy is that you can touch (multitouch, with full support for gestures) this screen, using it like a notebook’s touchpad. Or, you can set it to be more virtual buttons, or even a secondary screen. I did everything from checking my email to watching YouTube videos on this little screen. Everyone that has entered my office this last week has been forced to watch a tiny 4″ corgi music video on it.

But how useful is this Switchblade UI beyond the novelty of tweeting on a little screen built into a keyboard? Ideally, you’d use the touchscreen and the programmable 10 display keys to their fullest potential with games that fully support it as a device. For example, Battlefield 3 has you accessing supplies and switching weapons using dedicated keys. Or in Counter-Strike: Global Offensive, you can diffuse bombs or swap gear with a button press. These functions come by way of a dedicated app, and Razer says that more of these will be available for the keyboard soon.

Ultimately, the Switchblade UI is entirely customizable, making it an incredibly powerful tool should you want to put in the effort.

The Deathstalker Ultimate’s keys are high quality and impressively responsive, but they’re the low-height notebook style keys, which might bum out fans of mechanical keys (like those of Razer’s BlackWidow Ultimate). In extended play sessions of games like Batman: Arkahm City and Dishonored, the keyboard keys performed so nicely that I hated disconnecting this loaner unit to plug my previous board back in.

Every one of the keyboard’s keys are backlight, and you can use the included Synapse software to tweak the color of that backlight to any shade you wish. Or, for that lava lamp kind of feeling, set it to spectrum cycling to have the keys rotate through many colors.

There are some standard keys that do special things, too. A dedicated Razer key turns on the app side of the Switchblade, letting you pick which app you’d like to run. The recording key lets you record macros, while the dedicated gaming key lets you disable the Windows key.

Under all of the keys is a really nice rubber wrist rest. It’s not raised or squishy, but it did feel nice against the base of my palms as I typed this review. It is fixed, so if you hate wrist rests, you’re out of luck here.

It’s all very nice, but $250 is a lot to drop on a keyboard with a built-in touchscreen and display buttons that you may not use that often. While the Switchblade side of the keyboard speaks to my technolust, my right hand was always on my gaming mouse during play, making me feel a bit guilty for not using the main draw of this accessory. I loved checking Facebook and watching YouTube videos on it, but that charm will probably wear off soon, and I’ll be back to using a proper-sized monitor to do those things.

Maybe the Switchblade side would be more useful if I played MMO or strategy games; I could definitely see assignable keys being useful in those cases. But even then, you’d have to take your hand off your mouse to access the Switchblade screen and buttons, as they’re fixed on the right side of the keyboard.

Is the Razer Deathstalker Ultimate the ultimate PC gaming keyboard? Maybe for you. For me, the best gaming keyboard is one with dependable WASD keys and a space bar that isn’t bouncy or noisy. I love the Switchblade trackpad and assignable buttons, but they’re a luxury that I can’t see myself using often enough for the outlay.