For the last couple of months, my fingers have been spoiled by using the Razer Ornata Chroma. The low-profile keycaps and satisfying tactility led to it being my keyboard of choice. But now Razer has released the BlackWidow Chroma V2, the next iteration in their popular BlackWidow line, so I had to tear my ‘tips away from the Ornata and try this one for review.

A lack of new features make it a less exciting endeavor for Razer’s flagship keyboard, but that doesn’t mean it isn’t as dependable and as comfortable as the word flagship implies. It’s definitely BlackWidow: The Sequel, and if you know you like this style of keyboard, you’ll probably be happy with it. 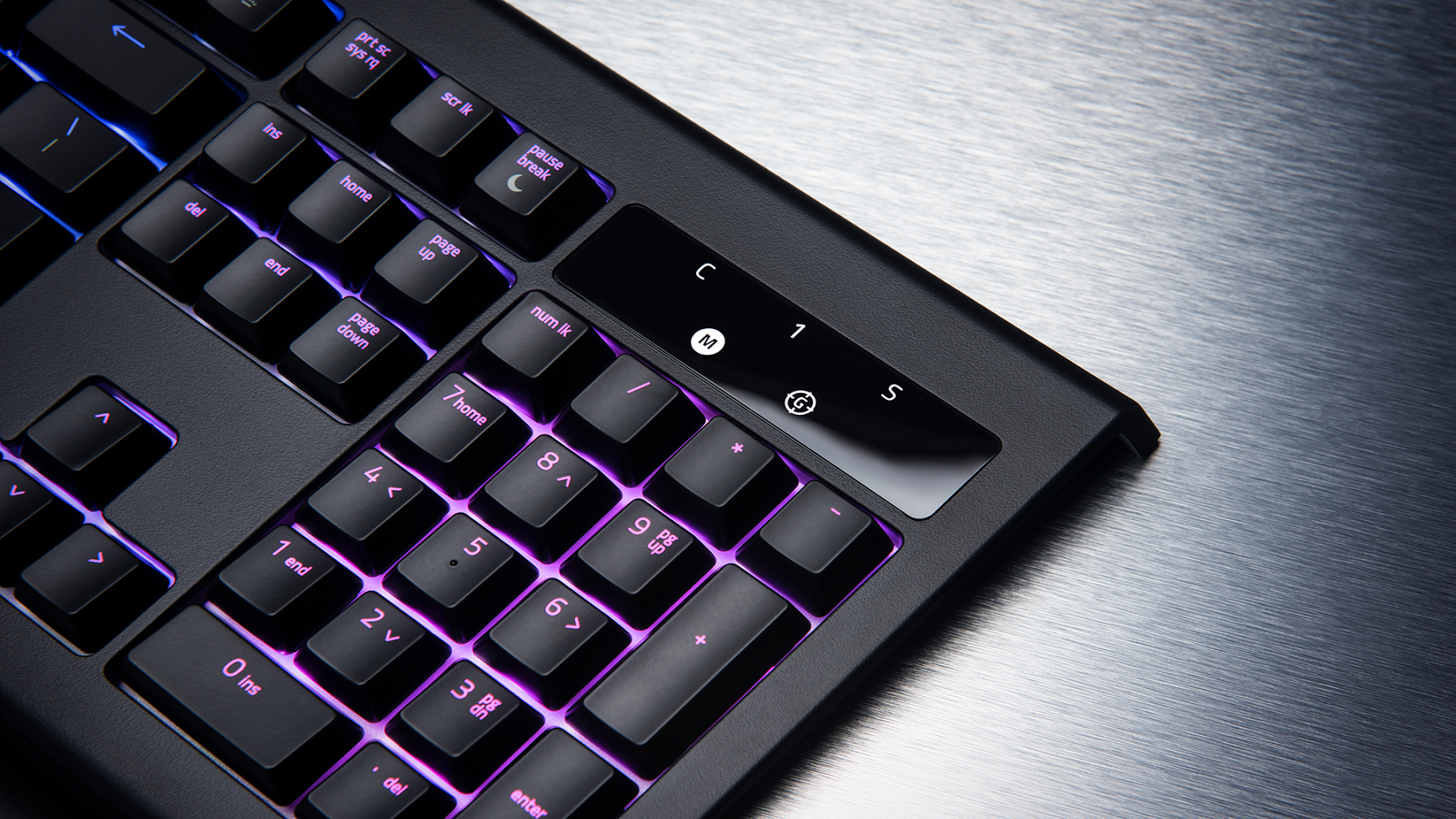 Let’s start with the design and the lights and the pretties. The BlackWidow Chroma V2 is sleek with a matte finish, 16.8 million color combinations for the RGB lighting (all customizable, of course!), and contoured key-caps that remained comfortable throughout all of my testing. Size-wise, it’s 475mm/18.72 in (Width) x 171mm/6.74 in (Height) x 39mm/1.54 in (Depth). It also comes with a detachable magnetic wrist-rest similar to the Ornata Chroma, and my wrists are ever-so-grateful. I’ve had others in the house try it out and they were put off by how high it is, but it’s the perfect amount of cushion for me. I use during both typing and gaming, and I can’t really think of a time where I wanted to remove it.

There’s a column on the far left side of the keyboard with five macro keys, which can be helpful in games that require more inputs, but I don’t like having them there at all. This is absolutely due to my preference, as I’ve seen people swear by those extra macros, but my pinky finger can never quite get used to there being more keys past Caps Lock. Your mileage will vary of course, but there’s definitely an acclimation period.

On the right side of the keyboard there’s a USB pass-through and 3.5mm headphone jack, which is always appreciated. The less I have to root around behind my tower to find connections, the better. The only keys I wish had been added for convenience’s sake would be a dedicated media bar with volume controls, but you can use the function keys to the same effect. 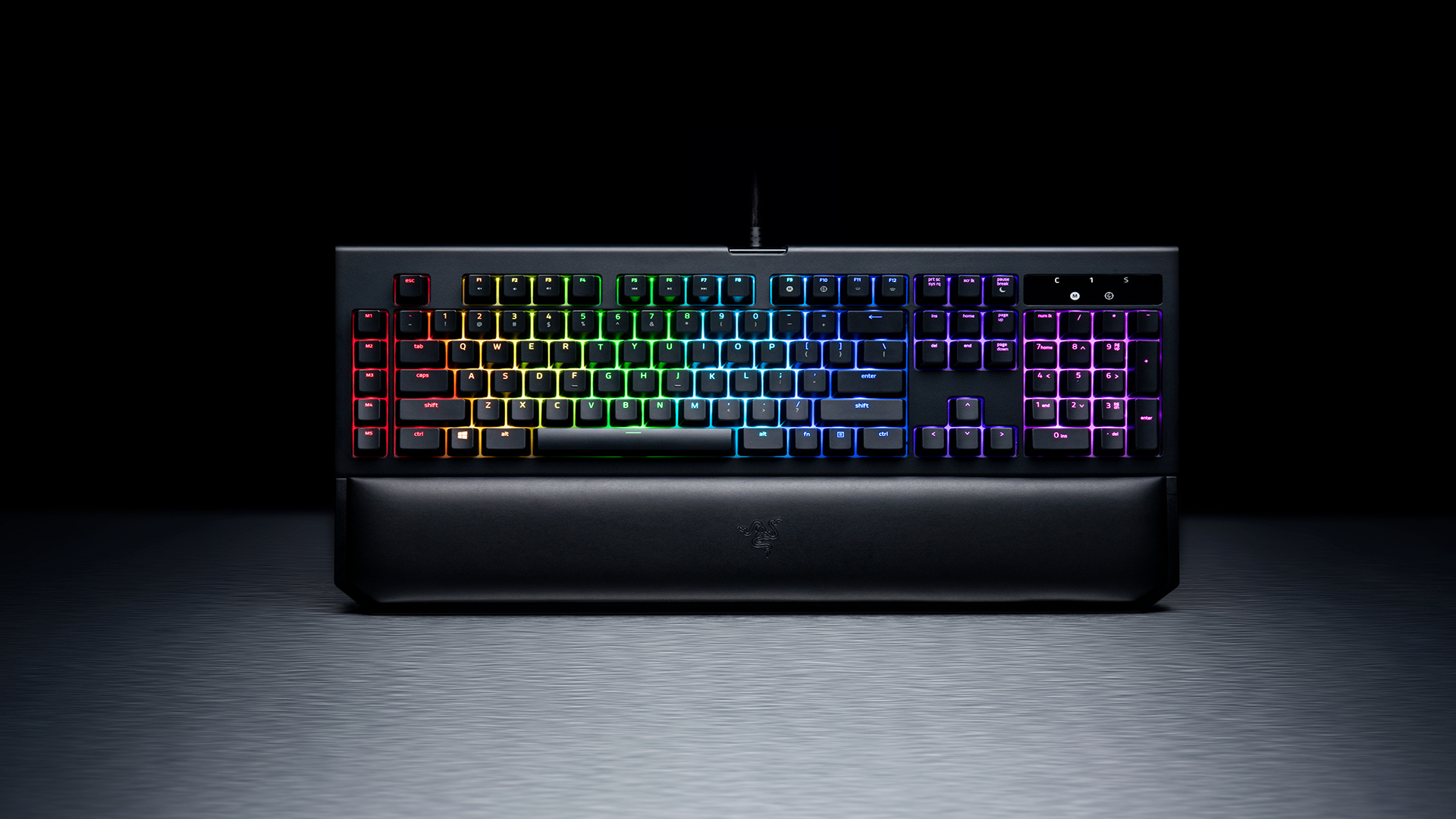 As far as what’s under the hood, BlackWidow Chroma V2 comes in three varieties: Green, Yellow, or Orange mechanical switches. The unit provided by Razer has Green switches, which are the company’s equivalent to Cherry MX Blue switches, providing an audible, tactile click. Yellow has less of a “bump” to it, making it a smart choice for people who play MOBAs and need to rapidly hit their keys. Orange is the middle ground, where you have some tactility but it’s a bit quieter.

The Green switches have that tell-tale click that most think of when conjuring up images of mechanical keyboards, and I have no complaints here. The keys themselves are rated at 80 million strokes, which means they should last you years and years, as long as you don’t spill your drink in it or throw it at a wall. Or break it in half, which I’d never do. Ten key rollover and anti-ghosting tech ensures that your keypresses will always register properly.

As expected for Razer, the company’s Synapse software handles all of the customization you could possibly want to engage in with your keyboards. Macros, custom lighting (mine looks like fire under my fingertips!), and stats to see how and where your fingers are flying in each game are readily available. Synapse is simple to use and free, so there’s no reason not to use it.

So it works well, looks good, and feels comfortable. The only thing that stops me from recommending to everyone is the price. At $169.99, the BlackWidow Chroma V2 can be a tough sell. It’s sort of the Lamborghini of keyboards in that it’s got (almost) everything you’d want from an expensive, luxurious typer thingamadooodle, so you’re definitely buying quality. I’d suggest getting your fingers on one at a PC hardware store if you can to make sure you like the feel of it before pulling the trigger. The only addition I’d want is dedicated media keys, but plenty of people don’t care an awful lot about that. If the features that are here sound good, know that they’re implemented well and your money will be well-spent.